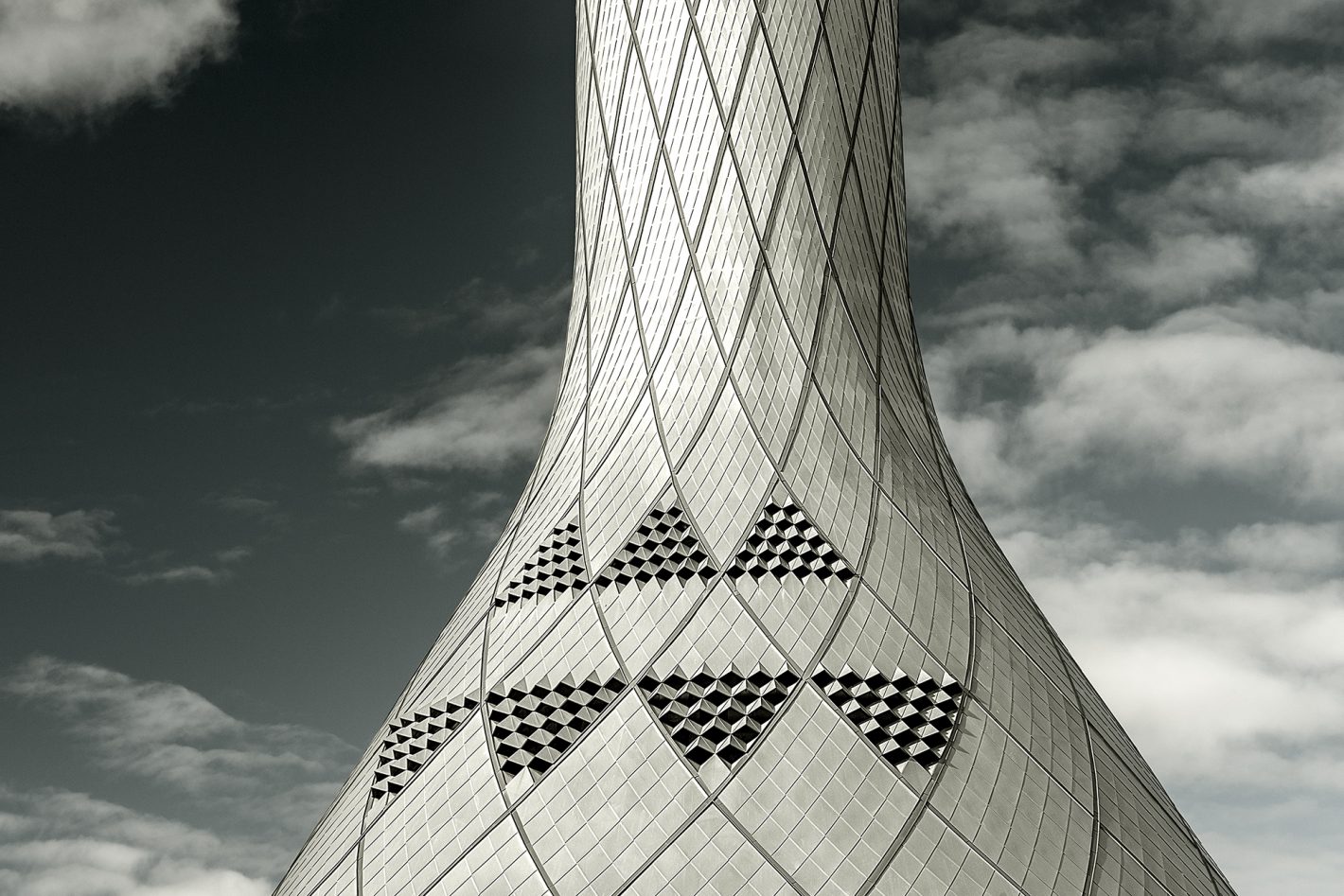 Edinburgh Airport, Scotland, United Kingdom, EDI/EGPH | Originally a military airport, Edinburgh Airport opened to commercial aviation in 1977. It is now Scotland’s second largest airport after Glasgow. Edinburgh’s new control tower took 15 months to complete and opened in 2005. It stands 57 meters (187 feet) high, which equals 12 double-decker buses stacked on top of one another. The exterior’s crisscrossed, double-helix pattern is not just for aesthetics. It also functions as a system of drainage channels. The 9,216 zinc tiles were hand-installed and have aged naturally in the outside environment, reducing the need for maintenance.

Carolyn Russo has a dream job. She’s the co-curator of the art collection at the Smithsonian in Washington, D.C., where she’s currently overseeing a total revamp of the art gallery, researching ongoing art acquisition, managing the Trophy and Poster collections and gets to fly all over the world taking photos. For the flippin’ Smithsonian!

One of these dream job duties led her to create Art of the Airport Tower, a photography exhibit currently on display at the Aerospace Museum of California in McClellan. Accompanied by a book of the same name, this exhibit explores historic and contemporary airport towers throughout the world—each portrait an inspiring glimpse into a universe we may never even think about as we float through the sky, snacking on pretzels and tiny glasses of cranberry juice (with vodka): the universe of modern flight.

I excitedly pepper Russo with questions about what her time was like with this project—it took seven years to complete the Art of the Airport Tower. Did she spend years traveling the world solo, jet-setting and hobnobbing with air-traffic elite? Yes, and no.

“It’s not as glamorous as it sounds,” she assures me. 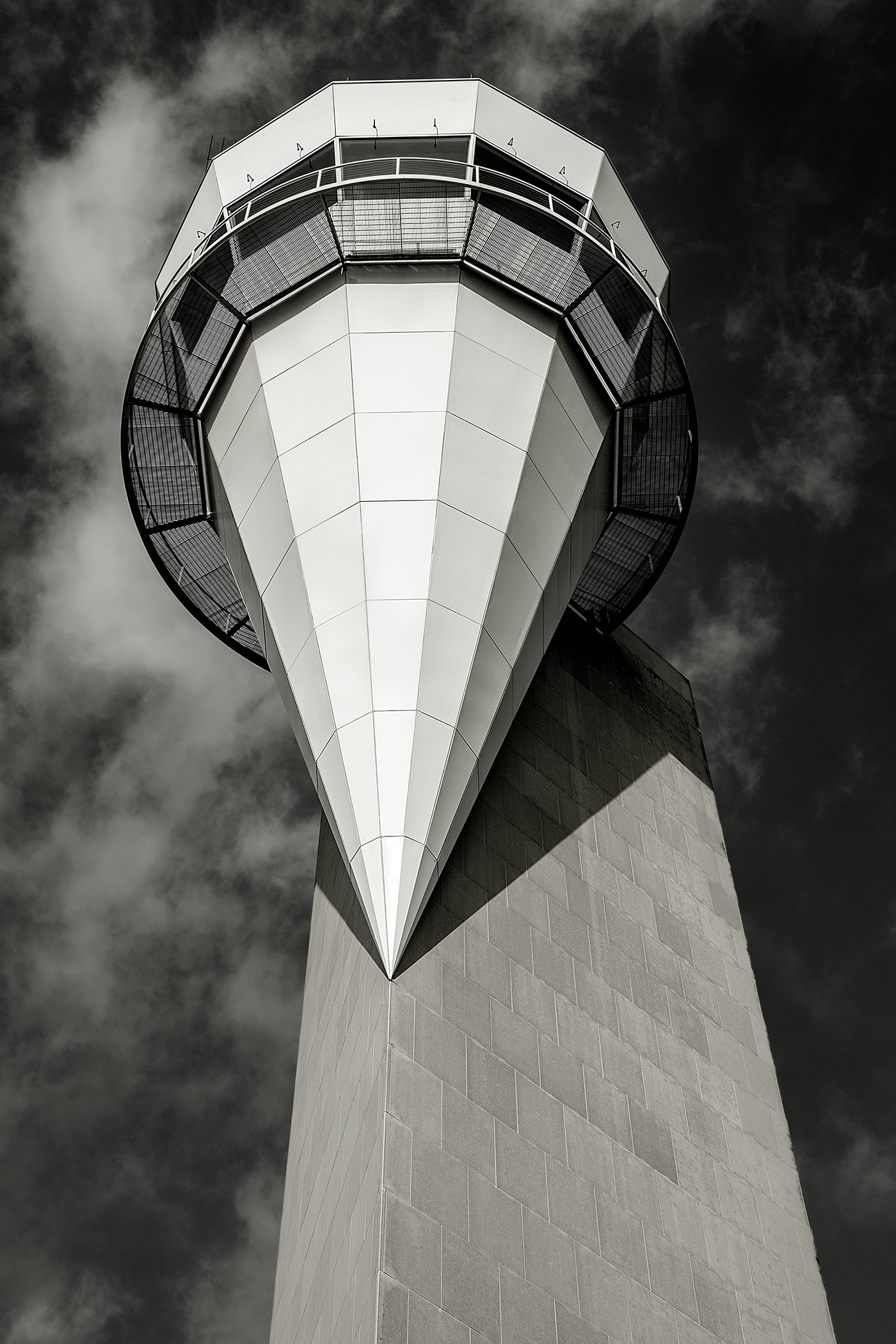 Fort Worth Alliance Airport, Texas, United States, AFW/KAFW | “Alliance” refers to the public-private partnership of the three entities responsible for designing and developing Fort Worth Airport: the Federal Aviation Administration (FAA), the city of Fort Worth, and Ross Perot Jr.’s company Hillwood. It is the world’s first 100 percent industrial airport—used for civil and military cargo, commercial, corporate, and other noncommercial flights. Situated on 485 hectares (1,198 acres), the airport’s runway can accommodate the world’s largest cargo planes. Albert Halff Associates designed the control tower, which was built in 1992. The cone-shaped feature, reminiscent of a bird’s beak, hides the tower’s microwave signal relay equipment.

Over the course of this time, she was also curating other art exhibits for the Smithsonian (including one to celebrate the recently passed Alan L. Bean, the fourth astronaut and only artist to have ever walked on the moon!), working on staff photography assignments and also raising two boys.

Russo was—and is—a busy lady. And when she was traveling to capture these airport tower photographs, she was doing it solo for budgeting reasons. Sometimes it was daunting, especially if the controllers didn’t understand her goal. She says that one location was hesitant to let her in.

“They were suspicious of me, they wondered why I found the tower so interesting because it just looked like ‘a block of concrete’ to them,” she says.

The officials allowed her in on the condition she show them all her photos before leaving. 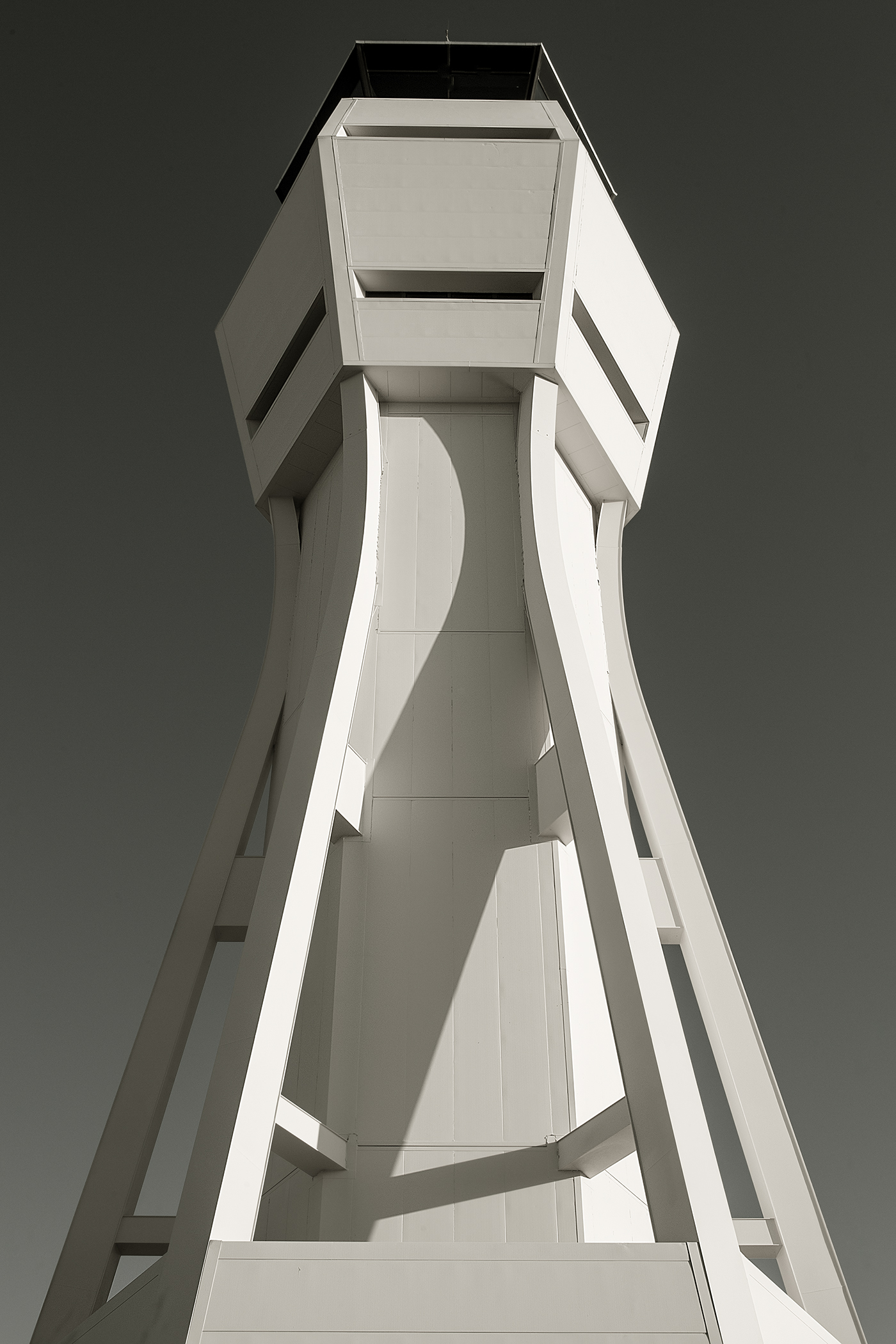 Edwards Air Force Base, California, United States, EDW/KEDW | Rogers Dry Lake in California’s Mojave Desert served as the Muroc Bombing and Gunnery Range in the 1930s. During World War II, the site became a training base. Later, new and top-secret aircraft were tested here. Edwards Air Force Base is home to many aviation “firsts” and countless records, and it served as a landing site for the Space Shuttle. The airport tower has two High Rise Escape Systems (HRES) for air traffic controllers in the event of an emergency. Each HRES consists of a harness shaped like an over-sized pant suit, and a descent device that lowers the evacuee safely to the ground.

“But by the end of it, we’d talked about kids, growing up, America—all the elements of life,” Russo says, “and when I left, they didn’t even look at my photographs!” 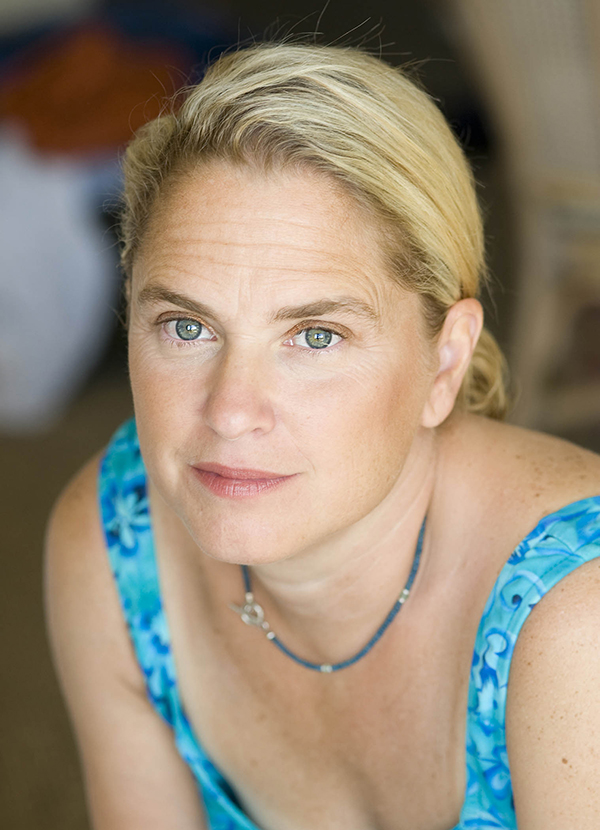 And despite these sticky situations, Russo says she enjoyed doing this travel alone.

“One of the benefits of traveling alone is that you have a lot of freedom and can make your own schedule, which I needed for this project, because some of these trips I needed to fly in and fly out as quickly as possible—most people might not want to do that,” she says. “But if I was in a location where I knew someone, I would have a place to stay, have a meal or round up help!”

She says that one of her friends from high school who now lives in France drove her to the airport for a photo session. When it started pouring rain, she held the umbrella while she took photos.

Now that is friendship.

And speaking of friendship, another thing Russo notes is the camaraderie between airport traffic controllers. They are a network of people who “speak the same language of airplanes,” she says. “They have a passion for flight. It was like one big family. I could be anywhere in the world, but when I was around the folks at the tower, it felt like home.”

But where did that “home” feeling originate with Russo? I had to know: what drove (flew?) her to choose a life of travel photography, specifically aviation? She recalls an early photography assignment as she was getting her BFA in Photography at the Massachusetts College of Art in Boston. 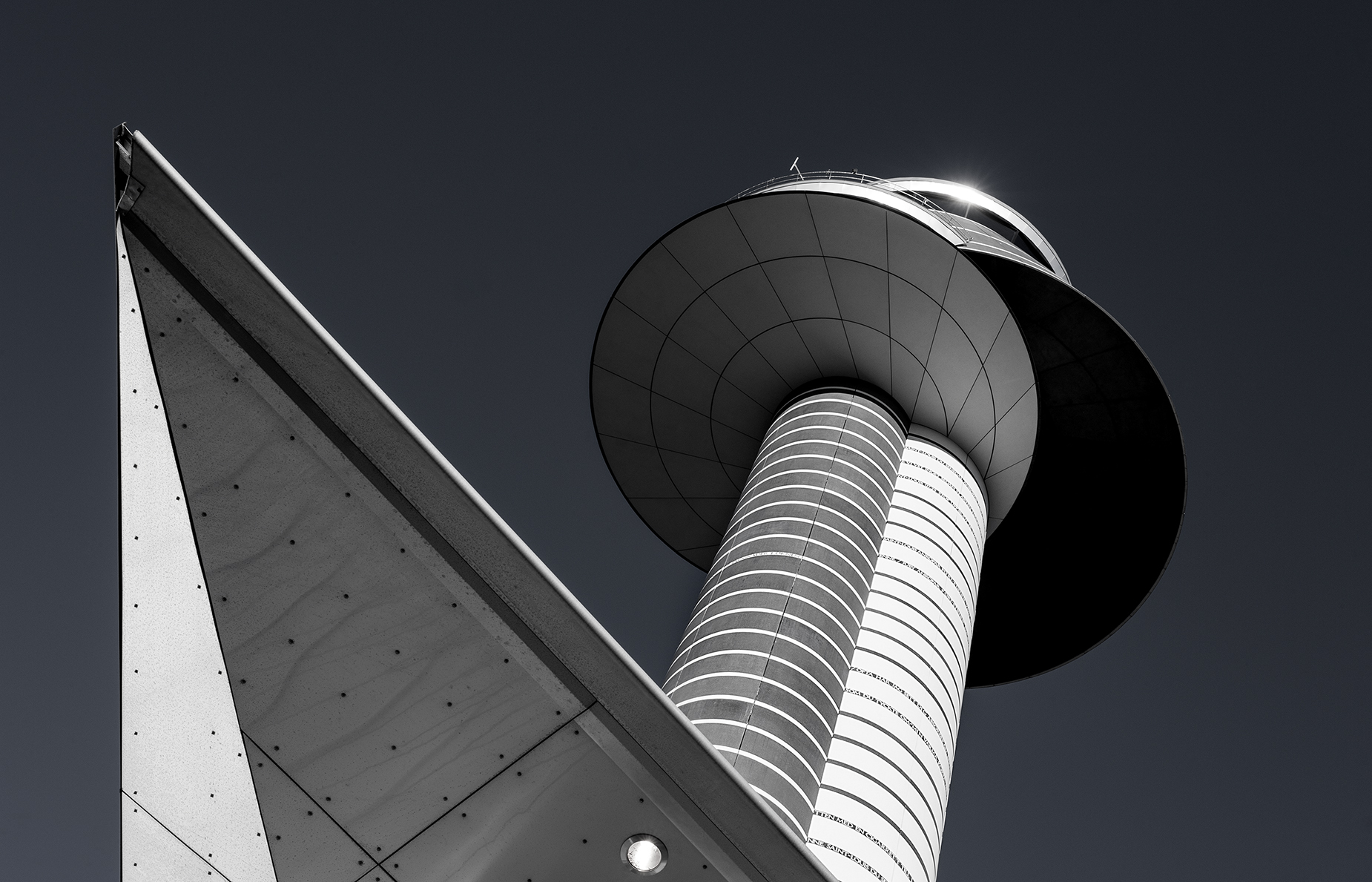 Stockholm-Arlanda Airport, Sweden, ARN / ESSA | The Stockholm-Arlanda Airport control tower is probably one of the first to double as a wedding location, where couples can pay for a marriage ceremony. Designed by Gert Wingårdh, the 83-meter (272-foot) tower was completed in 2001. There are two control cabs, perched like birds atop the shaft. They symbolize Hugin and Minun, two ravens from Nordic mythology, who were sent out to watch over the world. On the black and white bands, Finnish artist Silja Rantanen superimposed 2,500 words from Antoine de Saint-Exupéry’s classic 1929 aviation book Southern Mail.

“I remember photographing a map with an airplane on it, and a string of pearls,” Russo says. “But [aviation] wasn’t really a part of my life until I began working in the dark room of the photo lab in the National Air and Space Museum in Washington, D.C. That’s when I realized I could merge the art and aviation worlds together.”

But she says her true “lightbulb” moment came in the early 1990s (before internet, when you actually had to do research with newspapers and word-of-mouth), when she decided to photograph contemporary women pilots, some of whom took years to contact. Russo recalls one in particular, whom she wasn’t able to find until the pilot became pregnant—and thus temporarily grounded long enough to reach.

“What I found was that I was incredibly inspired by the women I met, and I feel like that project was not only an inspiration for women across the board for role models, but for me, I feel like I gained the most out of that project just getting to know these people and hearing their stories,” Russo says.

For her book Women and Flight: Portraits of Contemporary Pilots (1997), Russo selected each woman based on her accomplishments, but the variety was astonishing: These women ranged from ages 11–86 and were airplane pilots, crop dusters, balloon operators and the first-ever U-2 spy plane pilot (Troy Devine, represent!), to name a few. 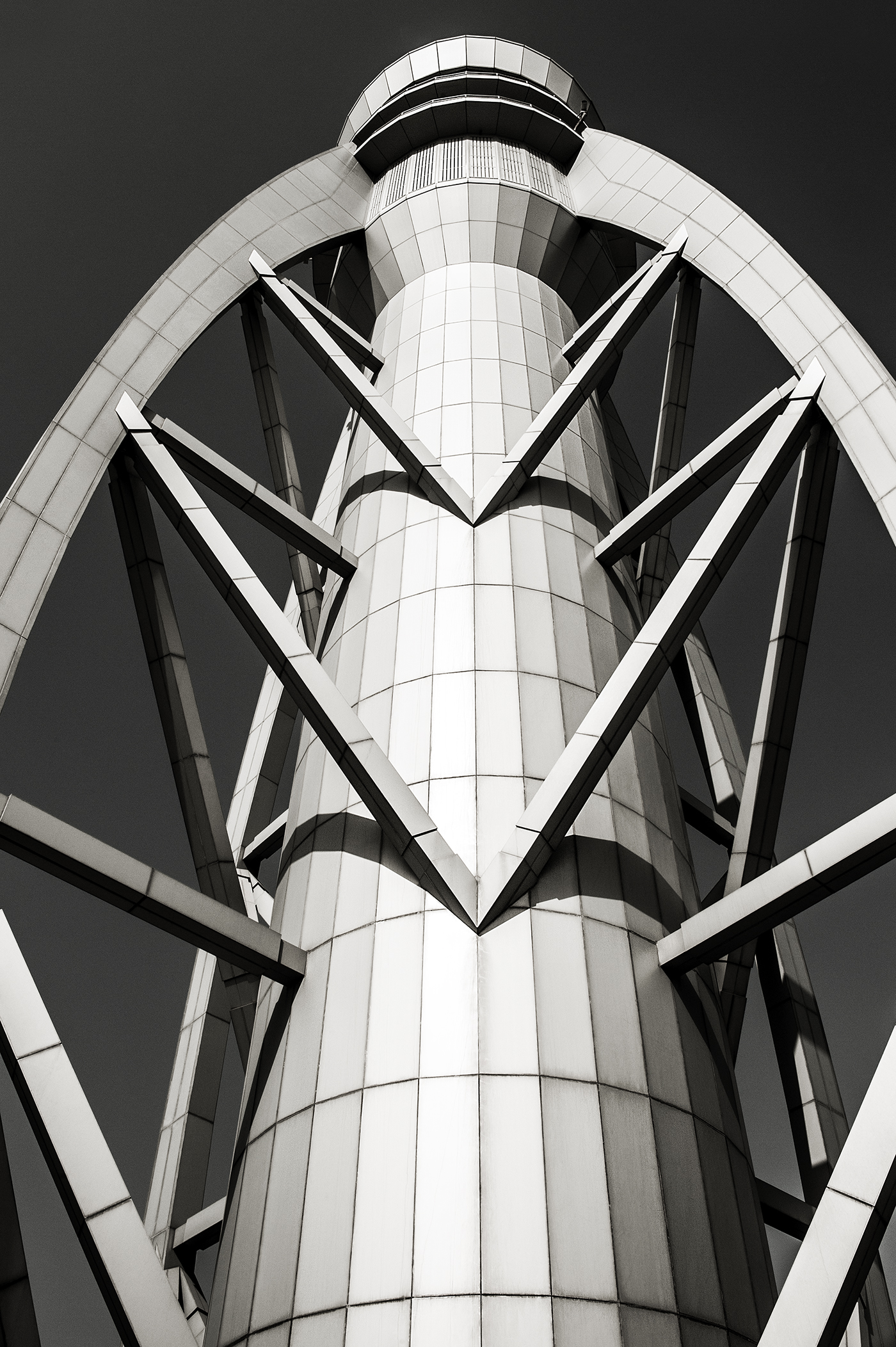 Dubai International, United Arab Emirates, DXB / OMDB | Dubai’s airport began with a terminal, fire station, and single runway of compacted sand. It has steadily grown to emerge as one of the world’s major airports. It now has two CAT III B instrument landing systems for low visibility conditions and runways large enough to handle the Airbus A380, the world’s largest airliner. The 87-meter (285-foot) air traffic control tower, with its buttressed center column and arched wings, resembles a futuristic avian sculpture. A multilevel control center crowns the tower, with Dubai Air Navigation Services operating from its perch.

“A lot of these women didn’t have role models and they were groundbreakers in their field,” Russo says. “It was an honor to work on that project.”

And this is when I think: couldn’t we say the same for the airport towers? Each an inspiring figure, beautiful and strong, guiding us to safety in one way or another?

Before entering the gallery for Art of the Airport Tower, Russo’s artist statement notes that the airport tower is, “an essential aviation artifact and a vessel with a powerful presence watching over the vastness of the airport and sky; a nonjudgmental cultural greeter; a choreographer or conductor; a mother bird caring for her flock.”

And if we never thought to thank them before, we should now.

Open now through September, Art of the Airport Tower can be seen at the Aerospace Museum in McClellan, which is just a quick jaunt down Interstate 80 in North Highlands. After seeing Russo’s exhibit, do not miss the chance to see an inspiring display of retired planes from yesteryear and meet a few of the friendly museum docents, who will give you fun facts about the planes if you’re lucky … or just nice. I didn’t know about this museum before Submerge asked me to visit, but now I have a new favorite place to dream and be inspired by the past, present and future—in so many ways. And I think you will be, too.

“It’s a new perspective,” says Russo. “I think it will change the way people think about flying—forever.” 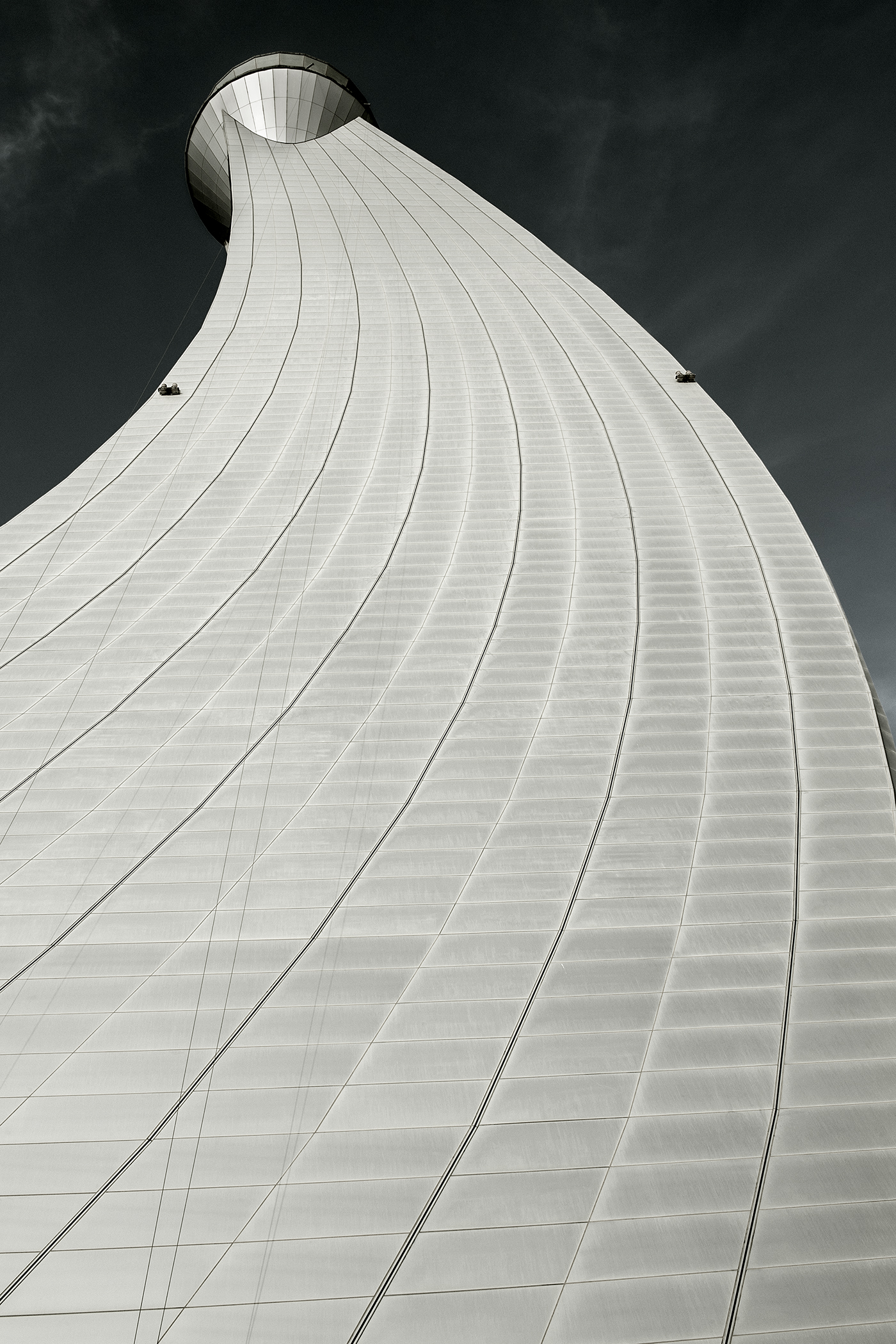 Abu Dhabi International Airport, United Arab Emirates, AUH / OMAA | This is the only tower in the world that takes the form of a crescent. At 109 meters (358 feet) tall, it stands between parallel runways. The crescent design stems from the area’s maritime heritage. It represents the sail of a dhow boat, a cultural icon and welcoming symbol to visitors. Abu Dhabi International Airport opened in 1968 on an island just off the Arabian Peninsula. A new airport opened on the mainland in 1982. Some 126 million passengers have traversed its halls.