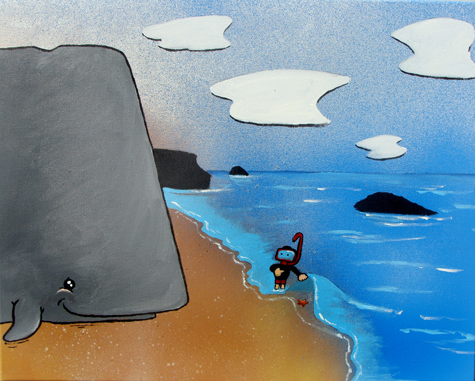 Maybe it’s just a negative stereotype that creative people—you know, musicians, artists and people who go out and get drunk alongside musicians and artists—just aren’t morning people. Artist Jared Konopitski, a Midtown boy, born and raised, was waiting for our phone call at 9 a.m—bright-eyed, bushy tailed and sounding rather chipper. So maybe he is a morning person, or maybe it was the sugar high from the bowl of mango ice cream he’d just eaten. Ice cream for breakfast—he is an artist after all.

Artist is perhaps too narrow a term for Konopitski. Polymath may be more apt. Colored pencils, paints, photography, pencil and ink, Shrinky Dinks (huh?) are just some of the media he’s used during his career. Often, these different media will blend and bleed into one another in Konopitski’s work.

“It’s something that I would say I’ve always done as far as multiple mediums,” he says of his artwork. “They crossover as I learn more mediums. I just get bored, I guess, so then I try to explore, and then I come across something like Shrinky Dinks, and then they come together and it creates all kinds of eclectic work.”

This sort of mixing and matching has made Konopitski’s work not so easy to categorize, even for the artist himself, though he says he tends to lean more toward tattoo culture, cartoon and comic art—and, though he’s a bit loathe to say it, lowbrow culture.

“I think [lowbrow] was a term created by that culture, and in retrospect, they wish they hadn’t come up with that term,” Konopitski says.

Whatever you call it, there’s no denying the charisma of Konopitski’s art. Whether it’s brightly colored illustrations, real-life photographs enhanced with his goofy characters, or the painted Scotch tape sculptures he created in collaboration with Danny Scheible, Konopitski’s work speaks of a limitless imagination and exudes a fun, lighthearted vibe. His latest solo show opens April 2, 2010 at Cuffs Urban Apparel in Midtown. When Submerge spoke with the artist, he was taking a much-needed break from preparing for the exhibition. He says he hopes to have 30 pieces done in time for the show. The works he’ll have on display will be mixed media pieces involving spray paint, vinyl records and Shrinky Dinks. Konopitski says that a few samples of the pieces can be seen on his Facebook page, but he urges those who are curious to check out the exhibit for themselves. We here at Submerge believe you should do the same. It’s a bizarre mixture of materials to be sure, but you know how those artist types are”¦ 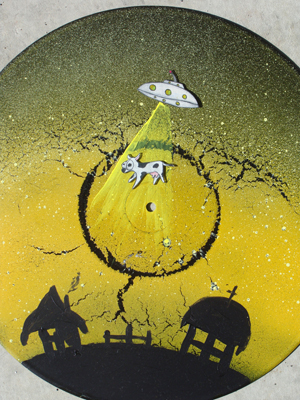 Are Shrinky Dinks something that you grew up with?
My mom actually introduced them to me. She pulled out her whole antiques there, her charms, and was showing me these little Shrinky Dinks, and I hadn’t heard of them since then.

I didn’t realize they still made them.
I actually ran into a place that was selling blank Shrinky Dinks sheets—just blank sheets like paper. But yeah, I just started making them myself and cutting them out. They’re awesome.

Does the medium you’re working with inform the artwork at all? Does it shape how you create a piece?
Absolutely. Say if I’m working with pen and ink—I don’t know if you’ve seen the tribal works I do—but they become more tedious, more detailed. If I’m working with colored pencils or Shrinky Dinks, they become more cartoonish. I made these sun prints”¦ That’s a whole different technique right there. Those result in creating cutout, silhouette styles and putting them on this paper that’s been chemically laced to react to the sun. So the medium dictates the style I’m going to do. 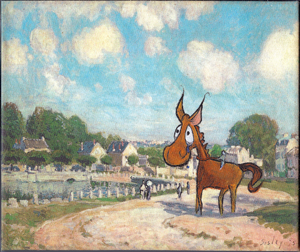 Has working as a curator opened your eyes to how to present your work to other curators?
It helps with networking, I’d say, because then you’re working with other artists, and you’re giving back to them a little. As they find other shows that they’re curating themselves—I’ve found that a lot of artists, once they’ve been showing for so long, they’re also asked to put on shows as well, and they’ll say, “Hey, he gave me a show, why don’t I get him involved too.”

Was it something you went to school for?
I graduated with an AA from the community college, and I was going to move on to the Art Institute, but it seemed at that point that school was going to distract me from what I wanted to do, looking at the students’ work and such. Some of my favorite artists didn’t even go to school. They were all self-taught, so I thought I would save some money and not get all those student loans and try it myself. 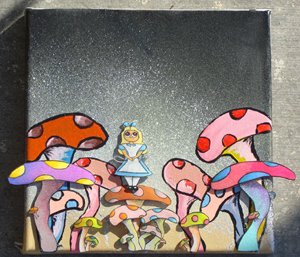 We were talking about how the materials you use inspire your artwork. How did working with Shrinky Dinks and records shape your work for this upcoming exhibit?
As far as that goes, it’s kind of a new medium working with acrylic and Shrinky Dink combined. These are the most I’ve done in that way, I guess. They’re all vinyl records, so they’re all circular canvases, and for some reason, I don’t know if it’s because it’s a different shape, but it’s inspired me more than a square canvas. I can’t stop coming up with ideas for it. It’s been a blast. I have more ideas than time.

Has it been a lot of trial and error working with the Shrinky Dinks? I remember when I’d put them in the oven, they’d get all curled up.
This is true. In fact, I didn’t even know that they got so curled up so much at first, so I would take them out of the oven and they’d just be round, curved balls of plastic. I almost gave up, but then I read the instructions, which I don’t do too often, and it actually said to leave them in there longer and they’ll flatten out. I guess that helped out there. 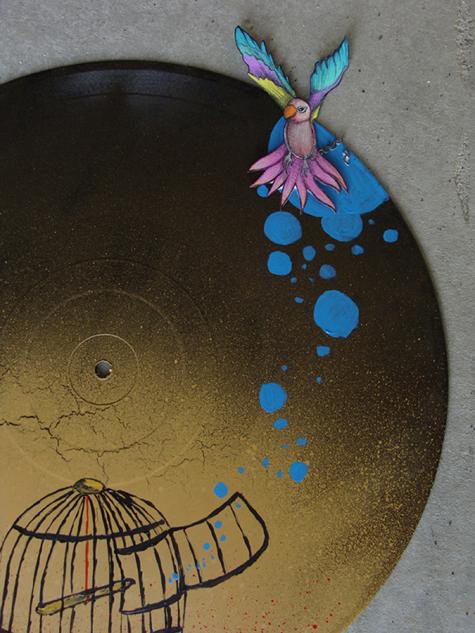 What excites you most about working in the Sacramento art community?
What excites me most is that the artists are so talented. The city is full of talented artists. But what the city doesn’t know, and I didn’t even realize this until I started showing art more, is there aren’t only immensely talented artists, but there are also people who are either traveling through or live here and don’t want people to know that they live here who are big in the art world. There’s folks who have been shown in Juxtapose, High Fructose and those art magazines; there are folks who’ve worked for DC Comics and Marvel Comics, there are folks who know people who make the Cartoon Network shows and Pixar and stuff. I had no idea I’d get to meet these people. I thought I’d show some art in the little town I grew up in, but I had no idea Sacramento secretly harbors these people. 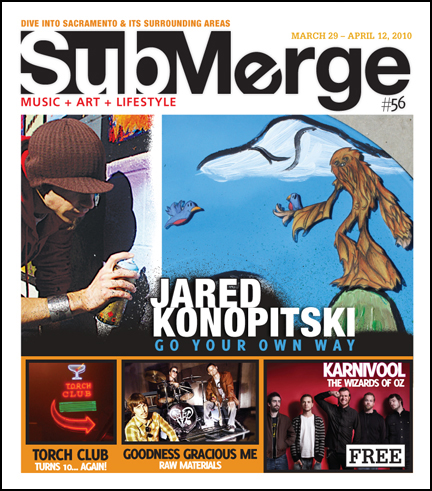 Check out Jared Konopitski’s work at Cuffs Urban Apparel starting April 2, 2010. For more information, go to www.jareko.com or look him up on Facebook at www.facebook.com/ people/Jared-Konopitski/838283475.