Changelings of Intuition: 1810 Gallery Displays the Dynamic Ceramics of Clarissa Pezone in her Exquisite Corpse Collection 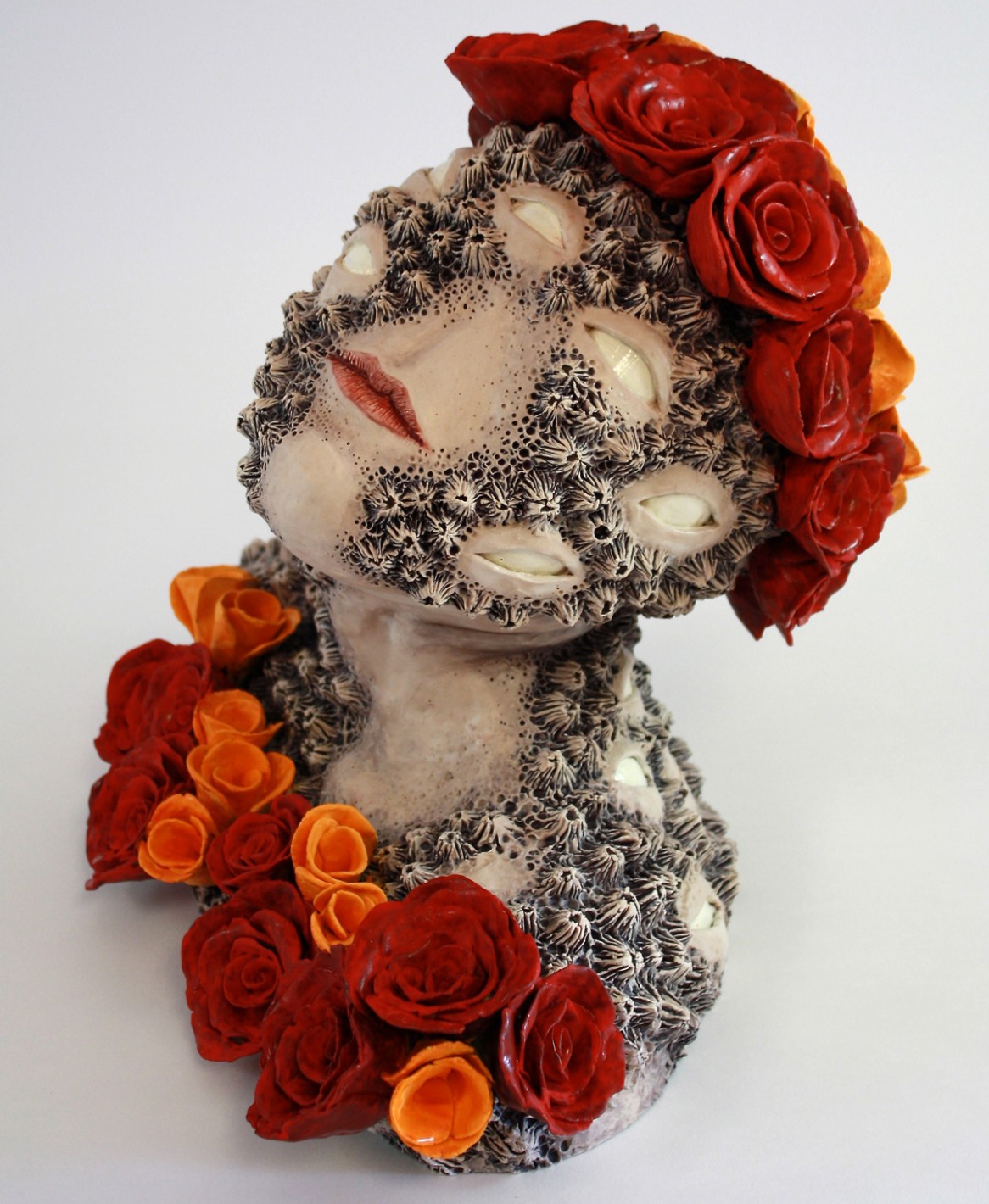 “Baroque” is a term of towering richness. Often, we take it as a descriptor for any number of classicist tropes, those that bring to mind images of ornate and harmonious displays of decorative order. But there is another, antiquated half of the definition, taken from an old jeweler’s term referring to pearls of irregular shapes. It describes the mineral’s tendency to transgress any imposed notions of order, to twist into any shape its inner life compels it toward. In the natural world, the baroque is something bizarre, even grotesque. It is the art of the coral reef, where strange creatures grow, bloom, burrow and colonize across any hospitable surface.

I’m reminded of this when gazing at Black Widow, one of the newer earthenware sculptures by Clarissa Pezone. It is the torso of a woman, gesturing delicately upward in a state of repose, quite human-like, by way of the sea nymph or the arachnid. Her skin is blooming with plants, desert flowers, spiders and barnacles, and a dozen glowing-white eyes. It is an alien re-imagining of The Birth of Venus. Across the room, a cactus emerges from the protective cocoon of a human body; miniature vessels and mugs sprout rows of realistic teeth, jarring but elegant, like the anthropoid stand-in for pearls in an ancient inland kingdom.

Each item in the showing is startlingly realized, even though Pezone is still in the thick of her own artistic discovery. Exquisite Corpse, the artist’s latest exhibit at 1810 Gallery, is a feast of different techniques she has been working on over the past year or so, all to success. The few constants in the items on display are the medium—ceramics and the mastery of texture.

Some of her newer pieces eschew the phantasmagoria of her surreal work for a brilliant human realism, some of them the product of a workshop she recently took with world-renowned Tip Toland. Pezone is a true seeker, whose work is full of beauty, humor and otherworldliness in equal measure.

We took the chance to visit the artist and her creations in person at 1810 Gallery, where they will be on display until the end of the month. We learned about the goals, themes and imagery that keep her artistic gears furiously whirring. 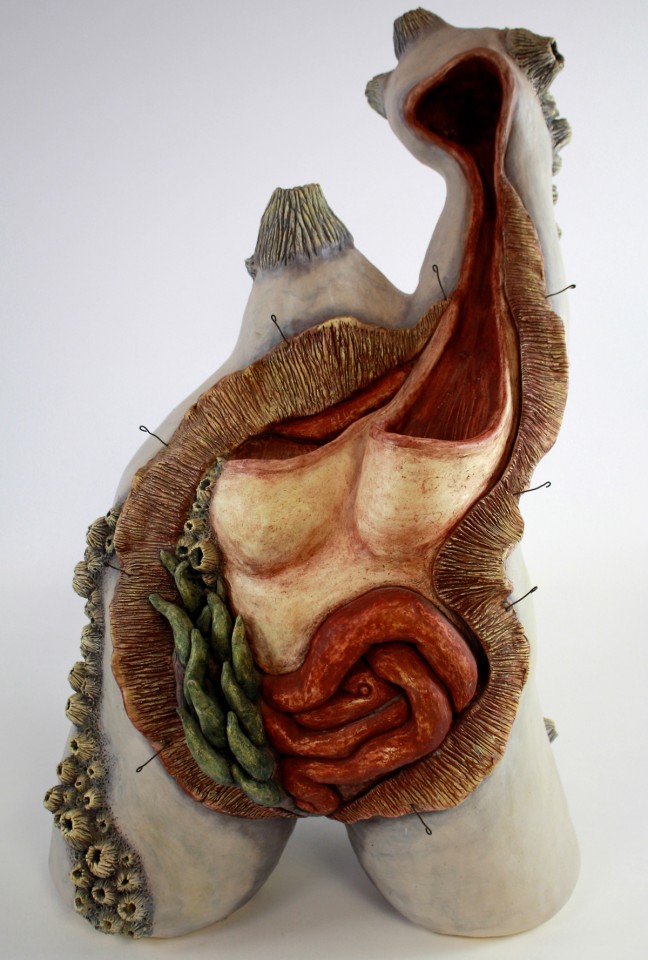 How did you get your start, what materials do you use and how would you describe your style?
I’ve been working with ceramics for about seven years. I got started at Humboldt State, kind of accidentally. I just went to a [sculpture] class and I really liked it. I use two different kinds of clay and firing processes, so the sculpture is first made with a low-fire sculpture clay, and then the high-fire stock is made of porcelain. I’d describe my style as surreal and figurative. I’m interested in texture and the process of making textures. In the work I’ve been making in the past year, I have been focusing mostly on surreal portraits—busts or half figures—that relate to the idea of growth and decay. I think there’s something interesting about an object being both beautiful and ornate, as well as grotesque, abject and off-putting. I am aiming for the gray area in-between. 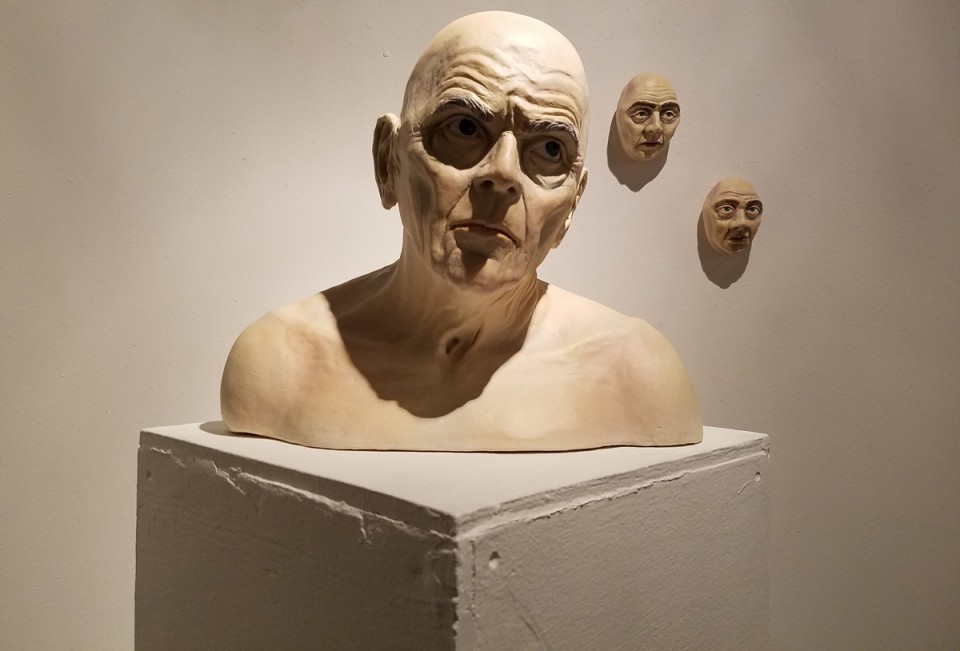 Do you have a favorite piece in Exquisite Corpse?
I’m torn between the last two I made before the show. This one [bust of a grumpy man] is my favorite because it’s a new technique I’d never tried before, which I did in a workshop with Tip Toland, who’s one of my heroes. I really admire her, and it was fun to build in a different style, too. The other ones are all built using coils, so they’re hollow, but this one I built solid and hollowed out afterward. I was trying something new and working from a model, which is much better than trying to imagine anatomy. My next favorite is that one [cactus lady sculpture], which is more surreal. That was my first time doing mixed media, putting the nails on the surface of the cactus. The clay had a mind of its own, too. I was building the body for her and it was kind of slumping a bit, because I was trying to build too fast, and then I thought, hmm … “I kind of want to make that into a fat roll [laughs].” I trust my instincts. 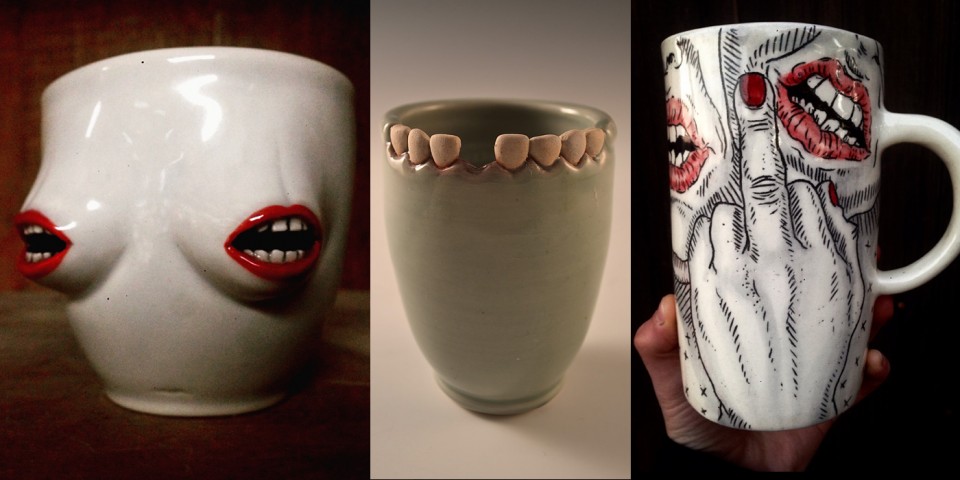 The items that stood out to me at first were these coffee mugs with a human teeth design. How did these come about?
The tooth mugs were one of the first things I started making in ceramics. The earliest ones I did were so shitty. They’re really funny to look at now. They don’t look like teeth—more like little piano keys. Just slowly over time, I started honing in on it. I just like teeth as objects, when you take them out of their context and put them somewhere else, they have the potential to look interesting. Also, when you drink coffee out of them, the coffee actually stains them like it would your teeth. It washes off afterward though!

How did you pick the title for your show?
Exquisite Corpse is a famous game that the surrealists used to play to generate ideas. It’s where you take a folded piece of paper and write or draw a story or picture fragment. You could draw a person, with the head, shoulders, and the rest of the body drawn by four different people, and come up with this weird monster of different elements, because you have no idea what was drawn by the person before you. The term just had a ring to it, and it seemed to make sense on some weird level, because it’s a bunch of wildly different works put together that might not make sense. They’re kind of alien sometimes. 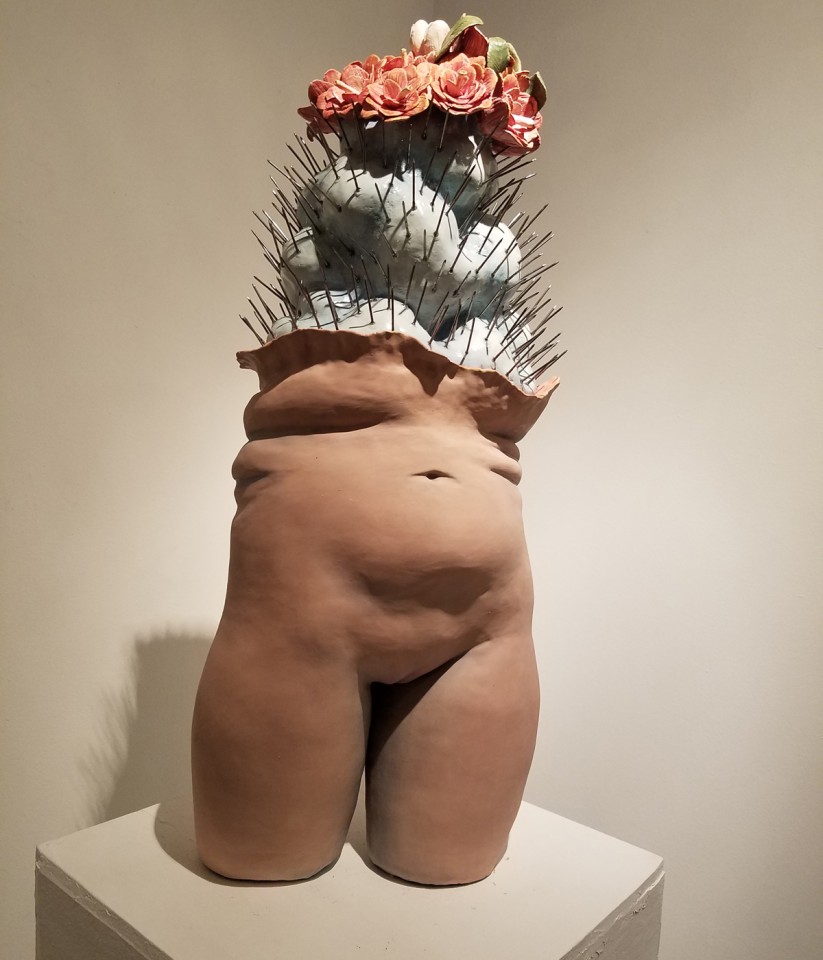 What draws you to the themes of anatomy, and being taken over by other life forms?
A lot of the images I look at are the anatomical drawings and medical cross-sections, especially with the older stuff, that was based more in drawing than in actually sculpting with three-dimensional objects. The “blooming” effect only came about in the past year, I think. I lived up north for about seven years, and for some reason I wasn’t making stuff with flowers or barnacles up there, and then I moved down here, and for some reason, the oceanic theme took over. I think it’s because I really admire the work of Jason deCaires Taylor, who makes cement casts of people and places them underwater—you might have seen them, like figures holding hands standing in a circle. I was looking at images of them after they’d been underwater for years, the amount of life that accumulated and how beautiful it was, so maybe that was part of the reason that my pieces started looking like they were being “taken over.”

What are you focusing on in your art in the near future?
Right now I’ve been thinking more of portraiture and mixed media. I’d like to continue to get better at making the figure better and more realistic. I’m just trying to build things solid, and really hone in on making things convincing as a human body. I’m not that interested in making hyper-realistic figures, like Ron Mueck, where you walk in and it actually looks like a human body, and you’re like, “Whoa! That’s disconcerting!” I still want it to look like it’s clay. I like the idea that it’s convincing enough so you can look at it and relate on a human level, but not on an uncanny level. I’ll still keep it surreal. 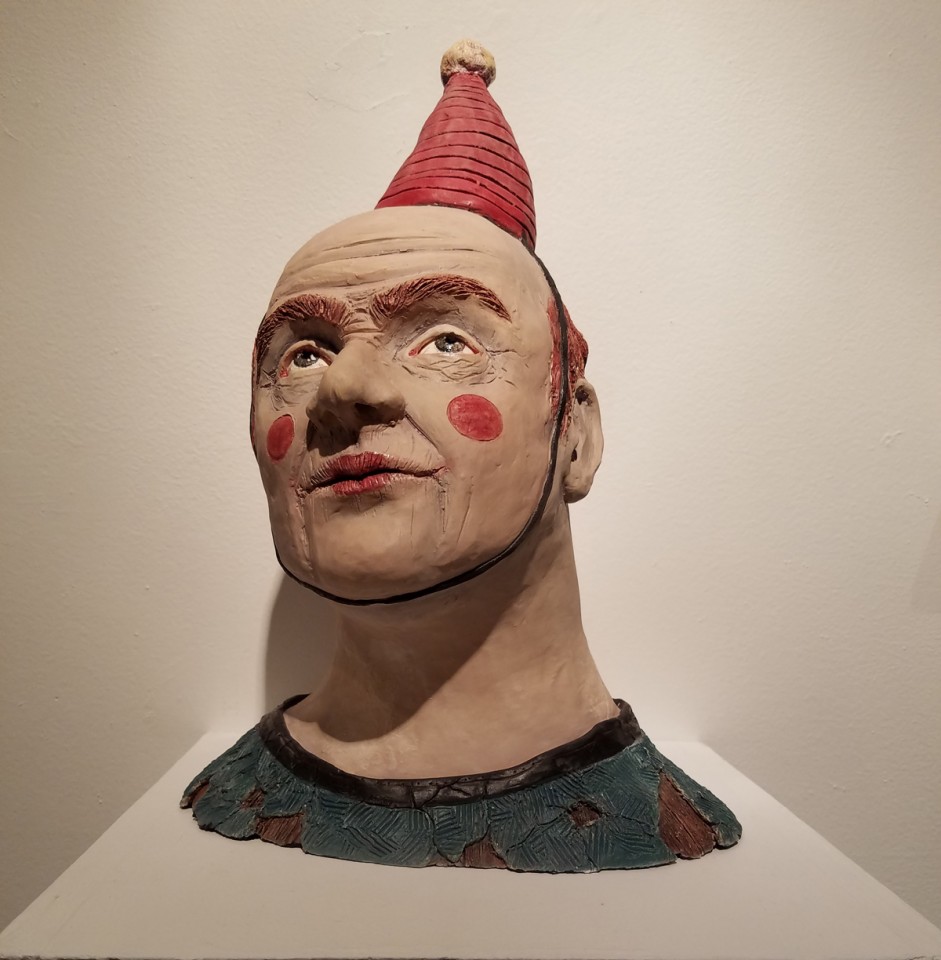 Stop by 1810 Gallery to see Exquisite Corpse for yourself while you still can. The gallery is located at 1810 12th Street in Sacramento. For more info go online to Facebook.com/1810gallery. Clarissa Pezone and 1810 Gallery will also be hosting a mug-making workshop at Panama Art Factory (4421 24th Street, Sacramento) on July 23, 2016. Tickets for this event are $35 and can be purchased through Mugworkshop.eventbrite.com. For more on the artist, check out her website, Clarissapezone.com.