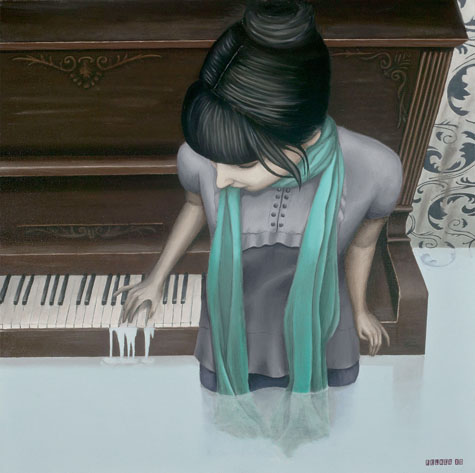 Literature majors, by nature and necessity, are fixated on written language. Jeffery Felker would appear to be no different. He holds a master’s degree in English literature from Sacramento State, where he also completed his undergraduate studies, and currently works as a part-time adjunct English professor at American River College. It should follow that in his free time, Felker is most likely hunched over a keyboard (perhaps an old manual typewriter, if you’re a romantic), meticulously writing well into the wee hours with designs on authoring the Great American Novel. However, that’s not the case. For Felker, the brush has won out over the pen as his tool of choice in forging his artistic vision.

“I do write, just not that often,” Felker, a Sacramento native, admits. “It’s something more like, hey, I’m in the mood. I’ll do it. But that’s as far as I’ll go with writing.”

Felker earned a minor in art studio while an undergrad at Sacramento State, and it’s served him well. His latest series, The Poetics of Music at Sea, contains 16 pieces (11 paintings and five drawings), and recently opened at the Union Gallery on Sacramento State campus on Oct. 4, 2010. It’s a solo show, and his first at the Union, as well as his first solo show in a couple of years. Felker says he was pleased with the opening, which he estimates drew 60 to 80 patrons–certainly a respectable welcome from his alma mater. However, the humor of debuting his latest series of paintings at the school from which he holds a master’s in literature is not lost on him.

“It was kind of weird,” Felker says. “I got my BA and master’s there, so it was like, ‘Shouldn’t I be coming back for a dissertation on an English thesis?’ It’s kind of ironic, right? I didn’t major in art there, and yet I’m showing there. It was kind of funny.”

While his creative focus is on his visual art, Felker has not abandoned his literary background. The Poetics of Music at Sea is inspired by the writings of the great American poet Walt Whitman. The titles for the pieces in the series were taken from lines from Whitman’s poems. Originally, the series was meant to encompass the work of several different poets, but Felker decided paring the number down to just one would deliver a more “powerful message.”

“It had been a year since I’d actually reinvested time in English and literature, because I was spending so much time prepping for my classes,” Felker says of his decision to focus solely on Whitman’s work for The Poetics of Music at Sea. “I re-found my desire for that kind of literature. I was really digging his stuff. I found so many great quotes, it was like, this guy really spoke to me.”

The Poetics of Music at Sea will show at the Union Gallery now through Nov. 4, 2010. Felker has a couple of group shows on the horizon that will take place in Southern California early 2011–one in Venice and the other in Anaheim, which will have a “circus theme.” He says he’s also planning to co-curate a show with his friend Glenn Arthur from Orange County, Calif. Felker says he has four artists other than himself already lined up and that the show will be “a revitalization of fairy tales” that will take familiar stories re-appropriated by a certain Mouse for mass consumption back to their darker roots. He hopes the show will debut in early 2012. In the following interview, Felker clues Submerge in on his background and the thought process behind his current series of paintings.

The name of your current exhibit is The Poetics of Music at Sea. I thought it was interesting that you used sea imagery in the title, but Sacramento is sort of a landlocked, valley city.
It’s sort of iconic, the sea. There’s a lot of association with the sea in English, at least in my background in English. My concentration was in 19th Century literature. Seafaring was sort of a popular topic in the Victorian era.

The main connection there is with Walt Whitman. The sea is an image, at least for Whitman; water imagery in and of itself is an ode to the power, the birth that water can bring. He was very into earthy things and nature, and he was always commenting on those things in his poetry. I’m kind of concentrating on water as an opposite, as more of a negative.

When did you discover Whitman? Was it through your studies or was he a writer you connected with prior to your time as an English lit major?
I’d heard about Whitman. I’d read a few of his poems, but it wasn’t until my undergrad work, where I was really required to dig into his poetry, that I got really connected to what he was talking about.

Was there a poem in particular that really clicked for you?
Probably “I Sing the Body Electric.” I had to read so much of it, you know what I mean? [Laughs] When you look at Leaves of Grass, there are parts of it that kind of stick out. That’s what I was going with here, too, these specific elements that were speaking to me as far as visually.

You said that you’re using water as a sort of negative in this series of paintings, whereas Whitman used water more positively. Is this sort of your rebuttal to his work?
I don’t know if he necessarily always saw it as a positive. There are some poems where the connotation there is not positive–or less than positive–as far as seafaring. But to me, it was interesting to flip that, because I like contrasts and contradictions, so using music as the positive, kind of fending itself off from the seas.

Do you see music and the sea as opposing forces, in a way?
At times, in the work it’s more expressive, where they’re juxtaposed against each other. In other times, it seems like it’s a never-ending struggle.

Looking at some of the paintings in the series, there seemed to be a nostalgic feel to the characters and settings. Was that something you were trying to put forth in the work?
Yeah, definitely. When you look at a lot of the clothing and stuff, it has that Victorian look to it. It’s a time period that influences a lot of the styling and things like that. At least with the clothing–not necessarily the style of the person, concerning hair and things like that, but definitely the clothing is an ode to that. Again, that goes back to reading those 19th Century novels. It’s just a visualizing thing when you’re reading literature from those time periods, that you’re engrossed in not just what the character is going through, but the culture that’s surrounding them. All those images have influenced my work.

Studying literature requires a lot of reading criticism and writing papers. Do you see your paintings as another way of interpreting what you read?
I think so. To me, when I was doing this and connecting Whitman to the imagery, I was like, “Should I be writing a 15-page thesis on this too?” Luckily, I avoided that [laughs]. It’s not like it’s less work or anything, but maybe I’m using Feminist Theory and Historical Theory to get that through and express that through my work. A lot of people who aren’t English majors probably wouldn’t understand that–they probably wouldn’t see that, but it definitely plays a part for sure.

One of the paintings in particular that really stood out to me was I Hear Not the Volumes of Sound Merely. Could you talk a little bit about your process behind that one?
That was the first one that I started working on. I started that one way back in 2009 when I was finishing my master’s degree. I just started with two layers of paint, and then I didn’t touch it for eight months until I finished my degree. I had an idea then of what I wanted to do with the series. It’s kind of weird when you have to put things on hold like that, but that’s how painting is.

When I think of the piano and the movement of sound inside the piano itself, the continuality of vibration throughout the piano–thinking of that, I can see a correlation with that quote. It spoke to me in a way that kind of surpassed music, actually, so it’s almost like the music isn’t enough to contain, just like the emotion that is drawn from that or influenced from that… Maybe that’s a weird quote [laughs].

For more information on Jeffery Felker, check out his website www.studiologica.com.