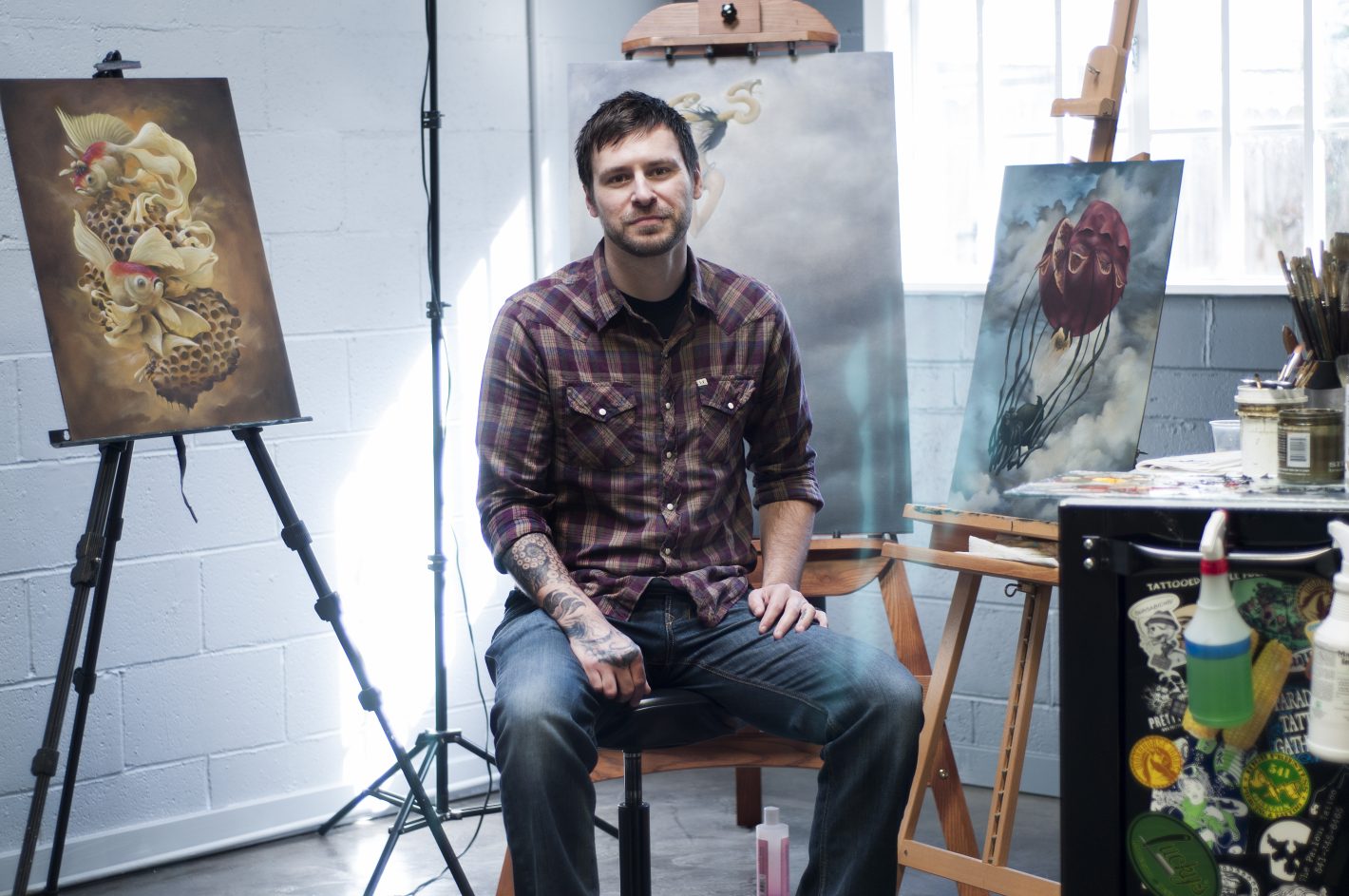 Speaking in front of people scares Corey Bernhardt. So does tattooing, painting and producing comic books. But he does all four.

“I like to challenge myself,” the Sacramento native says. “Tattooing scares the shit out of me, but that’s why I do it. That’s why I paint. I make this statement, ‘I’m gonna do this’ and it scares me to talk in front people but that’s why I love it.”

He admits to being scared of this interview too, but along with his ability to face his fears, Bernhardt knows he wants to connect with people and to learn from experiences and mistakes.

He also knows that all he’s ever wanted to be since he learned to read is a comic book illustrator.

“I had a friend who lived down the street when I was 5 or 6 years old and he had three or four comic books, and I was instantly blown away,” says Bernhardt, now 32. “He gave them to me probably because all I wanted to do was look at them when I went to his house, and I just read them front to back over and over again and started trying to emulate the illustrations.” 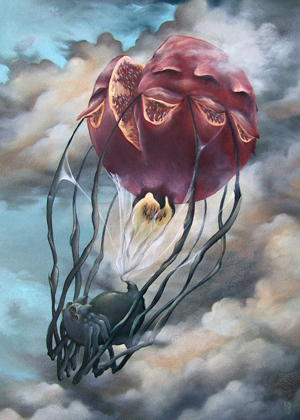 Bernhardt didn’t release his first creator-owned comic book Cardboard City, until 2010, some 15 years after his childhood comic experience. The short-lived action sci-fi publication with a robot as a main character received mixed reviews.

“I made a lot of mistakes,” he says. “I had never done a comic book before. I had trouble drawing certain things, or the pacing wasn’t right. I want to take what’s there and rework it and re-release it.”

Bernhardt loves storytelling and when he’s not painting, teaching or tattooing, he is home storyboarding and figuring out characters.

He started his professional art training in his early 20s, when a friend got him an interview for a graphic design position at a Tower Records production office.

“I started at Tower Records—it was kind of like the evil empire, a bizarre work environment,” he says looking back. “When I started I had no real graphic design experience, I knew a little Photoshop, I was 20 or 21, but I took some of my work and titled the folder ‘Please hire me,’ and the person interviewing said ‘It’s not the best work, but I like your attitude.’” 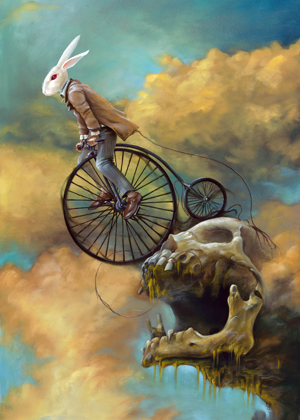 Bernhardt learned from other graphic artists working at the office and later produced freelance work for local bands and businesses—flyers, stickers, whatever he could try.

Hoping to further hone his skills, Bernhardt studied illustration in 2005 at the Academy of Art in San Francisco. In 2009 his freelancing and illustration work landed him an apprenticeship at Pretty in Ink Tattoo in Roseville.

“I never in a million years thought I would be a tattoo artist,” Bernhardt says. “When I was 19 or 20, I had some friends say I should tattoo but I was intimidated by tattoo artists. I didn’t have that persona, didn’t think I could hang out with them. But through graphic design, I got into it.”

Along the way, Bernhardt found much respect for tattoo art and painting.

“What I like about tattooing is it allows me to crisscross back and forth between the art forms, switch gears and do more sequential work or illustration, then go to painting,” he says. “I can’t say I love one over the other. And I think that’s how art is going today. You have to be able to cross genres, put down the pencil and pick up a camera, then put down the camera and pick up a paintbrush. But it is hard to find a distinct style.” 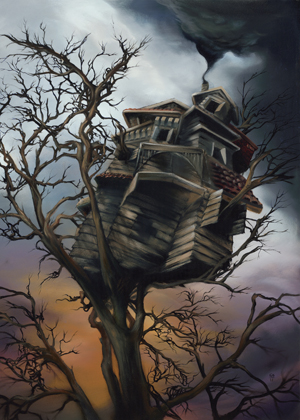 Bernhardt says he found his painting style, which reflects in his other work, when he first started putting oil on wood.

“I was never interested in painting—I just wanted to be a comic book illustrator—but when I started working at a tattoo shop, both tattoo artists I worked with were oil painting and they would bring out a canvas in between clients,” he says.

The practice intrigued him.

“With tattoos you would think it’s more about drawing, but it’s more like the fundamentals of painting, color theory, mixing colors,” he says. “Until I tried it I didn’t realize that. And when you work at a shop, you can put [your painting] behind you and a client will see it and might want it. It’s one more thing in your arsenal when you’re a freelance artist or independent contractor.”

So Bernhardt took a magnifying glass to his favorite artists’ prints and chose oil on wood to begin painting. A Circa Survive album cover inspired him, and he found out the artist had been Esao Andrews. His style, along with that of James Gleeson, left an impression.

“When I saw what those guys are doing I was like, yeah, that’s what I want to do,” he says enthusiastically. “It’s beautiful, grotesque, what I admire and I’m trying to emulate that kind of universe that they paint in. I think what made me so attached to that style of painting is when you see the painting, you want to be there, you want to see what it’s like to live there for a day.”

Bernhardt is more attracted to painting the bizarre in nature, using animals, insects and fruit. 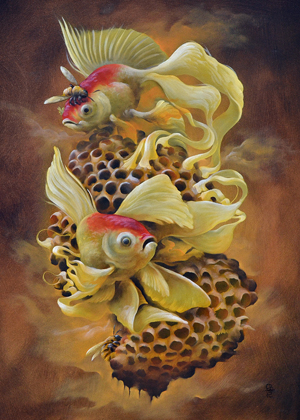 “I like to do bizarre things like put a fish in the sky, a bird under water,” he says. “It’s more a conceptual thing than a message. I’m not trying to convey a message, I’m just trying to get a feeling out of it.”

Bernhardt has only been practicing fine art for a couple years, but he has befriended a slew of Sacramento artists along the way. After connecting with local tattoo artist Jessica Ann White, and sharing with her a vision for a fine art gallery that also includes a tattoo shop, the two decided to open Reclamare Gallery and Custom Tattoo at 2737 Riverside Boulevard in Land Park.

“I wanted to get people to keep coming to the shop and also help other local artists by being a hub,” Bernhardt says. “You see that nowadays, there will be a gallery but there will be a bar or something in it, so the gallery doesn’t draw a lot people but you can get them in for a drink. I wanted people to know this was for fine art. It’s a gallery for artists who happen to do tattoos.” 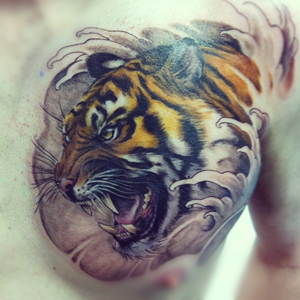 He also wanted a place to host local workshops, classes and artists who could teach painting, as a way to give back to the community that supported him. Currently, Bernhardt teaches figure drawing at University Art on Marconi Avenue.

“I just want for people to be comfortable and talk about art and not be intimidated by that whole culture,” he says of the new gallery.

Bernhardt is happy with the location of the gallery and shop because he doesn’t want to take away from the tattoo studios that have been established downtown, and because the gallery is in line with a few others in the immediate area.

“We’re also across the street from the cemetery, which is kind of creepy but it’s beautiful,” he says, noting he thought the shop might be haunted but took care of any possible spirits before opening.

Just another small scare along his path. No big deal. 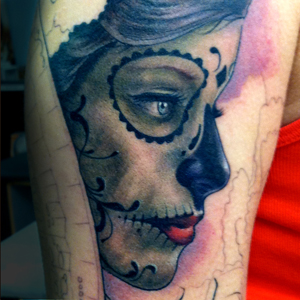