Even Photography Gets the Blues

JosÃ© Luis Villegas remembers the first moment he ever captured in a photograph. It was a self-portrait of him lying on his front yard at 16 years old. He set the self-timer on the Minolta 35mm camera that his father bought at a pawnshop, then posed with “a subtle smile” for his first photo op. That small interest he had in photography during high school later turned into a career that has lasted for 27 years, including his current job as a photojournalist for the Sacramento Bee. But one year before he started his job at the Bee, something caught his eye in the newsprint. He became moved by an article he read about an old blues musician that had passed away, and he got an idea.

“It kind of lit a light bulb in me, I started doing a little bit of research, back before we had access to computers, so a lot of it was going to the library,” Villegas said while sitting in the Viewpoint Photographic Art Center in downtown Sacramento. The little “light bulb” in his head would soon lead him to photographing some of the most influential blues musicians in the world. During his off time from his day job at the newspaper, he would be in contact with representatives of musicians that were coming through California and tell them about his vision.

“Little by little the doors began to open,” Villegas said. “And outside of some of the concert pictures, my real goal was to get access to photograph some of the activity that took place backstage and just try to get a little slice of what life was like for an older musician.” 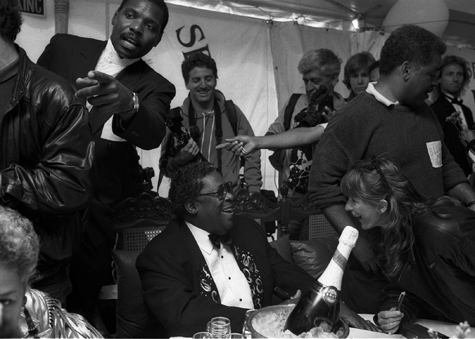 Throughout the years, starting in 1991, Jose has captured various moments in the world of blues music that isn’t just another concert image–it’s “appreciation” of blues music. For every photo displayed throughout the gallery, there is a moment frozen in time with an experience, an encounter or a performance with legendary musicians. “Some of them were very comfortable with where they were in their lives and were more interested in just playing the music,” he said. “And were more taken by the fact that people were still interested in their music, this many years down the line.”

Each memory and story that Villegas has about his blues experience can be clearly seen in each of his photographs. He vividly remembers that blues legend John Lee Hooker liked to have attractive young women at his side. He remembers the type of “aura” that B.B. King had when he was in his hotel room while surrounded by reporters or at a party where King was the center of attention. He recalls talking to Sunnyland Slim, a man in his 80s who was still performing a 45-minute set and remembers the way he was “slouching a little bit in his seat” at a night club. 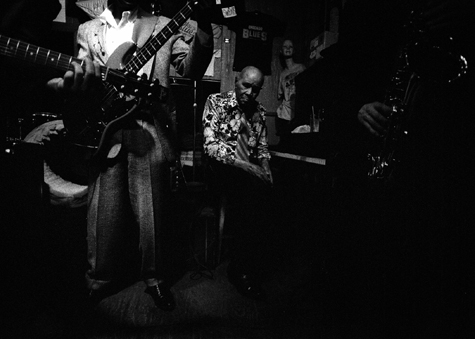 “The image was already there,” Villegas said. “And [the moment] happened several times during the course of the night. It was just a question of whether I recognized the moment and was able to compose it the way I wanted to.”

All of these memories are now black and white and color photographs for the Save the Music exhibit at the Viewpoint Photographic Art Center in Sacramento. The gallery of photos will give you a glimpse of the experiences of blues musicians with scenes from concerts, birthday parties and backstage chats. “I would hope that the photographs would speak for themselves,” Villegas added. “[People] get to see the artists more as people who enjoy what they’ve been doing for a long time.”

One photo in particular, of the more popular, Charles Brown–a blues singer in his 70s who was living in an elderly home then rediscovered by Bonnie Raitt–was taken in 1991 in Monterey, Calif. The photo has an up-close and personal feel; it almost feels as if you are sitting right next to Brown watching him play.

“In journalism or in street photography, I think the idea is to try and get yourself in a position where you can document a moment in time that hopefully will translate to somebody else as if they were there,” Villegas said, standing in front of his photos. “A moment that is spontaneous, that has captured a little bit of emotion, a feeling, and if I can get someone to feel something from that imagery, then I think I’ve accomplished what I’d set out to trying to do.”

The 51 year-old man who captured these “spontaneous” moments in his photographs is no stranger to the world of art galleries. Although this is the first time Villegas will be showing at the Viewpoint, he isn’t going to sweat during the exhibit opening because of previous experience including The Oakland Museum, Museum of Modern Art in Texas, the Baseball Hall of Fame in Cooperstown, N.Y., and the Crocker Art Museum in Sacramento. All of his photographs with the Sacramento Bee and from separate projects tell a story about the moments he has experienced during his life. “It’s been a really nice ride,” he said. “If anything I get real enjoyment of being able to share some of my work with other people who have interest in the subject matter.”