Artist Kathy Blackburn is Thankful for the Here and Now 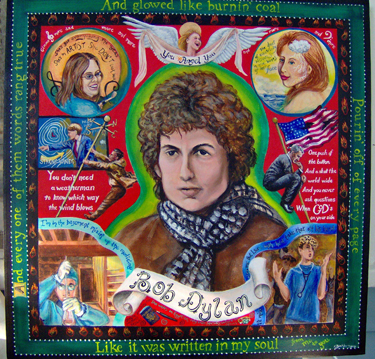 It’s fashionable to say, “The 30 is the new 20,” but in the case of Kathy Blackburn, the oft muttered phrase may hold true. An instructional coach working for the Elk Grove Unified District by day, Blackburn also has a passion for art.

“I always doodled a lot, but it wasn’t until 2000 that I made my first painting,” Blackburn said. “My husband is a musician, and he was off practicing a lot, and I thought, ‘I’m going to find something for me to do.’ So I went out and got a canvas and some paints, and it was like an epiphany moment. Here I am in my late 30s and I realize this is what I was supposed to be doing all along.”

Self-trained, Blackburn began showing her art in 2005. SaraJane & Co. will host her latest exhibition and mark the occasion with a three-day opening from Sept. 11-13. The four-person show will also feature Netherlands, Ed Phelps and one of Blackburn’s favorites, Mark Fox. Blackburn will be showing works from her current series of paintings titled Controlled Chaos. In a recent interview with Submerge, she shed some light on her latest series and explained why she feels she’s blossoming as an artist. 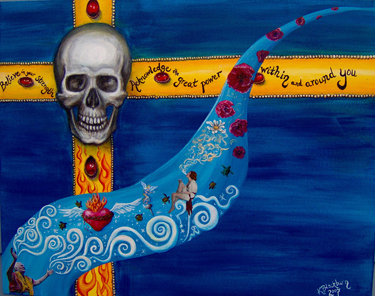 Does your professional life ever influence your creative life?
You know, that’s a good question. I guess the fact that I get to be surrounded by all kinds of interesting people from different cultures, and be with beautiful, happy, healthy children all the time, I think that definitely finds its way into my art.

Do you think that since you didn’t have any training, you were able to develop more freely?
You know what? I wish I did have more training. In fact I’d love to go back to school—back to the Academy of Art or something—and get someone to teach me all the techniques, because I do layer after layer to get what I want. There are quicker ways to do it if you know what you’re doing.

Also, at that time I was what they call a bilingual teacher, even though I wasn’t bilingual at all. I spent some time in Mexico taking language classes. All the art that I saw when I was in Mexico—all the bright colors and the folk art and the big murals—all that really influenced my art. My first paintings were of suns and moons, like you might see in Mexican folk art, and all that still influences my work today.

When you first sat down to paint, and you had the blank canvas in front of you, did you have an idea of what you wanted to do?
That first one I mapped out pretty carefully. I made a sun surrounded by four moons, and remember getting plates out and little dishes so I could make sure I had perfect circles. But you know what’s cool for me right now is that I’m at a phase where I don’t have to map out things carefully. Once I know what’s coming next, which takes me a while sometimes, I’m not having to make initial sketches. I just go right at it.

I wanted to talk about your current series, Controlled Chaos, is this the first time you’ve ever worked in a series?
Not really, but not on purpose, really. I did the suns and moons, and then I started doing a lot of portrait work and figurative work, which I still like. I still get commissions for that now and then, and I still put a lot of that into what I’m doing right now. But what happened was, I was doing all this figurative work, and a collector said, “I want you to make these paintings. I want them to be really large, I want them to be these colors, and I want them to be totally abstract.” And I had no idea how to go about doing that. I know the person liked Gustav Klimt, so I made made these big organic tubes and I filled them with all this patterning and gold leaf and stuff. That series is what led to the Controlled Chaos pieces, because now I have this structure where I can contain all my composition in the tubes, but all the figurative and portraiture stuff is coming back in. You can see that there is a lot more representational stuff in the paintings.

There’s a collage aspect to your work as well.
I experimented for a while with having the collage and having some realistic elements like that portrait of Einstein that I painted, because I wanted people to wonder, “What does she glue on and what does she paint?” But my most recent work has been a lot more painting and not just collage, so I don’t know if I’m moving on into a new phase or what.

What inspired you to experiment with collage in the first place?
I just think we’re so inundated with all these interesting images. Every time I open up a magazine or anything, I don’t look at the articles. The first thing I do is think, “What would be a good painting? What can I cut out and glue on something?” I have stacks and stacks of magazine, and I subscribe to weird things like Biblical Archaeology. Even now, when I kind of want a mental break, I do what I call collage therapy where I just randomly cut things out and find out what happens instead of making a real elaborate painting. One night, just get it done, and see what happens.

Why do you find yourself moving away from collage in your more recent paintings?
I think that’s what happening is that I’m feeling that my technical abilities are growing, so I feel more confident making a wide variety of images with the paint, and then of course I have more control. I can look at a picture I found in a magazine or on Google or whatever, but I can make it my own size or exaggerate features, or whatever. I think it’s just an extension of my powers growing.

You mentioned in your description of the series that the skulls were the focal point for Controlled Chaos. Were those images that you really wanted to use going into the painting of the series, or did you just notice skulls popping up in your work?
I made one big skull in the first painting I made in this series, and I just felt like the whole skull thing was a universal image. If I’d used your face or my face, you know there’s a man, there’s a woman. That person’s young, that person’s old, whatever. But that skull, that’s everybody’s future. That’s a much more universal symbol for all of us. That’s what I’m trying to explore: the mysteries that we all have to deal with all the time—the mysteries of the spiritual and the afterlife, yes, but also all of the myriad of things we have to deal with right now. That’s why skulls are the focal point, because it’s not about just me. It’s about all of us trying to figure out, “How do I live a decent life and be the person I want to be?”

Have you put any thought into a series you’d like to do next?
It’s interesting, because I’m still doing a lot of skull stuff, but I’ve noticed a lot of roses are coming in. I think I’m getting ready to bloom a little bit [laughs]. I’m not sure I can say. I can see some transitions happening. 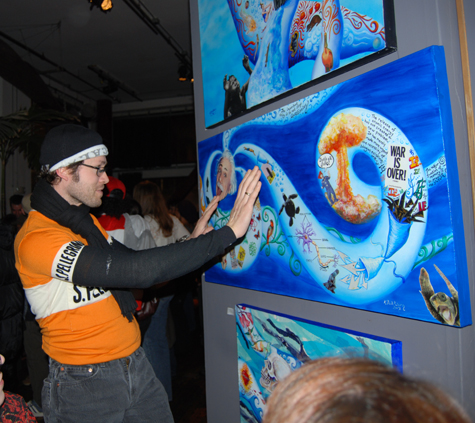