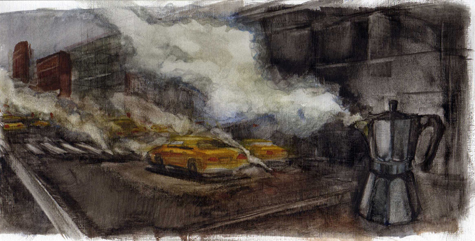 A slice of watermelon, a coffee pot, a steaming train; these things may mean nothing to you, but to the person on your left the same random objects could strike a nerve. In a good way.

When abstract/surreal artist Fernando Duarte had his first Sacramento art showing at The BrickHouse Art Gallery years ago, something extraordinary happened. One Oak Park woman was so touched by one of his paintings on display that she insisted on taking it home that evening. “She just had to take the painting that night,” remembers Duarte of the rare but welcomed occurrence.

“She experienced the same thing I experienced.” Duarte goes on to say, “She later sent me this letter that said, ‘Things happen for a reason.'”

As Duarte carefully pulls the hand-written letter out of a photo album and slowly handed it over he softly said, “That letter to me is more than anything people pay for art. That made me feel like sometimes art really touches people. When that kind of stuff happens, it’s amazing to me.”

Before heading to his current show entitled ABSURDA (an anagram of abstract, surreal and dada) at Inferno Gallery, Duarte graciously took some time out of his Second Saturday afternoon to speak with Submerge in his Midtown studio on topics ranging from “fast food art” to mocking reality.

Were you introduced to art at an early age?
I was born into a family of artists in South America. I am the youngest of seven; four of them are painters and artists. When I was 4 or 5 years old, I used to go to the art school with my brothers. I have no notion of anything else, I don’t know anything about accounting or medicine it was only art in my house. I had no choice; I had to become an artist. 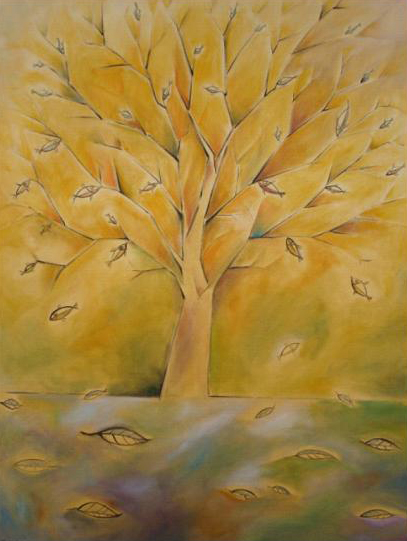 Now that you’re a full-time artist, do you think of it as a regular job the way most people think of their jobs?
Yeah, it’s just like when you’re a monk or something, you cannot be an 8-to-5 monk [laughs]. I try to paint, draw and do prints daily. I go home, I sketch. If I’m at the studio, I sketch. Even if I travel, I sketch.

How did you come to settle in Sacramento after spending so much time in the Bay Area?
When I had kids somebody told me, “Davis is great.” Basically that was the first move years ago, back in ’80-something. I got divorced and moved back to the Bay Area but my kids were here, so they were the main reason to be in this area. Eventually I started working more in Sacramento and knowing more people. And when the economy is so crazy in San Francisco that not even the mayor can pay his own rent, they push you out: From San Francisco to Emeryville and from Emeryville to here. You pay per square foot [for a studio], so I told the guy, “Give me a square foot, I’ll do a 1-foot by 1-foot painting [laughs].” They brought in all the dot-comers and heavy industries. This is what happened everywhere I had been.

Back in ’05 you were quoted saying, “I see a lot of potential in the Midtown area.” Now that it has been a few years, what are your thoughts?
It’s amazing, it’s getting better and better. I think Second Saturday is a little bit cuckoo. It’s becoming what I call “fast food art.” But it’s good; at least it brings people out in the streets. What the people need to learn now is to divide the art, food and music. Sometimes people go into the galleries just like it’s a meat market for the wine and food and that’s it. Art becomes secondary. It still has great potential, though. 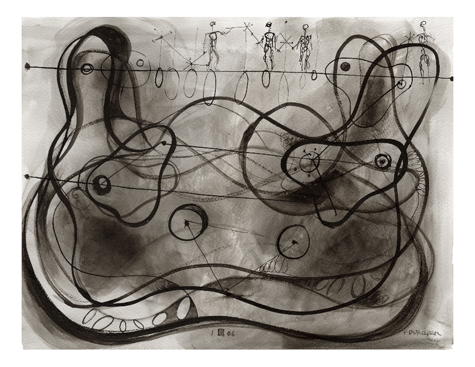 Is that why you had the ABSURDA reception before this Second Saturday, to avoid the crowds and the madness?
I did the opening last Friday because tonight I don’t think I will have time for buyers. People came from the Bay Area mostly, along with friends from Davis and friends from here. I like to be with them for one particular day without the whole crowd because I start to lose it. I don’t like openings anyways, but I do it because you have to do it. It becomes like a zoo, you’re like an animal in a cage and they analyze you and check your work. Now what they need to learn is to really understand art. People spend $200 eating sushi but won’t spend $300 on a print that will last forever. It’s an investment for yourself and for your future. Every time I sell something, I invest more than half of it back into art.

So you consider yourself an avid art collector then?
I have over 65 pieces. If I don’t do this stuff, who is going to do it? If you’re a musician, you buy music, you know? If I’m tight on money, I still buy art. It’s important.

I’m curious as to how you would explain your artwork to someone who had never seen it.
In words it’s hard to say. But I would say that it’s just mocking reality a little bit. I try to make a painting more real than reality sometimes, even if it doesn’t exist. I love the metaphysical or surreal point that you fake reality in a way. Reality can be anything but I like to play with the ambiguousness of reality and non-reality. You have to understand I was born in a town in a country where reality was so crazy. You can walk down the middle of the street and see a horse walking by.

When you’re painting are you thinking about how the piece is going to make people feel when they see it? If so, does that affect your work?
Yeah, sometimes when I’m painting I have this brainstorm in my head about everything, except money, honestly. I am even thinking about the person who is going to frame this work. I am thinking about how is it going to be looked at, how would it look upside down? What are the people going to think, what are they going to say? Painters forget about this, they become so involved with the painting, and that’s good but at the same time you have to think, “How are people going to react to this?” I’m not trying to please everyone and I’m not thinking about if it’s going to look good or bad in their living room, or if it’s going to look bad in their office. I don’t care about that. But I do care about feelings. 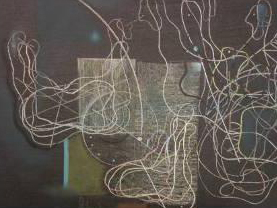