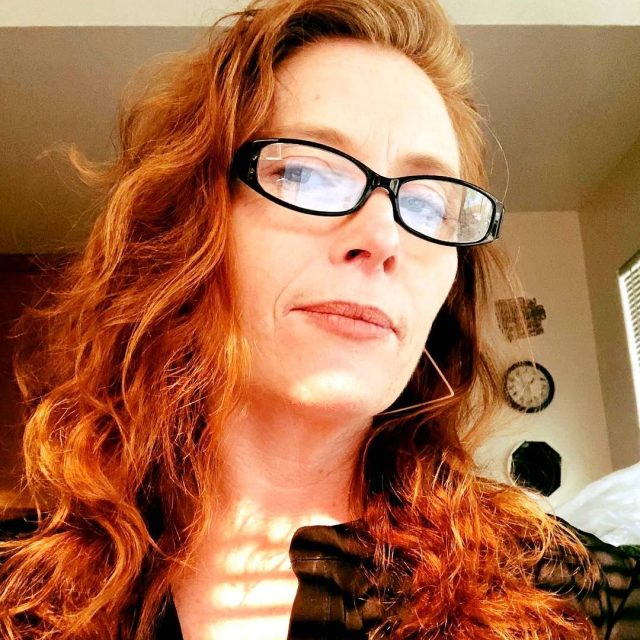 The women’s faces that emerge as representative shapes in Franceska Gámez’s otherwise abstract paintings are often composites. She likes the shape of one face, the lighting of another. Even though she borrows from random photos, or from strangers on the street, the portraits that arrive on the canvas sometimes end up resembling people she knows. While they are archetypal in some sense, like the maidenhead on the prow of the ship, they could also be real people on the street, swept up in some kind of magic experience.

While Gámez would probably shirk descriptors like “feminine,” there is an undeniable vulnerability in her work.

“I’m just working it out,” she laughs. “It” is the complexity of the male/female dynamic in the context of the art world, and of course, the world at large. She’s processing her traditional Filipino upbringing where men earned the dough and women kept the house, a stark contrast to her current culture in flux where the roles are breaking down and transforming.

Gámez is naturally an introvert, but her work definitely invites conversation. It would be fun, for example, to task a bunch of sci-fi writers with telling a story using her paintings as prompts. Her world has a structure, with bones underneath that are sometimes sharp and exposed. But the flesh floats and bleeds.

“I will sometimes go days without saying a word,” she says, almost startled by it herself. Many of her paintings have layers to them—defined crisp edges washed with translucent drips. She’s also fond of irregular canvases and resin-coated surfaces that make the colors pop.

Her sculptures are fabricated from found objects and scrap wood leftover from framing. She has a magpie fascination with miniature things. One sculpture, comically entitled PDA (Public Display of Affection), is constructed of wood in an architectural scaffold with a human heart wrapped around the front, clinging on for all it’s worth. Not a real one, of course, but it’s larger than life-sized and gives the impression of a naked, living thing, just cold and preserved.

The other universal struggle that often plays out on Gámez’s canvases is the tug-of-war between art and commerce, but that wouldn’t be obvious to anyone but her. In a city like Sacramento where artists have to fight for space and struggle to support themselves, Gámez is keenly aware of the inclination to do what sells. She wants beauty—needs it like food—but resists the idea of making her art palatable to define her “brand.”

She also observes conversely that when she’s done corporate commissions, the people who hire her are so hungry for inspiration, they seem like they are starving. It got her thinking: What does it mean to construct an inner life? How do we value human connections over consumption and ownership?

These are some of the questions she is asking herself as she approaches her upcoming solo exhibit, Mind Over Matter, at Sacramento State.

“We’re all going through the same thing, and it’s so important we be candid with each other,” she says.

She’s not solving any particular problem, or making any concrete political statement; Gámez is seeking to evoke a relatable feeling, to comment on the hunger itself. Her paintings, murals, sculptures and wearable art tell stories without being literal, but she notes she’s also addressing things specific to her own life.

Her early biography is the classic American success story: An immigrant family arriving in a staggered fashion to the unfamiliar city of Hayward, California. Her mother worked three jobs, busting hump to ensure a better quality of life for Gámez and her eight siblings, of which she is the youngest.

In the autobiography book her elementary teachers had her write, Gámez was supposed to say what she wanted to be when she grew up. She wrote “art” in pencil, then erased it, and wrote “math.” Growing up in the Bay Area, she never stopped creating, and from age 5 to the time she left for college, she witnessed the evolution of graffiti as it burst on the city streets only to get white washed away. The do-it-anyway moxie of those artists thrilled her, and when she became aware of Faith 47’s work out of South Africa, she was blown away: “A kickass chick did that.”

But art was not even a career consideration for Gámez when she got to Sacramento State. She gave the business degree the old college try. It was a joy-free academic year except for the fact that she got into an upper division art class. Her peers and teachers quickly made it clear to her that she had no business pursuing business. She changed her major first, then told her mom.

But of course, art-making as a career is also a business, and when Gámez graduated, she had the standard freakout.

“What am I doing, is this even possible? I had five backup plans,” she recalls.

But with the help of her partner and collaborator, Shaun Burner, and other working artists in her community, she learned how to budget, how to price and how to earn mural work—how the sausage is made. Her entrepreneurial leap was a body of paintings that continued to sell. And the rest is history.

Support from other artists continues to figure in deeply when she describes becoming a full-time professional. The groundswell of recognition Gámez has experienced lately has come in large part from her collaborations with other women.

“The unspoken camaraderie,” she nods, “and the way we encourage each other, it’s so important.”

Even working with women business owners feels like a shared vision, so unlike the employer and contractor transaction that is a default feature of the corporate world.

Co-creation has produced some unexpected delights for Gámez, who worked with artist Erin Yoshi on a San Francisco mural last year that won the Beautification Award for 2018.

“Doing the mural was just amazing,” Gámez says. “Winning the award was a total surprise.”

She was also invited to collaborate on a project called Behind the Barre put on by Capital Dance Project where dancers team up with visual artists and musicians to create new performances. The theme was “finding your inner child” and Gámez was paired with up with choreographer Julia Feldman. The dancers wore business casual with Gámez-designed sculptural headpieces that looked like pastel anemones.

The upcoming Mind Over Matter show uses the tagline “Our Mantras of Resilience Materialized,” which puts it in context. It’s a patient inquiry into the perception of female strength and weakness, a beautiful but melancholy exploration of what is pretty vs. what is true.

“I always straddle between darkness and elegance,” sums up Gámez.

Mind Over Matter includes 23 original works: paintings, mixed media sculpture and one large scale mural. The show is up now at Sacramento State’s University Union Gallery and will hang until Dec. 13. Artist reception takes place on Nov. 29. The artist will donate 15 percent of the proceeds from the exhibition to Camp Fire relief efforts. For more information, check her out on Instagram (@ewfrank) or at Franceskagamezart.bigcartel.com. See gallery hours at Theuniversityunion.com/gallery.