Gale Hart Summons the Animal Within 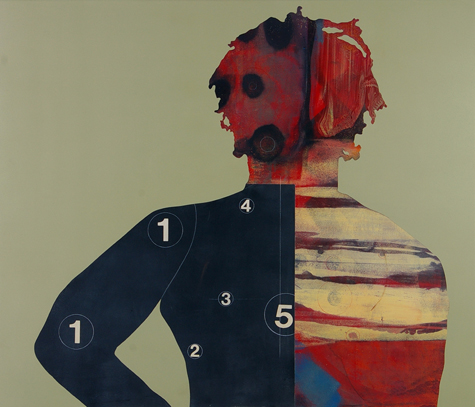 When Submerge caught up with local artist Gale Hart, she was building, of all things, a skateboard ramp in her studio.

Over the past few years, the 53-year-old artist reports that she has been “really into” skateboarding. While it may not directly affect her art, she does say that the frenetic activity is strangely relaxing.

“It’s one of those things that you have to be completely present while you’re doing it, so it takes me away from any stress,” she explains. “It’s like nothing else I’ve ever done. I’ve bicycled and you can daydream and stuff while you’re bicycling, and it’s not like you have to be consciously alert.”

It may not be what’s expected of a woman in her 50s, but doing what’s expected hasn’t had much sway over Hart through out her life. Just out of high school, she spent much of her time living on the road, in a van, traveling to parks and malls where she would ply her woodcarvings. She recalls, “Back then, malls were really high caliber, a lot different than they are now. It was like a way artists could promote themselves.” But further back than that, Hart remembers realizing her talent for drawing at age 12, though the work she was producing at the time was quite gruesome.

“I started drawing seriously when I was around 12—I mean real morbid, dark stuff,” she says. “Other people started noticing that I had talent, but they had such an aversion to what I was drawing—knives through hearts, daggers through ears and just weird things that pre-teens kind of do.”

Though she says, “I actually don’t think I ever wanted to do anything when I grew up for a living,” Hart eventually settled into her role as an artist, a role that she says comes with great responsibility.

Over the years, she has worked in many mediums—such as photography, sculpture and painting—and has also helped promote the work of others through her gallery A Bitchin’ Space. She has also been curator for shows such as the Circus Art Show, the second installment of which featured live performers, over 100 artists and attracted over 3,000 visitors (including the mayor of Sacramento). She says that experience “kicked her ass,” and now, after a four-year break, Hart has returned to painting. Her latest work can currently be seen at the Solomon Dubnick Gallery as part of The Animal Within exhibit, which will host a Second Saturday reception on Feb. 14, and will be on display through Feb. 28. On very short notice, Hart was kind enough to answer a few of our hastily formulated questions.

You were talking about drawing really gruesome images as a pre-teen, and I noticed a link on your site to Artbrut.com, I think. I was wondering if you consider yourself an outsider artist, or if you align yourself with the art brut movement.
Well, with the lowbrow movement, I think things changed in my age. I was doing stuff that’s popular now back when I was a teenager. It didn’t have its day then. Defining myself, I think I’d say I was more self-taught. I’d say that the fact that I didn’t go to an art gallery until I was in my 30s, I guess you could kind of consider me in that genre (outsider art), but I’d go more with self-taught.

A lot of the images I saw of yours were frightening—even the funnier ones. One image from the Why Not Eat Your Pet series features some of the Seven Dwarves surrounding Porky Pig. Are you hoping to shock people who view your artwork?
Well, no, I’m hoping to educate them. I’m hoping that my ability as an artist is interesting enough that people take the time to stop and look at my work because of my skill, and then they’ll get the message.

That’s interesting. I guess people really take those characters to heart.
Yes, I don’t think my intention necessarily is to shock. I think art is a great tool for raising consciousness. I think artists have a responsibility—when they really discover that inside themselves and see what their work evokes in people. Not just, “Oh wow, you’re a great artist,” or, “Oh wow, your technique is good. How do you make those surfaces?” When people come up to me and go, “I really get what you mean,” and, “Oh, man, I didn’t know that happened,” then you just start to be responsible and realize, “I’m really affecting the people who see me.” As an artist, you’re public. I think that comes with a certain amount of responsibility. If you want to really contribute to helping the planet or humankind, I think then, when you know that you can do that, that people will make the right choices as artists, and I did. I just can’t sit around and paint pretty pictures or blow people away with my talent, or all the normal things that the ego drives within art. All of those things are going to remain in my art, but I feel more obligated to talk about how we treat other species. 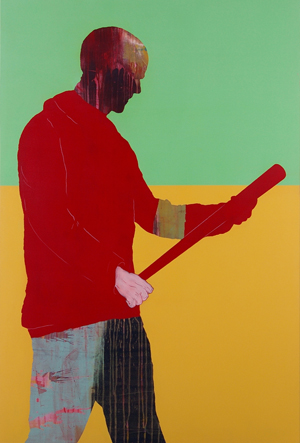 The relationship between man and the animal kingdom seems to be a common theme that runs through The Animal Within paintings and your other work. Is it just a hope to educate that draws you to those themes?
How we treat animals reflects who we are as a society, so it’s not just about the animals. It’s about who we are as humans. We’re taking creatures that are so sensitive and so innocent”¦innocent beyond belief. They’ve created no problem in the world other than doing their job, whatever their job might be as the animal they are, and we’re just destroying them and destroying everything else around them. It’s mostly just, “Knock it off.” Come on, people, just knock it off. You have so much power and control. I mean, if someone doesn’t eat an animal, they save a life. The average person eats 83 animals a year. I save 83 lives a year by not eating them. That’s pretty empowering. It’s about raising awareness. If it was about shocking people, I could do that. I could do that to the point where it makes them turn their heads, but I want to invite people into my work and at the same time, I want to put that information out there too.

I wanted to ask you about one specific painting in the exhibit, which also appears on our cover (see below), Forced to Wear Make-up. A lot of the painting is silhouetted, but there’s a small section, an animal’s face, that’s a lot more detailed. Would you mind talking about that piece a bit?
I like that juxtaposition of either pencil and paint, or mixing mediums so maybe they
have a collage element to them. Actually, I don’t really care for collage work that’s done with not an artist’s own work. I like it when artists use collage within the context of their own work.

For that piece, those silhouettes were two people I knew. What I was looking for was something that was super flat, and at the same time, there’s a lot of content and energy in the work too. I like that juxtaposition”¦ 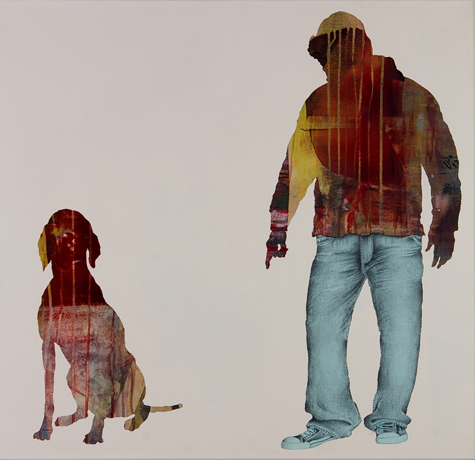 Property
Basically, it’s an abstract painting, and that abstract has got a lot of dimension to it. It’s got highs and lows. But then all of a sudden, when it becomes a figure and it becomes the silhouette, it loses all that. You can’t see the depth. I find that as an illusion, kind of, so I’m kind of interested in that. Now mind you, that all this work is experimental. All you’ve seen is all the work I’ve done, and I did that in a month. Basically, Jan. 1 I just started painting. So to talk about it is a little difficult, because it’s new to me, too.

In Forced to Wear Make-up, you have a silhouette of a very violent image, but the background is a very gentle pink. Is that something you planned on when the image was in your head, or is that something that came up while you were painting it?
In everything I do, I try to make the background this really inviting kind of pastel, sweet, soft color. And the movement in the abstract is all dark and dreary or bloody looking. It’s the dichotomy and hypocrisy of us as humans. That’s what some of that intention is with using soft pastel colors with stuff that’s really brutal. 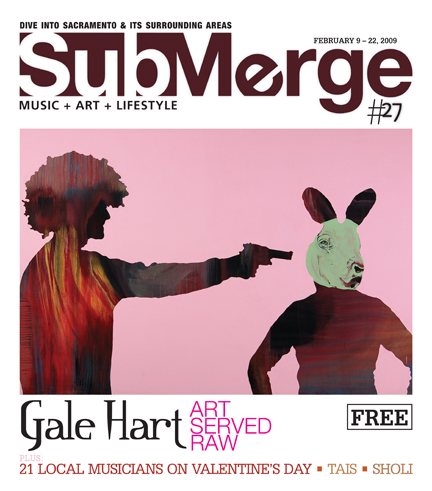