Often, good art does not end at the borders of the canvas. When a viewer leaves the painting, it continues on in his or her mind, lowering tendrils into the subconscious where the artist cannot follow. Jared Tharp is perfectly content with this. If anything, he wants people to see a mystery in his work. So, from one bubbling subconscious to another, his paintings come to life in the space between; and what a strange space it is.

Much of Tharp’s work can best be described as belonging to the realm of cartoons, and indeed, the amorphous, often disembodied cartoon figures ambling through his strikingly sharp new-wave backdrops have that classic “toon” quality: the zaniness, the madcap coloring and the plastic-y sheen of the characters’ skins. But the world depicted is still one dimension removed—as if a black hole opened up beneath your TV set, taking your Saturday morning viewing with it. If cartoons seem to us like hyper-surreal depictions of the world, then these paintings show cartoon characters forced to confront their own idea of the surreal. Here, on the uneasy border between the friendly lawlessness and threatening undercurrent of chaos in the animated world, Tharp produces irresistible portals into the bizarre goings on within.

We recently met up with Tharp at his Sacramento home/studio, where he lives with his wife and fellow artist Chelsea Tharp; we were lucky enough to peruse his awesome back-catalog while shooting the breeze about stylistic choices, subconscious influences and personal evolution. 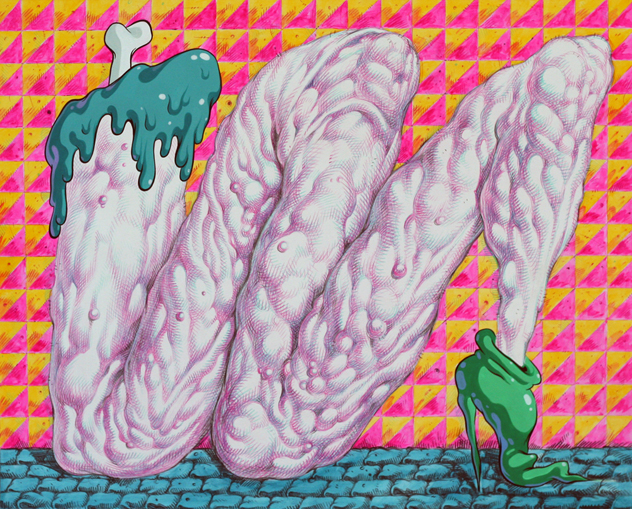 Do you have early memories of making art? Did you grow up around it?
I know that I’ve always done it—probably by following my dad’s example, or being encouraged, but my earliest memory…I remember watching TV, Tiny Toons was on TV, whatever cartoon—I would just sit there, and try to draw the characters that I saw—or, actually, I would try to draw characters like the ones that I saw. Sometimes I would draw Buster Bunny… I would sit and watch these cartoons, and I would try and invent my own characters. I kind of did a similar thing in high school, too. My whole drawing life, I wanted to take ideas and put a spin on them so that they’re mine.

What helps your creative process more than anything else?
Having organization helps. No distractions. Lots of time to myself, not doing art. Once the momentum is up, it’s up and you work until you lose speed or hit a wall. It really helps me to develop a language I’m excited about so that the painting is practically finished before I even start.

There’s an immediate visual attraction about a lot of these paintings. Is that something you aim for?
Yeah. You want to make work that’ll draw people in initially, but once they get there, you don’t want them to lose interest so quickly that they walk away from it…It just can’t help but kind of scream at you from a distance, “COME HERE!” [Laughs] Like this one in particular, [The Circuit] I had this one made, and it sat there for weeks before I decided to put the rest of the painting, this purple stuff, on here.

Many of the figures in the paintings—the legs, the faces—seem a bit familiar or nostalgic, but quite a few are disembodied or missing features. Is there a reason for that?
I want there to be a familiarity but also what I’ve discovered is that by removing certain aspects from artwork you can tap into something deeper with people. One of the ways you can do that is by not drawing or painting faces. Although the next thing I want to do after this is going to be all faces and cartoon characters, but with this stuff I was attracted to taking that out, I think that having no faces creates a mystery, and that holds people, and I think painters have anxiety about making a single image that will hold a person’s attention, because it’s so hard now. It’s too easy to just pull your phone out and “click.” You know, it’s a superior medium. It’s really hard, at least for me, to make something I feel strongly about. I don’t know if I’m achieving that with what I’m doing, but I hope so. 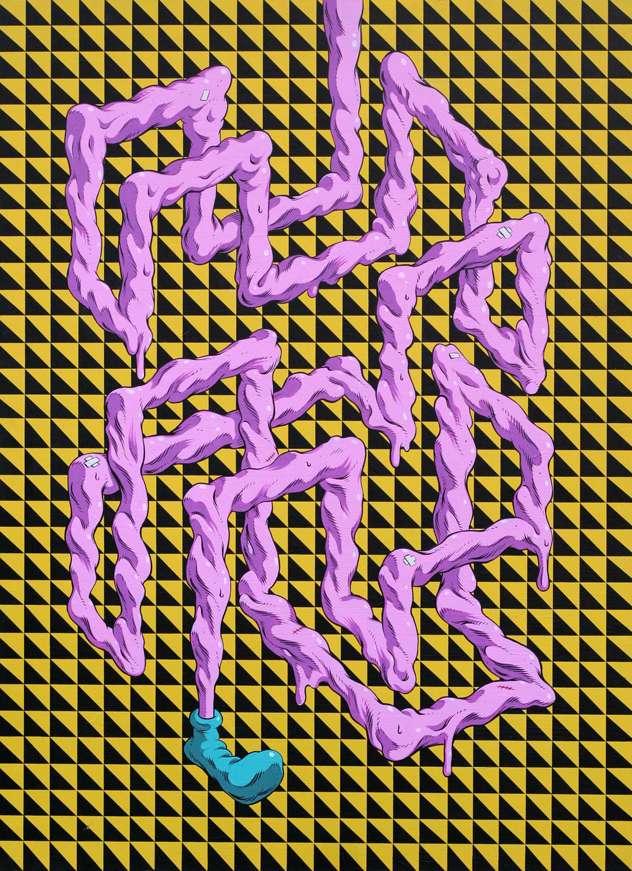 What in particular drew you into the triangular/ geometric patterns more?
I think I like doing the pattern because it does have a kind of therapy about it… Like, I have to peel back all these pieces of contact paper that I use, and I have to peel back each one, and this has about 1,000 triangles that I have to peel, and what is actually kind of cool about the process is that I can be making something without having to think about it. I can come out here, put some music on, and just zone out. It’s almost like a meditation. Just peeling triangles one by one. To me, that’s really cool, like you have noting but time to work on a piece of artwork, there’s no reason to rush it. And I think it’s also important to not be daunted by how big a task is. Like that’s 1,400 triangles that I had to paste down. I spent probably a week, maybe three to four hours a week.

Do you ever catalog your own work?
Back when I was kind of more into the gestural, painterly style—letting brushwork show, but somewhere along the line I decided I didn’t like that. But that’s not to say I won’t do something like that again. But I don’t necessarily feel comfortable with choosing one style and sticking to it. Now, I think my ideas are a bit more solidified. I don’t like to paint anything now unless I know exactly what I want. There’s a lot of planning and sketching before I make something. But the value in my old stuff was that I could just sit down in front of my easel and start putting shapes and it felt nice, there was a therapy in it. Now, it’s sad to say, when I make work, I’m very wary of fun. If I have too much fun, if I have like a beer or two, or five, as I’m painting, I may have fun doing it, but then I step back from it and it looks like crap! So now it’s just like a discipline. I need to know exactly what I’m going to do before I work.

I notice a lot of specific little elements in some of the paintings, like small pots/bottles, dog-bones, ladders, tiny band-aids on the characters… What draws these out of you?
This is just like going back into childhood. These pots are like pots that you would find in a dungeon in Zelda. Or pots that you would go into in Super Mario Brothers 2. I think that’s the whole mystery thing coming back, like, “there’s something in there. I could go in there. I could enter this piece and I could come out somewhere else.” And the bones, well…it’s all about mystery. Bones have all kinds of connotations, as do ladders. It’s all about building a mystery. 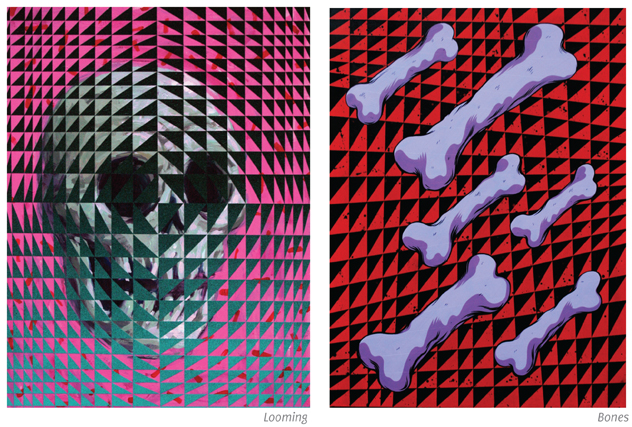 Jared Tharp’s latest exhibit (with Waylon Horner) Logical Deformations opens at the University Union at Sacramento State on Oct. 27, 2014. There will be an opening reception on Oct. 30 from 6 to 8 p.m. If you’d like to see more of Tharp’s work online, go to Jaredtharpart.com. Logical Deformations will run through Nov. 20, 2014.