John Stuart Berger’s Not Afraid To Show is Teeth 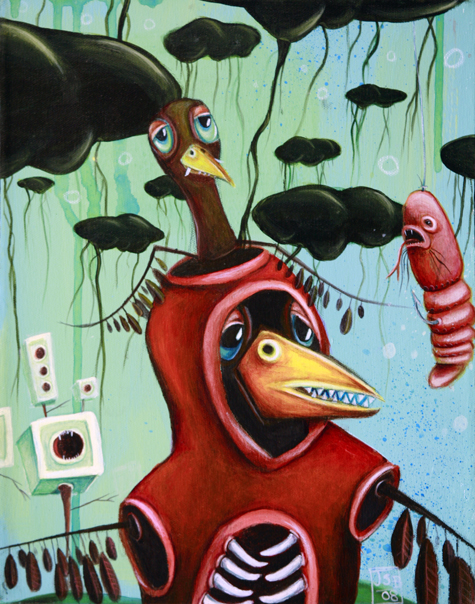 Sacramento is home to John Stuart Berger, a prolific artist who has been creating and showing his paintings for over 20 years. With two decades under his belt, you might imagine a man jaded and burnt-out. He is quite the contrary, instead painting constantly and showing regularly-all while raising his 4-year-old son and teaching art to disabled adults at the Short Center North.

“I’m constantly painting. It’s the one thing that everybody always asks me, ‘Do you have a show coming up?’ and a lot of the times I don’t,” he says.
Lucky for you, this time, he does. His show, titled The Ubiquitous Mandible Crushing Sideshow, opens April 11, 2009 at the Upper Playground in Sacramento and runs through May 31. Submerge met up with John at his studio inside the Verge Gallery on 19th and V in Midtown to discuss painting, growing up in Danville and male bonding.

You have a show this month at Upper Playground. Are you doing all brand-new paintings for the show?
For the most part they’re new for Sacramento; some of the pieces I’ve shown in Los Angeles and San Francisco. With the exception of maybe three pieces, they’re all new to Sacramento and then 70 or 80 percent of them I’ve never shown before. I’ve just stashed them away over the last couple months.

Over the past three years, according to your Web site, you’ve done over 130 paintings and I’m sure there’s many more. What kind of time schedule do you create for yourself so that you can be so prolific?
It’s hard [laughs]. I kind of joke and say that I don’t eat and sleep. The fact is, I have a 4-year-old son and he keeps me really busy. I have to make blocks of time. My wife has a really variable schedule too, but usually she has some nights off. So, there are one or two nights a week that I come here to the studio or there’s the male bonding thing over at Skinner’s house [laughs]. We call it that, but occasionally we do get some women that do that whole thing. 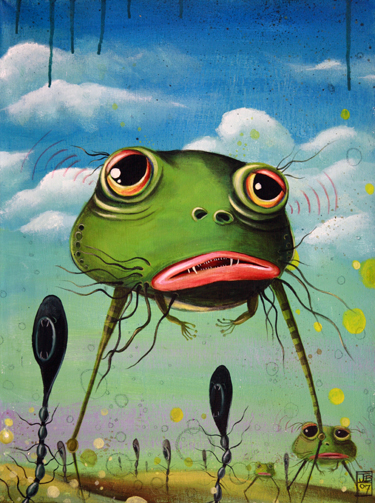 But then it’s not as fun because there’s not as many fart jokes, right?
Right, right. We totally want the women to come to the space, but it’s so dominated by testosterone”¦ I mean, I’d be afraid if I were a woman.

I know you and Skinner Davis are pretty good friends and have worked and painted closely together. Have you noticed his style or even his work ethic rub off on you over the years?
I don’t know if we really influenced or rubbed off on each other. I think we just fed off each other’s energy more than anything. I think technically we come from two different backgrounds. He’s got a big comic book influence, which you can totally see in the line work of his paintings. I’ve got that a little bit; I looked at a few comic books when I was a kid but I actually learned to draw from field guides and old 18th century etchings and shit like that. 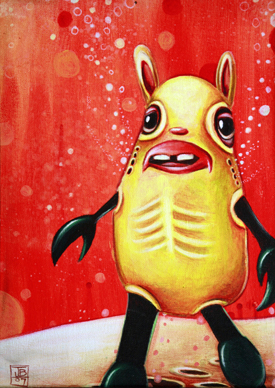 That’s where that animal and plant influence comes from then?
If you look at some of the stuff, it’s that three-quarter profile shot of the birds. It’s classic field guide—Audubon staging—and that’s where I learned to draw. We lived out in the country in Danville when it was very rural. The community that we lived in didn’t even have a sidewalk so it was all ditches and roads, and we had 60 or 70 acres behind us. I was very influenced by that surrounding. We had this big creek behind our house that I would always go to and admire all the crazy plants and animals. Then I got into field guides. I could draw from them because I could have them with me; draw before I went to bed and draw when I was outside. Then I would have fun mutating the animals and breaking them down and doing composite studies.

Looking at your work, it all seems like a photo album of candid snapshots of this alternate animal universe.
Yeah, it’s funny. A few years ago I was showing at more of a fine art venue, like Solomon Dubnick and Himovitz and now I’m showing at these urban”¦like”¦I don’t even know what you would call it. I’m sure there’s a label that’s more appropriate. It’s considered lowbrow now I guess. It’s defined as pop surrealism and it’s fragmented off all these different things.

I just call it Juxtapoz-y.
It’s just that these people have a very different background than me. These guys are all comic books and cartoons. A lot of the stuff that’s popular right now comes from that. I did a little bit of that. I did some skating as a kid and I read a few comic books, but my emphasis and where I drew a lot of my inspiration from is totally different. It’s kind of weird and awkward sometimes too. Everybody looks at you and tries to figure you out. Sometimes I almost feel like I don’t really fit into the fine art thing, and I don’t really fit into what’s going on now. I shift back and forth in the parameters of both. 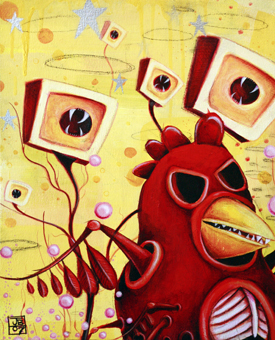 Do you think that’s a good thing?
I think it’s good. I mean, everybody’s art is derivative in a sense, but I think that it makes me less derivative”¦ I obviously do have influences and then people can draw correlations that make me derivative, anybody can do that. They can construct a hypothesis of who you are but I like the fact that I’m just doing whatever it is that I do, and that I do have a different background. I think a lot of people have a hard time identifying, because I don’t do a lot of people. For a while I tried to lecture myself. I’d ask myself, “Should I do people?” You go through these periods where you beat yourself up. You just get really introspective. Then you’re comfortable and say, this is just what I do for whatever reason.

You said you can be real introspective, which is self-inflicted criticism. Have there been any outside criticisms that have made you question how or what you paint?
If anybody says anything that can be construed as being negative, it would be that everything looks so angry. This older stuff [motions to a painting of fish with piranha-like teeth that hangs on the wall], this is 13 or 14 years old, it’s got these really dark and shadowy backgrounds. Everybody refers to those as everything looking dead; dead and angry, with teeth! I put teeth in everything and I don’t know why I do it. I think I’m fascinated with the whole predation thing; things consuming other things. Now it’s gone to parasites. That’s just my geek background again. 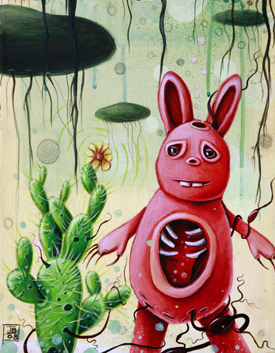 You’re painting the whole field guide, from the parasites, to the birds, to the reptiles.
And I’ve got a whole arsenal of old textbooks. Those are the greatest. If you go to thrift stores, for 50 cents you can pick up an old biology textbook. Just some of the plates you can draw from are great. I got this really great paleontology book a few years ago; it’s just got the most incredible etching line work drawings that are inspiring.

As far as acquiring shows and selling artwork, do you feel that Sacramento has been good to you?
I’m in a weird place right now. I’ve been showing in Sacramento for almost 20 years, which is crazy to think about. I kind of feel like artists are a lot like bands. When you are up-and-coming, everyone wants to see you. Then you get to that point where everybody has seen you”¦ You’ve saturated the market, basically. So the next obvious thing to do is go to the bigger markets. But the bigger markets don’t know who you are, and they either pick up their own people that they’re into or they’re big enough that they’re getting really big people. So, you totally get lost in that shuffle too. So, I’m kind of in that in between area where I’m a little fish in a big pond and I’ve kind of worn out my welcome. That’s the way that I feel, like I’m in this whole in between. Nobody really knows who I am, or everybody’s seen me”¦ But as far as Sacramento being good to me, I like Sacramento. I like the size of it and the fact that everything’s tangible. Proximity too, I can easily go to San Francisco and do a show and it’s no big deal. Then basically everybody that I’ve shown with, artists and galleries combined, I’ve really enjoyed and had a good time. I’ve got a lot of positive feedback here. I’ve had very few bad experiences. 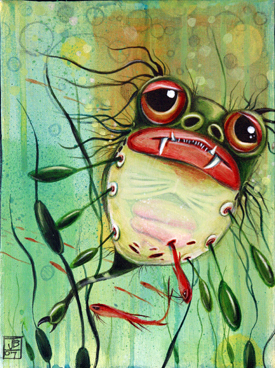 You said you have a 4-year-old son. How has that influenced the way you make art?
He’s probably become aware—what I would consider aware—of my work in the past six to eight months. We’ll go somewhere, around town, and he’ll see stuff 500 hundred feet away and say, “Oh my god, that’s one of daddy’s paintings!” As far as how I approach my artwork, the only thing that’s really changed is how I divide my time up. I really want to be a good dad and spend time with him, but I obviously have this thing where I want to get artwork done. I really have to make my time count, because I used to be a little more haphazard with my time. That’s the influence. I have to structure my life differently so I can still get work done because that’s important to me.

We’ve heard from just about everybody about how bad the economy is and how we are in a recession, etc. Have you been affected or are there always economic ups and downs as an artist?
Ironically enough I’ve already been through one. It wasn’t as bad of a recession as this. Actually it was…when George Bush Sr. was in office. So, I’ve already seen that fluctuation, but this time it’s definitely a lot worse. I just don’t sell as many paintings, but I’ve always been somebody that’s had a day job. I’ve got a couple friends that rely a little bit more heavily” on their art or a facet of their art to make their primary income, and they’re hurting. 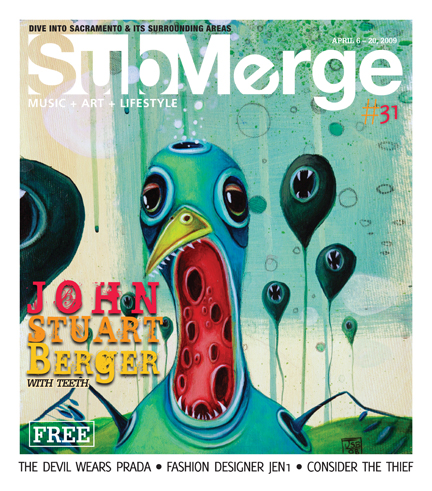