Mary Younakof grew up in Los Angeles, but it took her latest artistic endeavor to see her city beyond what she previously viewed as just another congested metropolis.

343 Dresses: The Chromatic Convergence Project spotlights the random splashes of color camouflaged in L.A.’s concrete jungle. To do this, Younakof spent a year sewing 343 dresses—49 different tones of the seven colors of ROYGBIV (red, orange, yellow, green, blue, ivory and violet)—and staking out color-corresponding areas of L.A. to pose in for photos and videos.

The point, at first, was to depict the rainbow and L.A. in a new way; but over the last five years, as Younakof’s ideas continue to form around the dresses, the project has become more of a study of human interaction, the effect of color on the mind and much more.

She started by researching the historical uses of rainbows in art and this eventually led to research on how people perceive colors.

“It’s almost like one step led to the next step and I spent almost one year creating the concept,” she says. “It was so big I needed to create a really specific formula for working with it.”

Younakof thus decided to use the number seven as the structure for the project because it was the number of colors in ROYGBIV, and because it seemed to naturally occur around her. The 343 dresses she created each have seven pieces to help keep with the theme.

“I was really interested in creating a dress that would have shape, form and mass,” she says. “It would be me against the landscape for the most part so I wanted to create form that is a little more sculptural. I thought, how can I use as much fabric as I can that takes up cubic space?”

To avoid walking around in a box, Younakof created a very simple but elegant pattern in seven pieces.

“It’s very distinctive and sculptural and people identified with it as the project unfolded because it was cohesive with the character I created,” she explains. “There were a lot of factors involved in designing that dress. A lot was driven by cost. I created something with no zippers or buttons. I wanted to do it simply.”

The dress became initially like a one-person performance piece. Younakof grew to love wearing each one, because she became a character within her own project and it felt like dressing up every day—but in the same thing. Only the textile changed the concept of the dress. Sometimes satin, other times taffeta or simple cotton.

“The textiles changed the mood of the dress,” Younakof says. “It felt different wearing a pink satin dress one day and a pink cotton dress the next.”

Younakof found the effects of the colors on other people most interesting. Complete strangers would often approach and tell her how they felt about the color.

“To have such a personal experience with it was really a much more powerful thing,” she says. “People migrate toward different colors and talk about them and have color associations and have nostalgia. I was not telling the stories, I was being told the stories.”

One of her favorite moments was a brief encounter with someone who simply wanted to identify with her, even without a story. “I remember walking into the market to buy groceries and the doors open, and I walk to the produce and this guy is pointing and waving his hand, and I’m like, who is he talking to? And I realize he is pointing at me. And then I point to me and he points to him and he is wearing an orange sweatshirt and I’m wearing an orange dress and we are 20 feet away from each other and just smile in understanding. Those interactions are the most fun.”

Before she started the project, red was Younakof’s favorite color. But after she began 343 Dresses, orange became her favorite because it attracted the most people to her.

“People tell me ‘Oh gosh, it reminds me of the orange teddy bear I had’ or their bedroom that was painted orange—there were very specific associations with the color orange,” she says. “But I think of all the colors I wore my favorites to wear were the hot pinks, because you don’t wear hot pink often. But the color orange compelled people to talk to me. The kind of stories that were told were heartfelt stories. I enjoyed wearing colors of pink that I wouldn’t get to wear but I really enjoyed orange because of what it brought to me.”

Conversely, she adds, she was horrified to wear some colors, like Shrek green.

“I was horrified but then it wasn’t that bad,” she laughs. “People looked at me and then went on their way.”

Along with her change in feelings for colors, Younakof changed her perspective on her home during the first year of wearing her dresses.

“It’s made me really focus on how color is integrated into the landscape,” she says. “Typically my experience of the city is you’re always dealing with traffic, trying to get somewhere, so this is looking at the city with a different pair of glasses. What was exciting for me was when I started to identify these colors in buildings while driving, or wherever I was, I noticed a lot of vibrant colors that people used on their buildings to create their place in the city. When you start to look you notice that other cities are not quite as colorful. Los Angeles is such a large metropolis associated with traffic and congestion but my project caused me to slow down and see my city in a microscopic way.”

Younakof’s photos and videos taken throughout the last few years do cause a double-take—she did not paint those sides of buildings with bright reds and blues, or purposely place a gigantic yellow smiley face on a truck in the middle of a parking lot. She made her environment pop—where before, it just blended into the background noise.

After her year of dress wearing ended, Younakof installed the pieces, outfits and all, at the Pacific Design Center in West Hollywood. Shortly after, galleries asked her to “perform” 343 Dresses and she incorporated the public into her project to showcase yet another aspect of how colorful life can be.

“Part of the initial concept was doing performances with a large group,” she says. “The first performance was an opera. I created this space in the Pacific Design Center where the [dress wearers] kind of spin around in space and create these color combinations based on numbers.”

Younakof worked with friends to create a composition based on the number seven. A German composer created the final piece and opera tenor Carlos de Antonis sang as members of the public performed around him. Since then, she has also performed in San Diego. 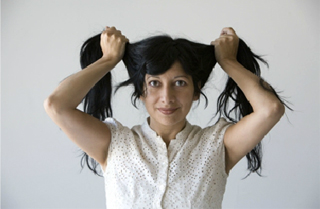 “I was invited to do some performances in San Diego so I invited the public to wear the dresses and they chose what colors they wanted to wear,” she says. “It’s interesting to see them create this community around the dresses. There were all ages and all genders. The last performance I had, had more men wearing the dress than ever. It was very exciting.”

[At the time of the interview] the Sacramento showing has not yet been fully planned, but Younakof says she is excited to take 343 Dresses somewhere different and see what happens in a different place.

“I think when people see it is an L.A.-based project and they see it through my eyes, they have said it could be so many places in the world,” she says. “And maybe that’s what happens in its own way, it brings together so many people who could be from anywhere. Just like L.A. is so diverse, it invites a very diverse crowd to come and be part of it. People are very attracted to color and they love seeing color. It was great to see people not knowing which dress to wear.”

343 Dresses started out about the spectrum of color in Younakof’s urban landscape, but as she continues to travel further out, she thinks more ideas will come to light.

To see what Younakof has in store for Sacramento, check out 343 Dresses: The Chromatic Convergence Project at the Verge Center for the Arts from Sept. 11 to Oct. 26, 2014. Opening reception is Sept. 11 from 6 to 9 p.m. For more info on the project and the artist, visit 343dresses.com.