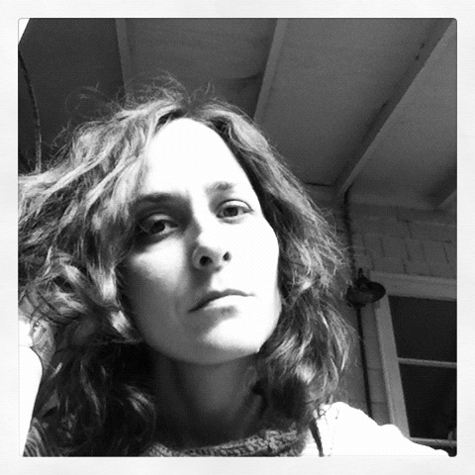 Sculptor, installation artist and Sacramento City College professor Mitra Fabian turned an obsession with tape into an enlightened path toward a full-time life in the arts. The answer was on her desk, stuck to her fingers and keeping her chip bags sealed.

Mitra Fabian uses tape a lot and not just in her art. She admitted in one interview that she tapes chip bags shut when she’s finished. In her twenties she subtly incorporated tape into her art, which mostly utilized wood and metal, as an adhesive for hand-made paper, flower petals, leaves and bee’s wax. By graduate school she created an entire thesis on tape. “And not just any tape,” she joked. “But satin finish Scotch tape. No, I don’t get paid to say that.”

If her month-long installation at Bows and Arrows, near 19th and S streets, entitled Signs of Growth, is a continuation of her most recent works, be mindful of the crystal and slime-like growths around the collective. Fabian’s work with tape and office supplies reduces the inanimate to an unrecognizable state and arranges it in a manner that returns it to an organic growth or infestation. She has an uncanny ability to make hardened glue globules look like hatched insect eggs, wound tape becomes icy crystals, and neatly folded blinds look like a giant fungus. She’s listed as a sculptor but could double as a scientist or worse yet, a mad scientist.

“I definitely have apocalyptic, science fiction notions running through my brain,” she said. “As the line between natural and artificial becomes ever more difficult to discern, I dream of new organisms generating from these bizarre marriages.” 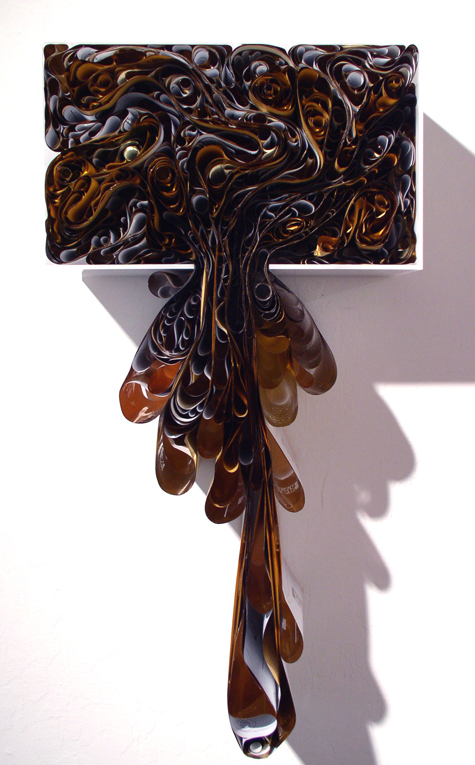 How did you arrive at this format?
At the time I was looking for a material that was translucent with which I could build easily. I tried resin, various kinds of fabric and paper. None of these worked; resin was too time-consuming and toxic, fabric would not hold shape. I wanted something more immediate. And I realized that the answer was right in front of me–something I used and have a strange obsession with–tape! And that is what started the office product trend.

Were you by chance working in an office around these supplies?
Yes, sort of. I worked as a production manager for a furniture company in Los Angeles. Half my day was spent overseeing the people who refinished and upholstered the furniture and the other half was spent at the showroom–behind a desk, processing orders, filing. These systems of order and the products that facilitate the process became a curiosity to me.

As you began tinkering with items, it appears as though your discovery led to a manipulation that renewed the item to its organic state or linked it to something more organic, like crystals or the drip effects in caves. Can you elaborate on these phenomena within your work?
I equate my process to that of child’s play. Not in the sense that it is easy, but rather that I spend time with the material, playing with it. Pulling it, pushing it, taking it apart. I want to discover its limits of manipulation while hoping that it does something interesting. I want it to undergo a transformation; in my own naÃ¯ve way I am playing scientist. I like the idea of taking something manufactured and forcing it through a metamorphosis to become something that looks natural. I enjoy those kinds of ironies because I am fascinated with the persistence of humans tampering with nature.

I don’t think many artists find the idea of viewing themselves as scientists all that appealing, since artists are usually pursuing the creative over the concrete. Did you ever want to be a scientist?
When I was young, I did not want to be a scientist. I was not a strong science student, so I never thought I had enough smarts to pursue something like that. But when I think about how I played as a child, I was playing in the mud, creating worlds with natural materials and watching insects with rapt fascination. Now in my adult life I recognize my interest in science, but I still don’t think I have the brains to contend with things like chemistry. I am much happier watching anything David Attenborough hosts! I did study anthropology in college, and my husband is a professor of anthropology and archaeology, so I often feel my social science background definitely plays a role.

I get this feeling like your work is making a statement on humans tampering with nature. What’s your opinion on our role and interference?
I think it’s inevitable and maybe necessary that we tamper. It’s human nature. And I think that very often people are trying to improve upon something. For instance, I recently heard about a genetically modified mosquito that is bred to produce offspring that will die. Considering how I just got eaten alive in rural France for the month of July, I thought, Hooray! That sounds fantastic! But the skeptic in me then thinks, how do we know that this won’t go terribly wrong? That the mosquitoes won’t somehow build up a resistance to it?

Sometimes we tamper to save things, like animals on the endangered species list. But if you think about it, that is kind of a bizarre endeavor. I am usually not of this opinion, but sometimes I wonder if something is meant to go extinct. The repercussions of keeping it around artificially may somehow be worse. 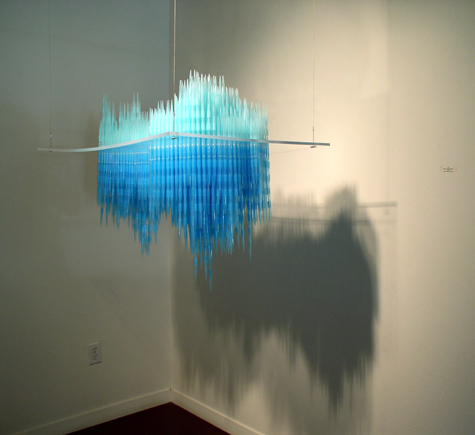 Some of your work has a grotesque or abomination feeling to it, as though the natural is rebelling or in conflict to its surroundings. Is this from our tampering or do you view it as an evolutionary necessity?
Both. I think humans constantly underestimate the intelligence and power of nature. Going back to the mosquito example–how do we know that it won’t over time adapt to circumvent the modification and become more fertile?

Besides the sculptures themselves, the lighting and photography of the piece seems to play a vital role. Would you agree?
Absolutely. I am naturally drawn to materials that emit or reflect light in enticing ways. So ensuring that the light shows off these assets effectively is very important. That makes the photography challenging sometimes. I either hire a professional or spend lots of time correcting in Photoshop.

Is the use of shadow intentional?
The shadow is a direct counterpart to the light, so yes, it does become important. As far as what it conveys… I am not sure. In many cases a sense of drama.

Have you picked up little tricks to gather up a large amount of materials at an economical price? Even free?
I often collaborate with local manufacturers in using their “garbage.” But I also have a few sources that sell these cast-off materials for reasonable prices. And if it’s a household product, I will put the word out, and I will get free donations. At one point, I had all my neighbors setting aside their black plastic. 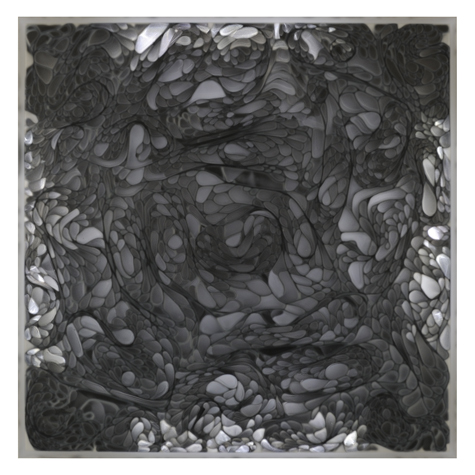 Signs of Growth will be on display at Bows and Arrows in Sacramento from Sept. 7 through Oct. 3, 2012. An opening reception will take place from 6 to 9 p.m. on Sept. 7. Check http://www.bowscollective.com/ and to learn more about Mitra Fabian, check out Mitrafabian.com.