Painting Her Heart Out

MJ Lindo speaks with vulnerability and self-awareness that is sometimes rare for a 27-year-old.

The Santa Rosa-based artist has always painted what she felt, using her childhood, dreams and nightmares as muses, but she knows this opens up her insides to criticism, and she doesn’t pretend that it’s easy.

Lindo’s first solo gallery show opened Aug. 22 at Lux Quaubas Gallery in Old Sacramento. Speaking with her just a week prior, she said she was excited but extremely nervous.

“I don’t know anyone in Sacramento, so it’s scary, especially because I worked so hard. I’m still trying to finish pieces I will have to drop off the day of,” she says as she walks her Neopolitan Mastiff puppy near her new house in Roseland, an unincorporated area within Santa Rosa with diverse cultural influences on art, food and local events.

Lindo has been drawing for as long as she can remember, but only started painting at age 15. She began by working for a Santa Rosa mural restoration project with the city, and worked in groups on large murals until she was 21. 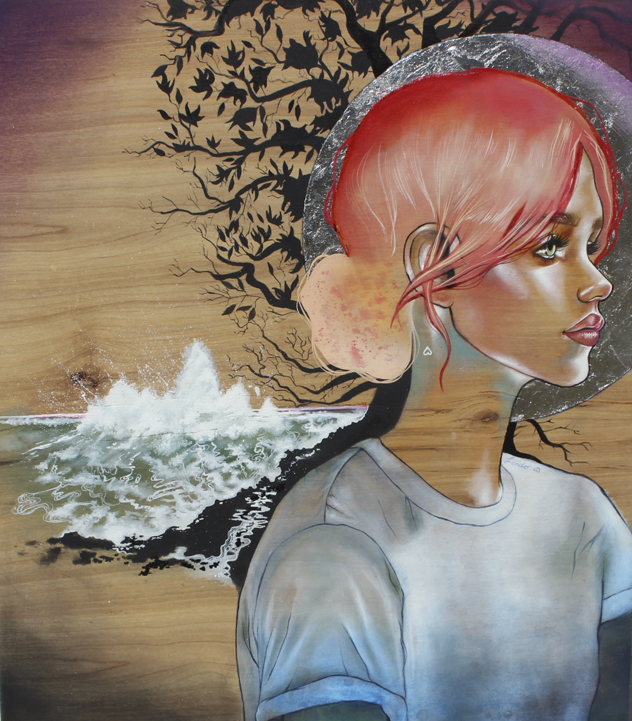 The experience taught her more than just how to accomplish large-scale murals, but also how to offer a unique perspective to the public and how to preserve cultural art.

From there she worked in acrylics, but it wasn’t until she started oil painting at 25 that she found her current style.

“It was a different media, and I could do a lot more of my ideas with it,” she says. “If you look at my older work, I used to be obsessed with zombie girls that were very dark and creepy, but I switched to oils and my work got happier. Part of it was my boyfriend’s influence—he was just somebody I can bump ideas off of. He pushed me to a different level.”

Lindo’s work from about 2008 to 2010 is slightly on the darker side. She always paints women and uses animal motifs, but the grotesqueness levels shifted over the first couple years. 2010 to 2011 got straight bloody, with animal motifs being part of the female body. Her later work in oil, however, is sensual and has more actual creatures but less darkness. Her most recent pieces show the greatest shift to something very light, silvery and mystical, with water instead of death being more central and wood often used as a substitute for canvas. 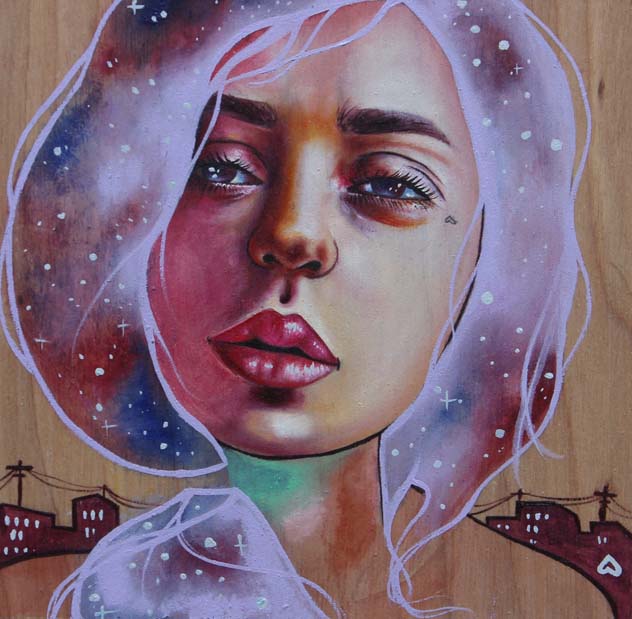 Lindo’s art offers insight into a more contemporary woman. Her influences are sometimes obvious—beautiful flowing hair, full lips, perfect shapes. She admits that a childhood filled with recreating Disney princesses made it easy for her to stick to the female muse. However, some recent inspiration has come from non-gender specific images she sees on social media, and she has started experimenting with painting men as women.

Since her switch to oil, Lindo has started showing in galleries across California and that exposure has pushed her to another level, she says.

“I would do a lot of Santa Rosa stuff but then I started showing in the city [San Francisco] and LA, which is a completely different talent,” she says. “People move to L.A. to be artists and you have to stand out. I still feel like I have a lot of work to do and a lot of growing to do. You shouldn’t compare yourself to others, but you can let it influence you and grow from it.”

Influences on Lindo come from a childhood that will harmonize with many young women in her age group, in a hilariously nostalgic and happy way. She is obsessed with Sailor Moon, the female anime character that blew up in the United States in the ’90s and still has a large fan following. It’s the only anime she likes or watches. 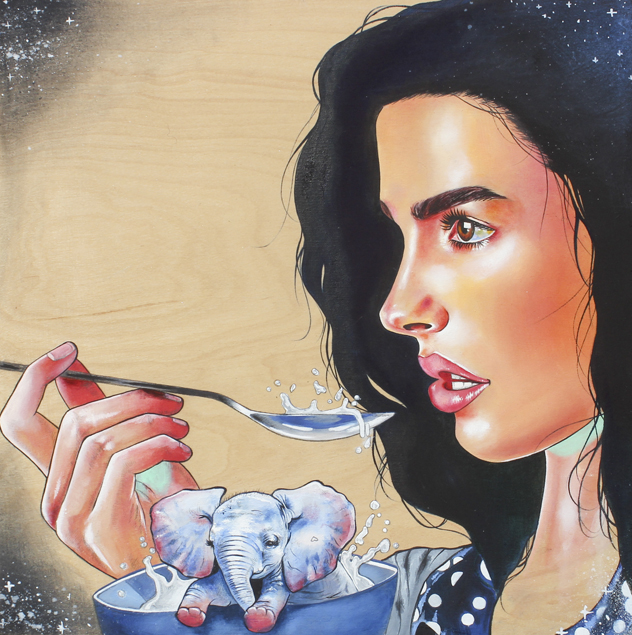 “I’m obsessed. I was on Amazon today and I bought a Sailor Moon teacup,” she says, her boyfriend laughing in the background. “I literally have dreams about Sailor Moon like every other night. It’s so weird, but what happened was when I was in Canada when I was like 8 years old, I watched it every day back when there were new episodes coming out. But then we had to move to Central America—my parents are from Nicaragua—and I couldn’t finish the episodes. It was the end of my life at that time.”

Lindo thinks the sudden move and trauma that came with it possibly affected her more than she realized, and the imagery of what she remembered as a child showed up in her artwork. As she got older, other situations also came to life in what she drew.

“I think when the girls I was drawing were really zombie-ish, my life was tough at that time. But then my life changed,” she says, referring to when she met her boyfriend and fell in love.

One of her art influences is Sylvia Ji, known for her Day of the Dead women. At 19, Lindo saw an interview with that artist in which she said some of her best work was done was when she was very depressed. As a young artist, Lindo was blown away by this, she says.

Artists who delve in mythical images, animals, and surrealism impact Lindo most because she likes to paint what she dreams, and that’s usually where her mind wanders. 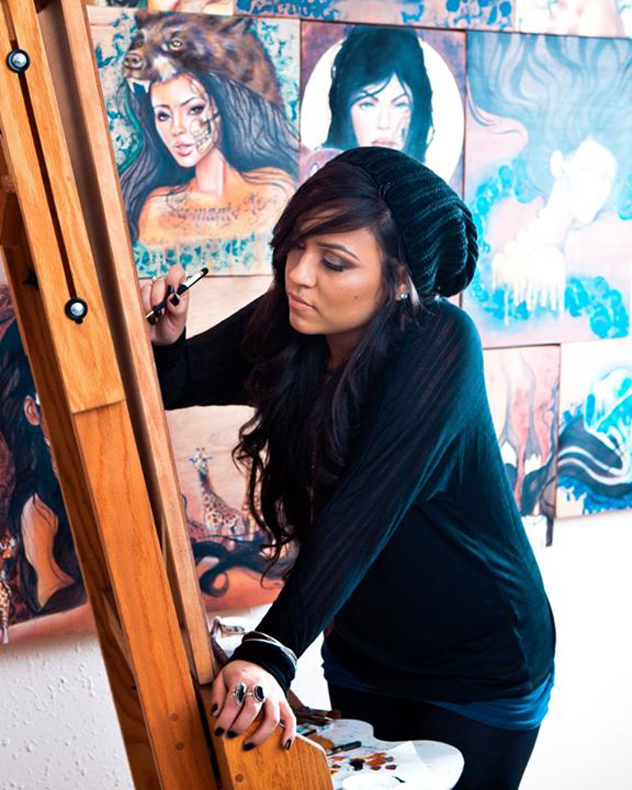 “I always want to paint something that I could wish come true,” she says. One of her wishes, for example, is to have a miniature zoo, where all the zoo animals are alive but tiny. Thus in some of her paintings she will have a tiny elephant hanging out a cup held by a distressed woman, or a small panda on a chopstick.

Her colors lately also evoke a more surreal theme, with pastels on wood causing a transparent effect. The women seem to be wisps of their actual selves and images of water and hair flowing only add to their transparency.

“That’s what I like to see in other people’s art too—something impossible,” she says.

To get a closer glimpse into the dreams and wishes of MJ Lindo, check out her show, running now through Sept. 12, 2015, at Lux Quaubas Gallery, located at 106 K. Street in Old Sacramento, or visit her website, Mjlindo.com.