A bizarre creature slithers alongside the brick wall of the Oak Park Brewery. Somewhere between pufferfish and kraken, its alien form elicits menace and wonder in equal measure. From a porthole-like opening in its side peers a glowering skeletal countenance, locked in a permanently frozen cackle, delighted to have entered our poorly defended world.

A curious hybrid erupts from the doorway of the Colony on Stockton Boulevard, a kind of bio mechanical sparrow bedecked in sea-dragon’s garb. Peer into the cavernous eyes in the midst of its ornate head and ask yourself, “Is it living? Or is it clockwork?” From what world do such things come, manufactured but intricately organic, natural but forever altered as if under the hand of a 24th century jeweler? In a word, the answer is S.V. Williams.

A Sacramento native resettled in recent years after spending some time in the Northwest, Stephen V. Williams (styled S.V.) has gotten some high visibility of late in the downtown art scene. Several of his works have helped it to expand quite literally, bursting from the confinement of the canvas onto several prominent locations around town. These murals are a specialty of Williams’, whose early background lies in graffiti and other public artforms. Recently, we caught up with the artist at his home and studio to chat about the origin of his work, his Sacramento roots and the challenges of working with an audience.

In August, 1810 Gallery will showcase Williams’ latest works in a more intimate setting with a series called Relics—an apt description of the forms visitors will be introduced to there. Through the shadows and twilight glow of a changed Earth wander magnificent and bizarre creatures, recognizable, perhaps, but having undergone a sea change. Come for yourself, and prepare to get acquainted. 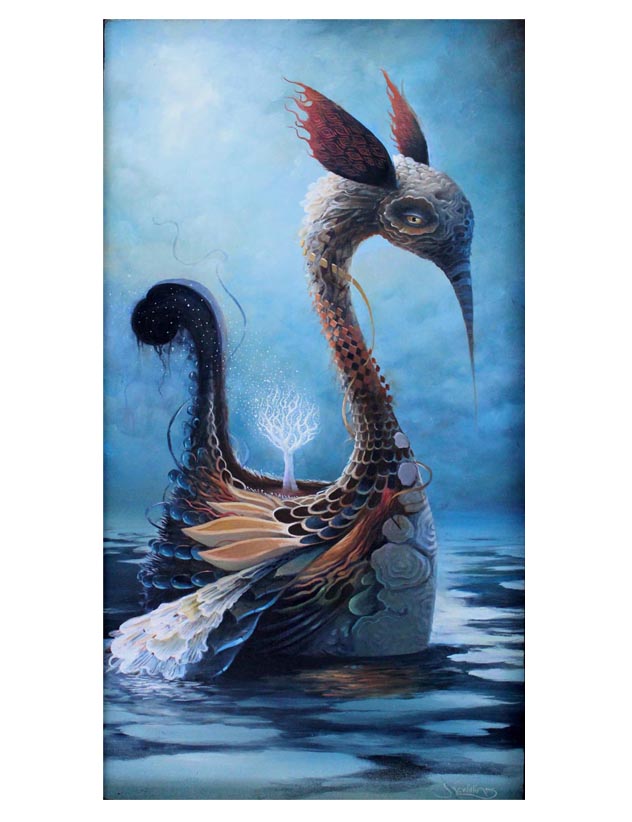 When did you start painting?
I want to say my first painting was in, like, 1999 … It was with spray paint, and, I don’t know if you’ve seen that movie Man Bites Dog, but I did a portrait of the main character in spray paint. At that time, I was so involved in graffiti art and drawing letters, that I was kind of against branching out into conventional painting. I would say that I really started to consider this a full-time occupation around 2007. I had a show in Portland, and I just had a random assortment of my paintings with me, and this gallery owner in Portland wanted to give me a solo show. At the time, they weren’t very cohesive as a body of work. I had that show, sold some paintings, and got some amazing responses, so after that I told myself, “I’ve got to stop working at this pizza shop and eating pizza all the time and just paint.”

I took some community college classes for art—mostly gesture drawings to get structure and balance down. But I’ve just been doing my own thing, since I started drawing and painting. I haven’t really felt the need to go to art school. I just keep going, developing my own style, doing what I want to do. 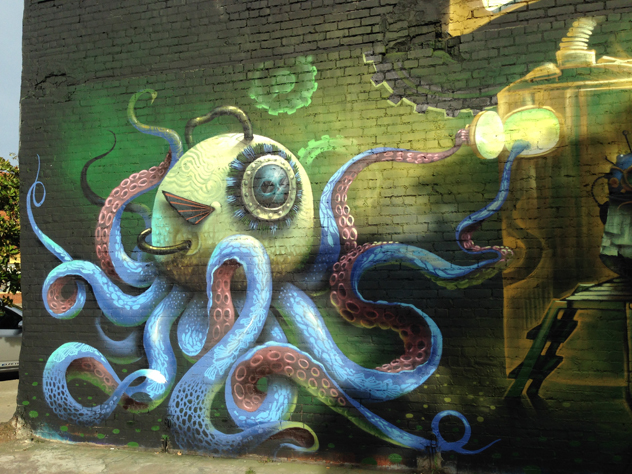 Is there more a feeling of pressure when you’re doing mural work in public?
When doing a mural I always want to get a basic image down immediately, because when you’re out in public like that, people will see you doing the first part of a work, and though as the artist you know what the final result will look like, they’ll be like, “What are you doing?!” [laughs]. That actually happened to us over at the Oak Park Brewery. We painted the entire wall black first, and were laying down the background when these people came by. We were like, “Hi, how are you doing?” And they replied with something along the lines of, “Well we were doing great until we saw this.” It was in a stage where there were no concrete images laid out yet. So I always try to work fast. Still, I’d say that murals are my favorite work to do.

Contained paintings are great too, because I can isolate myself, hang out with my painting, have beers with my painting. But I just love being outside, and even if there’s a weird reaction from people, I still like getting reactions from people. Even if someone calls it stupid, I’m like, “Thanks for actually noticing it,” you know? Some people will just walk by and look at it and nonchalantly look away, and it’s like, “Do you not know there’s something being created here?”

In what kind of world do your paintings exist?
I guess you could say it’s a little futurist. The way my figures look is what has happened to life on Earth: deformations. It’s kind of dark to think about, but I imagine something similar to animals in the sea that have been around so much trash and debris that their bodies grow around a certain thing because it just got stuck onto them. I kind of see them as a new breed of animal that have survived something. They’re kind of mechanical, too. 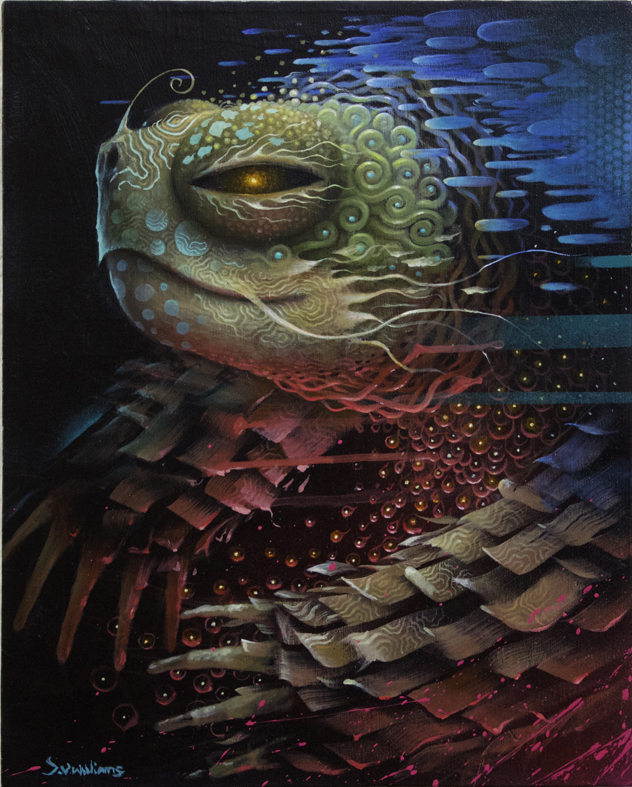 There’s a large focus on animal forms in your work. Have you always been drawn to this subject?
I’ve always been fascinated with all different types of animals, especially birds and fish. The piece I’m working on now is a stag. I grew up camping a lot with my dad, so I’d see a lot of animals. I’d never hunt or anything, though. What I do to them on the canvas—I feel like I age them, put them in an alternate universe where nature is bound to the animal but there are also mechanical elements, like scales or feathers that resemble metal plating or armor.

But they’re not completely like machines—there also seems to be a warm feeling in these works.
Yeah, especially with the light that I try to add in. A lot of the time I tend to paint really dark, so the light colors really give the painting a warm, soulful feeling. And there’s usually some kind of relationship with the painting and another creature, like moths floating around them in the background. I don’t paint people often. I just find animals, and the mystery about them, to be far more interesting. 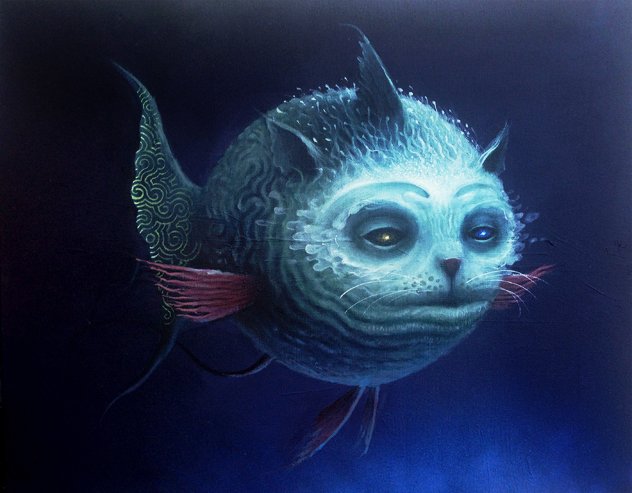 What were your earliest visual influences?
Definitely comic books. I was very into drawing comic books. What pretty much got me to start drawing was, I would just kind of emulate different characters and create my own. And I would always kind of piece things together. How my current drawings come about is, there are tons of different pieces of things but the general structure of it is obviously a certain animal or a certain insect. I usually start off with a rough sketch, sometimes just of a particular feature—the scales, for instance. But as far as comics, I was always into the darker stuff, like Todd McFarlane’s Spawn; there have been a lot of horror and sci-fi influences.

I also hear that you did tattoo work for a while?
I apprenticed for like a few months. One thing—you’re in the shop all day, waiting for people to come to you. I know a lot of tattoo artists, a lot of my friends are tattoo artists, and they make good money doing it, but I would have had to switch around my style a little bit, change things up, make my work a little more traditional looking. I didn’t really want to take the time to relearn my art from the beginning. It’s definitely a skill I appreciate. But mostly now I’m into painting, illustrations, and I’m starting to get into some clothing stuff too. In fact, I have a screen press I’m working on right now, so I’m going to start making some shirts. Throughout the duration of the show, I’ll try to get some of those in the gallery, as it will be up for a month. 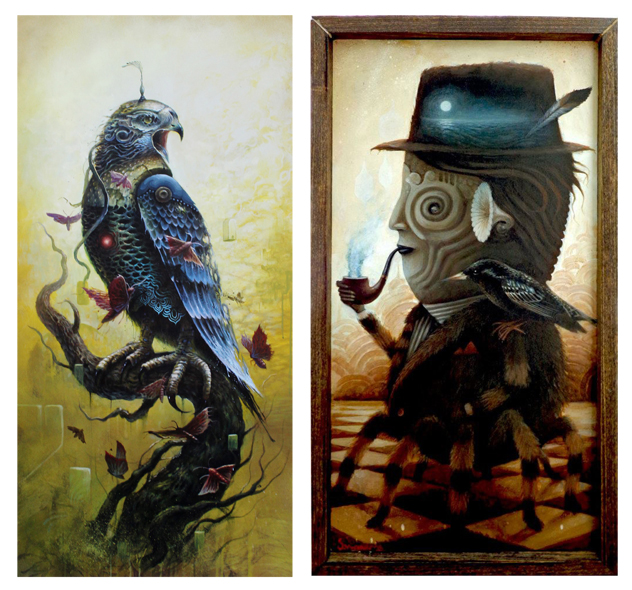 What have been your most rewarding experiences as an artist?
I do a lot of murals and group shows in L.A., and I also do a lot of music festivals. There’s this one big one, Lightning in a Bottle—that’s probably the best time I’ve had as an artist. There is like 60 live painters there, and it’s cool because there’s this big auction at the end and so the whole time you’re there you have the potential to make money. They set up artists all around the festival, and they try to keep them around each other so there’s not some artist who’s way out in the parking lot. But on the last day, they bring all the panels into one area, and so they just like surround this space full of art, and it’s like an art walk. There was also this collaborative piece I worked on with a friend in Coachella that was huge, and somebody bought that. I actually hit up TBD about that, because it would be awesome to have something like that. The music at these events is definitely a big part of my process. When I’m listening to good music, I paint so much better. I was at a Concert in the Park not too long ago—I was set to be painting out there—and I couldn’t get into the music at all, and I could not paint at all.

What’s your go-to painting music?
I listen to a lot of Mogwai, Sigur Ros, things that are a little tripped out. I really enjoy listening to instrumental music, and I can become engulfed in the piece I’m working on. Especially for like a new series of paintings, if there’s a new album, I’ll just constantly listen to that, and I find that a whole series of my paintings will be cohesive with that album. 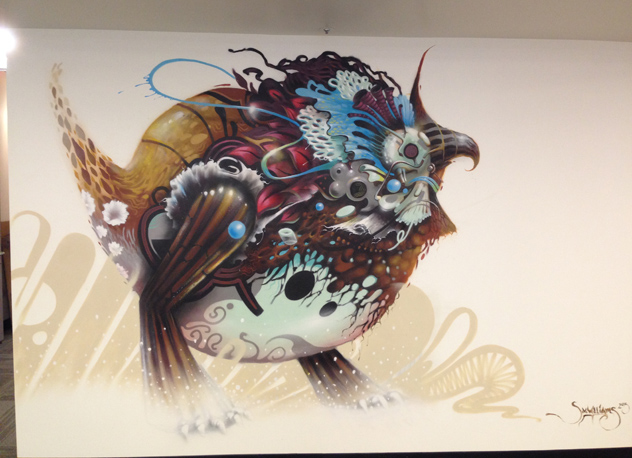 How would you describe the local arts scene?
The artistic community is awesome. It’s growing so much and there seems to be more people and businesses that are willing to showcase murals and other public works of art. I feel like Sacramento is a little bit behind in that sense, because when people hire you for murals, it has to be tied in with the business some way. Like, if I draw one of my creatures it has to be holding a cheeseburger in its hand, or wearing Nike shoes. If you give an artist full creative freedom, then there’s just going to be that much more unique work around town. But just having artwork out in public all the time is going to inspire people, drive artists to push themselves.

To learn more about S.V. Williams and get a glimpse of his latest work, you can visit his Instagram page at Instagram.com/svwilliamsart. You can check out the opening reception for his exhibit Relics at 1810 Gallery (located in the WAL, 1810 12th Street, Sacramento) on Aug. 7, 2015, from 6 to 10 p.m. Check out Facebook.com/1810gallery for more info and upcoming shows. 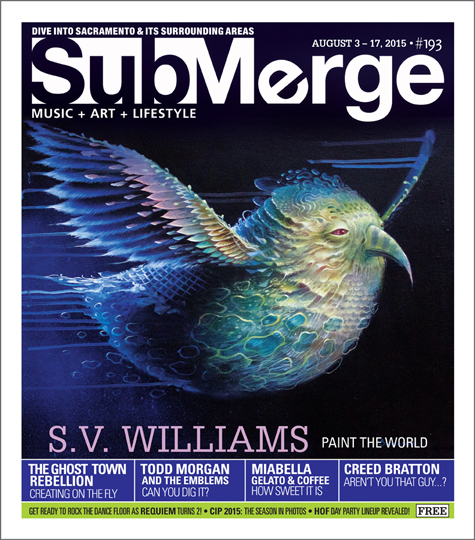