Rob-O Tells All About His Sweet, Sweet Art

It is not uncommon for Rob-O to buy 900 pounds of sugar at once. In fact, in a recent phone conversation, he stated nonchalantly that he had done just that about a week before.

Why all the sugar? Rob-O makes sugar skulls from his home studio in Elk Grove as an art. He makes a lot of them, and sometimes he makes them big, as in, 35 pounds of big. If you are going to go for it, you might as well go all the way, right?

For those who aren’t familiar, the tradition of making sugar skulls stems from the Mexican holiday Día de los Muertos, which, in English, means Day of the Dead. On Nov. 1 and 2 of every year, people celebrate Día de los Muertos by visiting the graves of deceased family members and friends, and creating altars in their memory. The altars are showered with gifts of all kinds, like tequila bottles, toys, candies, photographs, flowers—anything the now-deceased would have enjoyed—and decorated with marigolds and sugar skulls, or “calaveras de azúcar” in Spanish.

Sugar skulls typically found on a Día de los Muertos altar are small and cutesy. They are colorful, made of edible chocolate or sugar, and traced with frosting lines that shape the eyes, nose, mouth and several small flowers or designs.

Rob-O first began making sugar skulls in a similar fashion five years ago. Since then, however, he has taken it to another level.

Like the traditional sugar skull, Rob-O’s are made out of pure sugar. From scratch. Don’t get too excited, though. As delectable as they may look in the photos, you can’t eat them. Rob-O’s sugar skulls are not only encased in handmade oak shadow boxes, they are covered with a moisture barrier for the sake of longevity. And he is willing to bet they can last more than 500 years. You probably don’t want something like that in your system.

The first part of the process, forming the blank skull, is straightforward. It’s kind of like making a sandcastle, he explains. You mix sugar, meringue powder and water, and pour the mixture into molds. Then you flip them out of the mold and let them air dry. If he really puts in the time, Rob-O can make as many as 130 plain white sugar skulls in a day.

The real artistry is what follows, though, when he decorates each skull with royal icing. Each skull is elaborately masked with a maze of intricate, bright, filigree-like frosting lines, swirls and dots, many adorned with massive frosting headdresses, and each completed with a pair of glass jewel eyes.

“The eyes have to have a shimmer,” Rob-O says. 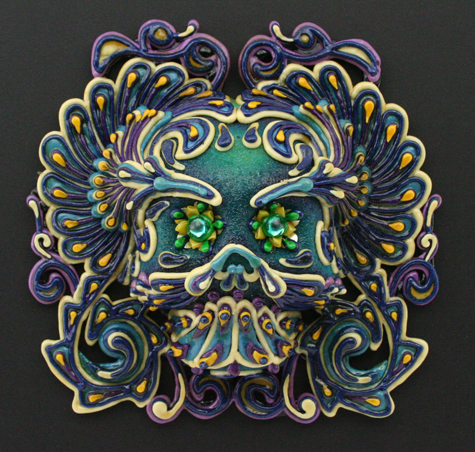 Some of his most intricate line work can be found in his series called Siblings, in which the skulls are paired into duos, and Feng Shui, where the skulls are partnered in groups of three, each representing Earth, fire or water. The work is so ornate the noses and mouths can get lost in the details on first glance.

Arguably one of his most impressive pieces, though, is the sugar skull he designed for a San Francisco Giants fan. The Golden Gate Bridge and two baseballs are perfectly absorbed into the headdress, in addition to the Giants’ “SF” logo. Not bad for someone who doesn’t watch baseball. 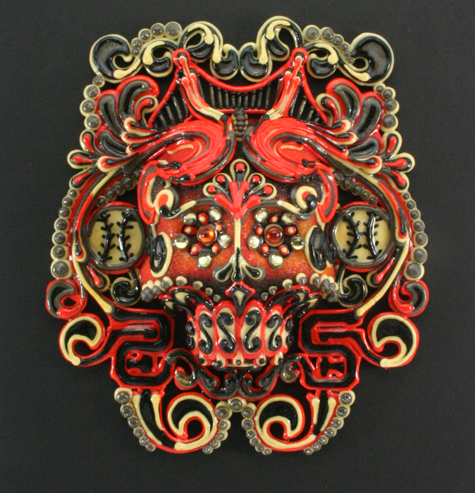 After his sugar skulls are painted, Rob-O airbrushes each one with food coloring, covers them with a moisture barrier, and seals them in a shadow box. Aside from the glass jewels, the handiwork is 100 percent him. At most, he might make eight to 10 of these custom-made skulls in a month.

Rob-O began making sugar skulls as an emotional release. It started five years ago, when his mother passed away. It hit him, hard. Little did he know what was ahead.

As he says in hindsight, “from tragedy comes greatness.”

He pauses. When it comes to his story, that couldn’t be farther from the truth. After his mother’s passing, Rob-O was looking for something positive to fill the void. With his wife’s encouragement, he decided to make a Día de los Muertos altar in his garage to celebrate his mother’s life, and invited 30 friends over to decorate sugar skulls.

His first attempt at making sugar skulls was not unlike most people’s first attempts. The frosting wasn’t thick enough, and it had a watery consistency.

“Why do all of our sugar skulls look so sad?” he remembers asking. “It was heartbreaking.”?

His skills improved the following year, however, and three weeks after celebrating Día de los Muertos for the second year in a row, Rob-O was still decorating leftover sugar skulls. He had no idea what to do with them afterward, until his wife suggested that he try selling them during Second Saturday. He had made art all of his life, but had never been pushed to sell it up to that point. As it turned out, people liked his work, so he kept making them. Before he knew it, making sugar skulls quickly evolved from observing a tradition to an art form. He started airbrushing his skulls with food coloring, and detailing them with dots.

Next thing he knew, one of his friends, a tattoo artist, challenged him to make a giant sugar skull out of Styrofoam that he could put in the tattoo shop.

He accepted the challenge. But, he wanted to keep the sugar skull tradition true.

“Celebrating [Día de los Muertos] for my mom, decorating real sugar skulls, and understanding the level of importance of what a real sugar skull is, I didn’t want to make it out of Styrofoam,” he says. “I wanted to make it real.”

So he went home and made a mold for a 35-pound sugar skull. By the time he was done, he realized he didn’t have a plan for getting it mounted onto a wall. Fortunately, his construction background kicked in, and Mija, Rob-O’s first large sugar skull, was a success. Since then he has made three more 35-pound skulls, and one 55-pound skull.

Still, some people just needed to see his work in a shadow box to be convinced that his work was “art.” When he first started pushing his sugar skulls in the art world, he often heard people refer to his work as a “craft” instead of an “art.”

That’s when he began putting each of his pieces into shadow boxes. The reaction was hard to miss.

As he quickly began to notice, “once framed, the perspective changed.” 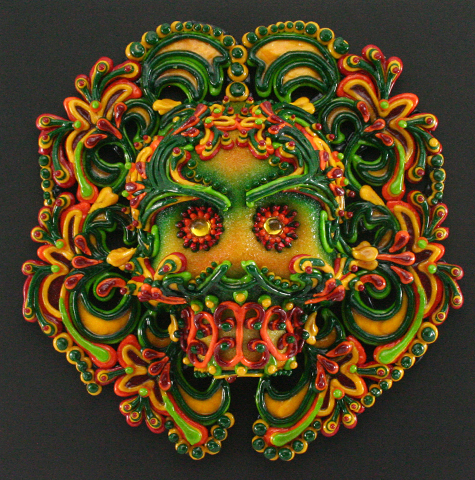 Fast forward five years, and Rob-O now makes sugar skulls year-round, selling each skull or set of skulls in shadow boxes. He is regularly commissioned for his work. Take a look at one of his pieces and you will understand why.

And, his work has gotten plenty of notice in the public eye. Last year, his work was featured in 46 different shows. He has shown his work at Sacramento’s All-American Tattoo Festival at the Convention Center, as well as at the San Francisco Symphony’s Día de los Muertos celebration. Last year he made it into the Sausalito Art Show, and Mija also won “Valley Sculpture of the Year” at the state fair. Currently, 11 of his pieces are being shown at the California Museum, including one of his 35-pound sugar skulls, alongside an interactive Day of the Dead community altar.

In his spare time, Rob-O also visits schools to teach the history of Day of the Dead, and how to make sugar skulls. In fact, as we spoke on the phone, he was making 750 blank sugar skulls to take to a cemetery for a similar demonstration.

His next plan is to donate a piece to a museum in remembrance of his mother. That way she can be celebrated every day, he says.

And, eventually, Rob-O hopes to make the world’s largest sculpture. Lord knows how much sugar he will need for that.

On Oct. 19, Rob-O will be a featured artist at the Sugar Skull Festival in San Jose, Calif. Locally, you can head to the California Museum to see his work as part of the Day of the Dead: Art of Dia de los Muertos exhibit, which is running now through Jan. 5, 2014. A hands-on demonstration on how to decorate a sugar skull will take place on Oct. 26. Learn more about the exhibit at Californiamuseum.org. For more Rob-O, go to Ilovesugarskulls.com.