In the Moment with J.B. Smoove 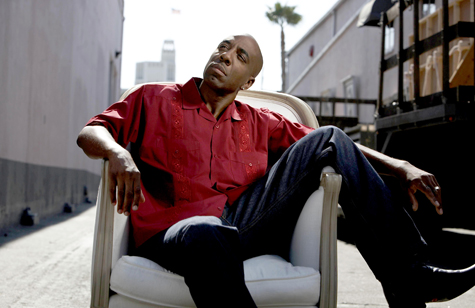 J.B. Smoove lives and creates on the fly

The birth of Jerry Brooks’ first child (his now 18-year-old daughter) was a pivotal moment in his life in more ways than one. Brooks was working as a graphic designer for a T-shirt company around the time his daughter was born, doing stand-up comedy at nights. But the arrival of his baby girl brought him to a crossroads. He decided to veer away from the comfortable path of his career and immerse himself in comedy and acting. In retrospect, it was a very wise decision.

“I quit my job,” he says. “I felt like the only way I can dive in there and do this comedy stuff, I’d actually have to do it. When you have something to lean on, you can’t really achieve your dreams, because you’re always leaning on something else. I said the only way I’m going to be able to do this is if I go full throttle, so the day she was born, I quit my job, which made me have to do it. It made me have to get out there and get downtown and do gigs and go on auditions and get photos taken. It made me have to do all these things to keep the lights on.”

A risky leap of faith with a new mouth to feed at home? Maybe. But it turned out to be worth the gamble. You probably know Brooks better nowadays as J.B. Smoove–who in addition to having a successful stand-up career and being a former writer and performer for Saturday Night Live– has rose in popularity as Larry David’s hilarious foil Leon Black on HBO’s Curb Your Enthusiasm since its sixth season. Prior to his life as a comedian and actor Brooks was in school to be an engineer, receiving a associate’s degree in engineering before the math caught up with him and he decided to move into graphic design.

“I think about The Brady Bunch, and the dad was an architect, and I was like, ‘Damn, no one mentions this part.’ They don’t show the math part; all they show is him walking around with the blueprints and looking real cool,” Brooks says. “But that math will kick your ass so bad, it will make you switch your major.”

A life as a comedian eventually won out over more traditional pursuits. He admits that becoming a father and making the jump into a highly competitive field was “challenging,” but it was the difficulty that drove his passion.

“I get a high off of challenges,” Brooks says. “Even not knowing what I’m going to do in a scene, if they don’t give me any lines, even if not knowing all that stuff, I get a certain kind of energy from that too. Part of me is like, ‘What the fuck am I going to say?’ and another part of me is like, ‘I can’t wait to say what I’m going to say.’ It’s like…someone’s leading you down a corridor and downstairs, and you’re blindfolded, and you don’t know where you’re going.”

Taking that into consideration, it’s clear that Brooks has the perfect mental makeup to excel in a show like Curb Your Enthusiam, which is largely improvised. He explains that the actors were given eight-page synopses of each episode as a sort of guideline, but Brooks says that he never really read those.

“I don’t like to see the outline, because I feel like I’m going to over-think my scene,” he says. “So I just get to the set and allow the writers to tell me what’s going on…I like to go off instinct and what I’m feeling in the moment.”

In this way, Leon Black has become a real person to Brooks, much as the character has to his many fans–or Leon Nation, according to Brooks.

“I find myself talking about Leon like someone I know,” he says. “I would do a bunch of Leon scenes, and on my way home, I’d call my wife and be all, ‘Leon is crazy as hell!’ And my wife will be caught up in it too. She would say, ‘What did Leon do today?’”

Diving headfirst into his character is something Brooks really enjoys.

“It’s hilarious to talk about him as if he’s some other person, which I find to be a better process,” Brooks explains. “I’m more in that frame of mind when the cameras roll. I don’t feel like I have to jump into it. I can just have him ready to go, get dressed, walk to the set and allow him to do what he does. And when I leave, I have the chance to talk about him over the phone to my wife and to my friends. Leon’s a damn fool!”

This sort of approach has fueled his stand-up, which has always featured a good deal of improvising. In the early ‘90s before he broke into stand-up, he got his feet wet by taking an improv class, which taught him how to be comfortable with creating on the fly. Brooks claims that you’ll never see the same J.B. Smoove comedy show twice.

He keeps his sets different and fresh by being observant. The day’s weather may inspire him, or perhaps even an everyday object like a stool could be incorporated into his act. Brooks says that he also likes to get around the town he’s in and get a feel for it to find out “what’s funny about that city.”

“I think that’s what makes you in that moment, because you’re actually visiting, and you’re performing in their city,” he says. “You’re bringing everything that you do to them, because you have to let them know what you noticed about being here that’s so cool and so funny.”

The venue itself could also play into his performance. Brooks recalls playing a nautical-themed club called Captain Brien’s in Marco Island, Fla. The dÃ©cor, which featured fish nets on the ceiling and a replica shark bursting through the wall by the stage, ended up playing a big part in his act.

“Man, I must have did 20 minutes on just that stuff alone,” Brooks says with a laugh. “Somehow I took all of that stuff and made an episode of SpongeBob SquarePants out of it.”

The exciting thing for Brooks is that a performance like that is pretty much unique.

“It was so damn funny, but I realized I could never do it again,” he says. “I could only do it there. It was a one-shot deal. I couldn’t go to Chicago and do that same bit, because it wasn’t the same setting.”

His reputation for off-the-cuff gems such as this and the celebrity he’s garnered from Curb Your Enthusiasm has really started to pay dividends. Next year, Brooks will be featured as the voice of Harold alongside household names such as Billy Crystal, Steve Buscemi and John Goodman in Disney/Pixar’s Monsters University. Familiar with his work, the filmmakers allowed Brooks a lot of freedom to create with his character, which turned out to be a lot of fun for the actor.

“They let me get in there and play around with stuff, which is great. It’s more comfortable. It’s easier to create on the go,” he says.

Brooks will also be featured as the voice in two other animated films slated for 2013, according to IMDb, Hell and Back (as Sal the Demon) and Smurfs 2 (as Hackus).

Between that and his stand-up career, Brooks will have plenty on his plate in the year ahead. But what about Curb Your Enthusiasm? Season after season, It’s always anyone’s guess whether or not the show will return to TV. As Brooks puts it, “I think we’re always at the mercy of Larry [David], so we’ll see what’s going on. When you’re that damn rich, you don’t need a paycheck, you know what I mean?”

But Brooks has been in contact with David and reports that another season may be in the works.

“I give Larry a call off and on just to see what the hell Larry be doing, just to see what kind of adventure Larry is up to,” Brooks jokes. “You gotta check on rich people just to see what the hell they’re doing. What boat you on, Larry? Where you at, what country you in? What room are you in, in your big ass house? Which car are you driving? I like to check in on Larry David once in a while just to see how he’s doing. So far, there’s no definite answer right now. I’m thinking possibly some time in 2013, that’s going to be the platform right now for it. I don’t think it will be any time this year. So I think next year he’ll make his mind up.”

Until then, fans have a chance to catch Brooks live, in-person as J.B. Smoove, bringing the ruckus as only he knows how. It’s hard to say what to expect from one of his comedy shows, but it’s a gamble worth taking.

You have multiple chances to see J.B. Smoove live when he plays five sets in three nights at Punchline in Sacramento, July 19—21, 2012. Tickets can be purchased through Livenation.com or http://punchlinesac.com/