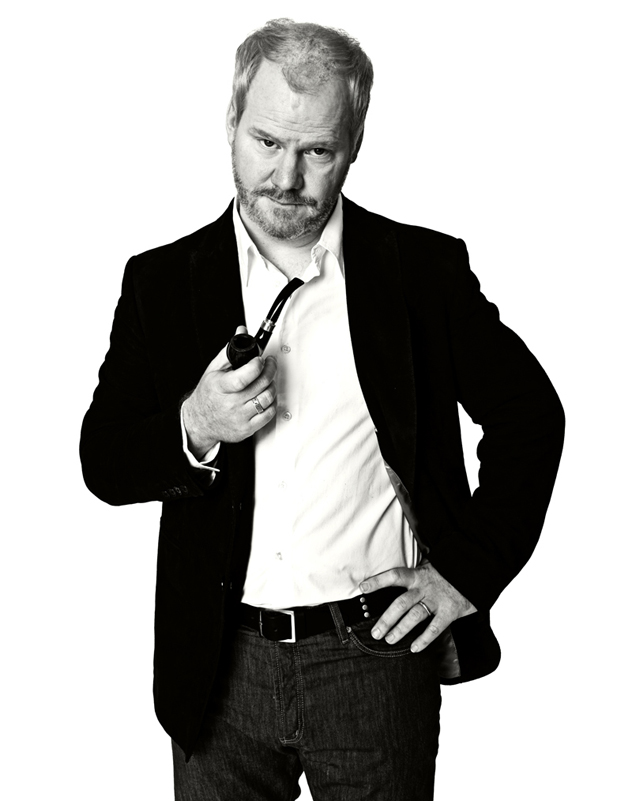 Author, actor, comedian, father: Jim Gaffigan wears many hats and does so quite well

Jim Gaffigan called 15 minutes late for his interview with Submerge. This isn’t a rare occurrence for us. When you’re in the business of talking to creative people, you’re often at the mercy of their whims and schedules. Sometimes, the sheer number of interviews a subject may have scheduled for a day is the cause for the delay. Sometimes they just simply forget (creative folks aren’t always the best at keeping time, after all). Gaffigan had a different reason, though, for calling late. He had to pick up his kids from soccer practice.

It’s this sort of regular-guy quality that makes Gaffigan’s comedy so accessible. Working mostly clean and steering clear of sexually charged or controversial topics, Gaffigan is wholly relatable. He’s sort of a breath of fresh air in a time when making a name for yourself in the world of entertainment follows how far you can push the envelope. Gaffigan is just a regular guy, the kind you might bump into at your local grocery store, children in tow. The difference here, though, is that he’s outrageously funny.

Gaffigan’s quiet style and measured way of speaking (he calls himself a “slow-talking Midwesterner”) belies his razor-sharp wit. His latest special, Mr. Universe, which was released on his website on April 11, features the comedian riffing on topics from parenthood to his difficulties with staying in shape to fast food restaurants. Though his topics may seem ordinary, he has the uncanny ability to find the hilarious in the mundane.

In May, he released his first book, Dad is Fat, a rumination on his life as a father of five children. He says he began writing the book because he didn’t want his “whole standup act to be me talking about my kids.”

“As an observational comedian, I’ve been given four opportunities to go through pregnancy, the delivery and just living with a baby, so I should probably think about doing a book,” he says. “It took me a while to figure out with what type of book. I knew my point of view—what it would be—but figuring out the whole idea of the book, which is I have no idea what I’m doing.”

In the following interview, Gaffigan talked a bit about parenting and also about his search for creative fulfillment, including his appearance on Broadway in That Championship Season in March 2011.

In your Mr. Universe special, you were saying you had four children, but now you have five, right?
My wife was pregnant when we were shooting Mr. Universe, and then the baby came. We released it on my website, and I thought, OK, I’ve done that “I’m overwhelmed with too many kids thing,” and then my wife got pregnant again. It just made it a little bit more absurd.

You said the book is about you not knowing what you’re doing. Now that you’ve had five, has it gotten easier, or is it even more difficult because of the sheer multitude of children?
I would say that my skills have improved, but because of the number of children we have, it’s much harder.

In one passage in Dad Is Fat, you wrote that you found yourself clapping your hands really loud like your dad used to do, which you always hated. Now that you’re a father yourself, do you find yourself becoming more like your own father?
You’re very aware of what your parents did, and you gain an empathy for why they parented the way they did, but you also are hypersensitive that you don’t want to recreate some of that. I think my dad is more of a result of his generation, but I’m definitely much more involved in my kids’ lives. It’s never the perfect amount, and I think I’m focused on having more fun with my kids, whereas my dad was more focused on ensuring that I didn’t become a hobo.

As a comedian you do a lot of traveling, but you’re kind of your own boss in a way, so you can make your own time. Is it a juggling act in that regard?
It’s great. Look, I’m lucky that I get to do what I want, but I’m also lucky because I’m in a position to do theater shows, and I’m in a position to bring my kids with me. I’m bringing my kids with me on this West Coast bus tour.

How is it to bring everyone Partridge Family-style across the country together?
There’s certain chaos. There’s not a lot of sleep. I do a show every night, and we drive at night, and then we have to get up and do things with kids, because we want to do things with the kids. And then there’s the travel pressure. We don’t succumb to it constantly, but if you’re in San Diego and you have a bunch of kids, you should go to the zoo. Like, we’re going to see the Redwoods and stuff like that…

It’s interesting to hear you talk about your family and how you bring them out on the road. I think there’s a stereotype of standup comedians as heavy drinkers…
Degenerates.

Do your peers act differently around you? Do you hang out with other comedians?
Yeah I do. There’s a bit of a stereotype that they’re all hard partiers. There are the cautionary tales, but you can’t keep up being productive with a reckless lifestyle. It’s not good news for people hearing that a lot of comedians are drinking chamomile tea backstage. I get done with a show, and I’ll have a beer, but only my wife’s there. I’m not interested in, you know, but it’s an ongoing thing. It’s weird. The entertainment industry is a strange thing where you can buy the hype, and that’s just kind of silly.

I thought it’s really cool that you work clean. I also liked that you seem to heckle yourself on stage. Like, at one point in Mr. Universe, you were joking about shoes, and then you shot yourself down by saying, “Oh, what’s he going to do, make jokes about socks next?” before going into a bit about socks. Is that something you’ve developed over time?
Talking for the audience, or talking for someone else, I remember doing that as a teenager. It’s just an effective way to disarm someone… There’s a confessional quality to it.

Was it born out of nervousness or stage fright or something like that?
It’s really kind of counter-intuitive for a comedian to criticize his own act. It was much more of a taboo when I started doing it, because what that tells the audience is that, if they misinterpret it, you don’t have confidence in the jokes. If you don’t have confidence in the jokes, then they can go after the jokes, if you get what I’m saying.

Why do you think you’re able to make that work then? Is there something about your demeanor that makes that work really well?
I don’t know. It’s weird. You can overthink it, but I think there is an everyman quality, or maybe that I’m a goofy looking pale guy. I don’t know. I think people are attracted to a sense of vulnerability on stage. So often—I always say this—comedians get credit or criticism for the type of comedy they would do anyway. I did have some curse words occasionally. It wasn’t a big sacrifice for me to get rid of them, so then there are people who think it’s great that he’s clean, or some people who think it’s horrible that he’s clean. I’d love to take credit for it, but I really had nothing to do with it. If you’re talking about bacon, it’s probably not necessary to curse.

Before, you were talking about doing shows on Broadway. What was that experience like for you? Was that something you always wanted to do?
I never expected I’d have the opportunity to do it, to be honest. I loved it. It’s exhausting, and you’re really doing it for the right reasons, because the likelihood of doing a play changing your life is pretty slim in this day and age. It was really rewarding. I’d love to do another play if I was in the position to get the same opportunity, meaning an amazing role.

Standup, to me just being a fan, would be the most nerve-wracking thing to do because you’re up there all by yourself. Acting in a play would be second, because you have to remember all those lines. Do you think doing standup gave you a leg up on acting for the stage?
I think they’re two pretty different skills, but I love acting. I love being a cog in the wheel of the scene. There’s the fourth wall when you’re doing a play where people are observing it. Standup is much more of a conversation. It’s fun to do the different things.

Is there any role in any play that you’d love to take on?
There’s the Paddy Chayefsky play, Marty. I’d love to play Marty.

Any particular reason why?
I just like that story. I haven’t seen the movie in forever. I might have to see it again. I just love the simplicity of the story, this regular guy who’s trying to find his way.

You’ve done stage acting and been on television and in movies. You’ve written a book. Is there anything in entertainment that you haven’t done yet that you’d like to do?
It sounds corny, but I just want to find creative fulfillment. There was something creatively fulfilling about writing a book. In the end, I held a book and it was something I wrote with my wife. It’s weird. I think when I started, I didn’t see myself doing theater, so I’m just keeping an open mind. There’s nothing in particular.

You talk about creative fulfillment, is that why you try a lot of different things? Is that what you’re really striving for in all of your work?
Yeah, I think you have to create your own opportunity. I know that the book is something I could do, but if I was like, “I want to be the lead of a serious dramatic movie,” that’s not something I have control over.

See Jim Gaffigan live when he comes to the Sacramento Community Center Theater on July 15, 2013. The show starts at 7 p.m., and tickets start at $36.75. They can be purchased through his website, Jimgaffigan.com. You can also download a DRM-free version of his latest special, Mr. Universe, on the site for just $5, $1 of which will go to benefit The Bob Woodruff Foundation, which helps veterans and their families. 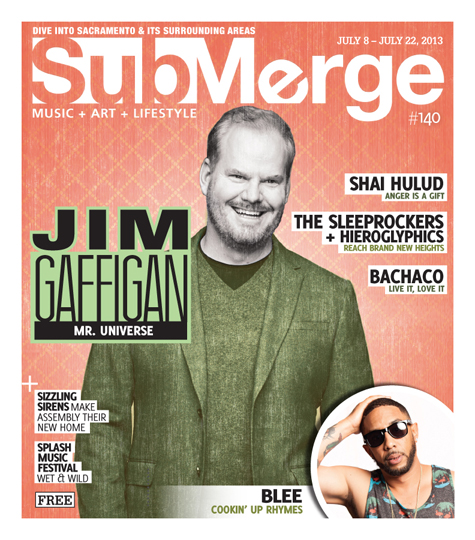