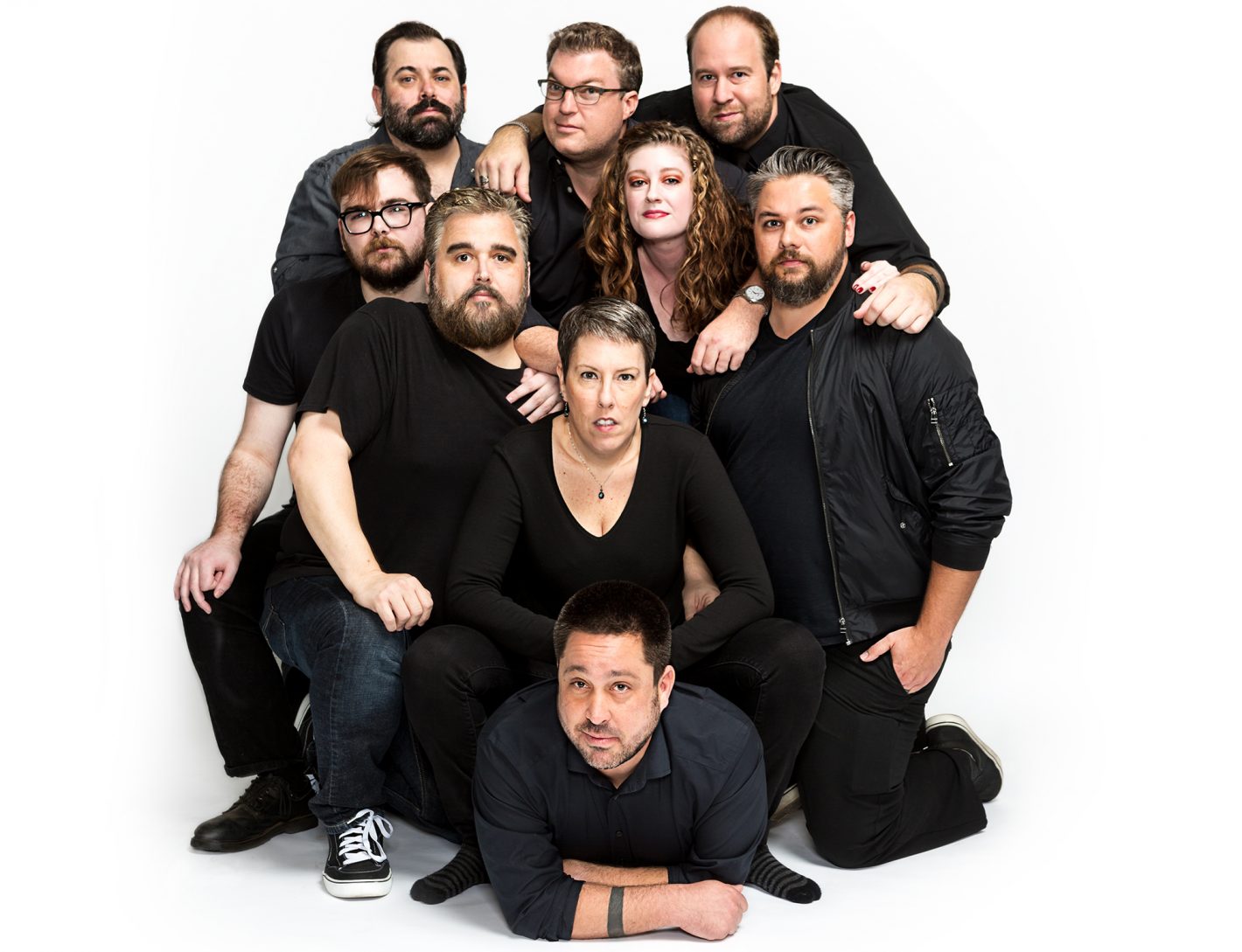 With bad chemistry and personality conflicts, it’s not uncommon for an improv comedy troupe to fold soon after it starts. Add to that the challenge of finding places to perform and keeping a crowd coming week after week and it’s an even more daunting task. That’s why the 10th anniversary of The Sacramento Comedy Spot’s flagship show Anti-Cooperation League is kind of a big deal.

A fixture of the MARRS building on 20th and J, The Comedy Spot’s 90-seat theater has been home to comedy shows and classes ranging from improv, to sketch, to stand-up since 2005. They have the longest running weekly comedy open mic in Sacramento, and have brought in performers ranging from the beautifully awful Neil Hamburger to legendary Kevin McDonald of The Kids in the Hall. However, the improv classes and shows that consistently have proven to be the biggest draw, and none are bigger than Anti-Cooperation League.

Every Saturday at 9 p.m., Comedy Spot founder and head honcho Brian Crall leads a team of gifted comedians in what likens to “Saturday Night Live without a script.” Each show features a guest who’s interviewed on stage about interesting things that have happened in their life. After the interview, the troupe takes over and performs sketches based on what they’ve learned. With no plans in advance, an earlier discussed story can pan out exactly as told or some fringe element of the tale can become the focus. It can get pretty wild, which is the inspiration for the troupe’s slogan, “Welcome to Crazytown!”

I first met Crall and the ACL crew back in 2012 when I was invited to be a featured guest to talk about my website, retroCRUSH. I didn’t know a damn thing about the show, and they got me talking about my thoughts of superheroes having sex, dirty nursery rhymes and breakfast cereal. After the interview on stage, the crew of improv actors turned out an array of sketches loosely and directly based on the discussion, and it was hilarious. One member acted out the complexities of Mr. Fantastic stretching his fingers to become multiple copies of his wife to have sex with. It’s an image that haunts and amuses me to this very day.

So what does the name Anti-Cooperation League even mean?

“When you’re naming an improv group, you want it to sound cool,” said Crall. “Groups that have puns for their name, or they’re too cutesy are … I don’t know. I had a group called The Improv-a-maniacs and I regret that. I wanted to punch myself in the face afterward. We wanted to have a cool sounding name that sounded edgier or anti-establishment, so we ran around trying to find names, and Aaron Cheesman, who was a local guy in different comedy groups, came up with it. I didn’t know what it meant, but it was perfect.”

ACL has roots going back to a group founded in 2001 called The Free Hooch Comedy Troupe, a sketch comedy group that did short form, game-based improv and performed regularly at “shitty bars,” according to Crall. Those venues included The Stony Inn on Del Paso Heights, where the troupe experienced challenges with a noisy koi pond, and the lobby of a hotel on a hooker-populated stretch of Auburn Boulevard. Soon they opened the first Comedy Spot location on Broadway, before moving to their current home at 1050 20th Street in 2009.

Chris Emery is a five-year veteran of ACL and a triple threat at The Comedy Spot, performing in improv, sketch and stand-up comedy shows.

“I really enjoy getting to know the local people, the different professions and celebrities,” explained Emery. “And we get to learn a lot about the city.

“One of our guests had talked about how their mother had holiday traditions from another country that were different, so we did a scene where someone took their date home for the holidays,” said Emery of one of his favorite onstage recollections. “We kept piling on with all of our weird traditions, like incantations, and I was a crow that they weren’t allowed to look at or they’d get their eyes poked out. We had a guy, Brian Reid, who went to the WWE training center to be a pro wrestler and he had a lot of stories about what that was like. He was on the news for leg pressing the most weight. Anything can happen on that stage. I’ve got into many kissing scenes with Brian [Crall]. At least a baker’s dozen, but it’s always consensual!”

With few exceptions, most cast members from ACL are plucked from a Comedy Spot development program that involves taking classes and being chosen to join a Harold team.

“Harold is the industry standard for longform improv,” explained Crall. “Every theater like ours across the country usually has a Harold team. So we have Harold teams, then you perform on 8 p.m. shows, then you graduate to ACL. It can take a couple of years, but everyone’s learned the same method, and everyone’s on board with how we construct these scenes. And I want to be clear, I want you to mention to DJ Sandhu [Sacramento stand-up comedian] that we don’t have pre-planned bits. A lot of times when you watch short form improv, there’s devices that you know are going to work every time because you play the same games every time.”

Justine Lopez joined the cast of ACL in 2016 after serving as an intern at The Comedy Spot, and honing her skills in improv classes and the Harold Team.

“I was online searching for theater internships so I could get my foot in the door,” recalled Lopez. “The funny thing is that they denied me the first time. I tried one more time and a spot opened up and that’s how I got in. Before that, we had started a theater troupe in summer 2014 and put on free shows at bookstores and the schools. We were practicing in backyards and parking lots. Then The Comedy Spot happened and I was full-time from then on.”

Lopez also writes sketch comedy for the weekly 9 p.m. Friday show called The Friday Show, which mixes stand-up, sketch and improv. She stresses that the thrill of performing improv in ACL is unique and unlike sketch where you can reuse bits that work.

“We never return to these scenes, so they just come out,” said Lopez. “It’s hard because right after that scene’s done, you have to throw it out of your head and make something new. Once I did a scene where we were Tetris blocks and we were morphing into different pieces on stage along with a song. That’s part of the group dynamic that makes ACL special.”

The teamwork and anything-goes atmosphere of the ACL shows are what make every show different and exciting.

“You really have to be in the moment with listening and going on what the person did before you,” said Crall. “I like longform because it’s more grounded. It’s not just getting on stage and yelling, selling people out and going for the cheap joke. It’s a style that builds on itself. Then it gets super funny. We always talk about going to Crazytown by taking a simple idea that the audience can sink their teeth into and taking it to a weird, strange place.”

In the last 10 years, Crall estimates that they’ve had more than 30 people in the ACL cast. The current roster is comprised of the aforementioned Lopez (not pictured) and Emery, along with Corky McDonnell, Greg Sabin, Jason Casey, Jesse Jones, Mel Gelbart, Michelle Daubner and Ryan King.

“We’ve had a ton of really good shows through the years,” reminisced Crall. “Becca Habegger from ABC10 is going to be our guest for the 10-Year Anniversary show, and she’s been on before. She’s a really great guest. We’ve had some good shows with Mark S. Allen, but it was for different reasons. He was really fun because he talks with celebrities, and he got arrested so we can talk with him about going to jail and his friend ‘Outlaw’ he met there that would protect him. We had the Sudz by Studz guys, who are two married guys who make soap. They’re just everyday fun people.

“We tend to have better shows when it’s just regular folks that aren’t trying to make people laugh. We always tell our guests during our pre-interviews, just show up, and tell us some stories about your past, that’s all you need.”

Though, sometimes the irregular guests are equally entertaining. When recalling the time when Sacramento Bounty Hunter Leonard Padilla was a guest, Crall said, “He came out with a long black trench coat and his signature hat. Then on stage he actually whipped out guns. He was fully ready to roll!”

The 10th Anniversary Anti-Cooperation League Show will be held at The Comedy Spot Saturday, Dec. 9, 2017, at 9 p.m., and runs every Saturday at 9. You can also check out their calendar for a wide variety of classes and events focusing on improv, sketch, and stand-up comedy as well at Saccomedyspot.com.