What Do You Want to Talk About? 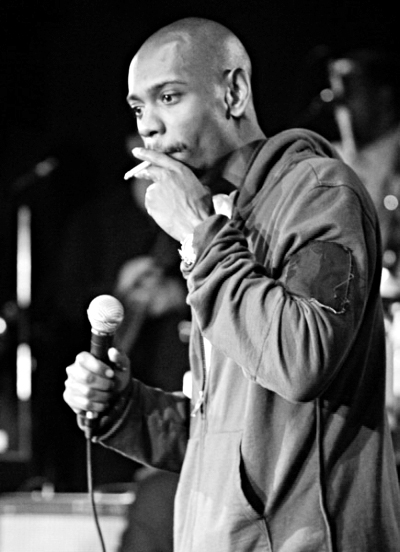 When we first saw Punch Line Comedy Club’s Facebook and Twitter posts on Monday, April 25, saying that Dave Chappelle was coming to town the next night, we nearly flipped out. What comedy fan wouldn’t? After purchasing a couple pricey tickets (about $67 after online fees) the paranoia settled in. “Is this for real?” we thought. “Will Dave freaking Chappelle really show up tomorrow night?” Questions like, “Why was it such a last minute announcement?” and “Will I get a refund if he flakes?” haunted us.

The next night we arrived over an hour early for the 8 p.m. show with four people in our group. After waiting in a rather short line, we were seated. There was loud hip-hop playing via DJ Fuze sitting side-stage, who apparently spins for Chappelle when he is doing gigs in and around the Bay Area. Classic selections from Wu-Tang Clan, De La Soul, Jay-Z and more ignited a little life into an anxious crowd and got everyone chatting louder amongst their tables. Not long after the room was full and the lights dimmed, a voice came over the PA and announced the opening act, Sacramento comedy club regular Ngaio Bealum.

Bealum immediately took command of the crowd with his highly pot-influenced brand of comedy. “I have weed in my pocket, ‘allegedly,’ that’ll make hippies go, ‘Fuuuuuuuck, I’m high!’” Bealum joked. He’s been around the block when it comes to marijuana activism too. He doesn’t just joke around about it. He pointed out that he attends every marijuana-related convention, rally, concert, exposition, etc. that he possibly can in order to fight for his rights. Soon after, he did a bit about how you’ll never see festivals or concerts thrown in celebration of any drug other than marijuana. His example: “Meth Fest!” Bealum dropped the microphone and yelled to the crowd at the top of his lungs, “Welcome to Meth Fest!” He paused, dramatically grinded his teeth, then yelled, “Who stole the fucking sound system?” It got the crowd rolling. Save for when he awkwardly performed oral sex on the microphone for a solid minute or two (which is a long time to sit through, sound effects and all), Bealum’s set was extremely well received and proved to be a great stage-setter for the man of the night, Dave Chappelle.

Chappelle, sporting a hoodie, gray T-shirt and jeans, casually walked onstage moments later to thunderous applause. It’s safe to say the crowd was star struck. Chappelle sat on a stool, lit up the first of many cigarettes and briefly reminisced about when he used to gig at Punch Line over a decade ago. The stool seemed to be a crucial part of his set, as he spent a fair share of an hour-and-a-half sitting on it, delivering material slowly but steadily, smacking the microphone on his knee after delivering punch lines, creating a “thud” sound. It was like a “laugh-your-ass-off-now” indicator. Many of Chappelle’s funnier bits were crowd-involved as Chappelle kept asking questions like, “What is there to do in Sacramento?” to which everyone unanimously decided, “Nothing.” He then asked, “What are we doing tonight?” Everyone, including Chapelle, seemed to be OK with either A) pancakes across the street at IHOP or B) going to the state capitol to “protest some shit,” in Chappelle’s words.

Another question Chappelle asked the crowd that seemed to become a main theme of his set was, “What’s the saddest movie you’ve ever seen?” Apparently Chappelle loves sad movies. “I like movies that make me feel something,” he kept saying. Movies like Hotel Rwanda, Precious, Million Dollar Baby and other depressing titles were somehow made hilarious by Chappelle and his commentary.

At one point, Chappelle let the crowd in on one of his trade secrets, admitting that he frequently writes the punch lines to his jokes first, then the set-up. His latest punch line? “Turns out, I was smelling my own balls.” He tried it a number of ways, setting it up from a different angle each time and nailed each one. “I laugh every time,” Chappelle said of the work in progress. That’s another thing: Chappelle frequently laughs at his own jokes, which in turn makes the crowd laugh because he has a rather silly giggle. Other themes and bits, both prepared and situational depending on the crowd’s (and staff’s) involvement, were his interracial marriage with a Chinese woman; the cocktail waitress Roxy, and whether or not she lived alone in her Yuba City apartment; bumming cigarettes off of crowd members just because he was sick of his own and then giving them back after someone yelled, “You might want to check that!” and plenty of other gut-busting topics.

Toward the end of his time, Chappelle muttered something like, “I gotta get out of here after I finish this cigarette,” and then proceeded to poke around a bit with an engaged couple in the front row. At this point the crowd was worn out, cheek muscles ever-so-sore from well over an hour’s worth of hilarity, but we were willing to take more. Chappelle reached into his pocket, pulled out his pack of American Spirits and lit up another one. Even though there was another show starting in a few minutes, it didn’t look like he wanted to get off the stage; he wanted to sit right there, smoke his cigarettes and engage with the crowd. Throughout the night he has asked, “What do you want to talk about?” and it was clear the answer from the crowd was, “Anything, Dave, anything.”