Couture on the Capital Catwalk 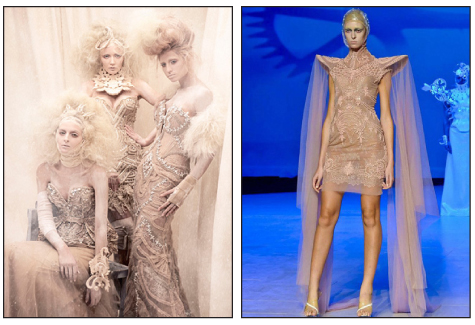 Photos Courtesy Of Furne One

While suits stomp around the State Capitol July 27, 2012 a different kind of walk will get underway west of the building, where Sacramento will receive a rare peek into the world of Hollywood couture.

Music, design and fashion festival Launch has invited several popular designers to show off their creations on a makeshift catwalk inside the Landmark Building at 1011 10th Street for one night. Furne One, owner of fashion house Amato Haute Couture and avant-garde designer for Katy Perry, Nicki Minaj, Heidi Klum, Jennifer Lopez and many others, is one of those designers.

Expect a show-stopping performance from the Dubai-based designer, whose creations have shown up on the MTV Video Music Awards red carpet, concert tours, music videos, Los Angeles and Dubai Fashion Weeks and in the pages of multiple high-end publications worldwide.

“The show will be theatrical,” says Furne’s U.S. representative, Alexandra Alexis Lerma. “The title of the show will be Good vs. Evil and it will be based off movies and fantasy and [be] very imaginative.”

“I draw inspiration from unlikely sources such as music, cinema, cosmic mysticism, vintage and gothic images,” Furne says, noting the collection he’s currently working on, The Last Confession of Mata Hari, is a tribute to his favorite designer, Alexander McQueen.

Lace, lights, Swarovski crystals, battle armor and yes, Katy Perry as a mermaid, are all part of his CV, but Furne started humbly before dedication and a dash of luck catapulted him onto the international stage.

“During my younger years I was inspired by my mother’s and grandmother’s dresses,” says Furne, who grew up in the Philippines and started sketching at age 10. “My mom and grandmother always have good taste in fashion. There are no particular styles or pieces that inspired me [because] they were so glamorous but generally seeing them wear such pieces inspired me as an aspiring designer, that one day I could also design a dress [that] women will love to wear. They are so proud of me today.” 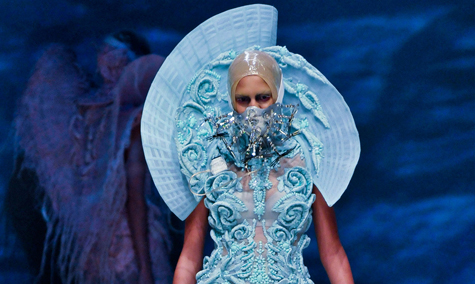 Self-taught, Furne won the Mega Magazine Young Designer of the Philippines Award in 1994. Renowned designer Josie Natori happened to be a judge for the award. Impressed, she offered Furne an apprenticeship in New York.

“Working and being trained by Josie Natori was hard,” says Furne. “Things were different from back home. But for me it’s part of learning and growing. I can say that it’s where my career jumpstarted.”

From his time with the Young Designers in the Philippines to today, Furne’s collections have transformed. He based his first collection on personal feeling and his Asian culture and now he says, he mixes his design knowledge with things that inspire him in places he visits and cultures he’s learned.

This global outlook has benefited the designer immensely, as he creates custom looks for Dubai’s elite, international campaigns for companies like Smirnoff and has been featured on Heidi Klum’s Germany’s Next Top Model for several years.

“I think reality TV shows have given the designers a chance to show the public andÂ viewersÂ their talents and showcaseÂ themselves, since it is the viewers and the public who are the main consumers,” Furne says of Top Model and Project Runway, which Klum also produces. Three Project Runway designers will also present at Launch Fashion Showcase.

“Heidi Klum is a truly remarkable woman,” he says of working with her. “Given the fact that she’s one of the world’s most famous supermodels, she is [still] refreshingly down to earth. She is also warm, supportive and extremely professional. Katy Perry, Jennifer Lopez, Nicki Minaj, Neon Hitch, Nicole Scherzinger and Shakira are all so supportive in my creations. Designing for them is both a great honor and a real pleasure. Not everyone has the privilege to work with celebrities.”

When a client needs an outfit, Furne says he’ll ask if he/she has a theme, ideas or colors in mind. Then he’ll work with his team to come up with a concept and present it before moving on to the next step. The approach has worked well for him since starting Amato Haute Couture 10 years ago.

Because of his fitting place among the stars, Furne recently opened a couture boutique in Los Angeles and has plans for future expansion. For Sacramento fashion lovers, that means not only an unmatched experience at Launch, but also a chance to see the latest Amato creations just hours away.

“Los Angeles is where the heart of fashion is,” Furne says. “Stylists and celebrities are all in Hollywood.”

He adds that he thinks theÂ public hasÂ also embraced his work, and working with famous artists has made him very happy and inspired him to go further with his designs.

“Like any other designers, I want my label worn and known to all women and men.”

Other designers at the Launch Sacramento Fashion Showcase include Michael Costello, Gordana Gehlhausen and Seth Aaron, all of Project Runway, as well as Californian Ashon Sylvester. For tickets, visit http://www.launchsacramento.com/.