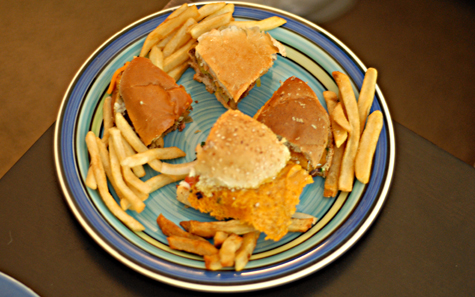 I’ve been waiting weeks for this one, often fighting cravings in fear of burning out on America’s crown jewel of ground beef and its accompanying deep fried golden strands of starch. Yes, friends, I’m talking about the cheeseburger and freedom fries. Say what you will, but few meals beat the comfort and subsequent comatose of a fat greasy burger and crispy fries. And now that I’ve planted a seed in your subconscious cravings, let me now give you the only successful plan of attack: four great burger spots in the greater Downtown area.

Mind you it wouldn’t be fair to try just one, so instead I enlisted a team of Submerge staffers to help make the call and most importantly finish the food. Hunger overcame creativity, and thus was born the glorious challenge dubbed “Burger-Off.”

We tried to make the playing field as even as possible, so we decided to try each restaurant at the most basic level with the cheeseburger/fries combination. With that established, we created a complex rating system that involved tasting and thinking.

First off, the contenders: Located on 816 12th St., and with over 74 years of experience, our first spot is Jim Denny’s, a classic All-American burger joint.

For our second contender, located at 1948 Sutterville Rd. we chose Ford’s Real Hamburger, with an emphasis on the real.

The third contender, nestled at 7918 Fruitridge Rd., is the Squeeze Inn, which boasts over three decades of hamburger excellence.

And last but not least, located at 1630 J St., we have a local downtown favorite: Hamburger Patties.
Four heavyweights, three hungry judges. Let’s get it on.

Jim Denny’s
James Barone: Loved the thin, fast food-style fries—not as plastic-y tasting as the shit you’ll get at McDonald’s. Grilled onions on the burger were a plus, flavorful patty, but the bun was pretty weak.
James Pitner: Strong mustard flavor, quality meat, good cheese and grilled onions. The grilled onions made this burger.
Corey Bloom: The patty and fries were a little thin for my liking, but the flavors are good. A good burger, not a great one.

Ford’s Real Hamburger
James Barone: Biggest patty by far, but not as well seasoned as the other entrants. Tasty onions and fresh-tasting fixings, but the fries were also pretty boring.
James Pitner: This one comes with a cool layer of shredded lettuce and fresh fixings. I think they could have been a little more liberal with the seasoning.
Corey Bloom: I like a homemade patty, and this is definitely one of those. Very big and juicy, great bun and a good secret sauce. I remember them having different fries, which I liked better; but again, not bad.

Squeeze Inn
James Barone: Delicious hamburger patty and toppings plus a sesame seed bun all made for a great sandwich, but the copious melted cheese and cheese flap were a bit much—too salty
and distracting.
James Pitner: This burger is not for the weak hearted. The bun is delicious, the fixings handle their biz and the place is greasy as hell!
Corey Bloom: Great fresh, hand-cut, unfrozen fries. The cheese skirt that draped the burger was a little much for me, but once you get past that the rest is great.

Hamburger Patties
Corey Bloom: A good burger, and the most straightforward of the bunch. The fries were okay as well.
James Barone: Tastiest hamburger patty for sure, though the fries were pretty bland.
James Pitner: The charbroiled taste of this burger set it apart from its competition.

In the end, it was the Squeeze Inn who took it all, winning unanimously in the fries category and tied Hamburger Patties in the meat department. Propelled by great fries, their overall victory was an upset and a surprise to some (mainly me). However, as much as we tried to make it a competition, everyone agreed that all of the burgers were good in their own right and we would undoubtedly eat at each spot again.