Lately nothing sounds better to me on a cold winter day than walking over to a local ramen house and refueling by way of slurpable noodles in a piping hot, deeply flavored broth. For a while, Sacramento had very few places to satisfy this craving; now the demand is growing and high-quality ramen is not so hard to find. One man responsible for bringing high-quality ramen to Sacramento is Sai Wong. Mr. Wong is a restaurateur who lives and breathes ramen, so it made sense for him to open not just one, but two ramen houses in the area. What caught my eye, however, was the fact that they are located right across the street from each other.

I popped into one of the ramen houses to try to set up an interview with Mr. Wong; I thought I would ask someone for a card or a phone number. Knowing he’s a local restaurateur (Akebono, Ryujin Ramen House, Raijin Ramen House), I assumed he was very busy—being a restaurateur and whatnot—and might be hard to track down. Upon entering the bustling Raijin Ramen House I asked the friendly woman behind the counter for Mr. Wong’s contact information; instead of handing me a card or giving me an email address, to my surprise she turned around and said something to the chef who then came over and introduced himself. 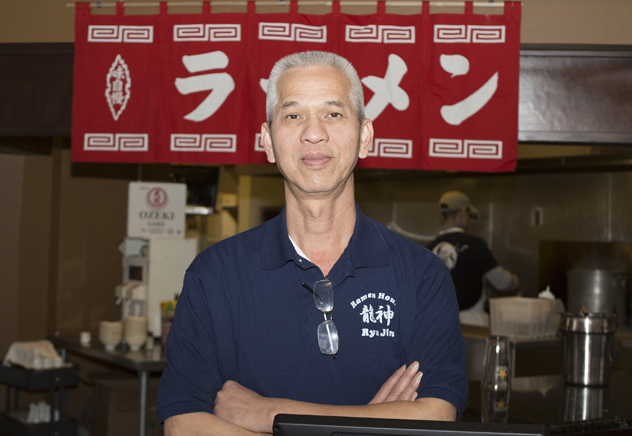 I was surprised to see you behind the counter cooking. Do you work at all of your restaurants?
Yeah, right now I’m working here, but I worked at Ryujin too. It has been open for three years already so they have a good system, but I make sure to go over there and taste every day. I have to make sure it’s good, make sure it’s right.

When you’re hiring someone to cook your recipes what kind of person do you look for?
They have to like cooking and eating ramen. A lot of people come looking for a job, but just for the salary. They have to love the food. If they don’t love it, then they are out.

Can you tell me about your childhood? Where did you grow up?
I was born in Laos, then at 17 or 18 I went to Japan. I lived in Tokyo for about 15 years. When I was there, during my first week somebody took me to eat ramen. At first it was funny to me because when you order ramen on the street they just give you a bowl. No spoon, no chopstick, no table, no chair. [Laughs] For me it was the first time just holding the bowl and I thought, “I cannot eat like this” [laughs]. But that’s how they do it. 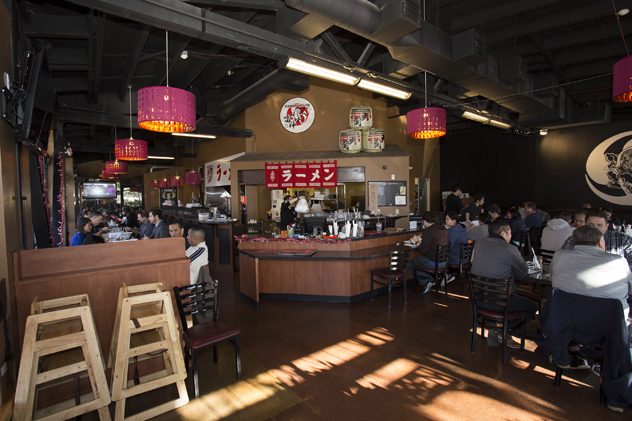 And after having your first bowl of ramen …
It was cold when I got there so eating a bowl of hot ramen made me feel good. From that time on I kept eating ramen. During my time there I ate a lot of ramen, over 400 bowls a year. I love ramen. People in Japan thought I was crazy for eating ramen every day.

I can tell you are very passionate about ramen.
I opened Edokko, my first ramen shop, in Japan in 1985 and I’m still learning about ramen every day! There are always new kinds of ramen in Japan. I have ramen contacts there that tell me about new ramen and send me photos. Every day I look at new photos of ramen and ask questions about the flavors and what’s in it. Then I go to Japan and try it. I have to study all of the time.

So what brought you to America?
My parents moved here a long time ago. When I moved to Japan, they came here. They kept asking me to come here so I came.

And when you came here did you open a ramen house?
I opened a ramen house in 1993 here in Sacramento on Broadway and called it Edokko like in Japan, then I moved it to Greenhaven, then back to Broadway, but at that time not too many people ate ramen. They thought it was Top Ramen or something, but now people know a lot about ramen. 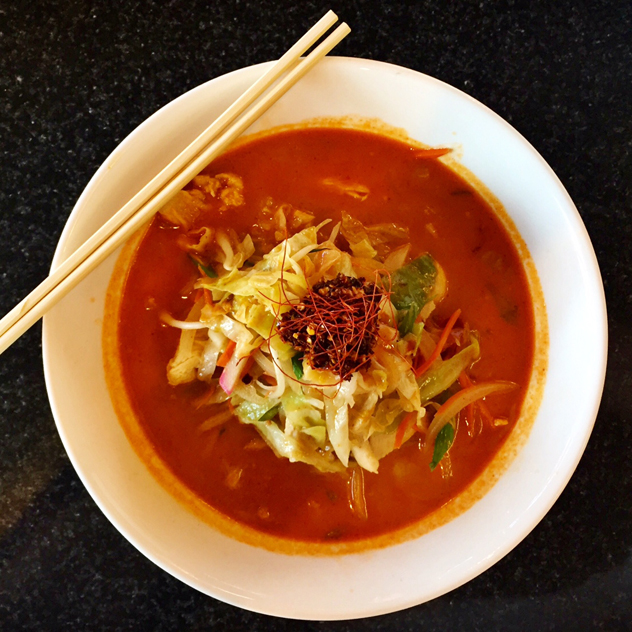 Before this location was Raijin Ramen House it was an Izakaya. What made you decide to move away from the Izakaya style restaurant and open a second ramen house?
I love Izakaya. San Francisco, New York they have many Izakayas but in Sacramento we didn’t have one so I tried to introduce everybody to the Izakaya. It became a problem because a lot of people drank too much and got into trouble, bothered other customers. They even went outside to fight.

Were you hesitant about opening up a new ramen house right across the street from Ryujin?
Yeah a little, but I thought the first one is very busy and a lot of customers can’t get in; if I open one more it will be better for the customers. They can come here, try this ramen and choose which one they like.

I noticed you have many types of ramen on both menus. How do you come up with your recipes?
I have to go eat a lot of ramen. I go to Japan every year, twice a year to eat ramen. I go to four or five ramen houses a day looking for new ramen, new ideas. Right now they have a lot of spicy ramen so I brought that to Raijin. I make the ramen, taste it, make it, taste it, make it, taste it. Then I decide if it’s good enough. A recipe can take 3–6 months. 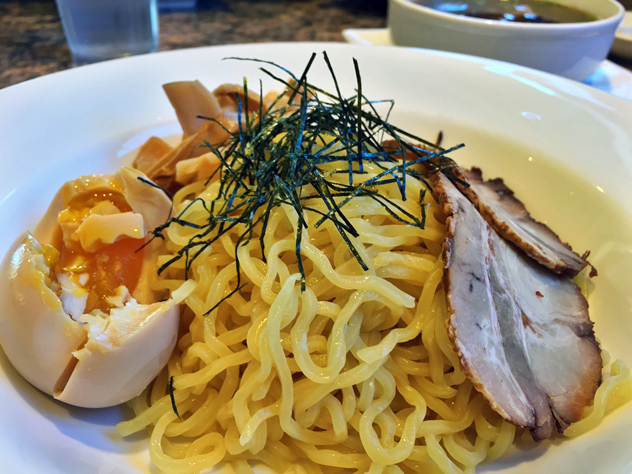 What are some of the differences between the menus at Ryujin and Raijin?
Here at Raijin we have more spicy stuff, more new stuff. The basic broth is almost the same. Our main broth is a pork broth. Some customers asked if we can make a chicken broth, so we made one at Ryujin. If our customers want everything chicken, we’ll make it for them over there.

I noticed a difference in your noodles as well.
Yeah, some are different and some are the same. Here at Raijin I have two kinds of noodles. Over at Ryujin I have one kind. The basic noodle is thinner, but for the spicy ramen here I use a thicker noodle.

After trying so many styles of ramen do you have a favorite?
It would probably be a soy sauce-flavored ramen, a shoyu ramen. The first ramen I ate was a shoyu ramen and I’ve kept it in my mind my whole life [laughs].

So what’s next for you? Do you think you will open another ramen shop?
Well let me just say if I open one more ramen shop it’s going to be different. Completely different.