Traditional Jewish Delicatessen Goes Electric at Solomon’s • It Ain’t Your Grandma’s Deli, Unless Your Grandma Is a Shredder 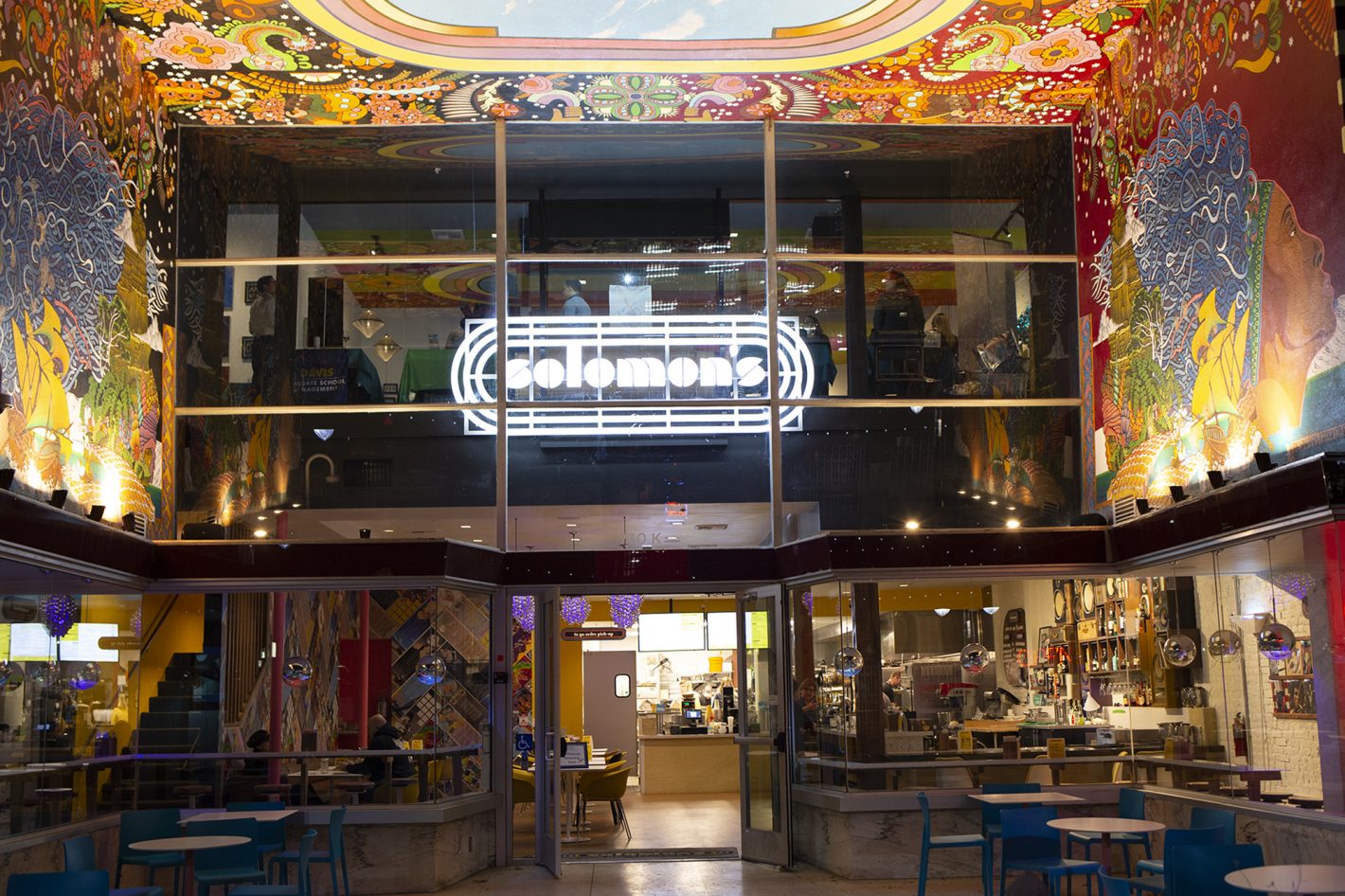 I was 10 years old when my mom brought me to Tower Records with hard-saved allowance to buy my first vinyl: Purple Rain. Little did she know about the lyrics to “Darling Nikki.” The feeling of putting my money on the counter and the guy at the register giving me the smug look like, you’re never gonna be the same, kid. It was a rite of passage.

It’s a similar feeling when you arrive at the doorway of the new Solomon’s Delicatessen on K Street, the site of the sixth original Tower Records location. Before you even walk in, the radiant, super-trippy, symmetric, psychedelic mural is like a gateway announcing your reality is about to change. The art was commissioned by Russ Solomon himself in 1973, founder of the legendary Tower Records chain that started here and became a powerful vehicle for music, movies, books and art all over the world. Originally by Frank Carson and Mitch Aronson, the art was recently restored by Mitch’s daughter Sophie Aronson, and local artists Franceska Gamez and Shaun Burner.

It isn’t just a restaurant that inhabits the space and borrows the style from the famous record shop; Solomon’s is both a tribute to a local figurehead and a continuation of the creative wellspring that made the Tower so skyscraping. It can truly be said that making this deli required “getting the band back together.” Co-owners Sonny Mayugba, Andrea Lepore and Jami Goldstene all had a connection to Solomon, and when they conceptualized this wild reimagining, they reached deep into his creative network to tap many of the original craftsman who contributed to the Tower zeitgeist.

Where most restaurants take a handful of months to roll open the doors, the renovation of this space took years. Lepore is the visionary force in the area who developed Hot Italian and the ambitious design project rejuvenating Del Paso Boulevard. She’s a comprehensive creative, thinking of design that will support culture and public space beyond a single building. Every last detail of Solomon’s underwent painstaking consideration: moving the stairs from one side to the other, the glossy high-tech kitchen, a bitchin’ retro installation of vintage speakers by local upcycle company Boom Case. When you’ve had your noshes and you are ready to ascend into the Russ Room, the signature yellow of the Tower sign lines the stairs to the second floor.

“Pantone 109CDD, I was so glad Russ remembered it!” Lepore laughs about the exact hue of yellow.

But before we go up there, let’s grub. Goldstene brings what she calls her “deep Jew food knowledge” together with Chef Mike Atwater’s contemporary style to blend the rich bounty of Jewish traditional food with the magic of modern Cali slow food. I can see how for some stodgy old-schoolers, Solomon’s offerings might seem a little complicated, but personally, I love that I can get a Reuben with a spanking glass of cab.

“We’re a newish Jewish delicatessen,” says Goldstene. “There are some things you’ll see that are very traditional … We’re reintroducing it to an area that hasn’t had a Jewish deli in quite a number of years.”

Solomon’s does a lot of baking in-house. You can get aromatic bagels and challah delivered daily from Grateful Bread. Ingredients are sourced locally as much as possible, and everything they make comes from inside California.

I sucked down a “Strawberry Fields” like a VIP in the green room: bourbon, strawberry syrup and rhubarb with bitters. It went down a little too easy with the latkes, sour cream and applesauce. 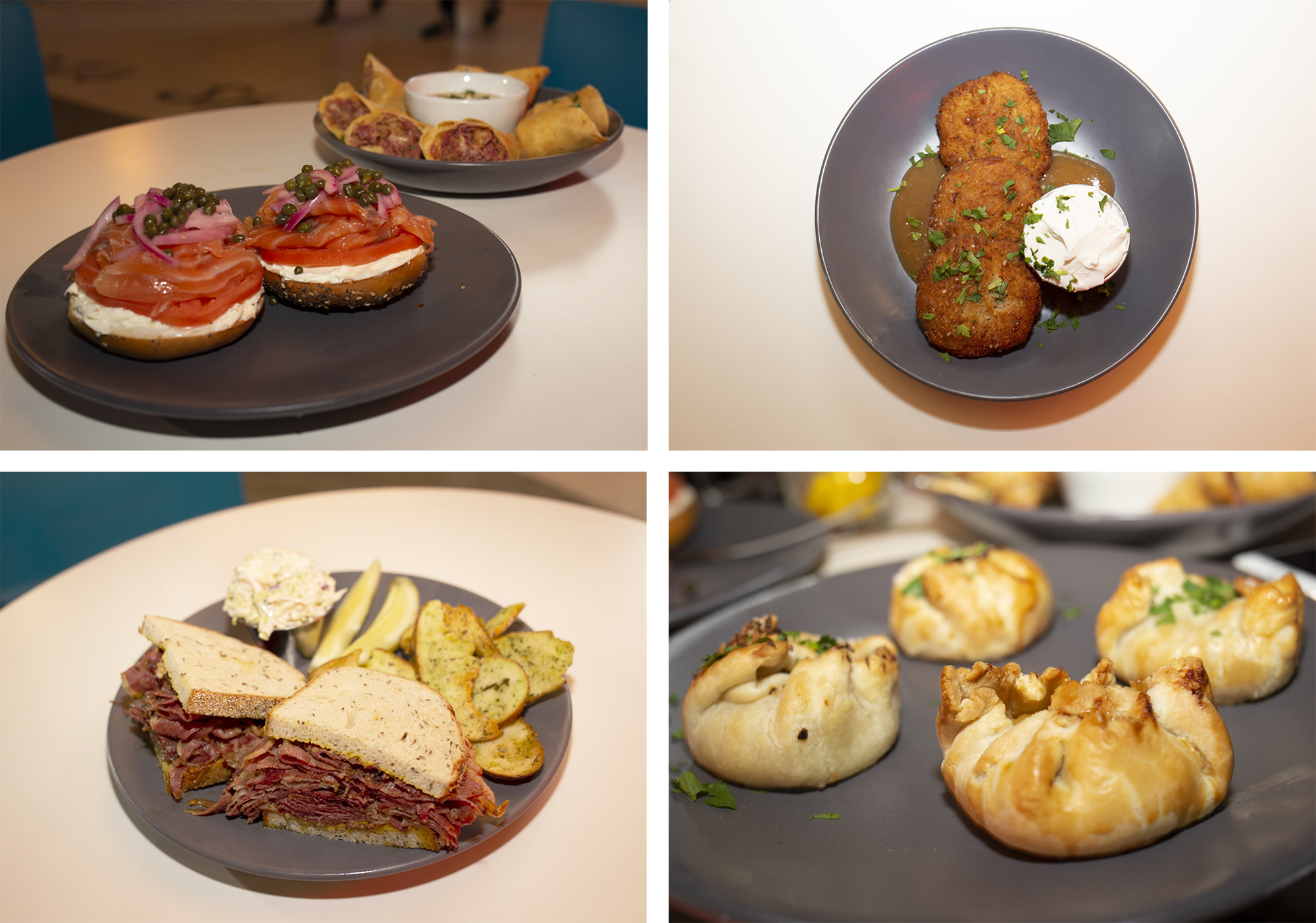 The classic lox and bagel with horseradish cream was stacked so high with wriggling-fresh fish, I had to really crank my jaw around it. Then came the signature pastrami on rye, also excessive to the point of hedonistic with thick-sliced, pink meat and tangy, punchy mustard. The pastrami and corned beef are from a Southern California outfit that also sources Langer’s, an L.A.-based delicatessen that is arguably the best in the nation, Goldstene tells me. You can also get that pastrami in an eggroll if you still need more fusion. Had I to do it all over again, I’d have ordered a Pickletini for this course.

We sat outside and the owners watched us plow through the pastrami (oh man, that pungent carraway of the rye bread!) and a constant string of passersby would spot them and come over to talk about the qualities of their black and white cookies as they compare to that of their favorite deli in Chicago, or just to say thanks for doing this.

To counter the rich-and-heavy nature of Jewish comfort food, they have plenty of healthy Cali-style stuff whipped into their recipes, and Solomon’s even participated in the 30-day Vegan Challenge and was praised widely for its And the Beet Goes On sandwich and its ‘Shrooms Rubin.

And still Chef Mike kept bringing more food, this time a plate of assorted, house-made knishes. Apparently, Darrell Corti, of another old-world Sacramento institution Corti Bros., said Solomon’s knishes were the best he’d ever had. This was so obviously a feather in everyone’s cap.

Truthfully, I haven’t had a ton of knish in my life, but this dumpling of savory fluffy potato wrapped around portobello totally lives up to my platonic ideal of knish.

The Cheesecake with Matzo crust is not as lively as your usual graham cracker or saltine crust—a ballad versus an anthem, if you will. I paired it with a “Man Oh Manischewitz,” which is like a blackberry Kir Royale. I also recommend boxing half that big slab of cake so you can finish it off at midnight in your underwear standing in front of the fridge. Not that I did that or anything.

But dessert won’t be the end of your night at Solomon’s; the elevator ride is a minute-long visual tour through popular music in the last half of the 20th Century, spackled from floor to ceiling with iconic faces on famous magazine covers, and of course, disability access. The second floor is the Russ Room, part art gallery and part live performance space. Exhibits will be curated by John Soldano of the Toy Room Gallery, famed as a purveyor of brash pop art, street art and rock posters.

Again, the wall of glass works its full magic, allowing upstairs guests to see out onto K, and pedestrians on the sidewalk to look up and see what’s happening on stage. Longtime Sacramento promoter Brian McKenna will be doing the booking, but the team all plan to channel talent onto the stage. Mayugba says the venue will be a mixed-use space for private events, a smorgasbord of music, even some all-ages shows. It’s a nice counterpoint to the arena down the street, an intimate spot that will foster local performers. In fact, many Solomon’s employees play in bands. Solomon’s really wants to cultivate a scene on this strip of K where the youth feel welcome in the same way that Russ made the Tower. So you can get a bagel for 2 bucks, peruse the vinyl (yes, they do sell some vinyl supplied by Phono Select), check out a band or a reading and keep strolling. 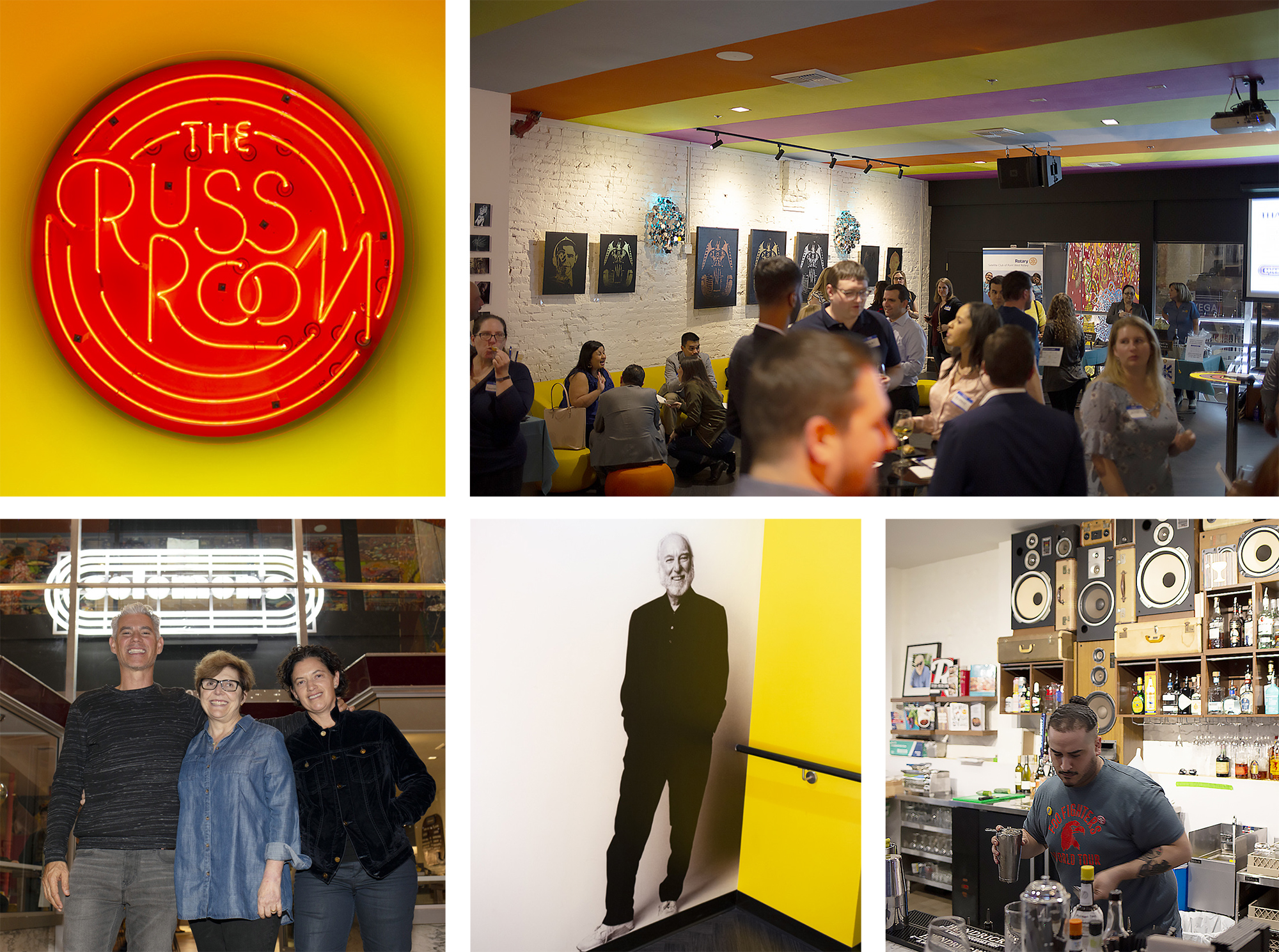 The Russ Room expects its live music license any day now, but in the meantime, you can get bottomless mimosas on Sundays and movie and music Trivia Night on Tuesdays with rotating local celebs doing the hosting.

The area really has changed and it’s clear that the community is stoked about it. The light rail, Jump Bikes and added security make the area more accessible to tourists and all kinds of locals.

“K Street is its own animal,” says Mayugba, whose other culinary successes include Tiger and The Red Rabbit. “We have to be a multi-dimensional offering to pull people in and make it a destination.”

It’s certainly a grand mission and a balancing act: to keep the gold of the past spinning on the turntable while incubating something new. But this crew is both business savvy and tuned into Sacramento’s restaurant, music and art culture. I think they are hoping not just to sell something, but to build something by inviting the community to participate. That takes time. There’s a Yiddish word for what they are doing: Shtrebn. It means to strive.

While Russ Solomon sadly never saw the final, dramatic reveal, he did give the project his blessing before he peaced out. He went like a boss sipping whiskey on his couch at the sweet-ass age of 92. But I think he’s up there on the paisley plane looking down, raising a glass, stoked that his friends are carrying on where he left off.