A Slice Above the Competition • Sacramento, Prepare to get Toasted 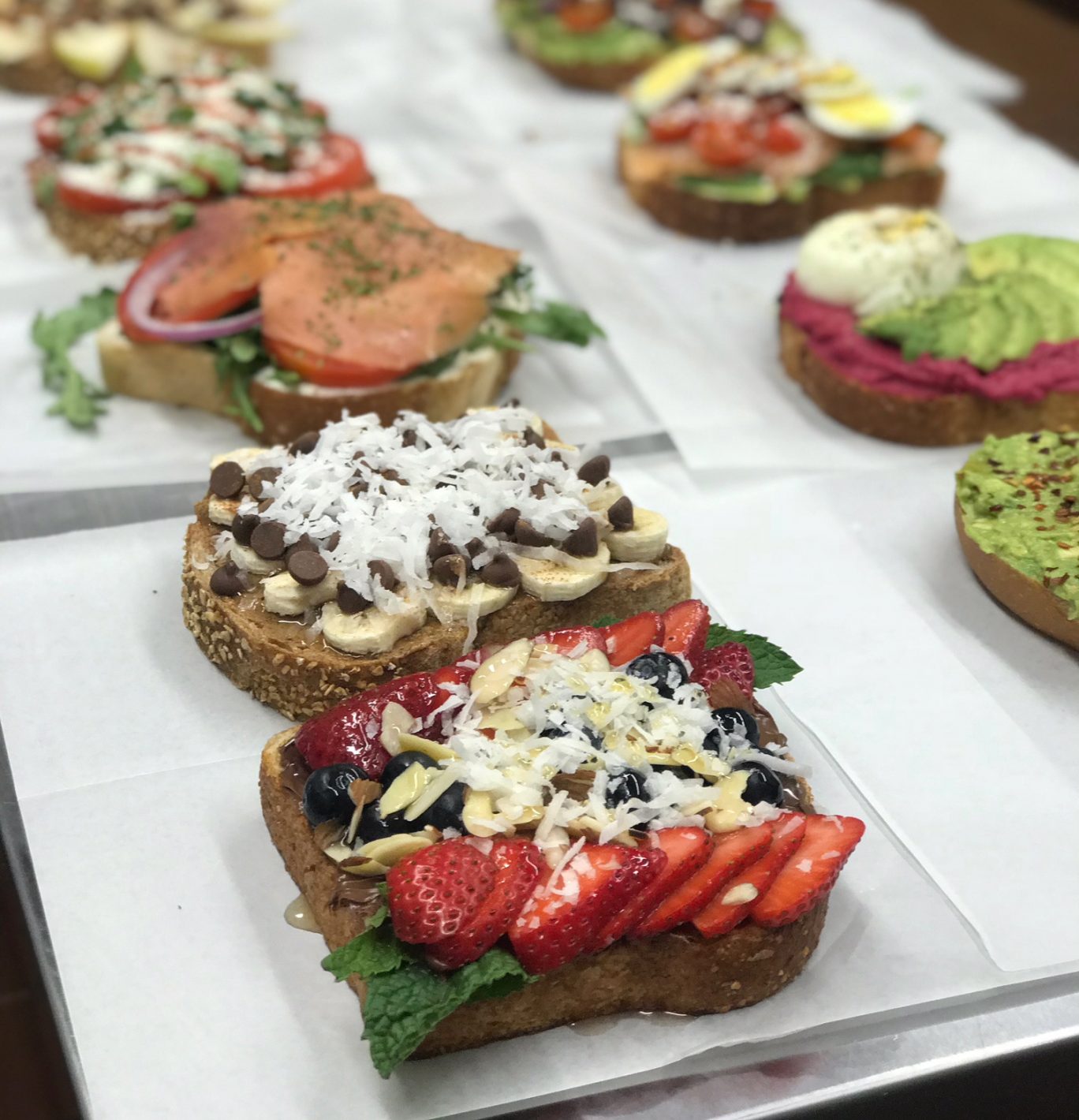 Photo above by Nubia Murillo

Nestled in a tree-covered neighborhood in downtown Sacramento, across the street from the Curry Club Indian restaurant, you’ll find Toasted, a new grab-and-go breakfast and lunch option that state workers and neighborhood residents have been flocking to. This new kid on the block offers … well, toast of course. However, not just any toast—thick slabs of toast.

“Our bread is locally sourced from Bella Bru Bakery,” said Toasted’s owner Nubia Murillo. “We use thick cut bread that’s delivered fresh daily, so you get your bang for your buck. I wanted something thick and wholesome; if you’re paying $7 for toast, you’re going to get your money’s worth. We also really load them up with toppings.”

Though Toasted is new to the neighborhood, Murillo isn’t. She has owned Toasted’s next door neighbor Cap City Squeeze Juice Bar for four years. Both businesses are identical in size and share a wall that’s begging to be knocked down so toast and juice can be passed from side to side freely. Unfortunately, Murillo is unable to alter the building, but she has been creative when it comes to the space she has. 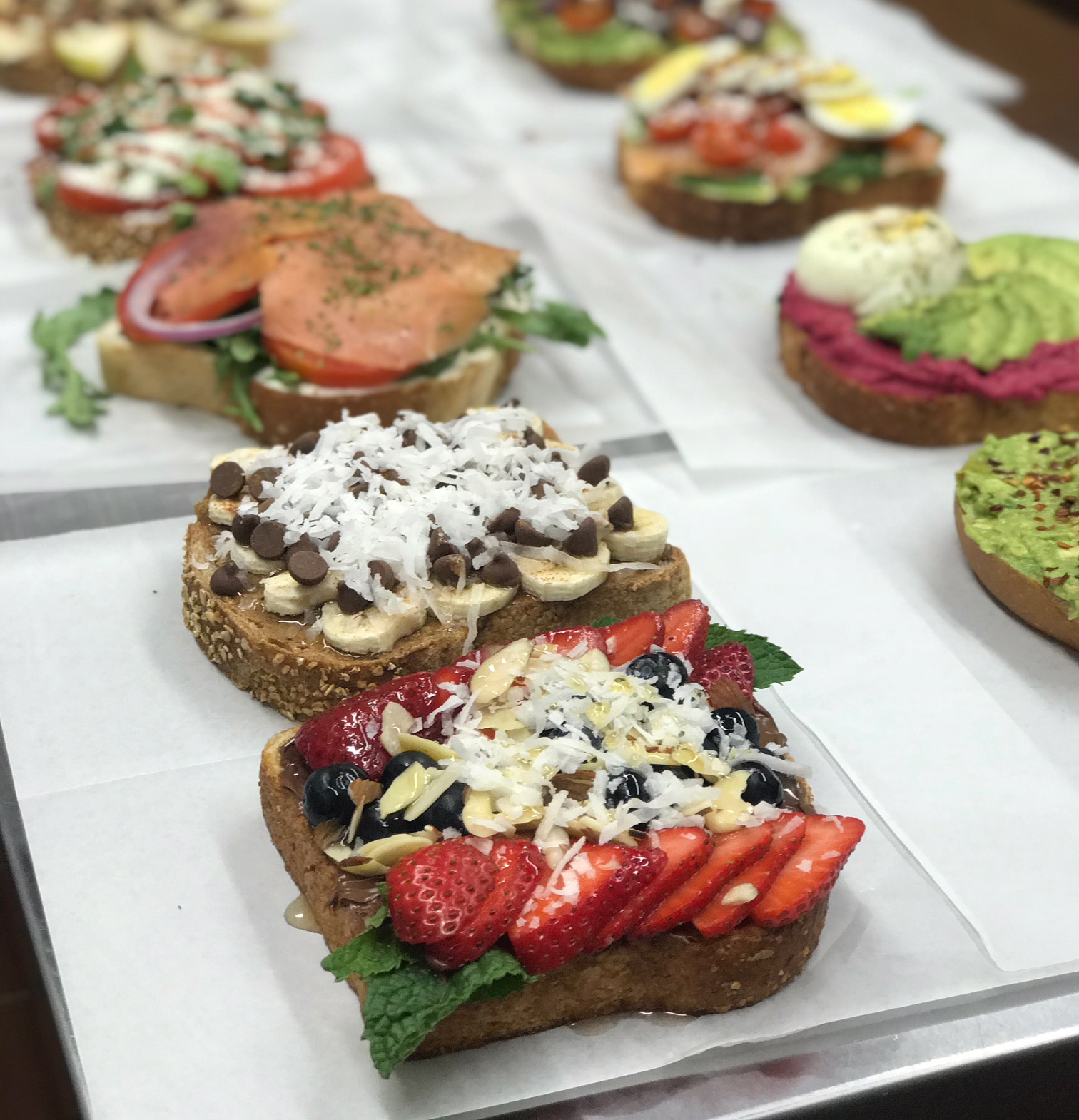 “The spaces are small. They’re about 220 square feet,” Murillo continued. “I kind of designed both locations the same way as far as how the kitchen functions.”

This is one of the reasons Murillo’s businesses are so complementary. While ordering my variety pack of toast, I could hear the sounds of fresh fruits and vegetables being juiced. I’m sure those who are ordering juice were being equally enticed by the smell of freshly toasted bread being slathered with hazelnut spread and honey. There was no way I was leaving without experiencing both. 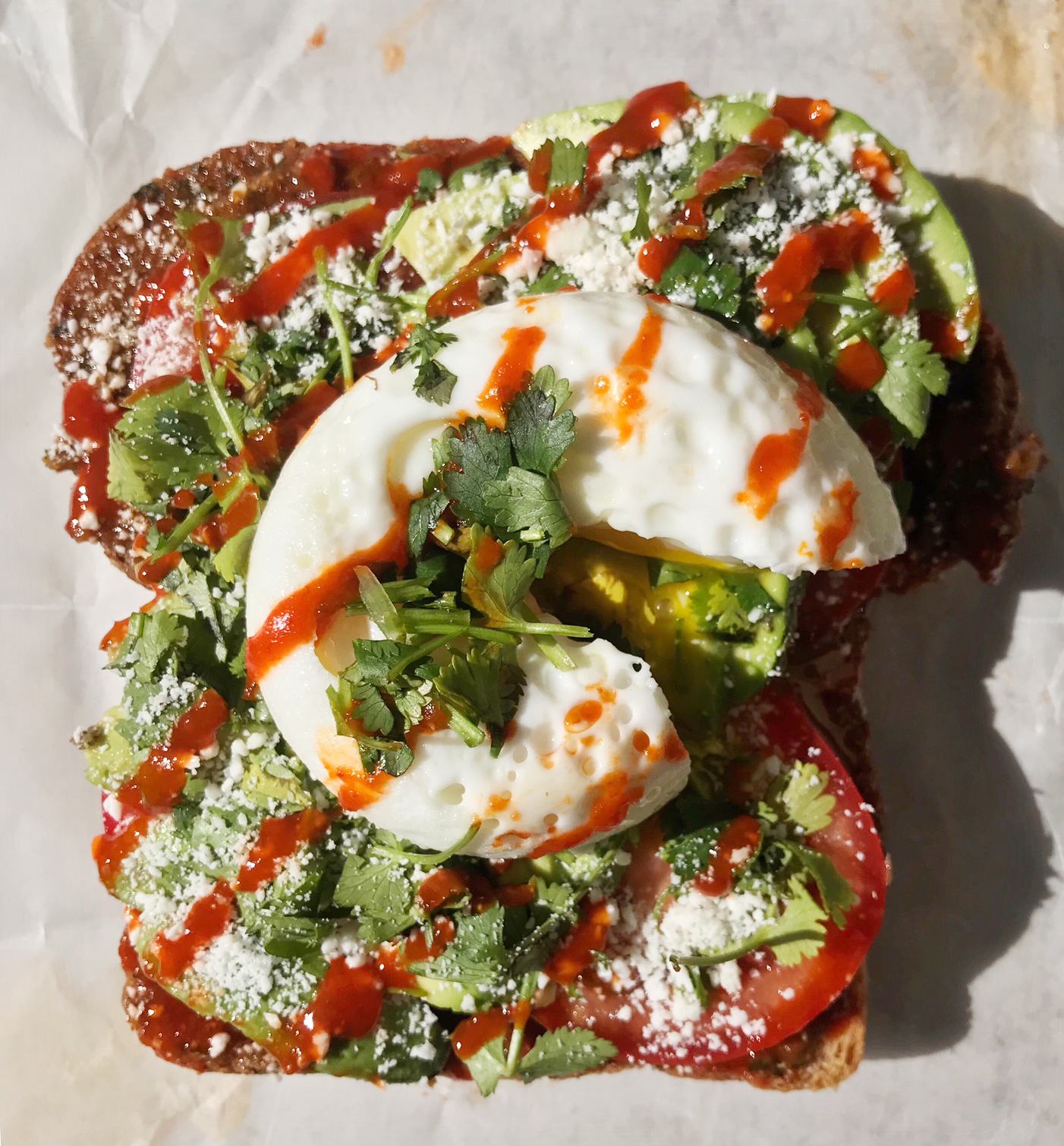 I ordered three different toasts at Toasted and found the portions to be more than enough for three separate satisfying meals. First up was the Southwest Chipotle Toast, which featured sliced avocado, chipotle pesto, sliced tomatoes, cilantro, cotija cheese and sriracha sauce on top of a thick slice of whole grain toast. Consistent with the other two choices I made, this toast was bordering on the size of an open-faced sandwich, which was more than generous at the $7 price point. Though, inspired by some of the photos I saw on Instagram earlier in the day, I opted to add a poached egg to this order for only a buck and it did not disappoint. With one gentle slice, I slowly cut into the egg, and out poured the saucy yolk, which cascaded over the cotija cheese and down the avocado slices with purpose. It was a thing of beauty.

After reluctantly pacing myself and not devouring all of the Southwest Chipotle Toast, I turned my attention to the Salmon Lox Toast. With the classic combination of lox and cream cheese, this toast comes with the promise of traditional flavors, but at $9, it also comes with expectations. In place of a bagel sits a generous slice of French bread topped with cream cheese, arugula, sliced tomato, purple onion, sea salt and pepper. As soon as you lay eyes on this modern interpretation of an East Coast favorite, you instantly know you made the right choice. The salmon was piled on liberally, which I found comforting, and the peppery arugula added that bite to balance out the cream cheese.

This could easily become my Saturday morning go-to breakfast. 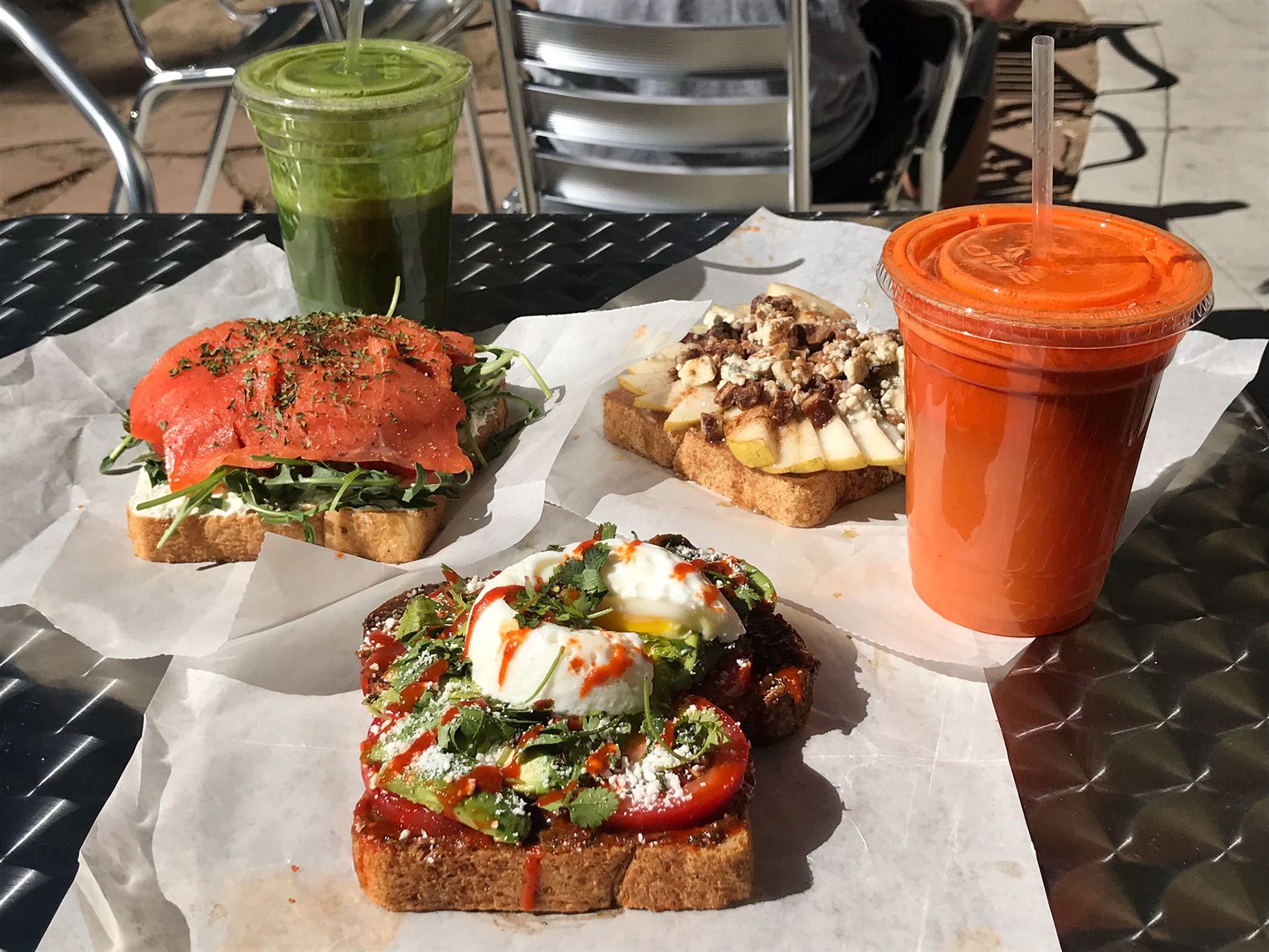 I know the focus of this piece is on toast, but I could not resist a fresh juice from Cap City Squeeze Juice Bar, which I consider the older sibling of Toasted. After all, before Toasted was a twinkle in Murillo’s eye, she was making juice at Cap City Squeeze. And honestly, I can’t imagine going to one and not the other after I discovered the Volcano. This simple but addictive drink is packed with fresh carrots, orange juice, ginger and cayenne pepper (ask for a fresh squeezed lemon to be added for that extra zip).

After two savory toasts, I decided to switch it up with something on the sweeter side. There were so many great options, like the Berry Not-tella Toast (hazelnut spread, blueberries, strawberries, sliced almonds, honey and coconut flakes on honey wheat toast) and the Chunky Monkey Toast (peanut butter, bananas, chocolate chips, coconut flakes, honey and cinnamon on honey wheat toast), but I decided on the Pear-fect Date Toast. This sweet and savory treat was a slice of whole grain toast topped with almond butter, sliced pear, chopped dates, gorgonzola cheese, honey and cinnamon. I was surprised how well all of the ingredients worked together. The cinnamon played off the almond butter and the gorgonzola complemented the pear and dates. Another winner from Toasted!

From their seasonal menu that features three savory and three sweet signature toasts, to the build-your-own menu, everything at Toasted is customizable, so don’t be scared to get a little wild with your order. From the presentation, to the service, to the generous portions, Toasted exceeded my expectations and I cannot wait to go back. There are a few tables in front of Toasted and Cap City Squeeze where you can enjoy your meal, but I would suggest getting it to-go and heading over to the State Capitol Park, which is less than a five-minute walk away. 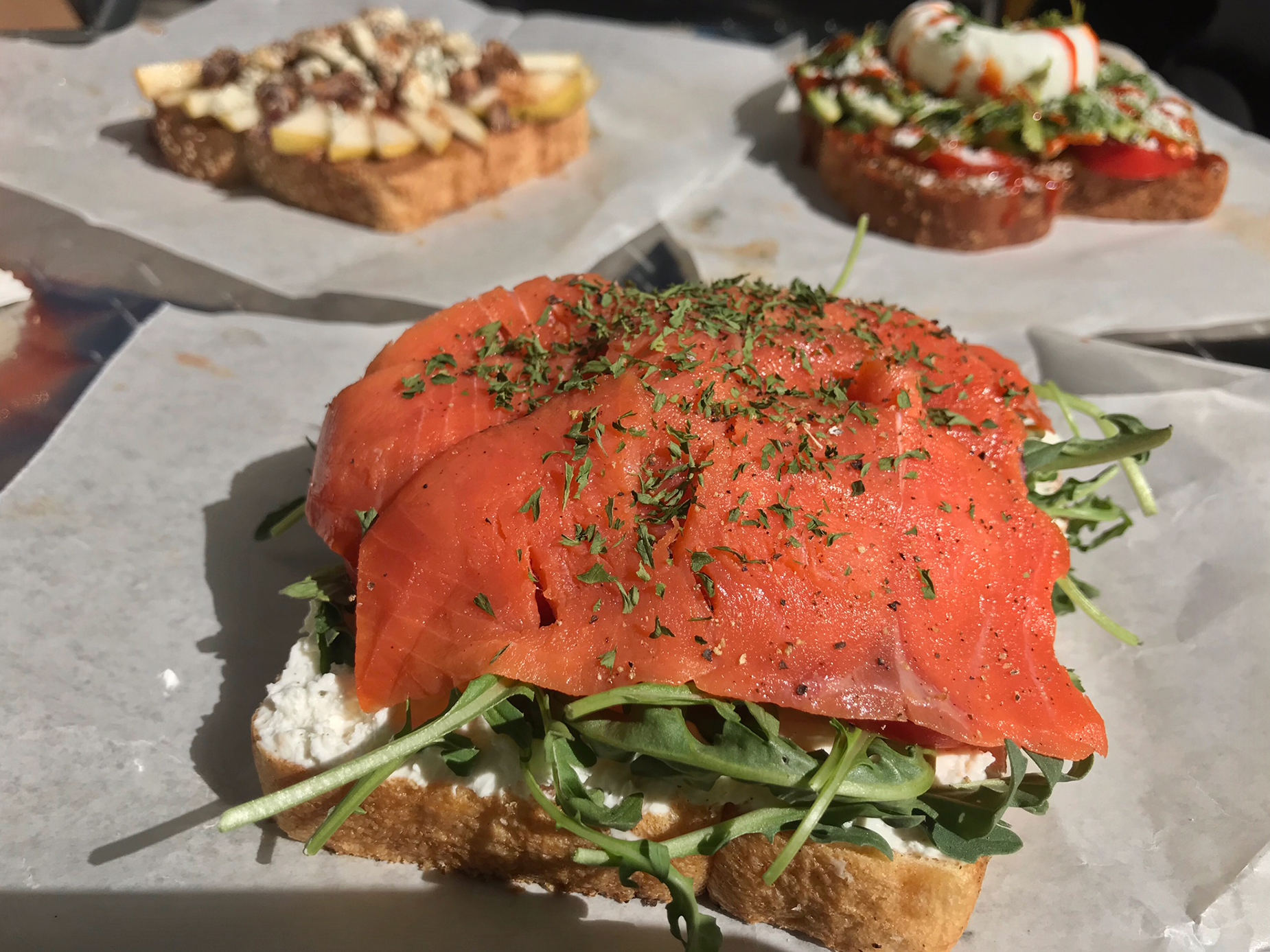