For the Love of Meat: V. Miller Meats Brings Farm-to-Fork to the Butcher Case 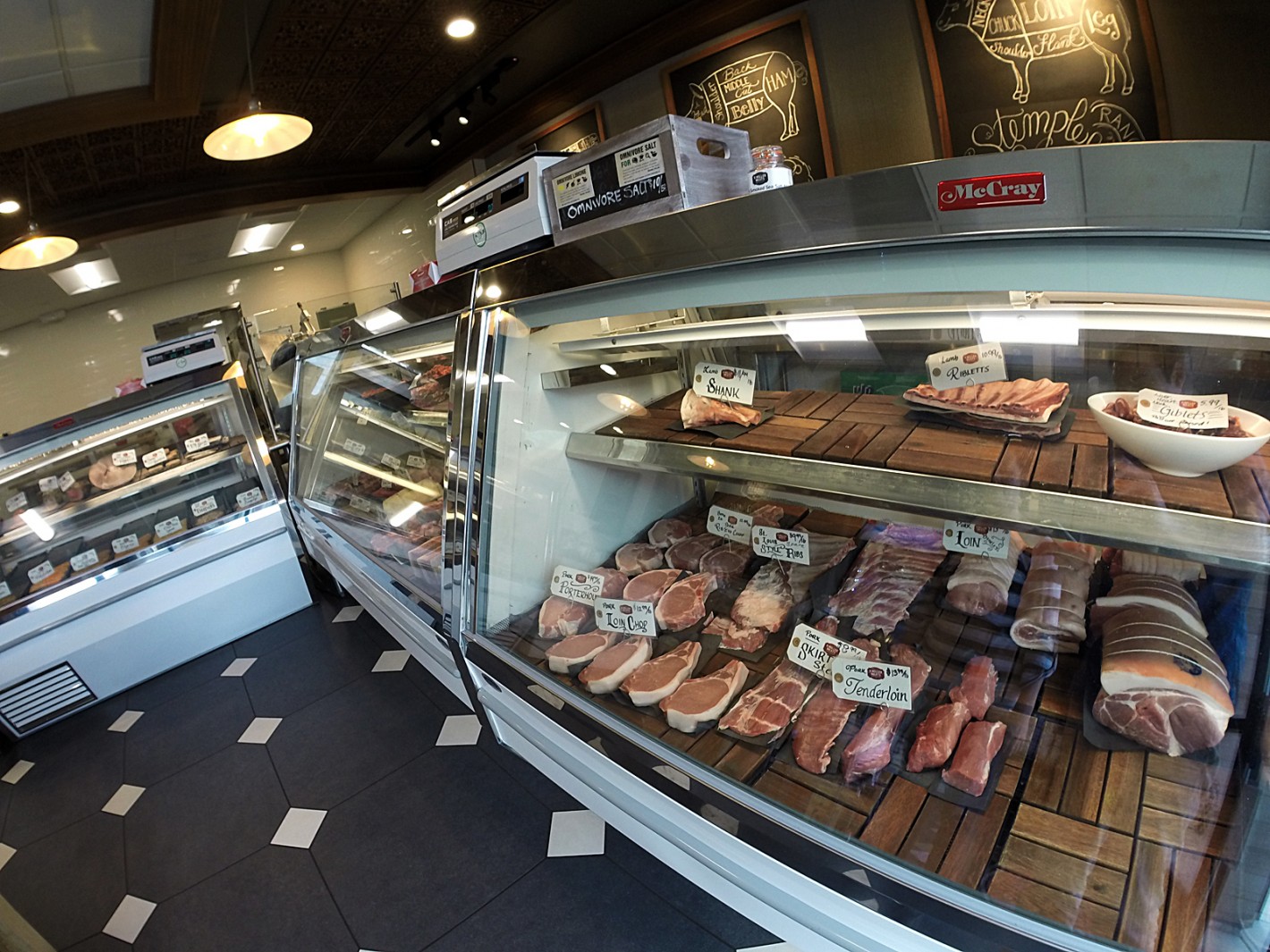 On Amtrak one very early morning from Sacramento to the Bay Area, the train rolled by pastures dotted with grazing cattle along Interstate 80 in Yolo County, and for the first time I wondered if the animal I’d eaten that week had also ruminated in these hills.

After visiting Eric Veldman Miller and his whole-animal butchery in East Sacramento, it’s a thought I’ll have more often before biting into a piece of meat.

V. Miller Meats opened last November and has quietly—but overwhelmingly—taken over kitchens of even the most novice of neighborhood cooks. The shop focuses on home cooking, not offering catering or large restaurant orders because of the limited quantity. For now, Miller orders one full steer a week (but is going up to two for the summer), along with four pigs, two lambs and one flock of chickens.

Miller, a longtime local chef and former Le Cordon Bleu chef instructor, has always subscribed to Sacramento’s farm-to-fork mantra but didn’t really see the same attention given to meat as he saw being given to vegetables.

“People ask, ‘When was that carrot picked? Where was it picked? Is it a heritage breed carrot?’ But, for me, that’s not the most memorable part of a meal,” Miller says. “I thought, we can do this, too. Tie meat into farm-to-fork. So I started meeting other butchers from around the country and it’s working in places that aren’t even as ag-central as Sacramento.”

Miller chose just a few farms from which to purchase whole carcasses, making sure the farms were small, humane, located within 100 miles of Sacramento and raised heritage breeds that are grass-fed and grass-finished.

For now, V. Miller is the only butchery of its kind in Sacramento, and Miller says he isn’t trying to compete with anyone. He even compares his shop more with restaurants than he does grocers.

“The main difference between a restaurant and a butcher: How often does someone go into a restaurant and ask what’s in the sausage?” says Miller, who, along with his three-person staff, makes sausage, hot dogs, bone broth, and several other products to ensure the whole animal is used in-house and never frozen. And he’ll tell you exactly how he did it. He might even show you, as he did with regular customer Keith Bisharat, a longtime River Park resident.

On this morning, Bisharat came in just as the shop opened to pick up items for dinner and says he hasn’t found anything comparable in taste, or anyone who can talk about the cuts and process as it’s happening.

“The chicken reminds me of the chicken I ate when I was a kid,” he says, noting he’s told all of his friends and family about V. Miller. “One of the challenges they’re going to have is that people are used to the taste from big names like Foster Farms and Tyson.”

V. Miller’s head butcher is Cindy Marlene Garcia, a 25-year-old UC Davis grad who started in the veterinary program and ended up loving her meat lab courses so much that she switched careers.

“We aren’t reinventing the wheel, we are simply reconnecting everyone to where food comes from,” Garcia says. “I like thinking we are working toward a future where people know that their food lived a natural and healthy life.”

Garcia remembers how proud she was the first time she brought home a steak after slaughtering and processing at the UC Davis Meat Lab. She originally signed up for the 10-week course for anatomy practice as a pre-vet student, but couldn’t get enough.

“The feeling was incredible—I told my parents all about how it was raised and how it came to their plate,” she says. “The simple feeling of bringing home meat for my family is primitive but so fulfilling. I have stayed with the profession because I love talking about meat with people and love helping people understand the anatomy and physiology of the animal and why certain cuts require different techniques to cook them. I also really enjoy explaining why the care and treatment of the animal is so critical in achieving the optimal flavor.”

Garcia adds that in East Sacramento’s tight-knit community, she and Miller have formed a lot of bonds with people because they now see them every week. She admits to even having ruined people’s meals because her instructions weren’t clear enough or the execution went awry, but she works together with her customers to try again, noting some cuts are out of people’s comfort level, but she wants to push the boundaries to use the entire animal.

Miller adds that a lot of the fun, and also some aggravation, comes when trying to determine what to do with all the animal parts.

“This weekend we had 13 different types of sausages going,” he says. “Even our hot dogs are Stemple Creek Ranch. It took a while to make a really good hot dog but we’ve done it. We always have two to three new projects going as test batches.”

The shop also offers cooked rotisserie chickens for $18 on Tuesdays and boxed meals for two, complete with sides and ready to eat, for $25 on Thursdays.

Potential customers may have preconceived notions that the shop’s prices are out of range given the type of product, but in fact, Miller says, he’s kept prices comparable to the area, and less than full-priced organic meats at Whole Foods.

“This sounds counterintuitive, but I would prefer people buy less meat,” he says. “A big part of your plate should be vegetables, and that’s also more affordable. But we are stuck on this idea that if you are throwing a party, everybody needs a ribeye. I’d say, just get a roast that you can cut into slices and you’ll still have leftovers.”

Miller also hired chef and former instructor Dave Nelson to assist with the shop and cooking, and Matt Davis to help with cleaning. Now, all four can handle different levels of the operation as business picks up, and Miller is looking for a second experienced butcher.

“People think, as we all here did, that we’ll just become butchers, no problem,” he says. “But you’re always cold, you smell like smoke and meat, you’re cutting things all day, and it’s physically very taxing.”

But Miller also tries to have the same mentality he did as a chef—if the chef is having fun, everyone else in the kitchen will, too. If a team member has an idea, they’ll try it out. Some of the quirkier ones have included tongue pastrami, rump roast jerky and ghost pepper hot links.

“You walk in the back door, welcome to nirvana,” he says, and smiles. In the background, Nelson has just skinned a cow tongue and is about to marinate it.

V. Miller Meats is located at 4801 Folsom Boulevard and open Tuesday through Sunday. Find out more at Vmillermeats.com.