Balanced Approach to the American Dream

The English brewed the India pale ale so that it could withstand a sea voyage to South Asia, taking into consideration choppy waters and uncontrolled temperature to create a beer still drinkable.

Brewers today make the English pale ale with these standards in mind, the result being a mellower, more balanced drink than the hoppier American version of the IPA. Head brewers David Mathis and Andy Armstrong, owners of the American River Brewing Company (ARBC) went the traditional English route with their Sunrise IPA, one of their flagship beers at the fledgling brewery out of Rancho Cordova.

“[Back then] it was supposed to be just hoppy enough and alcoholic enough to get to Bombay without bacteria forming in it,” says Mathis, leaning near four taps fastened behind a bar in the ARBC tasting room on Trade Center Drive. “We also use French oak to give the impression that it’s been sitting in a barrel for nine months.”

Though it’s 6.8 percent alcohol by volume (ABV), Sunrise is a sweeter, easier drink than its American younger brother. The floral hop bitterness equally matches the creamy malt middle, and the finish is smooth and clean.

“A beer should have a front, a middle and a back in the palate,” says Mathis, a 15-year veteran brewer, same as Armstrong. “A lot of beers I’ve had recently get rid of that middle. I want our end users to get the full pleasure out of drinking our beer.”

So far, ARBC has two other staple beers–Coloma Brown and Golden Ale–and a limited strong IPA, SSB 120, with plans to add a red ale as its fourth staple this week. 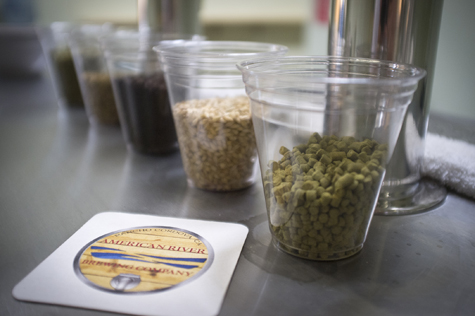 Mathis and Armstrong decided to work together on the brewery venture because they have similar tastes in beer, similar ideas on what beer should be and its future. Their compatibility and balance shows through in their creations. The Coloma Brown, named after the first gold discovery site in California, is a big beer, but at 5.5 percent ABV, not overly alcoholic. It’s like a rich chocolate malt, yet has a smooth, slightly hopped finish.

The Golden Ale is 5 percent ABV, the every-beer-drinker’s ale. It’s light, crisp and can be picked at carefully to discover the yeast and malt flavors. Just don’t drink it after having American River’s other beers, especially the SSB, or it might be hard to hit at subtleties. The SSB is a competitor for the hardiest of California IPAs, but its uniqueness is in its hops. Mathis and Armstrong stayed away from the more common American hops like Cascade and went with varieties that are comparable to European styles.

“Why would we copy what someone else was doing?” Mathis starts, “We want to find our own distinct flavor.” 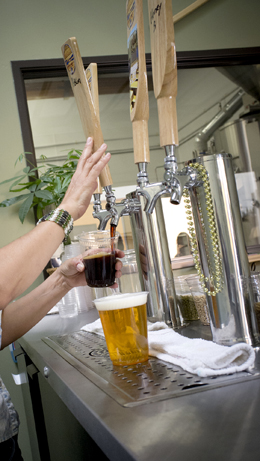 More than 15 years ago, Mathis brewed at home and loved it so much he worked for free at his local brewery until Pyramid Brewery, and later BJ’s Brewhouse, hired him. He admits to almost opening his own brewery back then, but then looks at his 15-year-old business plan and realizes it’s useless compared to what he can do now.

Armstrong and Mathis met at BJ’s, honing their craft and learning the business before deciding to see their ambitious dreams of owning a brewery come to fruition this January.

“BJ’s is good at what they do, especially with their restaurants, but they moved away from their onsite breweries,” Mathis says on why he left the corporate world. “Brewing beer is in our blood, it’s what we’re meant to do.”

Armstrong adds that he learned much of his craft at BJ’s, as well as the smaller brewery Beerman’s and U.S. sake brewer Gekkeikan.

“It was like going to beer school for nine years,” he says of BJ’s.

But he and Mathis wanted to branch out with their own creativity.

The two have a symbiotic relationship. Mathis’ marketing education is apparent, and he’s optimizing on a “grain to glass” approach to business where he and Armstrong create the recipes, choose the ingredients, do the cleaning and meet the “end user” to ensure the best possible experience.

“Sitting down and talking to guests–that’s what I’ve been doing by going to events, festivals, restaurants, bars, educating the sales staff, engaging guests about beer one person at a time,” he says.

Mathis knew Armstrong possessed the right skills and attention to detail when he chose him as his right-hand man to run the actual facility.

Timing helps too. Mathis says what Sacramento area is seeing now is a resurgence after many breweries shut down four years ago, creating a void.

“Sacramento is one of the ripest craft brewery destinations in the nation,” he says, confident the city will join Portland, Seattle, Denver and others as a microbrewery hotspot.

ARBC Tasting Room Manager Lisa Agoitia came on board not long after the brewery opened. She is known in the local beer community, has judged past beer competitions and is studying for the Beer Judge Certification Program exam. 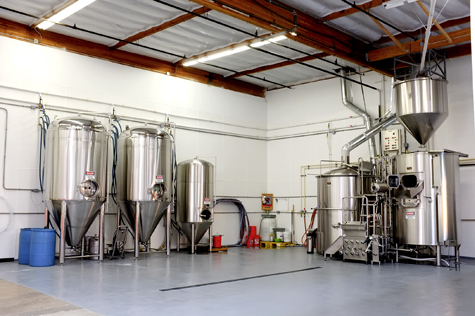 “I’ve known these guys for years and Andy is one of the most creative brewers I know,” she says. She and Armstrong are working together on an upcoming Incinerator Pale Ale, a blend of the brewery’s current IPA with hot peppers and jerk spices, Armstrong says.

Getting the small team started on a beer topic like this is simple when visiting the tasting room, where the three like to spend a few hours getting to know customers and talking about what’s to come.

“You don’t throw in the full pepper because you get the flavor from the skin,” says Mathis, sitting relaxed behind a barrel that’s been transformed to a tall table. “What we’re doing is figuring out how to extract only the heat… but that’s proprietary,” he laughs, refusing to give out his trade secrets.

Along with the upcoming spiced blend, Armstrong is experimenting with honey, chamomile and rosemary in future specialty beers, as well as trying barrel aging. He and Mathis filled three wine barrels with their beer to see what they can produce in limited quantity over the next year.

There is still much more room to grow. American River sits in a 6,500-square-foot industrial facility that could potentially put out 10,000 barrels per year if Mathis adds more equipment. With the current barrels, the company is capable of approximately 1,000 barrels this year, but Mathis says they’re going to take it slow.

“The market demands,” he says. “We’re getting good feedback but my focus is don’t grow so rapidly that we lose quality control or lose the connection with our end user.”

However, the long-term goal, he adds, is to make ARBC a major player like Lagunitas or Drake’s Brewing. Armstrong says he already has a few things in mind, including bottling by the end of summer and introducing new yeast strains.

They’re in it for the long haul with Rancho Cordova as headquarters. Mathis says the city council warmly welcomed the small business and is excited about ARBC’s future prospects as much as the company.

“We’re next to the highway, we have a big parking lot for trucks to turn around and the corridor connects us to the entire country,” he says.

For more information, check out American River Brewing Company on Facebook or stop by the tasting room midweek at 11151 Trade Center Drive, Suite 104, in Rancho Cordova.