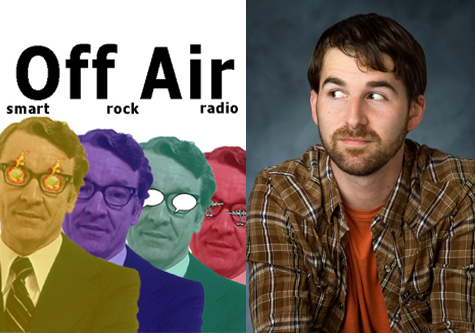 Capital Public Radio’s Nick Brunner listens to a lot of music. As the host of Off Air: Smart Rock Radio, a 1-year-old cutting-edge, indie-rock show available weekly online, he is forced to sift through tons of submissions in order to cut through the BS and create play lists that he thinks his listeners will enjoy and appreciate. “It’s a great problem to have,” Brunner says of the plethora of material he has to choose from each week. “I try really hard to keep the public radio listener in mind. When I was originally pitching the idea to do Off Air to Capital Public Radio, I said, ‘Look, what we’re doing now is great but what I’d like to try and do for us is to get public radio in the minds of twenty-somethings and early thirty-somethings, so that when they’re done with college and they’ve settled down into the community they look back at public radio and say something like, ‘Oh yes, I listened to public radio a lot and it was a big part of my life.'”

If you listen to Capital Public Radio at all, even if you haven’t heard Brunner’s show, chances are you’ve heard his voice doing mid-day transitional material, underwriting messages, weather updates, show previews and more. He’s got the sort of voice and personality that are perfect for radio, a match made it heaven it seems; but it wasn’t something he always thought he’d be doing.

“I wanted to be an actor as a kid,” says Brunner. “I went to Illinois State University and my major eventually became communication, but it started off as musical theater. I swapped to communication to pursue radio after I found out I didn’t like anybody in the theater department.”

It was the discovery of National Public Radio during these college years that turned him onto the wonders of public radio. “I didn’t even know what NPR was until I got to college,” remembers Brunner. “They played cool music, there were no commercials and they talked about interesting things at length. So, I was like, ‘I want to make this my job forever.'”

And so he set out to do just that, applying to public radio stations all over the country, including Sacramento’s very own Capital Public Radio. “After a while I started a job-a-week campaign, where I was just applying for a job every week,” remembers Brunner. “Capital Public Radio was the third establishment that I applied to and they picked up on me and said, ‘Hey, let’s talk.'” That was about two and a half years ago. Now, in such a short period of time, Brunner and his show have become a major part of the Sacramento indie music scene, continuously shining a light on artists performing in our region and offering a place for them to play in-studio. The following interview between Submerge and Brunner took place recently in a popular Mexican restaurant near Capital Public Radio’s studio over a very informal lunch.

You have a perfect personality for hosting. The voice, the vibes, the humor and wit—who are your main influences?
I’m an unapologetic Ira Glass fan. I really like him. He’s one of the smartest guys in broadcasting. He certainly is one of the harder working and most dedicated voices out there, and he’s very honest and I really like that about public radio. You don’t hear a lot of false, exaggerated characterization of DJs and stuff. I also like Steve Inskeep, you know, in terms of public radio personalities I think he’s terrific. Also Kai Ryssdal from Marketplace. I never thought finances could be cool. I never thought half an hour of business news could be so entertaining and informative. They just have one of the smartest shows. So I really like all those guys, but going back to growing up, I used to listen to this terrible morning show duo. It’s like when you buy a CD and go, “This is great,” then 10 years later you go, “What in the hell? This is awful.” Yeah, I listened to a lot of those guys, because it’s all that was around on classic rock radio in the morning.

How often do you throw something in the play list for Off Air that you personally don’t like, but that you think others will enjoy?
It’s rare; I like to think I have a pretty wide scope. I have one fail safe at least, and that’s our volunteer for the show, Meg. Occasionally I will miss a record or go, “Eh, this wasn’t so good,” and have her listen to it, or she’ll just pick it up on her own and listen to it and go, “You’re nuts, listen to track two or seven.” Half the time we bicker back and forth, but it’s nice to have that sort of fail safe. Many times I’ve gone, “Oh man I did miss that completely.” The band The xx for example, I either didn’t listen to the record I thought I did, or I just didn’t listen to it at all, and I was like, “Yeah, here you go Meg. We sort of missed the deadline on this one.” They ended up being one of the biggest bands all year. So yeah, that was a lifesaver in that regard.

How does it feel to have one year’s worth of shows under your belt? Did it drag on or did it fly by?
It flew, couldn’t believe 52 weeks went by when it had. I like to think there’s been some growth in terms of how I present the show. I’ve got a lot of people at CPR who are trying to help me out with slowing down while talking and making sure I make sense when I say the things I do. It’s been a growth process. I’ve been in radio almost 10 years now, but this is like a whole new thing. A sense of accomplishment for sure, but we’re thinking about how to grow it from here on out. Not a lot of looking back, just what can we do better than we did last week.

Where do you see Off Air in another year?
I really want to do more in-studio performances, and I would really like to see the show move into the community a bit more, start holding events downtown, just one or two, nothing crazy at like ARCO Arena. But, you know, partnering with a place like Luigi’s Fungarden would be a completely symbiotic relationship. And, you know, partnering with other organizations in Midtown especially, because that’s the crowd we’re looking at, the twenty- and thirty-somethings in Midtown who are interested and have the time to care about up and coming bands and have the patience for that. Definitely more presence on the Web, also I’d really like to have Capital Public Radio start popping up more and more on the NPR music page as a contributing station. I’d like to see more of what we do pop up there, even if it’s jazz or blues or what have you and have Off Air help start that ball rolling.

You mentioned to me in an e-mail that your 30-second promos for Off Air are slowly going to be pulled from the airwaves on CPR. Why is that?
NPR stations are looking to do more and more online-only programs, so that would mean less and less on-air life. If it takes on a life of its own online, that should be its home territory, so make it work there without having to use the crutch of on-air. That said, there’s a lot of ways of doing that: Facebook advertisements to getting on fans’ Web sites, cross promotions, etc. We’re still, as I’m being told, “Writing the book on how to do this.” We’re sort of in the Wild Wild West. We’re not cutting through the jungle exactly, there’s a town already, there’s just no sheriff and we’re just trying to not get shot.

So while there may be less of those on-air promo spots, the promotion on Insight will still happen, I’ll show up there once or twice a month and talk about what’s on the show.

Are you nervous that will limit your ability to pull new listeners in?
That was actually one of my big concerns, and I just talked to our station manager about it. He didn’t seem to be so worried about it. There are other avenues we can take to make sure that doesn’t happen. We’re still going to put resources into the show to create it and make it go. Things like buying advertisements online and cross-promotional stuff and sharing resources and stuff.

Are you happy with where the show is currently?
I’m happy currently because we get to do it, yes. Capital Public Radio said, “Yeah we think this is something that’s worth spending some resources and some of your time in doing.” From that vantage point, that’s like been my only career goal: work in public radio before I’m 30 and start up an indie rock music show. That’s already happened, so I need to think of some good goals. On-air would be cool, but I’m really 65-35 on that, because everybody gets so bent out of shape with FCC regulations; well mainly the FCC gets bent out of shape about FCC regulations. You know, everyone’s so scared of the F word.

Yeah, what happens when you want to play the band Starfucker?
[Laughs] Exactly! Well, they changed their name; they’re called Pyramiddd now. So now we need to bring them back into the studio. It’s nice to have the avenue of the Internet. While you may not immediately get as much recognition, you’re still building a solid program and a solid audience. People who tune in are going to be tuning in because they want to. I’d like Off Air to be honest and to be true to itself, and I’m worried that we’d get more pressure to tighten up the play list perhaps if we were on-air. So yeah, right now I’m very happy with the way the show is going.

For more information about Off Air: Smart Rock Radio, or to tune in every Thursday, check out www.smartrockradio.org.