A Submerge guide to pumpkin libations

Hey look! It’s fall. Oh, there it goes. Living in Sacramento, you know that fall makes a quick appearance yet there are so many ways to indulge. Having your checklist done early, your Halloween costume pre-ordered and a trip to Apple Hill in permanent marker on the calendar is a good start, but there are still a few things that fly by under the radar. Pumpkin beer is one of them and if you’re not quick to grab a six-pack off the end cap, you might miss out on some limited edition suds that can be quite delicious. What once seemed like a novelty has now become a tradition for some serious beer drinkers and the choices have multiplied. Ales, lagers and even ciders are popping up on the shelves and each offer unique takes on the flavors that this iconic orange squash has to offer. 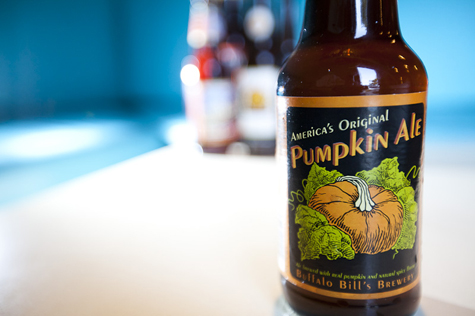 Buffalo Bill’s Brewery offers a quality pumpkin ale that is firmly centered on drinkability and not necessarily pumpkin overload. Not to say that pumpkin isn’t the focus here, but on a scale of Linus to Return to Oz, this is somewhere in the Silver Bend Pumpkin Patch. The first initial sips yield the pumpkin and then the luster slightly fades, but still very refreshing. Clocking in at a little over 5 percent alcohol and 11 IBUs (international bittering unit), even grandma might have one with you to celebrate the holidays.

The Hayward, Calif.-based brewery who are also known for their Alimony Ale and Orange Blossom Cream Ale have had their feet in the microbrew market since 1983. These guys definitely know what they’re doing with their pumpkin beer, so you’re safe to grab a six-pack and enjoy. 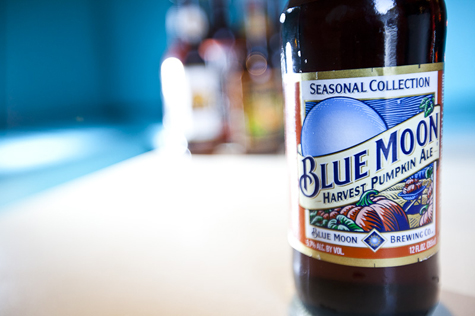 Surely the most recognizable name we’ll mention here in our Pumpkin Beer spotlight, and either you love it or you hate it. Blue Moon, a Miller/Coors product, hit the scene around 1995 at The Sandlot Brewery in Boulder, Colo. (then just owned by Coors) and it didn’t take long before it had made its way into many watering holes around the country.

Originally launched in 2006, the Harvest Pumpkin Ale has had a facelift this year and according to Miller/Coors has been “re-launched and reformulated this year.” What does that mean? Well instead of brewing the beer with just pumpkin and cloves, they add nutmeg and allspice as well. That and the label become a little less artsy and lot more branded. What you get is a quite enjoyable beer with a good body, smooth finish and great balance between the hops, pumpkin and spices. Coming in at 5.7 percent alcohol, Harvest Pumpkin Ale is a step up in intensity but not overpowering and certainly a beer you can enjoy more than one of. 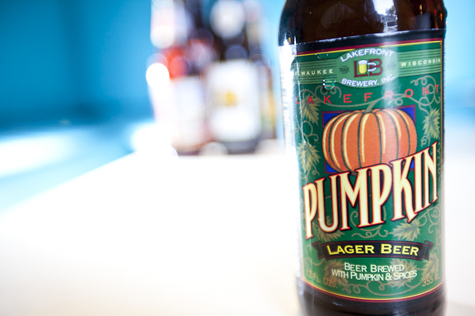 Located on the Milwaukee River in Milwaukee, Wisc.–pronounced mealy-walk-ay if you’re Alice Cooper–Lakefront Brewery has been crafting quality microbrews since 1987. The brewery itself is a huge tourist attraction to the point where sold-out brewery tours gave way to online ticket sales. Still independently owned and cranking out large volumes of beer, boasting over 20 different selections, Lakefront is testament to the little guy doing big things.

Their Pumpkin Lager Beer, apparently inspired by a Thomas Jefferson recipe that brewery owner Russ Klisch stumbled upon, is as close to pumpkin pie in a beer form that you might find. Pour one into a glass and you’ll immediately notice that the nose jumps out; heavy with pumpkin, cinnamon and clove aromas. The mouth feel echoes the nose; rich yet goes down easy and the use of Caramel and Munich malts lend to the texture and depth of this fun drinking beer. Slightly copper in color and 6 percent alcohol, you might spill a few family secrets after a few of these. 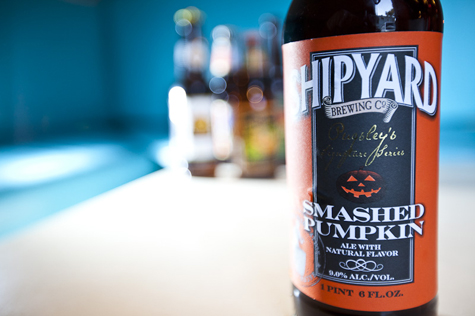 Caution: double entendre approaching! Shipyard Brewing Company’s co-founder and Master Brewer Alan Pugsley has outdone himself with this Smashed Pumpkin Ale. Not only will you be “smashed” after a few of these, but your head will feel like Gallagher took his sledgehammer to it in the morning. Packed with so much spice, pumpkin, hops and malts and 9 percent alcohol, this pumpkin beer is truly a trick and a treat. Submerge asked local beer guru Mark Neuhauser of Pangaea Two Brews Cafe what he thought and he called it “very sweet…pumpkin pie in a bottle.” Pugsley uses three different malts including Pale Ale, Wheat and Light Munich along with two different kinds of hops; Willamette and Hallertau. The high alcohol gives it the backbone and bite, making this beer perfect for any of your spice filled holiday foods.

Of course, it’s no surprise that Shipyard would blow the stem off the pumpkin beer category. These guys are known for amazing craft beers that they’ve been perfecting since 1992. They’re Maine’s largest brewery that also makes Capt’n Eli’s Soda, a craft soda that comes in seven different flavors and are the 19th largest craft brewery in the country. All that from little ol’ Maine, go figure. On top of that, Pugsley is kind of a rock star in the East Coast microbrew world. Back in the ‘80s he bounced around and helped establish quite a number of breweries as well helped design and build breweries in the United Kingdom. 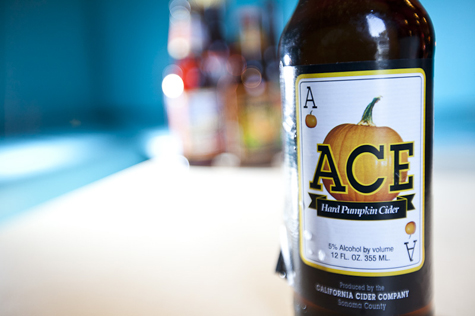 Alright, here’s your wild card. Ace Cider based out of Sebastopol, Calif., has been making cider for 15 years. Before there were really cider options, there was Ace and over the years they’ve stayed amongst the companies making really high quality, gluten free and delicious ciders. This year is the first year that the company has released their Hard Pumpkin Cider, an apple-based cider that is blended with pumpkin and allspice. Jeffrey House, owner and master cider maker, says that he made 10,000 gallons this year and it’s already all gone.

“People are racing to drink it,” says House.

With the popularity of the product, House says they’ll more than likely double or even triple production next year to meet the demand. The cider is quite a unique product that doesn’t scream pumpkin but merely suggests it. The allspice is subtle and you pick up the apple on the finish along with an interesting aftertaste reminiscent of pear candy. This cider is 5 percent alcohol and quite low in sugar content, 9 grams per 12-ounce bottle. If you’re really aiming for pumpkin, I’m not sure if this is for you but overall a tasty cider that fits in perfectly with their existing line.

These beers and ciders can be found at Total Wine, Whole Foods, Corti Bros and other select specialty markets. Call ahead because they are seasonal and will disappear quick.

Still thirsty for more pumpkin beer? Pangaea Two Brews CafÃ© has Dogfish Head’s Punkin Ale on draft. Pangaea was lucky enough to acquire three of the six kegs allocated to the entire Sacramento area, so get it while it’s here. Or, head over Alley Katz and try a Double Pumpkin Ale on draft from Sam Adams.