No Ferrari for Felipe

Most of the time you get 20 minutes. Maybe. Celebrities are busy people with complicated agendas that their publicists keep moving like a well-oiled machine. This was not the case with this past season’s winner of Last Comic Standing, Felipe Esparza. On the dot, I ran out of questions at the 20-minute mark and began to end our interview.

“You could ask me what I’m going to do with the money,” said Esparza, offering me more for us to talk about while also pointing out that I had forgotten to ask an obvious question.

Esparza was calling from Los Angeles, where he lives and where Last Comic Standing had been filmed. Esparza beat out Tommy Johnagin and Roy Wood, Jr. in the top three to become season seven’s winner and the lucky recipient of $250,000. It’s easy for me to fantasize about what I’d do with that much money (I’d piss it away on a cellar full of first growth Bordeaux and a safari to Italy to track down Monica Bellucci), but after hearing Esparza tell me a story about Paul Rodriguez’s Ferrari I wasn’t quite sure what he was going to do with it all.

One of the charities rehabilitates gang bangers and outcasts and helps them find jobs, another is an alcohol treatment center and the third is really a big middle finger to the World Wide Web of Esparza-haters.

“There’s been a lot people talking bad about me on the Internet. Saying, why do I talk like this, ‘I don’t understand his accent,’” says Esparza. “Well I got something for them, too. I’m donating money to a speech impairment school in my neighborhood.”

Esparza jokes about being a deadbeat dad, being the last on his block to screw the neighborhood slut and even throws in jokes that are borderline corny.

“The guy who wrote the song, ‘The Hokey Pokey’ passed away,” starts Esparza. “During his funeral they couldn’t close his casket because every time they put his left foot in, he put his right foot out.”

OK, that’s just plain corny. But something about him and his unique brand of esoteric one-liners won over the judges and the voters during those 10 weeks of competition. When I asked Esparza if winning was a big break, he wasn’t so quick to rattle off movie deals and HBO specials he’s got lined up. He’s still on the grind like a lot of comedians, and what comes next is new territory.

“I never made it that far,” jokes Espraza. 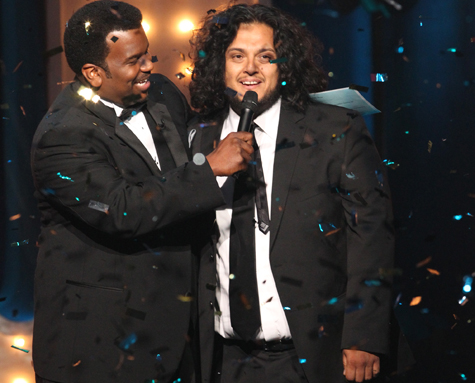 So you’ve auditioned in the past?
Yeah, and I sucked.

I didn’t see you, because you weren’t on those shows.
No, you never noticed me.

You touch yourself in this very strange way while you’re on stage. Almost like you’re trying to pinch your own nipple. Is this a weird tick you’ve developed along the way?
I think every comedian looks for something to hold on to. Some comedians, they lean on the microphone stand. Some comics sit down and others just stand still. I just walk around. I used to wear big coats, and I always closed it over me and tried to hide, because I was so scared of being on stage. And I was just trying to cover myself up like if I had a cape. And little by little I stopped holding my coat and pushing it over me. Because it looks weird. Then I just forgot about it, and now I pretend to hold a coat or something. It’s a habit I guess, I can’t get rid of it.

Normally your delivery is very laid-back and the timed structure of the show seems like it might have been a challenge for you. Did you have to adapt?
I had to adapt, because I only had two-and-a-half or three minutes to wrap it up. We had to submit three minutes of material, no more, no less. I tried to go for the strongest jokes. I have a lot of one-liners, so it was hard for me to do a story because I don’t have so many long jokes. The only long joke I have is [whispers], “I want cereal.” That took a big chance, that one and the last joke I did at the finale, “Now I know you can keep a secret.” There was a risk I took. I did those jokes at the end, because if I had done those jokes at the beginning, I probably would have lost my timing. It was hard to come up with fast jokes. Then the audience. The audience would clap at everything that Tommy and I were saying. They will applause break “hello.” I had to time the audience. I would do the setup and they’d laugh at the setup. Whoa, hold on. The joke’s not even there yet. Like, I said this joke; I said, “The restaurant that’s parked in front of my house…” That got a big ass applause break. And then the punch line was, “…got robbed after I paid.” Some of the comics, I don’t know if they were used to the crowd cheering for them so loud. It was bothering their timing a lot. Me, I was just riding the flow.

Were you writing new material along the way to pepper in with some of the older bits?
A lot of the jokes that I said in the beginning of the competition were new bits. Like the one about the new law in Arizona. I say, “That law sounds scary, but if I get deported I’m going to say the same thing I say when I get kicked out of a club. ‘But sir, I was already in there. My friends are all in there. They’re still holding my credit card.’” That was a new joke; it was only like a month old. “I want cereal” was like a year old.

Were you always a jackass growing up, or did you make your way into comedy through other channels?
Ever since my friend Jackie Escalara invited me over to his house. See, I lived in the housing projects but across the street, not even 100 feet away, was a regular neighborhood. Across the street in a regular house was my friend, Jackie Escalara. He introduced me to Bill Cosby on a little Fisher-Price record player. I listened to that whole bit, about “me and my brother Russell.” The one where Bill Cosby is talking about him and his brother fighting all night. And from then on, I said, man this is funny. I memorized the album. It’s weird how when you’re a kid, when you really love something, you remember it–unlike math and English. You forget that shit when you get home. I wanted to be a comedian from then on.

I don’t want to think about the three of them having a baby, at all.
I know huh? It would be crazy. Drinking wine like George Carlin, riding in a Nova with hubcaps and smoking crack in the back! I love Paul Rodriguez because he has different material all the time, and he’s always talking shit about somebody. It’s hilarious. Like I remember Carlos Mencia was on stage preaching. Like he always does now, preaching about how much money he made. He was saying he made a million dollars. But, when we were in the parking lot–there were a bunch of comedians hanging out in our group, and Paul Rodriguez has a Ferrari man. A Ferrari Testarossa. One with a clear fiberglass and you can see the engine in the back. He revs that shit up! I mean loud! He looks at Carlos Mencia and says, “Hey Carlos, next year maybe you should make three million dollars!” And takes off on Sunset.

What are you going to do next? Where are you headed?
I want to continue. I’m going to do the 65-city tour first and foremost with the other four comics. Mike Destefano, Mike Hugh, Roy Woods Jr. and Tommy Johnagin. Four of the strongest comics I ever had to compete with in my life, in comedy. I have a movie that I did with Paul Rodriguez called I Am Not Like That No More, and we’re going to shop that around. And also I’m going to be honored by the city of Los Angeles for being a local hero.

Who did you rescue?
Nobody.

Are you getting a Purple Heart?
[Laughs] You’re the first person to ask me a funny question. That’s funny.

Felipe Esparza will perform at The Crest Theatre on Sept. 9. Tickets start at $25. For more on the show and Felipe Esparza, go to www.felipesworld.com.