I really miss Red Lotus. Chef Billy Ngo’s dim sum-inspired restaurant featured some of my favorite dishes that I often crave like the kung pao chicken wings, seafood soup and the pork belly buns. Ngo was onto something great that unfortunately ended prematurely, and after the closing of the restaurant in September 2011, I was sure there were still some great ideas up the young chef’s sleeve. Ngo had been scheming with two other local restaurant owners, Aimal Formoli and Suzanne Ricci of the popular East Sacramento spot Formoli’s Bistro, to host monthly Slow Beer Movement Dinners, where the two chefs collaborated on dishes that local beer buff Mark Neuhauser then paired with tasty suds. Some very memorable dishes came from these dinners including a squid ink pasta with baby octopi, hop-smoked chicken and of course, more pork belly dishes that the two chefs seemed to always include in their creations.

It was no surprise that after Formoli’s was finished getting settled in their new location a bit further down J Street and Ngo had his feet back on the ground, comfortable again behind the sushi counter at Kru, that the three would embark on their next food venture: Pork Belly Grub Shack. The Natomas restaurant opened in early November 2011 with an introductory menu, casual seating and dÃ©cor and the same kind of friendly faces you might find at Kru or Formoli’s. It seems to say, “Welcome, come in and eat something good.”

The menu that consists of salads, burgers, sandwiches and other items like fries, tacos and fish and chips is just a start for Pork Belly. Natomas is still getting acquainted with them and vice versa. 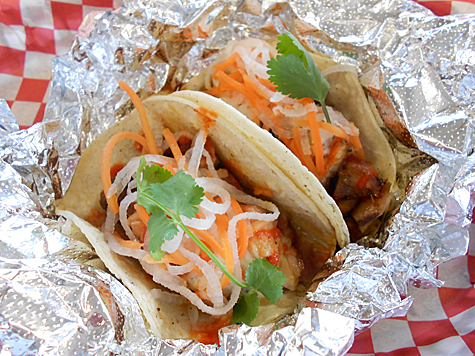 “We’re just trying to feel out what people like and what kind of neighborhood this is so that we can adjust to what their needs are,” says Kim Vu of Pork Belly. “The neighborhood is definitely new to all of us.”

Vu is no stranger to Ngo’s restaurants, having worked at both Kru and Red Lotus, and she knows the importance of first impressions as well as changing to meet the needs of customers. But so far Vu says business has been great. “We definitely have good reviews and good feedback when people come in,” says Vu.

Pork Belly has a great balance of simple and tasty comfort food combined with Asian influences that make for a very approachable menu. Don’t let the name mislead you into thinking that there’s going to be heaps of pork belly on every plate. Many of the dishes like the Catfish Po-Boy ($7.50) on a French baguette with housemade slaw and tartar sauce or the Porkless bella Burger ($7.00), a portabella mushroom burger with jack cheese, tomatoes, greens and truffle oil, don’t have pork belly on them at all. The ones that do however, like the Asian Street Tacos ($1.75 each) with pork belly in corn tortillas with pickled carrots, daikon, cilantro, spicy teriyaki sauce and lemon pepper aioli, are absolute home runs and showcase the fatty cut of pork in all its glory.

“This area, people don’t know what pork belly is. It’s a little different with the food scene in downtown. Everybody knows what it is, it’s on everybody’s menu,”

Often the best way to describe pork belly to someone is to let them know that bacon comes from this same cut of the pig. But pork belly isn’t bacon in that it’s not seasoned and cured. With pork belly, you see a thicker cut of meat with a delicious portion of fat that can be prepared in many different fashions and incorporated into many different styles of dishes. Chefs tend to really love working with pork belly and, in the past five years or so, there’s been more and more menus with dishes showcasing its range. 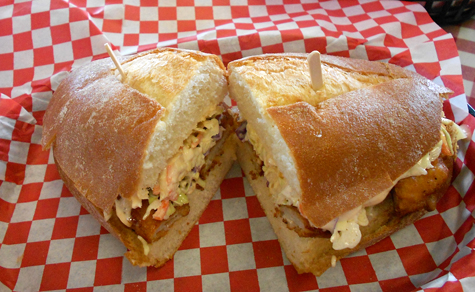 Chef Formoli’s touch makes its way into the burger selection, an area he’s proven to be quite proficient in. If you haven’t tried the much-raved about Whiskey Burger at Formoli’s Bistro, then I recommend you run, not walk, to eat one now. Pork Belly throws a little hip-hop homage into the mix with burgers like the Notorious P.I.G. or the Big Piggin’ (Pig Pimpin’? No?). But when I visited, these tempting burgers were trumped by a behemoth of a burger called none other than the Hot Mess. I had to order it. Not because its alluring name conjured memories of my romantic life’s past (I like classy broads), but because the sheer curiosity of what this “mess” might look and taste like was too much to bear. Two patties of beef with melted jack and cheddar, piled with sweet caramelized onions, a heavenly fried egg, barbecue sauce (oh my!) and roasted garlic aioli on sourdough. I had finally met my match. The Hot Mess is delicious in all its heart-stopping glory, but I recommend you might want to split yours with a friend.

Items I must return to try are too many to mention; but the banh mi is amongst the ranks, and certainly the French Pig with melted brie cheese, roasted tomatoes and truffle oil on sourdough is a must try. Specials rotate throughout the week and, knowing the chefs, inventive pork presentations will continue to be offered. And progressive still, there is talk of introducing a dinner menu along with a beer and wine list. As far as I’m concerned, pork belly needs these two components to seal the deal in my mouth.

“It goes hand and hand with this kind of food. The food is good in the winter time because it’s nice and heavy and it warms you up, and in the summertime it’s paired well with beer,” agrees Vu.

Pork Belly is already off to a great start, so whatever additions Ngo, Formoli and Ricci make, they will only be building and working toward a better version of what they have now. I recommend you make the trip to Natomas if you haven’t already; your belly will thank you. 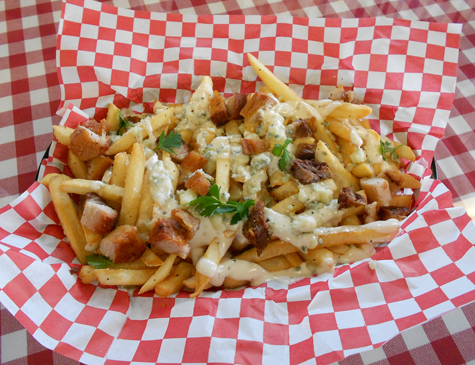