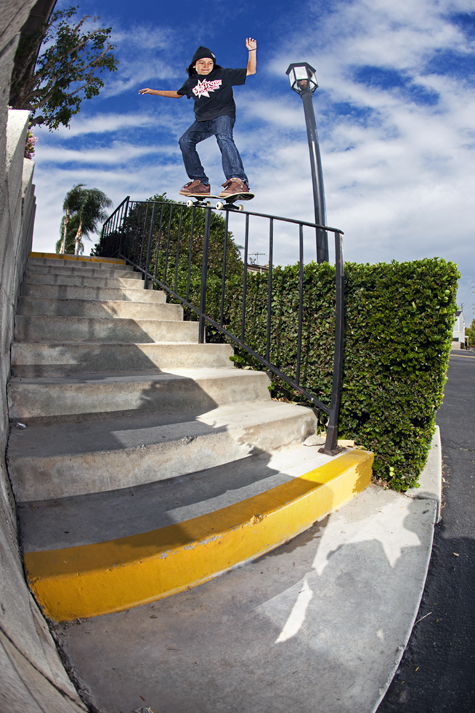 Flip AM team member Louie Lopez is on the up

Amateur Flip Team skater and big air-grabbing 16-year-old Louie Lopez is one rad little grom on the board. So gnarly, he and his Flip buddy Curren Caples take trick requests via text message. Sporting a regular stance, Lopez is stands under 5-feet, with a mane of black hair that trails behind him like a super hero’s cape when he is on the move.

Days before Lopez’ buttery-ass 16th birthday, because there’s nothing sweet about skating, he will be tearing up B Street Skate Park with Geoff Rowley and others as the Flip West Coast Represent Tour hits Sacramento.

Lopez came up in Hawthorne, Calif., honing his skills at the local skate park he fondly refers to as “The Dirty.” After being discovered by Lance Mountain of Flip Skateboarding, in a kind of creepy manner (keep reading on), Lopez signed on with the AM team. Besides being a member of the Flip team, he’s secured endorsements with Volcom Clothing, Globe Shoes, Fury Trucks and Madrid Fly Paper. The kid is bringing the ruckus, so to speak, to skating at an exceptionally young age. Two years ago he took sixth at the Dam Am in Costa Mesa and at this year’s Amsterdam Am he took second to Alec Majerus. He’s been on Fuel TV as part of its New Pollution series, Thrasher Magazine videos and has a role in Flip’s Extremely Sorry.

I was struck by Lopez’s favorite music to throw on his iPod when he’s out grinding; a 16-year-old who listens to Wu-Tang Clan? Enter the Wu-tang: 36 Chambers came out a year before he was born.

Wow, selecting two off the first album.
I haven’t been listening to Wu-Tang for too long, maybe like two years or something. A lot of my friends used to listen to it. I started listening to it and I liked it.

How did you get on the Flip team?
It was through Lance Mountain. I used to skate with him at this skate park called Vance Park in Orange County. He called the owner [of Flip Skateboards] to go watch me skate. I didn’t even know who he was. It was really crazy, because he didn’t look like a skater. He was just watching me skate. Wherever I’d skate, he’d appear. It was just like, what’s going on? Then he asked me to join Flip.

Were you creeped out by him at first?
Not really creeped out. I just didn’t know what was going on.

So you’re on the Flip AM team right now. What’s it going to take for you to advance to the pro squad?
To be a pro, I guess you have to keep skating, put in your work and when your sponsors think you’re ready to go pro they make the move, I guess. I’ve been skating for Flip since I was 11 or 12. I’m about to turn 16 now, on Nov. 26.

You’ve skated Steve Berra and Eric Koston’s skate park, the Berrics. What’s your favorite part of that indoor park?
They have the best flat bar ever. It’s really long and circular. It’s the funnest thing there.

You made it into the Sorry video series. Did you ever think you’d see a claymation version of yourself?
No. I would never have thought that. I was extremely happy to know about them and be in the video. I didn’t have any idea what it was going to look like. When you don’t have any idea, you’re antsy to see it and nervous because you don’t know what to expect.

Being a skater and having braces, are your parents concerned about their investment in keeping your teeth straight?
Actually I just got my braces [taken] off like three weeks ago. It feels weird. You keep playing with your teeth with your tongue. At first you feel like you have the biggest lips because they flap over more on your teeth. I don’t think [my parents] are concerned, though. If it happens, it happens, I guess.

You were able to pull off grinds on some pretty lengthy stairs. Have you ever challenged Geoff Rowley or any of the Flip team to a stairs-off?
No. I’ve never done that. They’d probably take me. They’ve tried to ollie 20 stairs and stuff. The most I’ve ollied is probably 14.

Is there a chance that when you come to Sacramento on the tour that you could lay down a buttery-ass heel flip and give a shout out to Submerge?
Yeah. I’ll try to do one, but I don’t know how buttery it will be. I won’t pop high off the ground, that’s for sure. But, I’ll try one.