J-E Paino, a Sacramento native by way of San Francisco, is the proprietor of Ruhstaller Beer, an up and coming Sacramento beer company whose name and history date back to the 1800s when Sacramento was a true Wild West beer town. While studying at UC Davis, Paino fell in the love with the rich and bountiful story of the Sacramento beer industry and how west of the Mississippi, we were home to the largest brewing facility–Buffalo Brewery where the present day Sacramento Bee is located–larger in fact than Anheuser-Busch in St. Louis, Mo. To add, Sacramento had numerous brewing facilities that were in full production, brewing and shipping out beer to thirsty Americans.

“Sacramento’s never done anything better than make beer,” says Paino. “We were made to make beer.”

That we were–and still are today. It all makes sense, really. Consider that Sacramento has dark, nutrient-rich Delta soil, two rivers intersecting the city, trains constantly whistling and crisscrossing the streets and, until a while back, acres and acres of hops and barley growing all throughout our surrounding areas. There’s farmland, transportation and the climate for key ingredients. This isn’t breaking news to your grandparents because they remember some of this stuff, but the younger generations haven’t been exposed to this very important piece of Sacramento’s history because there isn’t much record of it and the schools sure as hell aren’t assigning home brewing as class projects.

“And there’s absolutely no remnant of it. No one talks about it, you read history books–gone,” says Paino with fervor.

Paino seems to be on a personal mission to change that, and he’s doing it in the best way he sees fit; by making beer that pays homage to this time and place.

While Paino was a student at UC Davis, he began a project that consisted of researching the history of Sacramento. He realized that there was this lack of information and he kept coming up with the same results.

“They all went the same way,” says Paino. “John Sutter lands, some Indians, lots of flooding, tomatoes, cows and all of a sudden there’s a governor’s mansion built and we’re the capital of California.”

And hell! Throw in the trains and trees and that’s a great history, something that many of us pride ourselves on and more often than not becomes the talking point of what makes Sacramento what it is. But Paino kept poking his nose around and eventually he struck upon a different version of what Sacramento’s history once was.

“Somehow I stumbled on a book by Ed Carrol. He was doing his thesis at Sacramento State. He wrote about the history of Sacramento, the beer industry in Sacramento,” explains Paino.

The Sacramento History Foundation ended up publishing a portion of Carrol’s thesis, which Paino read and was inspired by.

“It was phenomenal,” exclaims Paino. 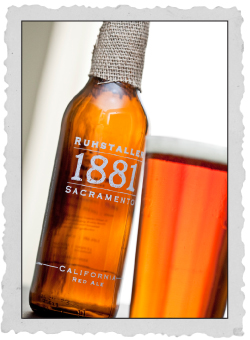 The figurehead that continued to pop up was a gentleman by the name of Captain Frank Ruhstaller. He left home with his brother to flee the constraints of family duties and commitment. According to Paino’s research, the brothers left Switzerland because they didn’t want to be priests like their father had envisioned; they were set on brewing beer. Frank bounced from his homeland to the East Coast of the United States and eventually ended up in Sacramento, where he was part of Buffalo Brewery. He eventually broke off from Buffalo and started his own craft brewery called Ruhstaller where his “flagship beer was called Gilt Edge Lager.” The focus was on premium beer and making it the beer of Sacramento.

From there, Paino’s direction moved toward actually making a beer. It all began with Charlie Bamforth, the guru of fermentation sciences at Sacramento State, who is responsible for more than a few brewers’ careers. To even begin to touch on his influence and/or career attributes, well, that’s an entirely different article. Paino came to Bamforth looking for guidance and Bamforth lent him some of his literature–some science and some history–and Paino read both. But Paino is no brewer and the history was more to his liking. “Well you’re going to have trouble making beer,” Bamforth said to Paino. He then recommended a few candidates, and suddenly Paino was on the path to turning his love of Sacramento beer history into an actual drinkable product.

One was a gentleman by the name of Peter Hoey and the other was a woman by the name of Lindsay Guerdrum, a star student of Bamforth, who at the time was being offered a position at New Belgium Brewing Company. Yes, the New Belgium as in Fat Tire. Paino wasn’t in the position to match that offer, nor was he going to hold her back.

“We said, we’re the little guy. You can always work for the little guy, you only get one shot working for the big guy,” says Paino.

So Hoey was the man for the job. He and Paino got along well in the first place, and so began production of Ruhstaller Beer. Paino’s philosophy was focused on keeping the product locally produced, something not too common in the Sacramento brewing community. And with this, the expression of place could speak for itself.

“Let’s go find the best ingredients we can, source them locally as possible and let’s go make a beer that isn’t just a one liner but it’s more sophisticated. It kind of has a nose and kind of has a beginning middle and end, and when you’re done with it you want to read the book over again,” says Paino.

Paino is passionately telling me all of this as he sits across from me at a high top table in the corner of a very crowded and noisy Grange Restaurant, tucked underneath the elegant and very boutique Citizen Hotel. He’s a clean-cut guy, tightly buttoned collared shirt tucked into his jeans and he’s sipping tea not beer. I later figured out that he knew he was going to talk my ear off for an hour about his beer and Sacramento’s beer history. He was sort of warming up like a vocalist might do before a concert. “He looks like the guy from Cash Cab but with darker features,” said a few bartenders at Grange, joking lightly when I asked what he looked like. Paino was just about the only guy I hadn’t met or spoken to that was involved with Ruhstsaller. I was already greatly familiar with their PR and social media aficionado, Andrew Calisterio, as well as the aforementioned brewer, Peter Hoey, who seems to have his fingers in every kettle around town these days. I tried to contact him for this story, and he seemed apologetic for being out of touch, being what he called “a moving target these days.” Hoey stopped consulting for Ruhstaller in November, he told Submerge in an email, but all of the recipes for their current lineup of beers are still his.

The current lineup consists of their 1881 California red ale, the Captain California Black IPA and the wet hopped beer, Hop Sac, which is a seasonal beer.

Rushstaller is still a fledgling beer company, having been in business for roughly two and a half years and actually making beer for nine months. Their product is solid but the future is wild like the history off which they feed. Their crudely spray-painted logo that dons their wooden mobile taps and kegs is indicative of the rustic vibe they seek to portray. Even the bottles that can be found on the shelves of Whole Foods, Nugget Market, Pangaea and Corti Brothers are draped in burlap, a material that Paino says “holds California together” and is “the working man’s fabric.” This is a beer that is meant to speak to the people. Listen up Sacramento, this is your beer.

Look out for Ruhstaller events during Sacramento Beer Week including collaborations with Grange and Charlie Bamforth, Magpie Catering, Mulvaney’s Building and Loan and the infamous Rex Bikes. For a full list of events, go to Sacramentobeerweek.com or Ruhstallerbeer.com/events