Ryan Dungey knows what it’s like to win. At just 23 years of age, he’s stood atop more podiums for winning races on his dirtbike than he can count. In 2010 he became the first ever 450-class rookie to win both the indoor supercross and outdoor motocross series championships in the same year. In 2012 he once again won the outdoor championship. He’s got some of the biggest sponsors in the world; even mega-retailer Target backs Dungey and recently featured him in the premiere episode of a video series they are producing called The Way Up, which is directed by pro skater Steve Berra. We could keep going, but you probably get the idea, Dungey is a big deal in the world of motocross.

He’s fast, he’s smooth and he’s strong. But you won’t find Dungey bragging about any of his impressive accolades and accomplishments, nor will you hear him complaining when he doesn’t win, because off the track he is one of the nicest guys you’ll ever meet. Humble and down to earth, Dungey is always quick to thank his hard working crew after a victory.

“I don’t deserve the credit,” he recently told Submerge. “Those guys do.”

With the 2013 indoor supercross series in the books and having ended up in third place overall (just one point back from second), Dungey is no doubt looking to get back on top coming into the grueling 12-round outdoor championship which kicks off on Saturday, May 18 at the Red Bull Hangtown Motocross Classic right here in Sacramento. And just because he’s coming off a third place finish in this year’s supercross, don’t think Dungey isn’t a title competitor in this year’s outdoor season. Heck, even RacerX, an industry standard publication, is quick to point that out. “He’s just so solid that it’s hard to ever count him out,” they recently published in an article.

Submerge caught up with Dungey via telephone just before the final round of supercross to chat about the quick two-week transition from the indoor races to the outdoor races, whether or not he feels pressure coming in as reigning outdoor champion, how he keeps focus on big race days and because May is Bike Month in Sacramento, we briefly chat about his love of cycling. 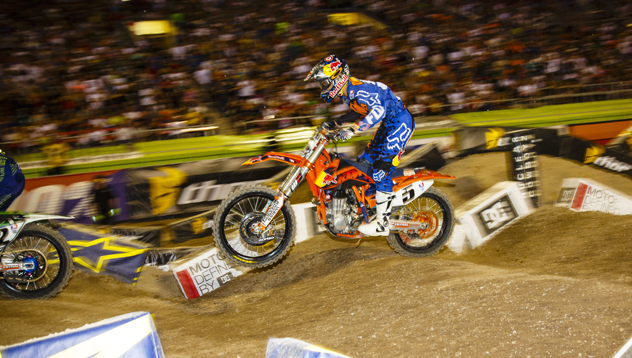 What is the transition from the supercross series to the motocross series like for you and your team? Is it more mental, or physically do you change up your training routine as well?
You know it’s pretty much everything. I mean obviously coming off supercross is good, you know, you just keep racing so not much changes there. But the difference between supercross and motocross is that supercross is a lot shorter races. With motocross there are two 35-minute motos, which is 70 minutes of racing. You’re only doing maybe 25 minutes of racing in supercross. So it’s kind of one of those things where everyone has to deal with the same thing fitness wise. You build a base over the years and you look to kind of grow that. As far as going into motocross, you feel better and better every year just because you’ve been able to carry that over so your body adapts really quickly. But obviously just try to get physically in as top shape as you can getting ready for the outdoors as quick as you can, with the two weeks that you have.

Coming into Hangtown, do you do any sort of special preparations or training? Having raced there so many times, I would imagine you know the track like the back of your hand.
Yeah I feel like a lot of the tracks on the national circuit I know well, but Hangtown is one of those race tracks that’s challenging and technical. As it goes through the day it gets dried out. As far as something certain that we’re preparing for the race, I don’t feel like there’s one certain thing. Hangtown is that first race of the series where it’s like, alright, we did the best we could to get the best setup we could and now let’s see where we’re at and then we’ll go from there and build off of that. We go in to win it, but basically you get to see where everyone else is at, too. 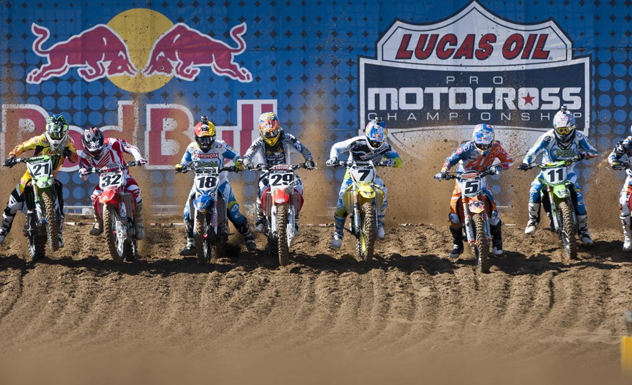 What are some of your favorite (or least favorite) things about racing at Hangtown?
Hangtown is kind of tough because part of the year it’s hot, part of the year it’s cold. They usually haul a lot of different kinds of dirt in there. It definitely gets rough. It gets really choppy and rutted. It’s just one of those tracks that rattles you so much that you really have to hang onto the bike, so it takes a lot of energy.

Sometimes those ruts look two-feet deep, man, those things are intense!
[Laughs] Yeah, it is. It’s funny because you look at the ground and you’re like, “There’s no way it could get that rutted.” But it does. They water it, and it just gets deeper and deeper every moto. It’s funny because it gets so choppy that it just shakes your whole body and bike so you’re just hanging onto that thing. It’s physically tough. That’s what makes that track a tough one. 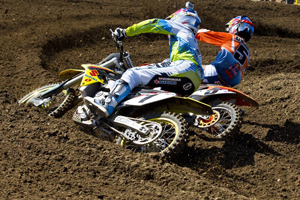 Coming off of last year’s championship in the outdoor series, do you feel pressure this year to repeat and defend your title?
You know, I don’t really feel any pressure. Winning the championship last year was definitely a big stepping stone for us, just because it was a brand new team [Red Bull KTM] and brand new bikes. But obviously, moving forward, it’s a new year, and we’ll be running the No. 1 plate. There’s a duty to keep that, and we know that. But you can’t get too far ahead of yourself. You’ve got to take each race one at a time and perform your best at the moment.

I feel like it’s going to be a good year, a lot of tough competition. It’s going to be good racing. I would really like to win this one as well and to keep moving forward. Every year is different, though, you know what I mean? If you keep thinking in the past and how you did this last year, it keeps you from moving forward. Put that behind, take what you learn. It’s a new year, a new championship, new racers and everything. I’m excited.

Last year, you and Mike Alessi had some entertaining and extremely close battles. This year, who are you most looking forward to battling against?
Alessi definitely put up some strong, hard fights and made it tough without a doubt. This year, there are a couple guys that were missing last year like Ryan Villopoto [overall winner of the 2013 supercross series], Chad Reed and James Stewart. Stewart was there earlier in the season but he had an injury unfortunately. We were going pretty good, having some good battles. I think this year you can expect a lot of good races. When the gate drops, it’s going to be a battle all the way to the finish. Guys are going to be pushing each other to get better every single week and so the pace is only going to get faster. It’s good for the sport, it’s good for us racers and it’s good for the fans.

What helps you keep focus on big race days?
You know, through trial and error you learn along the way. I think for me it’s just wanting to win, wanting to be the best at my sport and doing it right all the way. We work really hard during the week and I don’t put in all that work to get second, you know. We go out there to win. When it comes time and everything’s ready to go and things are on the line, to keep things in perspective in high-pressure situations, it’s stressful and a lot to handle. But I feel like I would much rather be in that position than never ever feeling that at all. I don’t think a lot of people like that. But I do like being in that position. I think to myself, “It’s just a race,” but it sure is important to us. As long as I do everything I can and give it 100 percent, then I’m happy with that. You can’t ride with fear. That’s like riding with the brake on. 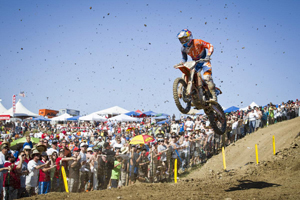 To switch gears and wrap things up, May is considered “Bike Month” here in Sacramento and I know you’re way into cycling. Got any tips for fellow cyclists out there who are looking to push themselves and start taking longer rides and/or getting more serious about cycling?
Absolutely! I think a lot of people think I cycle just to get myself into shape and for cross training. You can build a great base for motocross, sure. But I feel like if I weren’t racing, I would still be cycling, probably even longer hours than I do now. I think it’s a great way to get outside. It’s not so hard on your body. It’s non-impact so you can go long distances and just keep building that. Just getting out there and seeing the country, you know. You can see a lot on a bicycle. There’s no better way to get fit, whether to lose weight or ride for a cause, there are so many things you can do on your bicycle.

Reigning outdoor motocross champion Ryan Dungey will race alongside other world-class athletes at the Red Bull Hangtown Motocross Classic in Sacramento on Saturday, May 18, 2013. It is the first of 12 outdoor stops for the season. Learn more about the race at http://hangtownmx.com/. Learn more about Ryan Dungey at Ryandungey.com