Bring It on Home!

For over 10 years Tyler Coppin, a Sacramento native turned Australian actor and writer, has traveled the world with his one-man show Lyrebird, Tales of Helpmann, receiving nothing but positive reviews along the way.

Lyrebird”¦ is an incredibly entertaining and hilarious 90-minute production about the life and career of an aging theatrical star, Sir Robert Helpmann. Helpmann was one of Australia’s first true stars and went on to have great success internationally in dance, theater and film. You might recognize him from his role as the “Child Catcher” in the classic 1968 film Chitty Chitty Bang Bang, but whether you are familiar with Helpman’s work or not, Lyrebird”¦ is sure to entertain theatre junkies and rookies alike. Time Magazine has called it “Spellbinding,” and Variety has dubbed it, “An inspiring, virtuoso performance.”

The United States premier is set for Feb. 5-22 right here in Sacramento at the 24th Street Theatre, and Coppin could not be more excited to be bringing his production home. Submerge recently caught up with the thickly accented Aussie to chat about the play.

What compelled you to write and perform this play about Sir Robert Helpmann in the first place?
You don’t have much power as an actor, and that’s what I am. It’s very creative, but you’re powerless. You’re left to the whim of a producer liking you or a director liking you, or you’re auditioning to get the role. You really don’t make your own decisions until you get onstage and then you’re told by a director what to do. The most empowering thing that you can do, that I’ve found, is to write your own play, write your own show. I like dressing up and making people laugh. I wanted to make a one-man show that I could travel the world with. 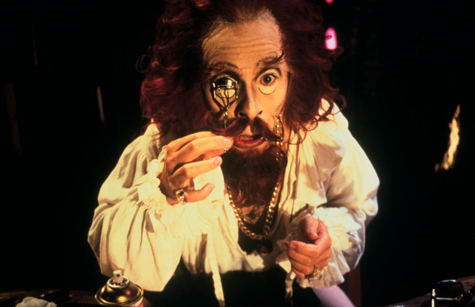 Sum up Helpmann for those of us who aren’t familiar with the man and his work.
He was the ultimate in British theater fairies. The old-style theatrical type of guy that sits in an enormous gold throne telling fabulous stories. Just from another time and place. Facelifts for days, you know that ’70s style, just dripping with jewelry. I just thought, “I can paint this guy’s face on myself like a Halloween mask and it could be a vehicle for me to tell his story.”
It’s a really interesting story about this little guy who was born in South Australia last century and he wanted to be a ballet dancer. Now, that was unheard-of, because he grew up on a farm and his father just said, “You’re not fucking going to do that, over my dead body!” [Laughs] And then eventually he said, “Yeah go for it.”

Is there a famous American actor or performer you would compare him to?
I have thought about this so much. John Malkovich has different shades, you know? He’s like the actor’s actor. Theater is his life and his life is in theater. Helpmann was so dramatic, and that’s what I find funny. It’s comedic but it’s also beautiful. He’d say, “I have no life other than theater.”

So he sort of openly admitted his addiction to theater?
Exactly! And, see, my thing was punk music. When the Sex Pistols exploded, that’s when I was sort of like just fresh out of home. I followed the whole punk explosion and was really into it. So the idea of Robert Helpmann, as a young actor—which I was—kind of really repulsed me. He was the older actor that kind of said, “You can never aspire to what I’ve achieved.”

And so I kind of did this originally to slap him in the face [laughs]. Then I realized he was really great; so it started from kind of an annoyed disdain for the man and I totally ended up loving the guy and his amazing achievements.

It’s been quite a run now. You’ve been performing this play for 10 years; did you ever think it would last this long or become this successful?
No, I didn’t. I had no idea. It was originally a party piece that I wrote with some friends, it was called Bobby’s Fluffy Trip. Then I just extracted that characterization and made a one-person show out of it. 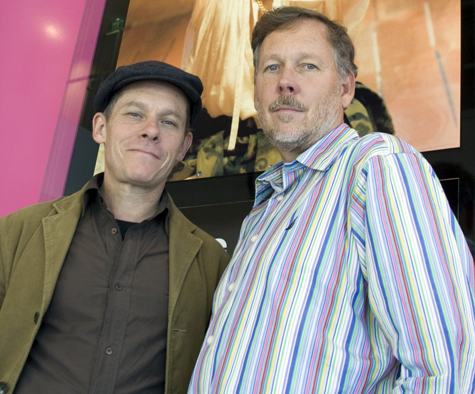 Tyler Coppin (L) and brother Mitch (R) prior to a performance in Australia | Photo: Virginia Wong

You grew up in Sacramento. How does it feel to be bringing Lyrebird”¦ home for the first time?
It’s amazing. I’ve never worked with my brother Mitch, and he’s never worked in theater. He came to New Zealand and saw the show and loved it, and he said, “I think you should do it in Sacramento.”

Then he called me again about it a couple years ago, and I said, “Well, no offense, but why? It’s a lot of work, you know.” Then I thought, “It will be great to work with Mitch. He wants to do something creative.”

So it’s more of a family effort than it’s ever been.
[Laughs] Well yeah, completely. At first when I thought about it, I realized it’s nice being away overseas, because it’s kind of an icky show in a way—a lot of makeup, and a lot of hair spray and I smoke herbal cigarettes [laughs]. I’ve got all these people I haven’t seen in a long time that are related to me and they’re coming, and I’m playing this character. Not that I care, but this is the first time they’re going to see me as this character and they’re going to think, “What happened to Tyler?” But it’s good, the whole point is to hide behind a character and make people laugh.