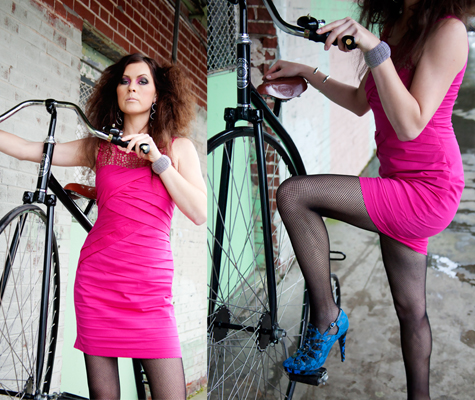 With the rising price of gas, alternative forms of transportation are becoming more attractive than ever. Local bicycle advocate/blogger Lorena Beightler and fashion blogger Kari Shipman are doing their best to make the bike even more appealing with their second annual VÃ©lo and Vintage Fashion Show, which will take place at Hot Italian on May 7, 2011 as part of Bike Month.

When Submerge caught up with Beightler and Shipman for two separate interviews on consecutive days, both were understandably busy. Talking to press, going to fittings, arranging photo shoots–however, the extra workload VÃ©lo and Vintage heaps onto their plates certainly doesn’t seem like a burden. As Shipman simply puts it, “I put on these kinds of shows because I like doing it.”

Shipman is the founder of Juniper*James (Juniperjames.wordpress.com), a Sacramento fashion blog that just very recently celebrated its second anniversary. She serves as the “point person” for the fashion side of VÃ©lo and Vintage. This year’s show will feature 10 models, each with three different looks (as well as a different bicycle to accompany each model for each different look–a total of 30 bikes), which she says is a bit more than she had to put together last year. However, she doesn’t have to do it all alone. She says the process of putting the show together is very collaborative.

“I don’t have a ton of experience or super in the cycling world, kind of like [Lorena] dresses great, but she’s not super in the fashion world. But that’s why it works as a collaboration,” Shipman explains.

“She comes with me to the fittings and we agree or disagree depending upon how,” Shipman continues. “We come to an agreement at some point and say that we collaborated on that look.”

If Shipman’s keen eye is what lends VÃ©lo and Vintage its compelling style, it’s Beightler who imbues the project with its substance. Inspired by CopenhagenCycleChic.com, Beightler started her own version (SacCycleChic.com) in 2008 after she “had given up my car and acquired a bicycle and was living in Midtown.” 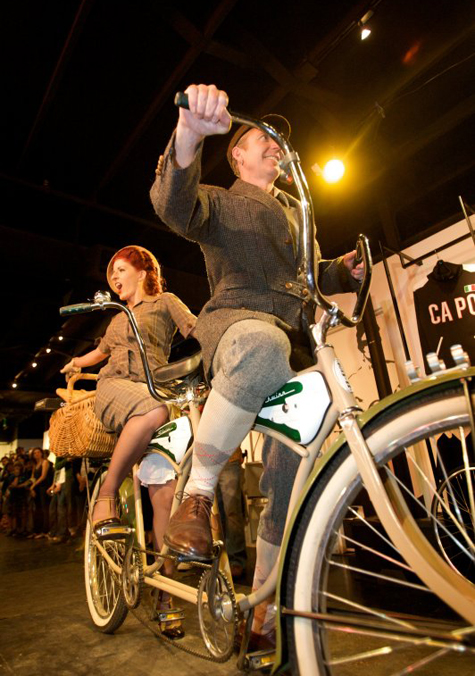 At first it was slow going for the site. Beightler says it was difficult to find cyclists who, like herself, just wanted to “be comfortable and look pretty.” She says that all changed in 2010 when “everybody was on a bicycle and wearing high heels and wearing really incredible outfits and using the bicycle to do things, carry mirrors, carry their boxes, move. It just became a sensation overnight, in our town anyway,” she says.

SacCycleChic.com showcases the bicycle as a means of transportation as opposed to just a recreational item. It shows people around Sacramento on bicycles, but dressed as if they were going out, on their way to work, etc.–i.e. not dolled up in helmets and Lycra.

“The idea is demystifying the bicycle,” Beightler says of the site. “This idea that you have to dress in a certain way to get on a bicycle, because the bicycle is too dangerous–you know, the bicycle is fun. It’s fun to be on a bicycle. Just dress for your destination, not for the trip.”

Shipman echoes Beightler’s “dress for your destination” sentiment. Though Shipman is relatively new to Midtown bicycle culture, she said working on last year’s show introduced her full-force into the energetic and passionate community. Living outside of Midtown, she commutes via car to her office, but after that you’ll find her on her bike, high heels and all.

“You’d be surprised, but it’s actually easier for me than riding in flats,” Shipman says. “It doesn’t seem like it would be, but when you have really high heels on, you can hook them over the pedals, and it feels way more secure.”

Beightler and Shipman’s attitudes toward the bicycle are reflected in VÃ©lo and Vintage, but the show also highlights their love for Midtown bicycle culture. According to Beightler, last year’s show was aimed at bringing the community together. That element is still a part of this year’s show; however, it first and foremost will serve as a celebration of Midtown.

“We are celebrating our bicycle culture, things that speak to the different aspects of our daily lives,” Beightler explains.

It was important to both of the show’s founders that VÃ©lo and Vintage grows and remains relevant. That’s why this year there will be some changes that will keep the event fresh. Instead of the fashion being strictly vintage, Shipman and Beightler will incorporate more modern items found in local boutiques into the mix to keep things fresh.

“We want to be able to show people that you can take current fashion and infuse vintage into it and you can use that to personalize that and make it your own, and then pairing that with a bike that has its own personality,” Shipman says.

She hopes mixing things up will keep VÃ©lo and Vintage vital and important to Midtown bicycle culture.

“There are plenty of bands that had one hit that everyone loved, but they didn’t know how to do anything else,” Shipman says. “I think the second year is important for us to say we’re innovative, we’re relevant and we have something to say about bicycle culture here in Midtown.”

While that culture is certainly strong and growing, it’s perhaps not getting the respect it deserves. Nearby Davis captures the headlines in that regard: In 2006, it was named the best small town for cycling in Bicycling America’s “America’s Best Cycling Cities”; in 2010, it became home to the United States Bicycling Hall of Fame. But Beightler is determined that Sacramento gets its due. An event like VÃ©lo and Vintage puts Sacramento’s best foot forward, but she believes there’s more work to be done, and making the River City more bicycle friendly is something that should come from its leaders. During our interview, Beightler is critical of Sacramento Mayor Kevin Johnson for not setting a better example.

“If you want to change, you have to come from the top,” Beightler says. “The reason why Davis and Portland [Ore.] are at the level they are as far as cycling community is concerned, it’s because their officials are heading to work on a bicycle. I think that’s what’s missing here. If our mayor was going to work on a bicycle–he lives close enough–and if he could do it once a week, boy, he would earn my respect. Plus, he would be more in touch with the bicycling community that’s growing in his city.”

Another thing that could help improve Sacramento’s standing in the bicycle community is Beightler’s recent invitation to the 2011 Cycle Chic Blogger Conference, which will be held in Barcelona, Spain, in June. Beightler says she was one of the very few from the United States to be asked to participate in this invite-only conference, and it’s a huge honor for her.

“To have the opportunity to be in an international conference and tell people what Sacramento has to offer and how it’s coming along as an incredible bicycle culture, I’m very proud to be able to do that,” she says.

If nothing else, Sacramento’s bicycle community can hang its hat (note: not helmet) on creative people like Beightler and Shipman who are doing their best to make a difference and have a good time in the process. Shipman says that though she’s still new to the Midtown bicycle community, she was welcomed with open arms, and she’s still astonished by the remarkable individuals she sees navigating Sacramento’s urban grid on two wheels.

“I’m a very creative artist/musician type, so I love seeing personal expression anywhere,” she says. “I like it when people have lights attached to their bikes–Christmas lights. There are a couple of guys who have straight up stereo systems wired into their bike and they go around blasting awesome music, and I’m like, ‘You make Midtown amazing. I love it!’” 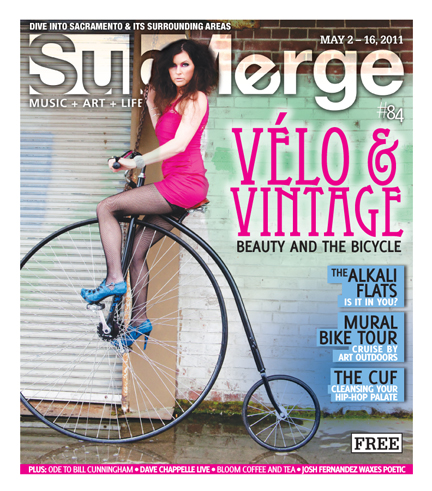 The VÃ©lo and Vintage Fashion Show will take place at Hot Italian on May 7, 2011 at 8:30 p.m. The MC of this year’s event will be Audrey Wells, the proprietor of Fringe, located at 2409 21st Street, Sacramento. For more information on the show, and to sign up for updates, go to VÃ©loandvintage.com.