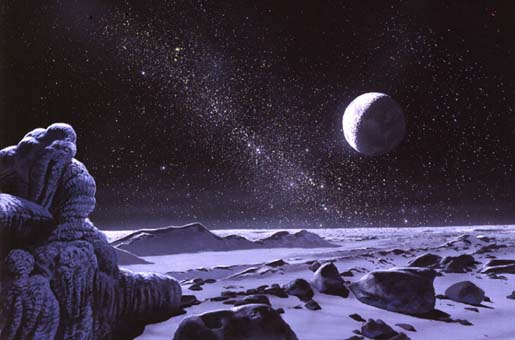 As I write this, it’s mere hours before HBO’s Game of Thrones debuts its season four finale, and nerds (and wannabe nerds) everywhere are suffering anxiety attacks contemplating what is to come of their favorite dwarf, Tyrion Lannister (played by the awesome Peter Dinklage), whose life is currently on the chopping block thanks to one of the most gruesome and disturbing fight scenes I’ve ever seen on television. Thanks HBO for ruining a perfectly good evening. Some things can’t be unseen. Meanwhile, on the other end of the solar system (I mean the whole other end) another dwarf ostracized by its family is once again attracting attention.

When Pluto was nixed from our solar system’s roster of real planets and labeled a “dwarf planet,” I was understandably upset. I mean, back in the third grade, I’d made a diorama of the solar system in a shoebox as my science fair project. I didn’t win, obviously, but I was proud of that janky little thing. I like planets. Who doesn’t? And of course in my expertly crafted diorama, Pluto was included, because back then, that little ball of ice that could was a full card-carrying member of our solar system. You know, now that I think of it, I should’ve won that science fair. I was a fucking genius. Suck it, Public School 53.

But now that the initial hurt of Pluto’s expulsion has waned, I’ve grown to understand that science is a fluid thing. It’s not written in stone. The whole nature of the thing is that its theories have to be tested and withstand those trying their hardest to disprove them. It’s survival of the fittest, and wee, icy Pluto and its irregular orbit just didn’t stand a chance. Poor guy, poor little guy.

I’m sorry, I’m getting choked up.

Dwarf or no dwarf, Pluto is still able to capture people’s imaginations. I mean, just what the hell is it doing all the way out there anyway? It’s like this distant outpost just floating out there in space, the border between our neck of the galactic woods and the rest of the freaking Milky Way. Who knows what Pluto has seen? Alien fly-bys? If you’re a big fan of Coast to Coast with George Noory (shh… don’t tell the government, but I love that shit), you probably think so. The truth is out there.

Back in 2006, NASA sent out its craft New Horizons on an epic mission. It’s currently just more than 300 million miles away and a year’s travel from Pluto. On Father’s Day (June 15, 2014), the spacecraft awoke from a hibernation period that started in January. This awakening is in preparation for its big showdown with Pluto, currently 393 days away.

Among other things, New Horizons will help scientists study whether or not the surface of Pluto’s largest moon Charon is cracked. Scientists theorize that Charon was once home to an underground ocean. According to an article on Thewestsidestory.com, “Cracks on the surface of the moon are very essential for the study as it has the potential of revealing details about these supposed ancient oceans.”

As we’ve learned by living here on this blue marble, water is one of the basic building blocks for life. Though Charon’s temperature, a frigid 380 degrees below zero Fahrenheit, would most like have frozen any ocean it might have had by now, the possibility, I guess, exists that micro-organisms or whatever were once surfing waves on the moon’s ancient oceans. Which is pretty tubular, bro.

It seems that scientists have had a big boner for finding the evidence of water on other planets nowadays. Like, Mars, remember when everyone was all freaking out about the possibility of water on Mars? We even sent my favorite robot on Twitter, the Curiosity Rover, out there to check shit out.

I understand the “cool” factor of thinking there may have been life, or at least the possibility thereof, on other planets in our solar system. It opens up the possibility of life on other planets in other solar systems in other galaxies all over the universe. That’s pretty damn awesome. But really, when you consider how vast the universe is, it’s kind of ridiculous to think we’re the only intelligent beings out there tinkering around on iPhones and being more or less shitty to one another. You don’t have to be a scientist to know that.

So why all this alien water business? Maybe scientists know that we’ve pretty much screwed this pooch of a planet, and we need to start looking elsewhere for places to live if our species is to survive. Maybe in a millennium or so, humans will show up at Pluto’s doorstep with their hats in their hands and be all, look, we’re sorry we kicked you out of the solar system all that time ago. Can we chill on your moon for a bit? Hopefully, Pluto is a lot more forgiving and accepting than we are.