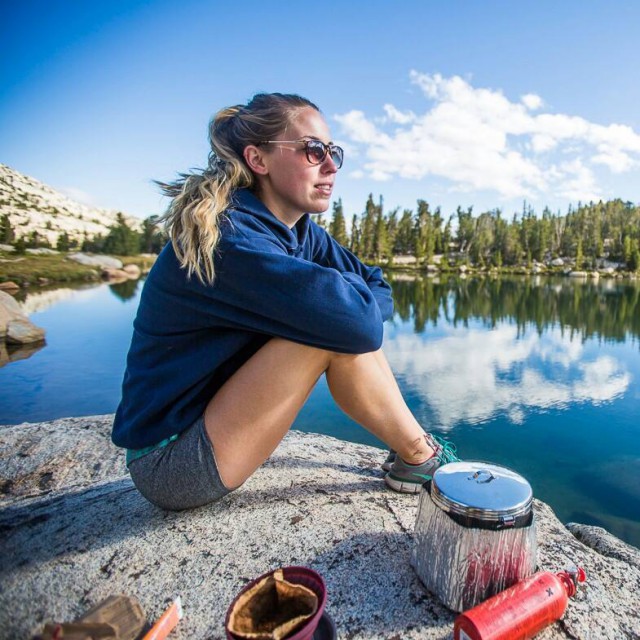 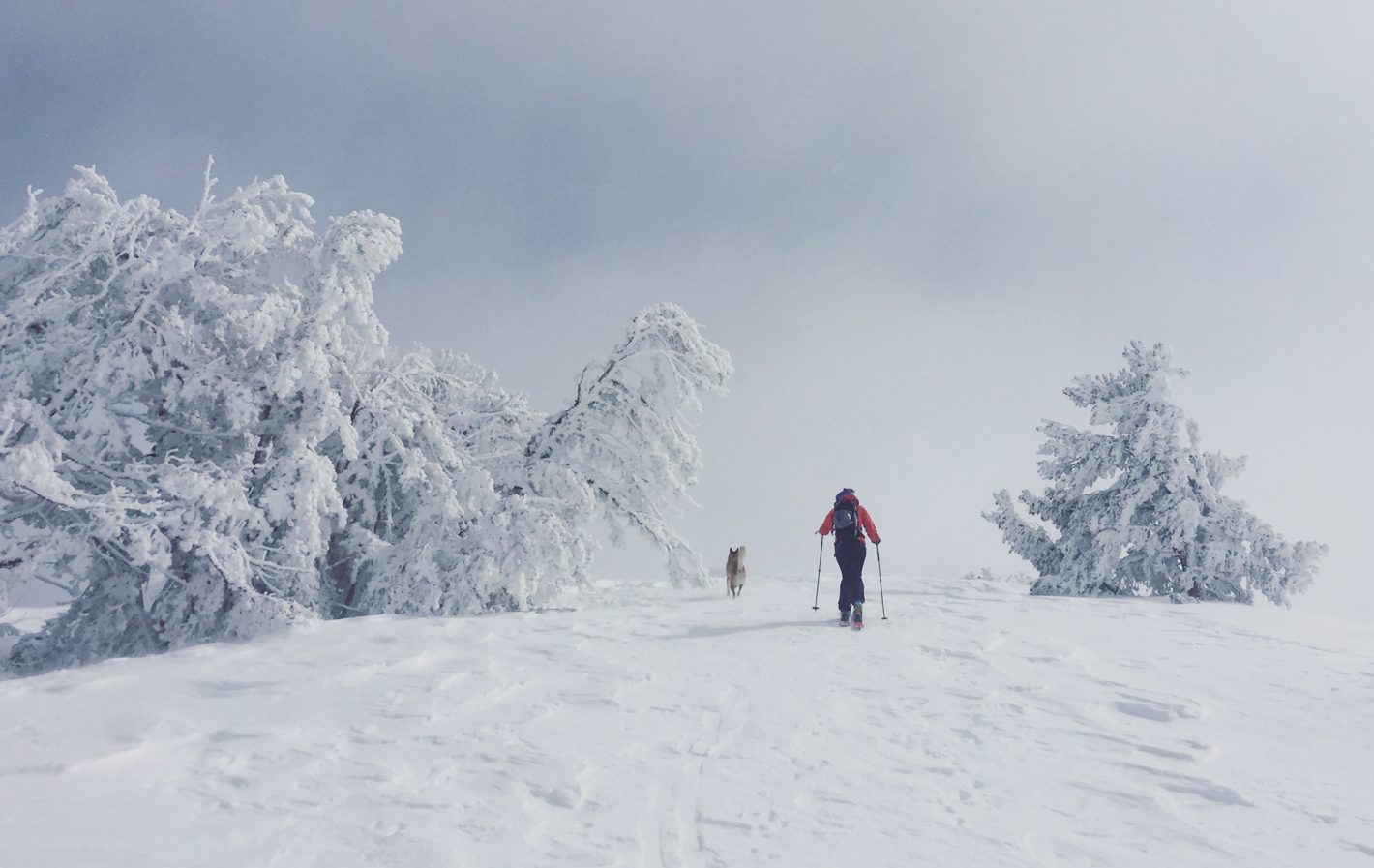 All Photos by Ellen Baker | Above: Katherine V. and her pup, Kaia, making their way up the slope in North Lake Tahoe

Skis lashed to an old backpack on my back, snow shoes strapped to ski boots on my feet, a rock climbing helmet that didn’t allow for proper ski goggle arrangement on my face, non-waterproof pants on my legs and an enthusiastic nearing-30-year-old woman with zero knowledge on how to ski—this all accurately describes my first backcountry ski tour.

“Good effort,” an elderly man mentioned with a grin as I slogged up the mountain. An obvious ski veteran, the man’s comment rejuvenated my confidence after the endless looks of concern I had received from fellow skiers throughout the day prior to him. Although my day began with many-a-lecture from my two friends on backcountry safety (avalanches, snow conditions, weather patterns, avalanche rescue), it should have started at a ski resort.

My confidence as a self proclaimed athlete and rock climber led me to believe I would be proficient at any sport in the elements; if I can spend 17 hours on a limestone big wall in Mexico in near-hurricane weather in the dark of the night, skiing in the backcountry will be a piece of cake! This, my friends, is false confidence. Psychologists call it the Dunning–Kruger effect: People who have low ability or knowledge in something have an illusion that their skill or knowledge is greater than it truly is.

So, Dunning, Kruger and I headed to the mountains. Fortunately, I was with two friends who are well-versed in backcountry skiing who remained patient, informative and supportive throughout the entire day. When I returned home that night, I bought a season pass to Boreal Ski Resort, a fantastic place to start skiing as a beginner.

Boreal has a season pass option in which you take three lessons, be it ski or snowboarding, and after completing all three lessons, you receive a “free” season pass. The lessons and season pass cost around $220, a price you will not find anywhere else in California, or perhaps the entire country. After purchasing the pass, I finished all three lessons within a week-and-a-half. As a freelance writer and photographer, I have the ability to ski during the week rather than the weekend, meaning less crowds and one-on-one ski lessons as opposed to large group lessons. I did take one large group lesson, and it was great to see people my age and older learning a new sport. Once I received my season pass, I skied as often as I could, either alone or with fellow novice skiers. 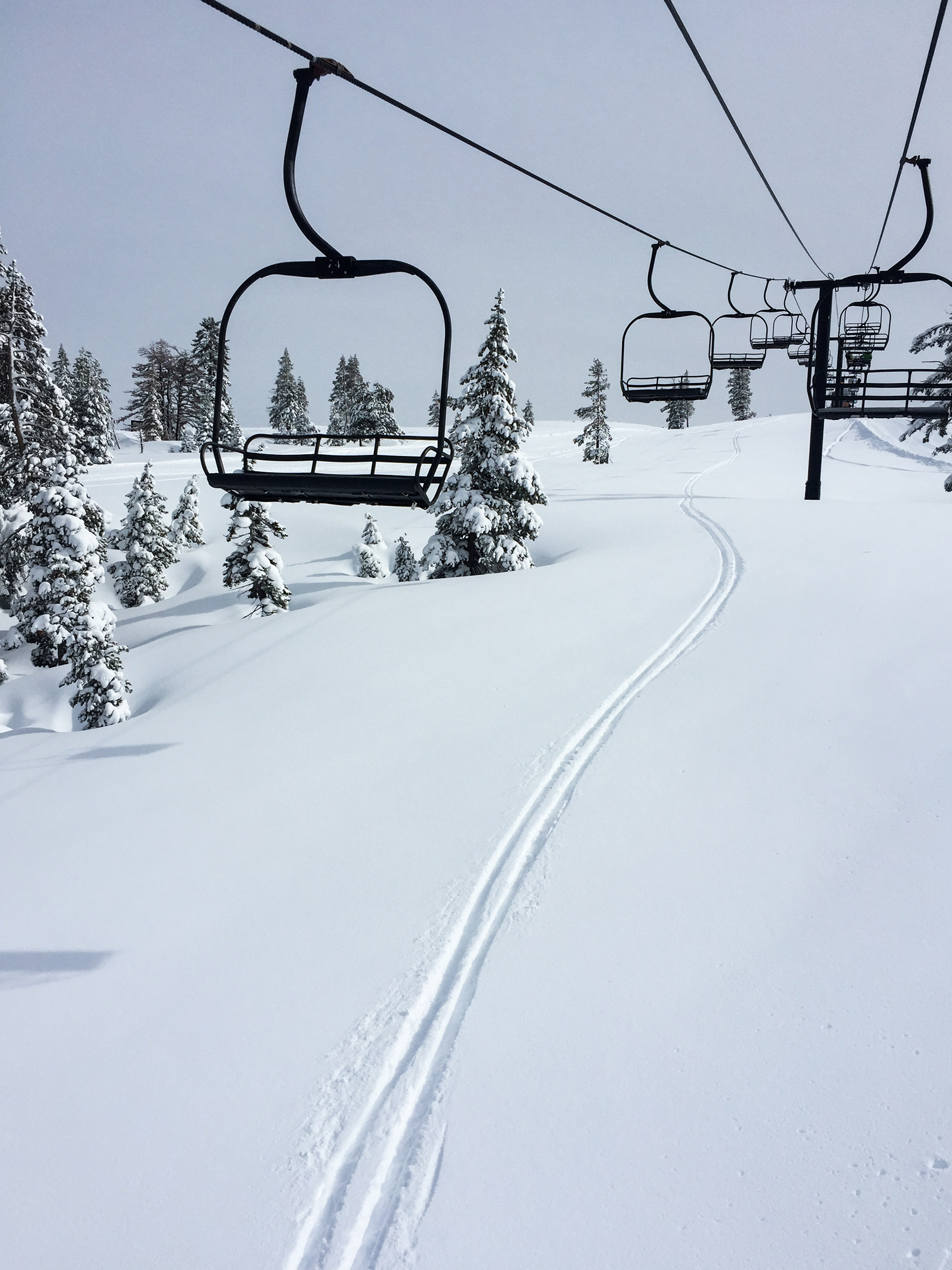 Take away number one: Take lessons.
It’s taken an entire season to feel relatively confident on moderate runs, and I still find myself “in the backseat” sometimes—this refers to leaning too far back and almost immediately losing control of the skis. My ski poles still drag quite often when I feel like I’m going too fast, and every time I arrive at the resort I start on the bunny hill. Dunning-Kruger is still in full effect oftentimes, and I quickly remember that I am still a beginner, and that’s OK.

Take away number two: Being a beginner as an adult is not a bad thing.
My ultimate goal was always to ski in the backcountry. As a climber, being in the wilderness is something I long for; plus, the $600 ski resort passes never really enticed me. I began with far too much confidence and quickly learned that there are legitimate risks in going into the backcountry. I learned that avalanches not only happen in extreme terrain, they can happen in almost all terrain, and becoming an expert in snow science can save your life, or at least allow you to make more informed decisions. I learned that 90 percent of avalanches are triggered by the victim or someone in the victim’s party, and I learned that if caught in an avalanche, you have about 7-15 minutes to get someone out before serious damage or death occurs. So, why the hell would I want to partake in this sport still!? Among various reasons, being in the wild is something I dream of. Gaining the appropriate knowledge before venturing out, though, is vital. It may take years before being proficient enough to head into the backcountry, but I have signed up for an Avalanche Safety Course, I listen to my snow friends when they discuss current weather patterns and I follow all advice my fellow skiers have to offer.

Take away number three: Gain the skills and knowledge before using them.
So if you are in my boots and yearning to learn to ski, try out some lessons, make some friends who know what they are doing, don’t be intimidated by being an older beginner, and as always, adventure on. 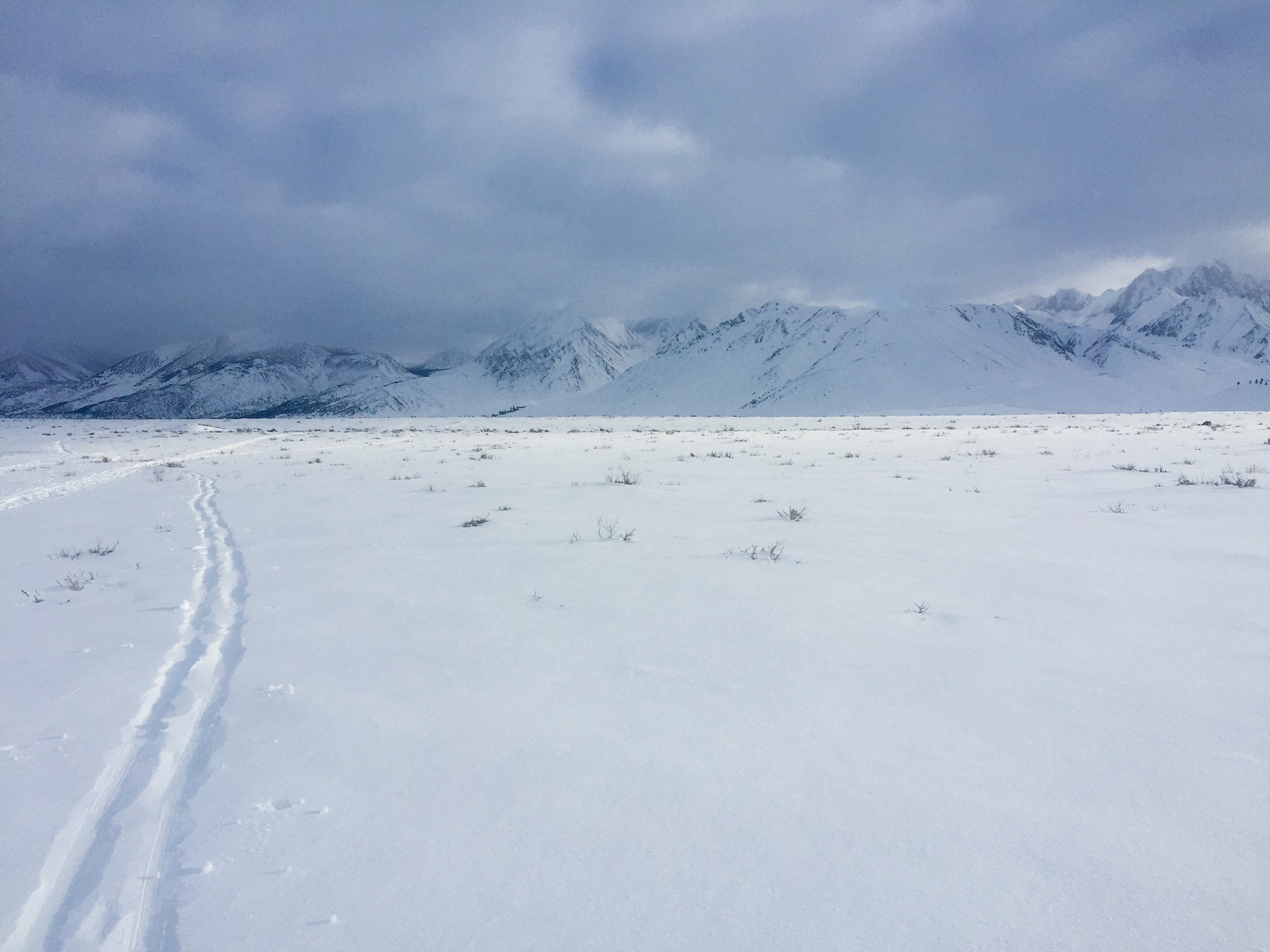 The view of cross-country skiing in the Eastern Sierras