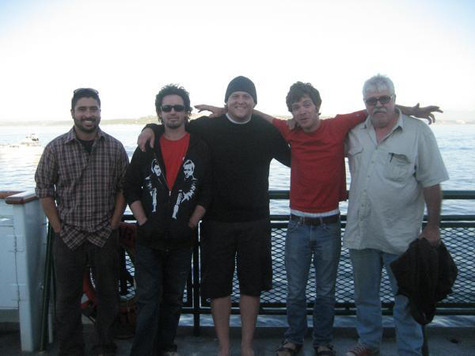 2Me Adapts to Any Situation

Life can undo the best made plans. However, those who stay open-minded are able to shift gears without much problem, and often find a change in direction a breath of fresh air. Sacramento’s ever-morphing folk-rock group 2Me seems to thrive under this ethos.

Here’s one example of 2Me’s willingness to go with the flow: When Submerge spoke with 2Me’s drummer and co-founding member Reid Foster, he was standing outside the Rogue Ale’s Public House in snowy Portland, Ore. He and his band—currently consisting of guitarist/bassist Mark Gonzalez and second founding member, singer/guitarist Christopher Twomey—were slated to play a show in either Oregon or Washingon. We asked Foster if they had the situation sorted out. He responded, “No, we didn’t actually. But we’ve got a friend who plays in a Jerry Garcia cover band, and they’re doing a party here tonight, so we’re just going to hang out with them and sit in between their sets.”

Since forming in August 2003, 2Me has seen many musicians come and go. Twomey and Foster have been the band’s only two consistent members. Foster acknowledges that the many comings and goings have made life in 2Me rather challenging, but it has also kept things interesting.

“I think it keeps it pretty exciting, but it also keeps it challenging for us to—you know, you’ve got people learning the songs here and there, or not learning them and winging it,” he explains. “It’s always like we’ve got to keep on our toes with stuff like that, but it’s really fun. There are a lot of times when we’ll hear something we didn’t think we’d hear, and all of us will get that same glimmer in our eyes when we’re on stage like, ‘Damn, that just happened!’ It’s cool.”
Other than Twomey and Foster, the only other constant for 2Me has been momentum. Foster describes their growing fan base as “an ever-growing community of people who’d maybe just met, or maybe known each other for years.”

This community has a chance to grow even larger this holiday season. 2Me is planning on releasing a new album, Chasing Silhouettes the day after Christmas.

You’ve had a lot of members, but 2Me has always been you and Chris, since the beginning.
Yeah, it’s always been at least Chris and myself. We had a couple of guys who were with us the first three years, and they ended up going their separate ways; ever since then it’s been Chris and myself and who ever else is down to play with us. We had a mandolin player named Ken Burnett, who’s toured with us here and there the past couple years. He’s a pretty regular fixture, but he had to take this weekend off and stay home.

Most bands kind of shut down this time of year, but I saw you guys were squeezing in three dates right before Christmas.
That was kind of a random whim. We’d been talking about when to do it, and we were at the Blue Lamp in Sacramento, and the owner was right there and he said, “How about the day after Christmas? It’ll be a great day and blah blah blah”¦” So we figure it’ll be real great for the people who are in town and real bad for the people who aren’t [laughs].

I’d read in your bio that you guys clocked 30,000 miles last year. So I’d imagine you guys play out a lot.
Yeah, we did most of that in one trip. Well, most of it. It was two big trips, but one really, really retardedly big trip. We were just talking about that with someone last night, and Chris was like, “I’d never want to do that again,” and I was like, “Yeah, well, me neither, but it was good—in its own unique way.”

How long were you on the road in those two trips?
Just under five months for the first chunk, and then just a few weeks for the second chunk.

What was that experience like?
It was intense in a lot of ways. It was pretty excessive most of the time; a little mellow some of the time, but you get to a new town and stay there for a couple of days, and if you’re lucky, you have a family for that couple of days that you’ve never met before. We had some really good hangs like that, just staying with people we knew, friends of friends, or sometimes who we just met that night at the bar we were playing. We made some lifelong friends on that trip. It’s really come back around for us full circle already. It was amazing.

Can you think of a specific case where it has come around for you full circle?
Some people we met at a bar in Mizzoula [Mont.] came up to us between sets. It was just Chris and myself, and we’d never been there before, and it was freezing that night. It was kind of a slow night, and these guys tore into the bar and came up to us and said, “We’re doing shots!” So we took a set break and did some shots, and when we finished, we met with them at the bar around the corner and ended up crashing with them for a couple of days. Two of those people have driven through Sacramento a couple of times and crashed at our house. We just saw them a couple of weeks ago, and it turned out that Gonzo [Mark Gonzalez] knew them in some weird random way. It’s really nuts. It’s ridiculous how the dots have connected on that type of level.

The more you go out in the world, the more you realize how small it really is, I would imagine.
That’s for sure. That is a fact if I’ve ever heard one. 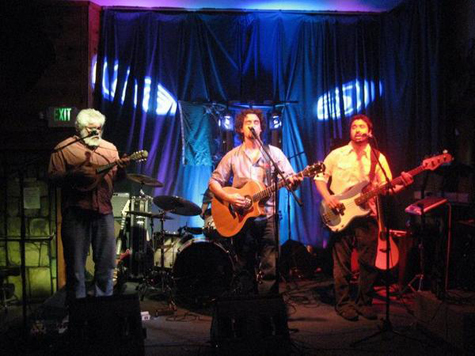 Practically speaking, when you were on the road back in 2007, gas prices were around twice as much as they are now. How were you able to handle that?
We definitely had some conversations lately about how we wished we were doing that [touring the country] right now. It wasn’t even a thing. Gas prices had been going up gradually for the last few years. It was like, “Well these are the gas prices. That’s what we’re going to have to pay if we want to go on tour.”

Now that they’ve come down, do you think you’ll hit the road again?
Well, I don’t think we’re going to hit the road that big—or for that long—any time again soon. We’re trying to pull in the reigns and let ourselves get back home and rest every once and a while. But we’ve got some two- and three-week runs just scattered through 2009—just mapping out where we’re going to be and how long we’re going to be. I think it will be less hectic; the excitement will be jam-packed, but we’ll have some breathers here and there instead of just coasting the entire time.

It sounds like that will be a lot healthier.
I think so—on a lot of levels [laughs].

I know I’m jumping all over the place, but how did you and Chris meet up?
One of his younger brothers was a drinking buddy of mine just out of high school. Chris was kind of like the older brother who played guitar, and we’d see him whenever we saw him, and a lot of times it would be at 4 in the morning when all of us were like 30 beers deep… well, that’s an exaggeration, but, you know, at 4 in the morning. We never really knew each other all that well, but we were out at the bar one night, and he was like, “Let’s start a band,” and sure enough it happened a few weeks later. It happened real naturally, and it’s been quite a trip ever since.

What was it like when you first started playing together? Did you think it was going to go anywhere, or were you just doing it for fun at the time?
It was a little bit of both. I was seeing big from day one, and Chris was seeing big too. He was like, “Woah, it would be crazy if that happened,” and I was more like, “Let’s make it happen!” It’s been really interesting to see how realistic those dreams were in some ways, and how unrealistic the were in others, because we had no idea what we were doing when we first started playing. We always were seeing big, at the very least, and looking at the way things have gone, and it’s been a pretty cool journey.

What were you thinking that turned out to be unrealistic?
I think maybe it was unrealistic, I think we just didn’t collectively know what it took to realize the things that we wanted to be doing. There’s a lot of work that goes into it, and sometimes it takes a while to figure out how to do it—not to mention what that work actually is [laughs].