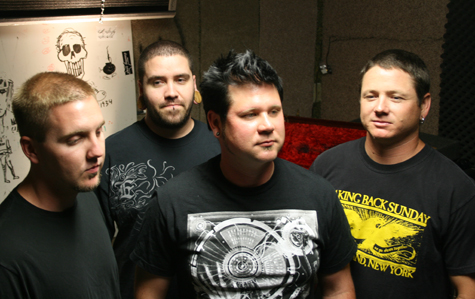 In their almost six-year history, Sacramento’s A Single Second has retained only one of its original members, vocalist/guitarist (he plays trumpet, too) Shawn Peter. While for some bands, this sort of turnover may have been the result of tempestuous relationships, but this doesn’t seem to be the case with A Single Second—at least not according to Peter. It’s just a fact of life: People move on.

“You play with a couple of different people over a couple years,” he explains. “We tour a lot. We play an average of 100 shows a year. Life happens. People want to go off and do other things, and sometimes it’s a good break, sometimes it’s a bad one. But everyone who’s ever been in the band, we’re all still friends. I see them around, and they’re doing other projects. Clay [Wolery, drums], who was in the band the longest with me, left back in November, and we still live together. He’s one of my closest friends.”

Wolery’s last recording with A Single Second, the band’s fourth EP Moments (they also have one full-length) which was available for free at the CD’s release party at the Fire Escape in Citrus Heights on June 21.

“I enjoy going to a show and people are giving stuff out for free, and you’re guaranteed to take one when it’s free, says lead guitarist Aaron Holt of the band’s decision to make the recording available at no charge.

Moments features Mikey Atilano of Ghost in the Flesh and Lesdystics on bass, who has now been replaced by Mogley. Dave Girard, formerly of Drowning Adam, now fills the seat behind the drums vacated by Wolery. Mogley mentions that his transition into A Single Second was pretty seamless.

“I knew who they were, I was familiar with their sound and a lot of the songs they were playing,” he says. “At least I knew they were going somewhere, that they had goals and weren’t trying to start from scratch.”

“There has been some stuff that we weren’t able to do because of the pregnancy and stuff like that,” he says of balancing the disparaging worlds of fatherhood and rock ‘n’ roll. “But since I’d had a child already, I knew what I was able to do and what I wasn’t able to do, so it’s balancing out. My wife deals with it pretty good. She knew what she was getting into when she married me.”

The songs on the EP cover a wide range of topics in just a few songs. On the title track, “Moments,” Peter writes about the death of his grandfather through the eyes of his grandmother, while “Black & White” is a subtle jab at trend-hopping scenesters. Moments’ lone instrumental, “Buddha Fish,” which Peter describes as “a groovy stoner rock song” is actually one of the older songs in A Single Second’s catalog.

“We did record it on our second EP like five years ago,” Peter says. “It was never really that good of a recording. It was always such a cool song. Clay really wanted to record that one, and I think he knew that was going to be his last record, so I think he just wanted something of that song recorded really well before he left.”

With Moments ready to go and a new lineup in place, A Single Second is also readying their second full length that Holt says the band hopes to start recording in August. When Submerge spoke with the group, they were at Girard’s recording studio in Rio Linda “recording some new material so we can get it down better,” according to Peter.

Peter reports that the band has three songs completely finished and ready to go, while three more are done musically, but in need of vocals. He goes on to mention that the songwriting with the new members is going well and is a truly egalitarian process.

“I think Aaron and I are 50/50 as far as writing the music, but we all have our input on it,” Peter says. “It’s not so much my idea or his idea; Dave and Mogley have just as much input. It’s basically whoever has the best idea for a song is what goes, whether it’s instrumentally, vocally, rhythmically. When everyone has input in the song, it just makes it better.”

Peter takes his band member’s input into account even on his lyrics.

“I usually write the words after the music is written,” Peter says. “And then I bring the lyrics to the guys. If they don’t like them, then I change them; if they do, they stay.”

So much for the band Nazi/frontman stereotype. Perhaps that’s why Peter’s been able to remain friends with his band’s past members. This easygoing attitude is also reflected in the way A Single Second handles their business. Though they have a strong following locally and have followed a rigorous west coast touring regimen over the past five-plus years, A Single Second doesn’t seem to be in any rush to get signed to a label—a refreshing outlook, perhaps, in a time when instant gratification is so prevalent. Peter seems to be happy with taking his time.

“We’re not looking at anything big,” he says of A Single Second’s plans for their forthcoming LP. “If an indie label comes up and releases our record and help us distribute and give us some tour support, that would be great. That’s all we’re looking for. You’ve got to take baby steps.”