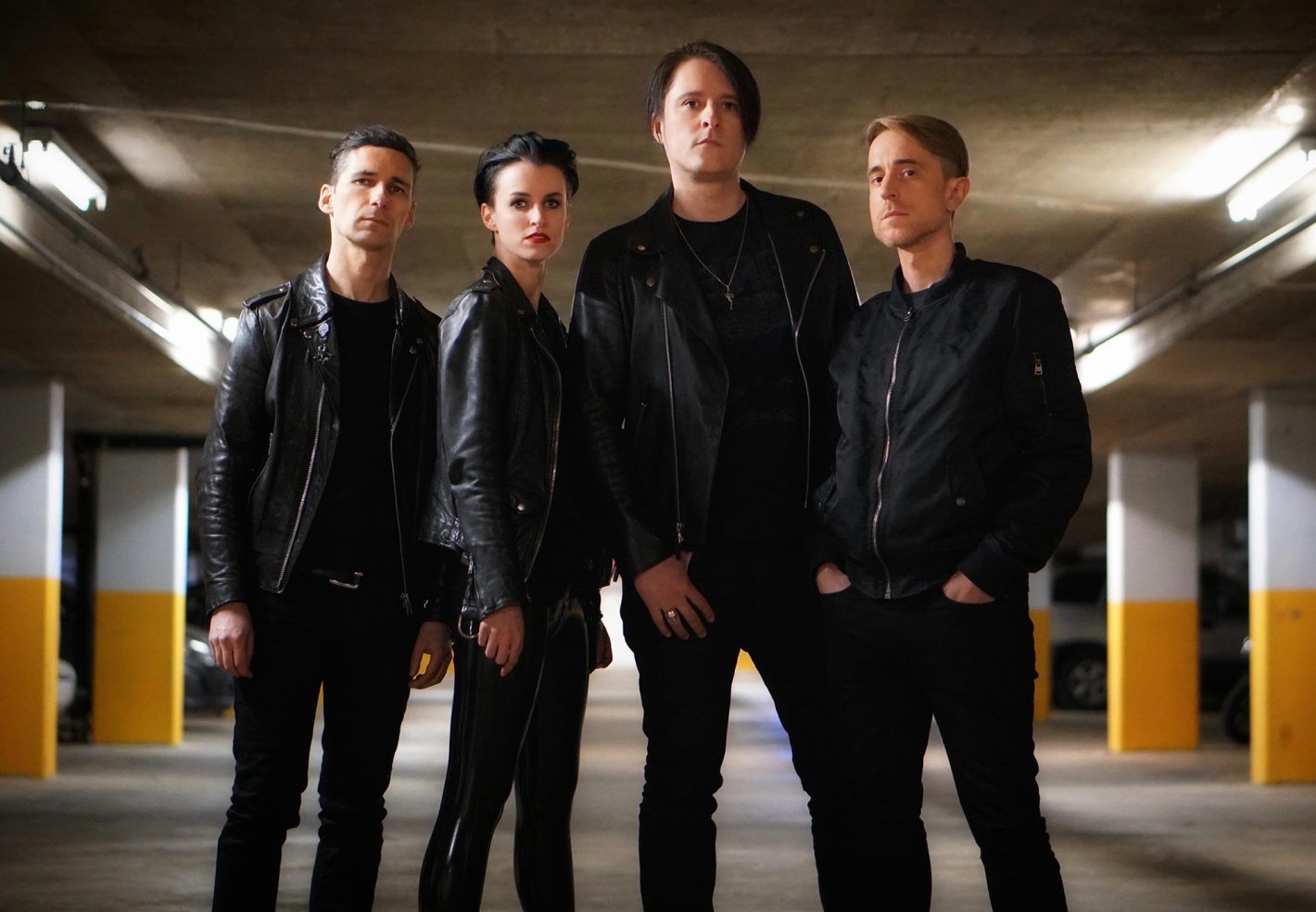 Out of the context in which the original post-punk phenomenon flourished—under the shadow of nuclear Armageddon, stylistically suspended between the snarling nihilism of the original punk scene, the dehumanized dystopias/utopias of industrial and synthpop, the morbid romanticism of goth rock, with a touch of the elegant theatrics of Bowie and Roxy Music thrown in for good measure—the genre has lived many lives. In its current incarnation, it still evokes the ‘80s, but now, as we close out our third decade since the end of the cold war, it’s ceasing to be a wellspring of nostalgia for the recent past, and is evolving once again to become a kind of discipline, a tradition with its own permanent set of identifiers.

Actors, formed in 2012 but making their album debut last year, embodies nearly all of them—stylish, dark, cinematic, stark, retro-futuristic—but have the craft and presence to own them with memorable, hard-hitting, hook-laden songs. This is music to dance to as well as stare to, whether over the dashboard on a 3 a.m. night drive or into the trance-inducing blue light of a poltergeist-infested television. “L’appel du Vide,” the lead in song on 2018’s It Will Come to You, begins with an invitation “into the shadows,” and so begins a tunneling journey through pristinely constructed, urban, nocturnal rock that rarely lets up over 10 tracks.

There is too much focus for these songs to dissolve into nostalgia. They may be dreamlike but always with a sobering chill lingering around the edges. The influences here may be numerous, but are tastefully blended—the razor-tinged guitar work of Killing Joke; the mournful, mellow vocals of Peter Murphy, even some of the mythic synth swaths of Vangelis on closing track “Bird in Hand” seem to rise like hints of smoke from the mix.

The eras and figures that Actors echo in their performance were themselves committed to reviving bygone, romantic modes of theatricality and wedding them to an uncertain, automated future. The best of them were endless tinkerers who could exude an image of raw expression while maintaining a keen eye on what made certain elements work more smoothly than others. On near-flawless tracks like “Hit to the Head” and “We Don’t Have to Dance,” producer/singer/guitarist Jason Corbett seems to master both the art and science of this genre, with little in the way of extraneity. With no more than the correct amount of details, the mind can construct its own palaces.

We had the chance to drop in with Corbett for a tastefully brief rundown on style and method.

First of all, let’s get into etymology. Actors is a nice, sharp-sounding, stark name for a band of this nature, but it also makes me think of the way actors use performance as a way to connect with, or manipulate the audience. The same talents by which the actor possesses the audience’s attention and emotions can also have an isolating side-effect on the performer, and on top of that, isolation seems to be a key thematic hallmark of post-punk. Do you find this relevant to the way you create? If so, how do you approach the enigmas of isolation, connection and emotional guises as a part of your music?
I think the name leaves things open ended enough for the listener to connect with the music first. I get excited about emotional connection. These songs aren’t about posturing or pandering to any audience and I like to think that’s why this album is resonating with people.

Did it take awhile for the name of the group to come, or did it arrive automatically/subconsciously? Why was it this particular word, in your thinking?
My friend suggested it. It made sense to me right away and sparked something in my imagination. No boundaries. It’s not genre specific.

I can see some of those themes of isolation/performance in the video for “We Don’t Have to Dance.” How would you explain the themes of that video, and what it has to say about the band?
That video was made by my partner Kira Clavell. She asked me to trust her to come up with a treatment. I had no idea what she was going to do. I couldn’t be happier with the way it turned out. She nailed it. We lean toward that darkness.

You also do some composing for short films and television. How did that come about?
That’s all about friendships. I’ve been lucky enough to know creative people in different fields like film and television. Even though I really do enjoy that kind of work, it wasn’t something I actively sought out.

How does your work with Actors affect doing scores and vice versa?
Staying in a creative mode and trying to find new ways of expression with music feeds both facets. It’s nice to have both outlets. I’m always learning and trying to grow.

If, say, It Will Come to You was the score for a film, how do you think it would go? What would it be about?
I have no idea. I would like to leave that to David Lynch.

Being a long-time fiend of this sort of music myself, sometimes I have trouble pinpointing its psychological allure. How would you explain it?
That’s a good question. I really don’t know. I know for me it’s the darkness. Celebrating that darkness somehow.

As a self-described child of the ‘80s, is it nostalgia for you or something more? How would you explain its continued freshness and appeal to people who weren’t alive in the ‘80s?
It’s not nostalgia for me. I don’t think of us as rehashing music from the ‘80s. There’s elements of that for sure, but sonically we are influenced from more contemporary genres as well. I write what I want to hear and what comes honestly. Good music is good music, and the ‘80s was full of it.

Having visited Vancouver a few times, there’s a certain energy—maybe it’s the mixture of old and new high-rise apartments juxtaposed with the looming forests/mountains with the sea nearby—something that makes it both moody and dramatic. Then on top of that, the legacy of bands like Skinny Puppy, Front Line Assembly, cold but theatrical. Did this atmosphere have an effect on your musical upbringing at all? Even if it didn’t, can you pinpoint a time growing up when the music of your current style first started having an effect on you?
I don’t think my location influenced my music. I was exposed to David Bowie and Roxy Music at a very young age and I was around 10 when music videos were all over TV. I never listened to just one style but from the beginning I related to the more melancholy.

Your history in other bands and wildly different styles goes back a ways. Compared to all the precedents, what is the major difference with Actors and what makes it particularly special to you?
This is the music I wish I was always making. I just didn’t know how to tap into it until fairly recently. And I don’t think I could have done it at any other point in my career—It took me a long time to find my voice as an artist.

What do you want to push out in your recordings and performances with this group and how does it allow you to do that?
We’re just playing music we like and we love playing together. Luckily we’re able to do that in venues around the world now.