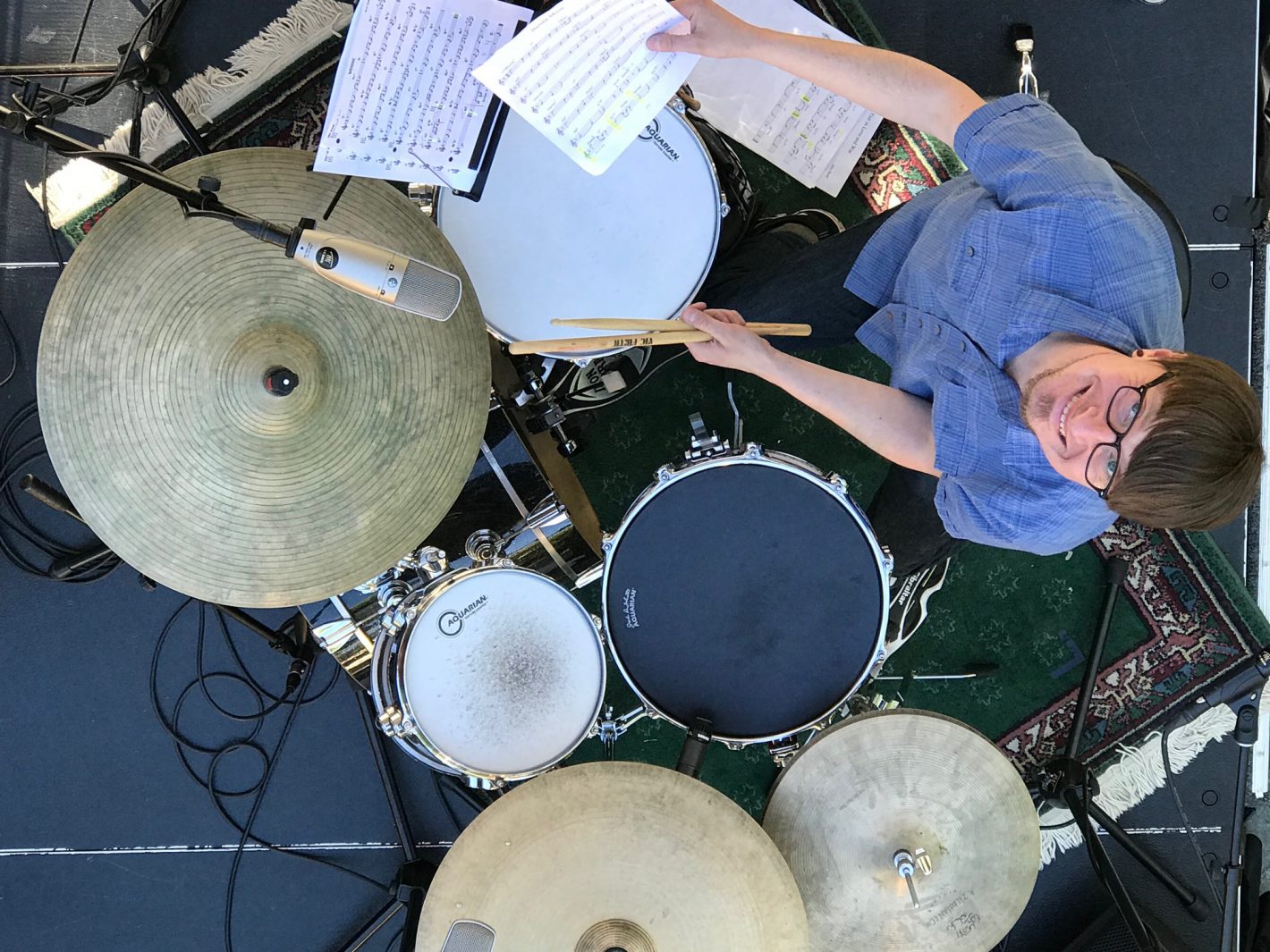 You feel calm around Alex Jenkins. Despite the ambient hum of conversation and coffee grinding at Old Soul on a Saturday afternoon, it’s easy to talk to him. We start simply with family life, politics and weekend plans, and he points out the obvious—that he’s older (43) than he looks and talks of the accomplishments of his three grown children, one of whom is leaving for a second tour in Afghanistan.

His conversations are rhythmic. He’s good at tying beginnings and endings together and seeing the bigger picture. Perhaps that’s why Jenkins, a drummer since his early teens and founder of a few different Sacramento-based jazz ensembles, has been teaching percussion for more than a decade. He also gets asked to come back year after year—now for the 15th year—to teach drums at local elementary schools William Land and Howe Avenue.

The impact of tying music with education is evident in Jenkins’s history and experiences. It’s how he met his wife—she was a mom, he was her daughter’s drum teacher. It’s how, after a class with Sacramento State percussion instructor Daniel Kennedy, Jenkins chose to pursue the tabla. And it’s how he bridges the communities within which he works in Sacramento.

“At the elementary schools, I’m able to teach everything from rock ‘n’ roll to Arabic and African rhythms on hand drums. I spent two summers in a row studying in the Caribbean so I also teach Caribbean rhythms,” Jenkins says. “One of the classes I teach is a drum class for refugees. At Howe Avenue there is a huge refugee population. I have students from Iran, Iraq, Afghanistan, India and Pakistan who are now living in this country with their parents and a lot of them don’t speak much English, but you don’t need it in drum class. You don’t need to speak the same language to share that.”

Jenkins reminisces about his own childhood experiences learning instruments, and understands the importance music can have in a young person’s life, especially in a time of change and transition.

Jenkins attended Sacramento High in the late 1980s and early ‘90s when it was also an arts magnet school. (Another drummer who went through the same Sac High program: former Cake member Todd Roper). At this time, Jenkins started becoming familiar with the drumming of Elvin Jones, who played in the John Coltrane Quartet in the ‘60s and was dubbed “World’s Greatest Rhythmic Drummer” by Life Magazine.

“I was most drawn to the records he played on with John Coltrane,” Jenkins says of Jones. “There’s something about Elvin’s sound that touches me on a deep, spiritual level. His sense of time and syncopation, as well as his mallet work on the drum set, is something that has been a huge influence on me. He’s definitely someone who I’m constantly listening to and trying to figure out. I think it’s important to listen to those who’ve come before us in order to develop and evolve music and take it to the next level.”

During his time in high school, Jenkins participated in marching band and jazz band, and traveled nationally and internationally for shows and competitions, something that seems more difficult to do today unless personal budgets and philanthropic donations allow.

Jenkins credits Howe Avenue music teacher Gail Winnie (two-time Teacher of the Year winner) for creating a program that is funded with outside sources and brings in visiting musical artists from far and wide to teach students. The outside support and interest from the principal, he adds, also helps keep the after school enrichment program running at William Land.

Jenkins says Winnie keeps him around because of his skills and understanding of global percussion instruments, which he picked up through his travels.

“The first instrument I was drawn to other than the drum set was tabla,” Jenkins says. “Around 23 or 24 I had come to a crossroads in my life. I didn’t want to continue school, so I decided, why not go to India and see if I can track down this drummer I liked?”

Jenkins spent time studying tabla in India, came back and took the class with Kennedy, then studied at the Ali Akbar College of Music in San Rafael for five years. Along the way he’s also been drawn to Afro-Cuban and djembe, adding it to his repertoire after additional years of study.

“One of the things that over the years has become a niche for me is to play in different styles, like to take rhythmic styles from tabla and put it on the drum set,” Jenkins says. “It’s very fulfilling for me to cross-pollinate these different rhythmic ideas from different traditions and put them to one sound.”

Jenkins notes that it took baby steps and continued experimentation to blend traditional sounds from various cultures to see what worked, especially when considering his ensembles and audiences.

“I don’t do it blatantly; instead, I try to do it so that it’s very subtle or understated most of the time,” he says. “As far as how I got into it, at Ali Akbar there are a lot of students fusing Indian melody and rhythm into instruments that they play. They are studying Indian music, but they were not born or raised there; they are Western musicians trying to add something to their repertoire. People have been doing that for a long time—that’s how different music traditions are created. But certainly, it has given me a recognizable sound, and if you talk to any musician, that’s their goal: to have their own sound and be able to draw from it and develop.”

Sacramento has been hearing Jenkins develop his jazz sound for more than a decade with his ensemble residency at The Shady Lady every first and third Sunday, a model he says other venues are mimicking because of its success.

“In jazz and creative music, there is a renaissance happening here in Sacramento,” Jenkins says. “There have been really hard working jazz musicians working really hard to create opportunities here. There are probably more places to hear and play jazz here today than I can remember.”

The next big step for Jenkins will be his first live audio and video album recording, open to the public ($10 students, $20 general) and happening at the Clara Auditorium June 10 at 7 p.m.

The Alex Jenkins Quartet will play both originals and covers. The quartet includes Arlyn Anderson on guitar, Levi Saelua on sax, and Alex Reiff on bass, all from Sacramento.

“This is something I’ve always wanted to do and this quartet, I’m really proud of the songs we’ve written and the vibe we have,” Jenkins says of the live recording event. “They are not only great musicians but great friends and that really comes out in the music. When we started working on originals, I said, ‘Why haven’t we been doing this from the beginning?’”

In 2016-17, the quartet did a series of concerts with a “jazz for movies” theme. Some of that music will also be part of the show (think everything from The Hobbit to Charlie Chaplin).

Check out the Alex Jenkins Quartet live at the Clara Auditorium (1425 24th St., Sacramento) Sunday, June 10 at 7 p.m. Tickets are $10 for students and $20 for the general public. To learn more about private lessons for all ages, upcoming shows, and summer music programs with Jenkins, visit Alexdrums.net.