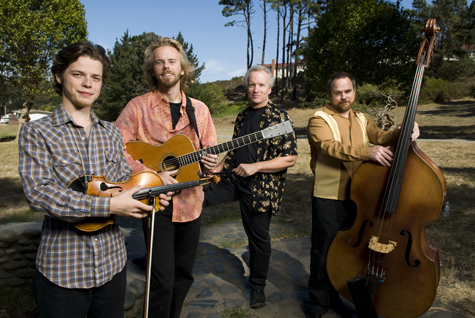 San Francisco-based roots rock group The Waybacks took a step forward with their latest release. Due out in late March on Compass Records, Loaded, will be the band’s first release to feature all original material. The album was recorded on the hallowed musical grounds of Nashville, TN–the city in which frontman James Nash was raised, with producer Byron House. In anticipation of Loaded‘s release, Submerge spoke with Nash from his San Francisco home where he was preparing for a stint on the road that will take The Waybacks through western Canada.

You were raised in Nashville. How long have you been living in San Francisco?
I’ve been out here for a while. I moved out to the Bay Area in 1991.

Do you go back to Nashville often?
We go there to play some now. Our official record release date I think is the Nashville show in a couple of weeks. I used to spend more time going back there when my parents lived in Nashville, but they don’t live there anymore. I don’t visit as much, but Nashville is a great town—a great music town, obviously—and our record label is based there. We did our last album in Nashville.

I saw that the producer [Byron House] is from Nashville also.
Yeah, he’s not just from Nashville, he’s like one of the A-list studio players there. He knows everyone in town, and that’s one of the main reasons we recorded there, because it felt like it was good to have someone who knew the town, and all the players. Every now and then we thought, “It’d be cool to have accordion on this song,” and he was like, “Oh, well, I’ll have someone in here tomorrow morning.” He knew all the cats in town.

I would imagine that there must be a lot of amazing musicians down there that most people don’t know about.
Oh, it’s unbelievable. The old Loving Spoonfuls song is definitely true about—I forgot the number—but there are 1,852 guitar pickers in Nashville, and all of them pick it better than I will. It seems like everyone plays guitar in Nashville, but there are a whole lot of other styles and different instruments, of course.

Did you get to work with anyone you were taken back by?
One big thrill on this record was getting Sam Bush to come in and play on a track [“Loaded”]. We were psyched to have him on the record, but what was really cool was that we didn’t just get him to come in to overdub a solo on the song, we actually had him track the basic song with us, which made a big difference. It’s always cool to have a star come in and overdub a little lead part on your song, but to actually have someone of Sam’s caliber come in and play the song with us really changed the way we approached it. Not just his part. Everyone adapted what they were doing to fit what he was doing. He’s the kind of guy that if he’s in the room, or if he’s on the stage, everything sounds different. It was really cool to inject that kind of energy into what we were doing.

This is the first album you did without any covers, is that correct?
Yeah, I think that’s right.

Was that your intent when you went into the studio?
We had a real productive period with the writing over the last year. It just kind of worked out that way. This record was done more, as far as the material when we went into the studio on day one than any album we’ve done before. We had 15 songs that we wanted to record, so we needed help with Byron to see which ones would get the axe on this particular record.

We kicked around a couple of cover ideas, but an album can only be so long, and we sort of felt like, “Well, to do a cover, we’re going to have to boot off one of these original tunes, and which ones are we going to cut?” I’m really excited about that, honestly, because it’s a strong new direction the band is taking, where we really are basing our sound entirely on new, original material.

Covers can be cool if they’re done the right way, but they can kind of become a crutch of a band, I think. It feels really nice that, hey, we’re going out on stage every night, and we’re not relying on people—in some cases—knowing our songs. There’s a whole different feeling that you get getting out in front of an audience and playing songs where they don’t know most of them. That’s what it feels like right now, and it’s not easy to sell people on stuff that isn’t familiar, so I think in some ways it makes us play a little harder and sell the material, because it’s like, “These people don’t know the stuff, so we got to go out there and really give them something.”

You mentioned that you were going through a very productive period. Do you have any insight as to why that might be?
I think both Warren [Hood, guitar] and I had a lot to say last year, and that feels really good. I wish I had the answer to how to do that, because then I’d be productive all the time. It’s funny, sometimes you sit down—one way I like to illustrate it is that I’ve been playing guitar all my life, so if I sit down and strum a D chord, I know what it’s going to sound like before I hear it because I’ve heard it a thousand times. Most of the time, when I sit down and strum a D chord, it just sounds like a D chord, but on a good day, I sit down and strum a D chord and it sounds like the first note in a song. I can’t explain why that is, but just sometimes you sit down and play your instrument, or you sit down without playing an instrument, and you hear something that suddenly sounds new, whereas I feel like the sad thing about music is that most of the time it all sounds like something you’ve heard before and that’s why musicians are always listening to other bands because they’re looking for something new. Most of what I play sounds boring to me, but then every now and then it’s like, “Oh wow, that’s new. That’s great,” and then I stay up all night and write a song, and I’m a happy guy.