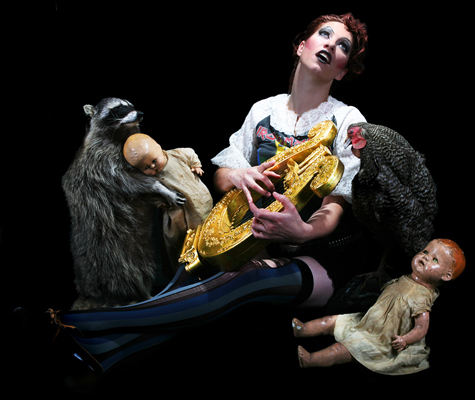 Singer/songwriter Amanda Palmer sits in the City Bakery Café in Asheville, N.C, hoping “many coffee drinks” will energize her after a tough day. She and the rest of her crew are planning the night’s on-stage festivities. “I was thinking about canceling our entire set and telling all the actors to take the night off so that I could play every breakup song I’d ever written,” she says with a laugh, unwilling to elaborate on what transpired the day before.

However Palmer decides to thrill her Asheville faithful, her fans should know to expect the unexpected. Far from conventional, Palmer’s tour doesn’t only include a band of musicians, but also a troupe of actors—Australia natives The Danger Ensemble, who perform live theater along with the music. Palmer calls them “impossible to explain and majestic to behold.” She recognizes that live theater isn’t usual rock show fare, but she says, “That’s exactly the point.” Making a name for herself as one-half of parlor-pop duo The Dresden Dolls, Palmer recently went solo, releasing her debut album, Who Killed Amanda Palmer (Roadrunner Records), on Sept. 16. Palmer planned to release a simple album—focusing mainly on her voice and piano—but a fan letter from Ben Folds changed everything. In his letter to Palmer and Dresden Dolls cohort Brian Viglione, Folds wrote, “you’ve now made two of my favorite records ever. Thank you Thank you. Both of you.” From the letter Folds and Palmer forged a relationship that led to him producing Who Killed Amanda Palmer. “When Ben came on to produce, I threw all my ideas of simplicity out the window—as did he,” Palmer says. “It just raised the bar and notched the project up to a totally different level.”

Palmer welcomed the change in direction. “I’m not very resistant to randomness coming into my life,” she explains. “In fact, I think I might follow random impulses to a fault. As soon as stuff started happening with Ben, I just completely erased my brain and said, ‘This album is going to be whatever it is, and let’s go.'”

Folds’ influence is apparent. Who Killed Amanda Palmer has a grand pop sound, almost on the level of a Broadway musical, which wouldn’t be a stretch considering Palmer’s theater background. However, she says the album doesn’t have an overall theme, at least not intentionally. “You could look at my entire life as a musical,” Palmer jokes. In the following interview, Palmer sheds more light on her relationship with her fans and how she believes her collaboration with Ben Folds will affect her future releases.

It certainly seems like serendipity that you and Ben Folds met and got working together. When he originally e-mailed you, what was your reaction?
I just felt incredibly flattered. When another musician—especially one as talented as Ben Folds—writes you a fan letter, you get to have one of those wonderful moments in your life when you stop and go, “OK, I’ve done something right.” Compliments like that coming from other songwriters are just worth their weight in gold. It’s one thing when it comes from your mom, or your fans, but it’s another thing when it comes from your peers.

Is it validating?
I think my whole career and my whole journey with Brian and the band, and now this, has just been one constant baby-step-by-baby-step staircase into the vague idea of validation. We’re one of those bands that never, quote-unquote, made it big overnight. We toured constantly, we worked from the ground up, and we never had one major break. We just kept gathering fans, door to door, basically. Yesterday, I just wrote a long letter to our fans, because we’d been having some mail-order problems; stuff in the industry is really screwed up, and it had just been a while since I’d reached out to them. You know, watching what’s going on in the music industry, and what’s going on with other bands, and CD sales tanking, and ticket sales plummeting because of the economy, I have never felt more lucky and grateful to have been in this kind of band, because we have the kind of fan base that is impervious to flux. Because they’re real. Now that I’ve been doing this for enough years, I’ve watched a couple of bands come and go, and there’s always that little twinge of jealousy, like, this band comes along, and they have a lot of energy and all of a sudden, they’re on MTV and in Rolling Stone. But then they disappear two years later, and you’re like, “Where are their fans?” And then you realize that their fan base is fickle. So, even though Brian and I have never reached those huge, mainstream, stratospheric heights, we have something that’s so strong, I feel like I wouldn’t trade it for the world. That’s the most validating thing—that what we’ve got is solid, and it won’t go away. “¨

You mentioned Ben Folds’ influence on the album’s sound, but I’d read that he was also an influence on the song selection. Your bio states that you’d tried to veto the inclusion of “Runs in the Family,” but he convinced you to put it on the record. Why didn’t you want to include that song at first?
I just felt that it was too immature. I wrote it when I was 22 or 23, and it just felt like too representative of young Amanda, and I wanted this record to be shiny new mature Amanda. That one was definitely, “Oh no…” It was one of those teenage, angst-y songs. But Ben convinced me that it wouldn’t come across so much that way. I think he was right. I made a few tweaks to it, and his production on it blew my mind. I don’t regret that at all.

Was it embarrassing for you to revisit those old feelings?
Yes and no. Sure, it’s always a little weird to delve back into old stuff, but the old stuff that’s truly embarrassing, I don’t even air out. It’s in an air-tight box—deep, deep under my bed. The stuff that sort of still kicks around—there’s stuff that I wrote when I was 18 or 19 that I still think about, and I’m like, “There might be something in there. I might drag it out.” There’s a quality of—I don’t know what you’d call it—like an homage you pay to your younger self. All emotions are valid. The emotions you had at 17 are no less real than the ones you’re having at 32. You’re just approaching them from a different place. There’s something about digging up that old stuff that can sometimes be kind of invigorating, because you’ve gotten over it, and you’ve worked through it, and you’ve come to terms with it, maybe, but that doesn’t mean you can’t access it.

I think that’s a really key ingredient in being a songwriter or a performer, period, is that you need to be able to access. When you’re performing, you need to be able to access everything. You need to be able to access—over the course of a night, if you’re playing 15 different songs that came from 15 different places, if you can’t genuinely access that stuff and you’re just going through the motions, then you’re ripping off your audience. It’s sort of the same way when you’re selecting songs. How far are you willing to let yourself go in a certain direction; how much old stuff are you willing to dredge up; how honest are you willing to be about how you are now compared to how you used to be? They’re all interesting questions. I definitely feel that I did a lot of delving on this record, and for my next record, I’d really love to break new ground and start from scratch, because I’ve never done that before. All the records that I’ve made have all sort of been greatest hits collections [laughs], and I’d really love to sit down and just say, “OK, right now, what’s really going on in there,” and make a quick and dirty kind of record.

What do you think you’ll be able to take from this project that you’ll apply to future Dresden Doll releases?
One thing for sure is that I was really able to give up a lot of control in the making of this record; and ironically, I’ve never had more control, simultaneously. I feel like I got a really extended education about decision-making, from the really minute stuff to the big-picture stuff. Everything I did on the solo record had extra helpings of perspective on the Dresden Dolls and my relationship with Brian. I think all of our projects away from each other do. Any time you work so closely with someone for eight years, and then you start wandering off and doing other projects, you can’t help but hold that mirror up to that relationship. The pros and cons of my relationship with Brian have never been more stark. If nothing else, I’m really glad to get that perspective. I think we needed it really badly, because we were just up in each other’s faces nonstop for years, and it’s really hard to fix and appreciate and cherish what you’ve got until you can step back and see it for what it is. I know, deeply, that my musical connection with Brian is a one-time deal. Something like that isn’t necessarily going to come around again.

Does working on the solo project energize you to go back and work with Brian again?
It certainly made me wiser in regards to any collaboration. The more you work with people, the more you get what it’s like to work with people. It doesn’t matter who they are. My whole life recently has been a really strong indicator that talking less and listening more is always good, and not making snap decisions is always good. It’s nice. I feel like I’m mellowing into my forays into music making. No decisions are life-and-death any more. I think once you’ve made three records you also feel like you have the latitude to do that”¦Once you’ve made your mark and said what you’ve wanted to say, you can get less precious about your style. I’m excited about that. 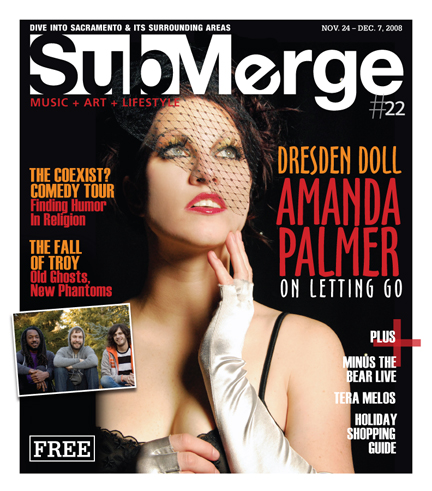