Another Damn Disappointment Speaks Out

Relentless About the Music

Forget about your one-hit wonders and starry-eyed kids just breaking into the music scene. Despite a lack of local publicity, Another Damn Disappointment has been a staple of the Sacramento music scene for a good 10 years and has a lot to show for it.

“We’ve done rad shit,” says singer and songwriter Josh Thompson. “Our shit was on MTV’s The Real World, in the background. I’ve been driving through other states and heard our stuff on the radio. But in Sacramento, we’ve had zero recognition.”

This lack of love from their hometown is partially responsible for their name, Another Damn Disappointment, a name which was chosen midway through the band’s career. In the early years, the band was known simply as ADD, an apt name considering two of the members of the band actually had Attention Deficit Disorder, and that their musical style was “punk-rock fast,” as bass player Casey Marsullo says.

The name Another Damn Disappointment was added later, when a record label prodded them for a more distinctive name. Considering the band’s dissatisfaction with the Sacramento music scene, this name is equally appropriate. “We have a great fan base here and a big following, but no one really sticks [up] for us. We’re on the radio all the time and KWOD has always been really nice to us, but as far as anything else goes, this city I don’t think supports its bands,” Thompson explains.

But ADD didn’t let this get them down. They started playing in Los Angeles, and found the crowd to be much more receptive to punk rock music. They’ve played all across the United States and Canada, including two summers of playing on Vans Warped Tour, a CD release show with Pennywise on Catalina Island and a show at House of Blues, Anaheim. “We’ve toured our asses off: Vancouver, Seattle, Portland, New York, Kansas, Florida, pretty much every major city you can think of,” says Marsullo.

In Sacramento, their hearts still go out to The Boardwalk, which is where they played their first show. “The first year we played there almost once a month and just packed it in,” Marsullo says. “That’s how we built up a reputation with promoters. [They were] like, God, ADD packs it in there! Where did this band come from?”

In the beginning, ADD was just a bunch of punk kids who wanted to be part of the music scene. “After years of going to punk rock shows and getting beat up in the mosh pit, one day I was thinking that it would be kind of cool to be the guy onstage looking down on that instead of the guy in it,” Marsullo remembers. They got together with some buddies at Folsom High, including current guitarist Ross Standley, and started playing, and it was crap. Thompson says, “We were so into punk and living that lifestyle for so long that it didn’t even matter that we sucked. We had the desire to play punk music so much that it was overwhelming everything else.”

Luckily, the talent came with time. And just as the music grew and changed, so did the band members. In 2007, they added a second guitarist, Aaron Welch, who had been a fan of the band for quite a while. Thompson remembers that when Welch came to try out for the part of rhythm guitarist, he blew them away with his talent, he knew all of the songs, even the solos. It turned out that Welch had a degree in music, knew how to record and even listened to all of the same music. “It was a perfect fit,” Thomspon says.

ADD has been through their share of drummers before current drummer Carl Chang joined a couple of months ago, and every drummer has been better than the last. “It’s like the missing piece that needed to be there,” Thompson says about Chang. “[He is] the epitome of a bad-ass drummer.”

Thompson writes all the lyrics, usually while drinking a lot of coffee and taking some Adderall, he says. “Usually I will try to do a couple about society or politics, whatever bullshit is going on,” says Thompson. “And then there’s always the woman in my life that’s fucking me up. I’ll probably write a few about that. Standard punk rock.” And of course, a few songs are dedicated to going out and getting drunk.

Their first album, Quarter Life Crisis, was self-produced and came out in 2000. They describe this album as being “pop-y punk.” Next, they released Hooligan through Volcom Entertainment, which was a little more aggressive and dark than their first. Their new album will be released through Felony Records, and they describe it as being more “metal-punk.” It is called Relentless, which pretty much describes the attitude of the band. Thompson says, “Through all the trials and tribulations, whatever bullshit that has gone down, [we are] relentlessly playing.” The cover art illustrates this idea. Thompson describes it as, “an old fifties style bomber plane being shot and going down in smoke but still firing its guns, not stopping until it’s dead.”

Their sound has changed a lot since the band’s formation, continuing to move away from traditional punk music into a darker and more mature sound. Thompson explains, “The band’s talent level kept on getting better, so the music is just adapting. We can do so many more things now, especially with Aaron being on board with the second guitar.”

Although Relentless hasn’t even been officially released, they are already hard at work on their next album, and have four songs written. Thompson and Marsullo agree that this next album will be, overall, just the next step in their musical talents, heavier and more intricate. “[There are] more interesting things going on rather than your standard four-chord punk rock song,” Thompson says.

Goals for the near future? “I’d like to see this record really take off,” Thompson says. “It’s the first CD that we’ve done that I’m actually really proud of and I’m fully backing.” 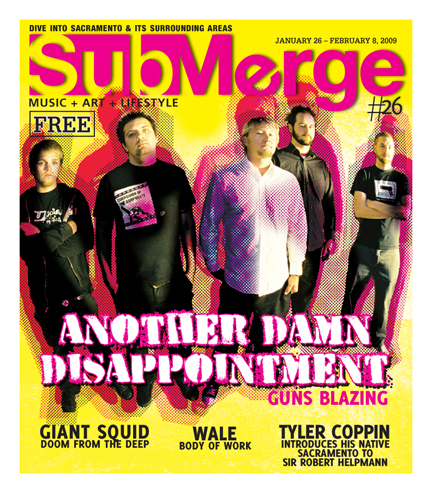