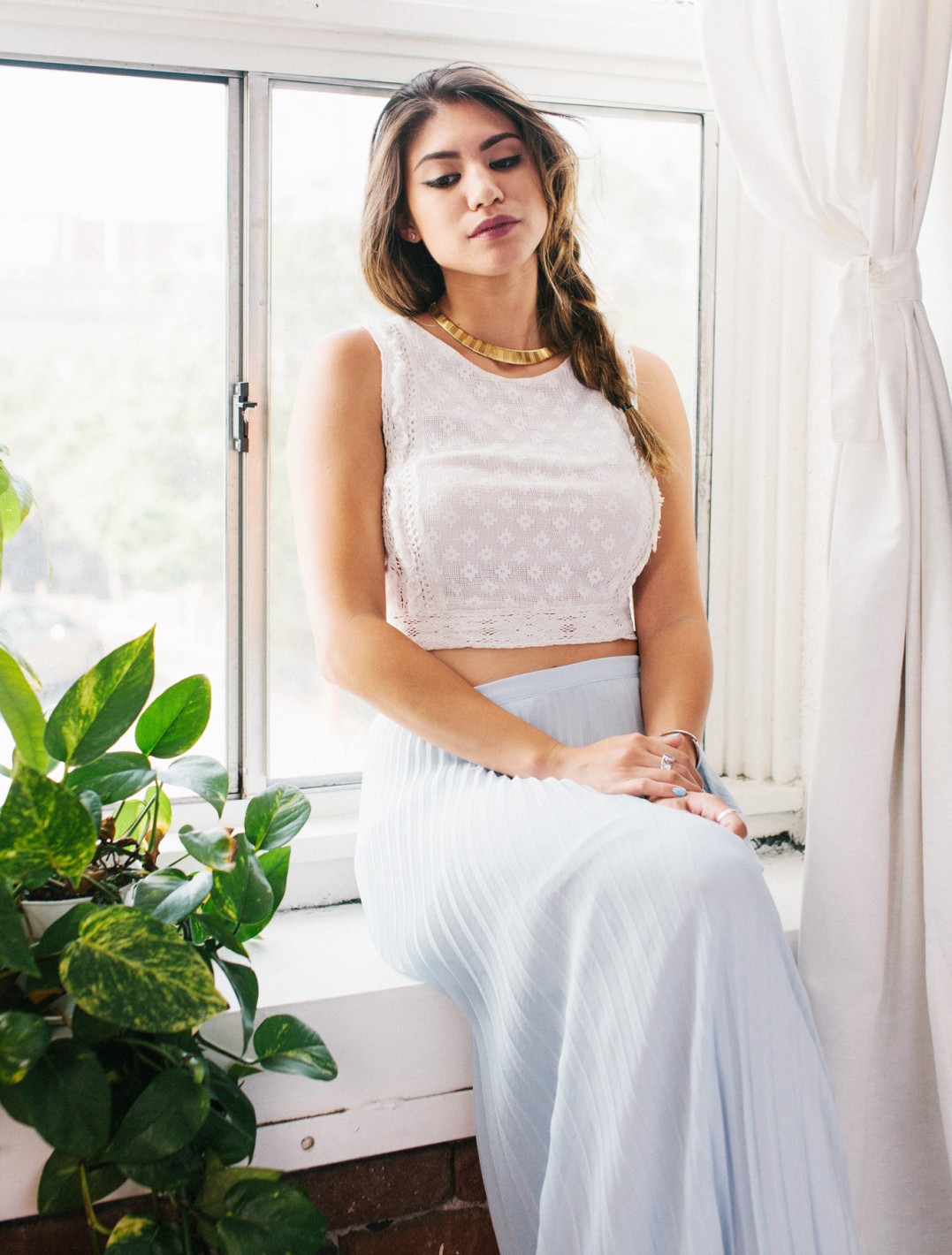 A rose by any other name may smell as sweet, but in the case of Astronautica’s new album Gemini, the name is exactly perfect. The album contains the ideal grooves for strapping on headphones and blasting through the stars, or—as the artist behind Astronautica, Edrina Martinez, recommends—listening to while “driving down the coast, chilling on a beach or in the desert somewhere drinking a beer or smoking a joint. Just going somewhere where you can take a break without any deadlines or anything and really chill.”

The bouncing single “Palm Springs” is bathed in a deep golden haze of washed-out dance parties by the pool, as the synths and the soft, love-struck vocals of Martinez slowly drift by. The drums are punchy and the resulting mix sounds like what would happen if Nosaj Thing and Emancipator conceived a musical love child while stoned in a planetarium.

Martinez is a Los Angeles native who discovered the notorious club Low End Theory at the ripe age of 18 and instantly fell in love. “Yeah I would go into the bathroom with these big black Xs on my hands and try to wash them off,” Martinez said. “But just being there was so different, like the sound was really big and you were packed in with all these people. You feel like you’re one with the music and the artist just because of the proximity.”

It wasn’t long before Martinez was learning Ableton mixing software through YouTube tutorials, using her guitar to make samples and coming up with something different from anything else coming out of the L.A. beat scene at the time. She put some songs up on her Soundcloud and was approached by Daddy Kev, founder of Low End Theory, to make an album. Then she was touring the United States, getting tweets from Tokimonsta and playing Coachella.

“Coachella was frickin’ crazy because I’ve been going since I was 14, so it was such a trip to be on the other side of everything,” she said, before going into her experiences from the second weekend at the festival’s Turn Down tent. “That was where everyone came down from whatever they were on; people laying down on blankets and massaging each other. I was like, man, I kinda want to be on that side again.”

However, it’ll likely be a long time before Martinez will be able to retire to the cuddle puddles considering the amount of jams she’s been able to produce in the few short years since posting her early demos on Soundcloud. She’s collaborated with and remixed a variety of different artists through the music collectives springing up around Low End Theory. Collaborating with JMSN for “How It’s Gonna Be,” and Bridge for “Velvet Morning,” Martinez showed that she could ground her music and make some slinky R&B bangers when she wanted to. Martinez grew up surrounded by hip-hop and purportedly the first song she ever sang was Snoop Dogg’s “Gin and Juice,” so it makes sense that there’s a little hint of pride when she talks about the collaborations.

But for Gemini, her second album, Martinez decided to go in a different direction. For about half of the album, she’s sampling her own voice, and writing her own lyrics instead of using other people’s samples.

“I think having that challenge and pushing myself made the album more exciting to me,” she said. “I wanted to make myself more vulnerable and put myself out there a little more.”

And there is a certain amount of intimacy in Gemini which is a bit harder to find in electronic music. Martinez describes the album as a love story; falling in love, falling out of love and falling in love again, like cyclical phases of the moon or the tides in the sea.

The hooks are breathy declarations like, “I’m not afraid / To fall in love again,” and “I still think of you / Do you still think of me?” They’re small, simple hooks, but they’re smooth. Yet for as ethereal and shimmering the songs can be, they’re still grounded in a setting that is very near and dear to Martinez: Palm Springs.

“It’s just a place where I can go away for the weekend and get away from everything and just hang out with the people I like and love the most.” Martinez said. “I love being in the desert, the poolside or whatever, the warmth of the sun. Palm Springs for me is just a very romantic place.”

For Martinez, Palm Springs is tied up with memories of leaving L.A. with her mother, or high school friends, or a boyfriend, and it was this universal feeling of love that she was trying to get across to the listener. Sadly, some fans have taken this sentiment too far, and like Lauren Mayberry of CHVRCHES, she’s had to shoot down some marriage proposals. 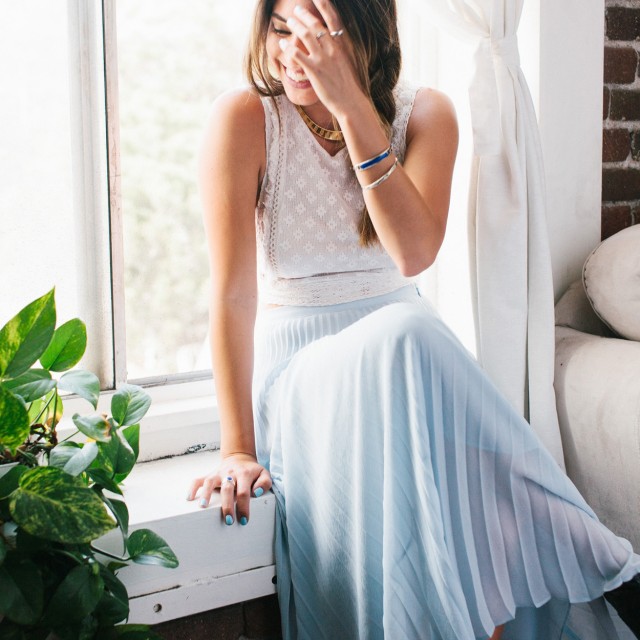 “For the most part I think fans are really respectful, but I remember that’s the question I’d be getting constantly on Tumblr,” she said. “Marriage proposals, yeah, those are real, they happen a lot. Then this other time I was on stage, and out of nowhere someone was like ‘Show us your tit!’ Like, just one?… I don’t know, I just try to focus on the music.”

Martinez went on to say that while she mostly just laughs it off now, she’ll get back to me after her upcoming tour if the cat-calling really begins to drive her crazy. But in the meantime, she’s getting back to the music. Martinez is currently designing an all-live show with new visuals and live instrumentation.

“I’m trying to play 100 percent all original music while still playing with the MIDI controller and the guitar. Navigating through those waters is exciting but definitely a journey. In my DJ set, I’m there to make people dance and whatnot, but for the live set it’s more just the vibes.”

Astronautica will be embarking on a tour of the west coast with fellow Alpha Pup Records bands and serving up those tasty vibes on June 19 at Sol Collective in Sacramento. Past that, Martinez is looking forward to touring Europe and presumably conquering the world after that.

“I wanna play anywhere, I think it’d be cool to play in Paris or something,” she said. “Maybe like a larger venue at night with a big DJ set, but then I also would want to play at the Philippines, or somewhere really tropical, and do like an outdoorsy day time thing as a live set with my guitar. I don’t know, can I get back to you on that?”

With the amount of buzz circulating around Astronautica, it seems like the sky is only the first stop for this young rocketeer.

Check out Astronautica as part of the Alpha Pup Summer Tour 2016 on June 19, 2016, at Sol Collective, located at 2574 21st St in Sacramento. This all-ages show kicks off at 9 p.m. and also features Gypsymamba, Elusive, Toy Light, Mr. Dibiase, Tel Cairo, Khmestri and more to be announced. Find more info online at Facebook.com/SolCollective.