Songs of Devotion: Baroness Forges a Strong Bond with an Ever-Growing Fan Base 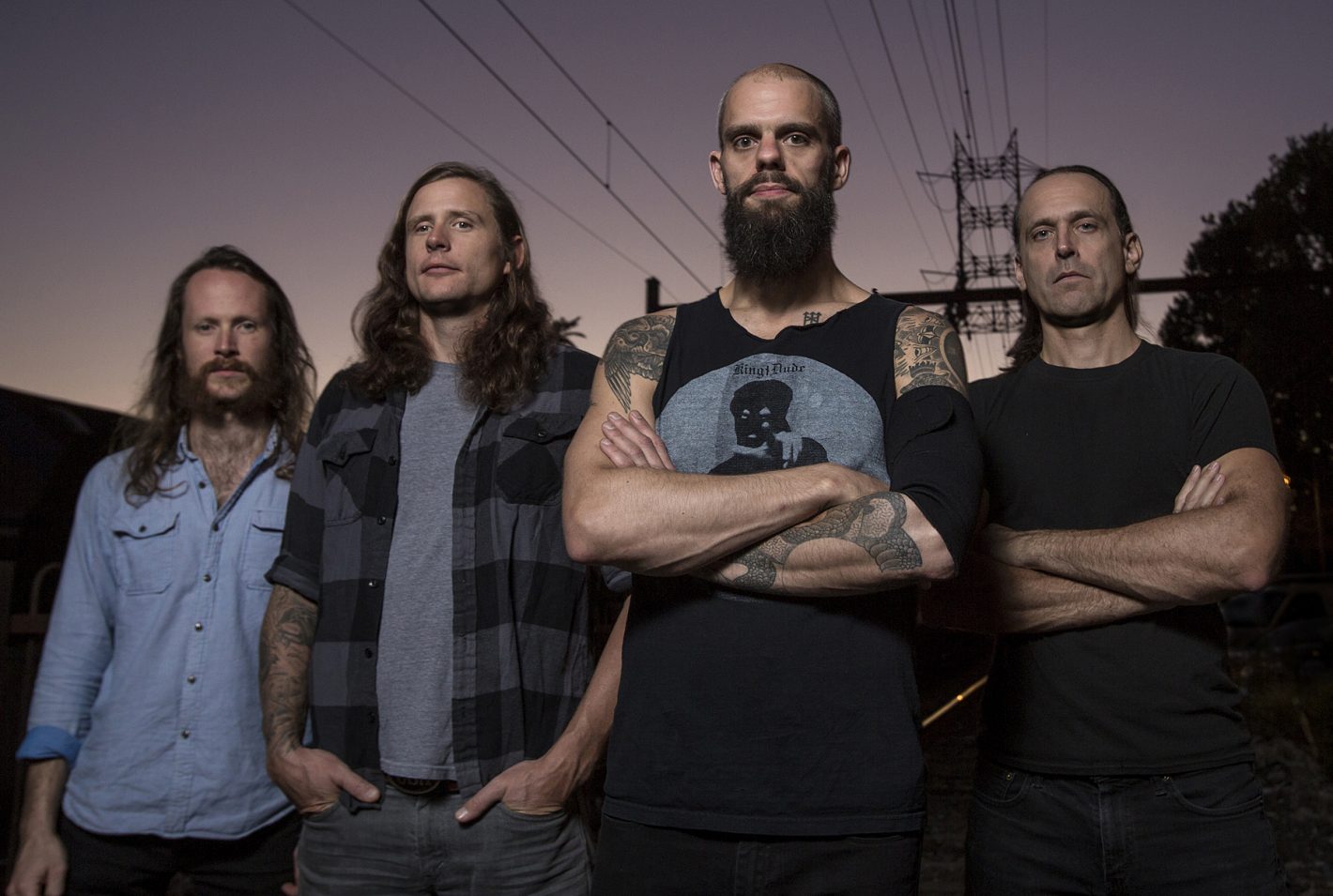 I should start this off by giving you full disclosure: Baroness has become one of my favorite bands … ever. I find it really difficult to be all impartial about them because their bludgeoning, yet beautifully melodic brand of progressive metal melts my face so damn hard.

As such, I was stoked to get to interview Baroness frontman John Baizley this past week. But, you know, there’s always a caveat when you speak to someone whose work you really admire: They could be a total jerk. Luckily for me, and a growing number of Baroness fans out there, Baizley’s a swell dude, and he even enjoys talking to fans like me.

The day after our interview, Baizley was set to appear at an exhibit of his artwork at The Convent, a new gallery in his hometown of Philadelphia, curated by his friend and Baroness’ roadie for nine years, artist Jeremy Hush. Baizley was looking forward to the event, not only to show off his intricate, somewhat mystical artwork, which has adorned the covers of each of Baroness’ albums, but also to get out and meet fans of the band and engage in meaningful dialogue.

“This is sort of a slightly embellished version of a thing that we do about every other day on tour,” Baizley says of the art show at The Convent. “It’s something that our tour manager Victoria [Zanghi] and I have been doing for a couple of years on tour now in an effort to connect with fans in a way that doesn’t put a price tag on meeting me or anything like that. There’s no obligation to buy anything, and I can interact with fans in the afternoon when it’s not a show night and it’s not 12:30, I’m not exhausted, and nobody’s completely wasted.”

Though the metal genre has been known to produce rock gods (a la Ozzy and Dio (R.I.P.)) who rightfully rule their frothing subjects from an elevated throne, Baizley says he likes that Baroness has been able to bridge the gap between performer and audience.

“Part of what we built our career on is having a kind of dialogue with our audience, sort of demystifying the separation that can happen when you’re on a gigantic stage with a microphone and you’re just louder than everybody else,” he says.

While they may be more egalitarian than their heavy music forebears, make no mistake: Baroness rules. The most recent evidence of this can be found in Purple, the band’s latest album and first on their own label, Abraxan Hymns, released in August 2015. In contrast to Yellow and Green, the band’s sprawling 2011 double album, Purple showcases the band at its most direct. It also introduces two new members into the fold, Nick Jost and Sebastian Thomson on bass and drums respectively, both of whom had a large impact on the band’s writing process.

“Half the band changed,” Baizley explains. “That’s two huge new variables. The way we were writing songs had altered, whether it was audible or not, it was a very different process. And we were releasing it under our own record label, so there were all these new variables that all these people were going to have to digest, ourselves included.”

Baroness also opted to enlist Dave Fridmann (The Flaming Lips and many others) as producer over John Congleton, who had produced the band’s previous two albums. But while some things changed, what remained was Baroness’ painstaking and stirring songwriting. In the following interview, Baizley discusses one of Purple’s most memorable songs as well as explains why the band enjoys playing festivals, like the upcoming Aftershock in Sacramento.

You’ve got the Monster Energy Rock Allegiance in Chester, Pennsylvania, on Saturday …
Yeah, whatever that is [laughs].

And you’ve got a couple festivals coming up, including the Aftershock in Sacramento …
And the lineup in Sacramento is so much better than the thing we’re doing this weekend.

Yeah, I know, you’ve got Tool headlining the day you’re playing.
Tool, Slayer, Primus, Meshuggah, yeah! Count me in … That’s a pretty good lineup. I wish that was happening this weekend.

Yeah, I didn’t want to say anything, but you seemed like a bit of a sore thumb at the Rock Allegiance thing—in a good way.
We’re a sore thumb on a lot of festivals, trust me.

You seem to play your share of festivals, though. Is that a live environment that the band enjoys, considering you like to connect to fans and stuff?
Yeah, if it’s work, bring it on. That’s why we do these things. They put us in a position where we’re out of our element, and we really have to rely on the quality of our music and the strength of our performance if we’re going to get any reaction. There’s nothing that terrifies me more than essentially playing for the same sized room every night, and the same sized crowd who already knows every word … Bring the chaos on. Put me somewhere I think I don’t want to be. That’s the real test of your mettle. You can really tell if you’re in an unfamiliar audience whether or not your songs are good, because a massive crowd listening to something for the first time, it’s such a great bullshit detector. They just pick up on what’s working and what’s not immediately, and you can see it. For better or worse, you can see it.

I got hip to your band at first because I got an email from a publicist about the Blue Record and I liked to cover artwork, so that made me want the check it out.
You’re not the first person to tell me that.

It was one of those instances where you could judge a book by its cover, because the artwork was amazing and the album blew me away. It’s one of the few albums I can listen to the whole way through and not realize I just sat down for however many minutes and listened to a whole album.
We really take great pains to make sure that that’s a possibility. In this era of music … and look, I can make an argument for both sides. There’s a lot of people who’d like to call it a loudness war, and there’s also the new length of CDs, which differs 200 percent from LPs. What gets released as an album now, in the ‘70s it would have been a double. What we want to do is create compelling works that suit the format that we grew up and we’re accustomed to―you know, a 40 to 45 minute thing. I think that’s as much as you can reasonably ask from somebody.

It’s funny you say that, because the Blue Record was a big success for the band, and you followed that up with an actual double album, Yellow and Green. Given what you just said, was it difficult decision to just say, “Screw it, we’re just going to put out this gigantic record?”
Yeah, so the place we were at mentally and musically during that period of time was a very productive time, but it also really saw us challenging what we thought of as our core sound and seeing if there was room to breathe there. So we wrote like 26 songs or something, and two albums of them were good enough to release. I think the concern with us was, “Well, if we just shelf the other half and wait to release them, they’re just going to fall by the wayside, because they may not be single album-worthy. They’re fresh for us now, so let’s just embrace how pretentious this idea can be.”

When you guys were breaking down what your core sound was, what came out of that discussion? What did you settle on and was it what you expected it to be?
I think what was the most curious thing to us was if we could write slightly different-style songs and keep the impact there, keep the vision of the band, which was intentionally designed to adapt and change over the years. But we wanted to see if we could reach a little further than was probably good for us and still find ourselves in the songs. That’s what that record is. When we got the masters back, I think all of us were starting to build up this great defence for the backlash we expected, which didn’t come nearly as vehemently as we thought it would. So all of my amazing defenses in terms of what we did and why we did it, I never got to use them. It’s an argument I made up but never got to have …

“Chlorine and Wine” is beautiful, and I think it’s the longest song on the album. I was wondering if you could talk about where that one came from.
That’s actually one of the most interesting songs on the album. I actually wrote the main riff for that song in the studio while we were recording Red back in 2006, so that riff is 10 years old. And I never forgot it. Whenever I’d tried to turn it into a song with prior lineups, there was just disconnect. Like, sure that’s a cool riff, but it doesn’t really work … [but] I showed it to Seb [Sebastian Thomson], and he just knew what to do with it … It’s one of those songs that if you strip everything away, there’s a really simple country song chord progression underneath it. It lent itself pretty well to lyrics and melody. In order to keep that song moving along, we had to create a bridge section that was really different from the first half of the song and then write an ending to it. For Purple, it’s the least standard songwriting in terms of structure and composition …

It’s funny that you mention that it’s a country chord progression …
A lot of our songs are.

Yeah, that’s something I think I’ve always picked up on. Your songs are complex and heavy, but they almost feel like folk songs, like something you’d sing at a campfire with an acoustic guitar.
One thing that I’d seen after 14 years of touring, I’ve been overwhelmed by those bands who had what I was calling the soccer stadium chant quality about them. Like, seeing Queen: Live at Wembley Stadium is a classic example: Everyone knows every word, because the words have been arranged in such a way that people connect with them, and the songs have enough space, enough breathing room that the audience can participate. And so I wanted to see if we were capable of songwriting at that level, and that song [“Chlorine and Wine”], every night, people started going ape-shit during the second half of that song. They didn’t even know the first couple of verses, but they know all the ending lines. It’s been really cool. The way I prefer to write songs is if it works on a piano or an acoustic guitar, if you can hack your way through it there, then you can add all the guitars and sound effects you want. Like I said, that just embellishes. That’s the easy part. Orchestrating is really easy if you’ve got a good song underneath it all.

See Baroness and a killer lineup of heavy rock acts at this year’s Aftershock Festival, held at Discovery Park in Sacramento on Oct. 22 and 23, 2016. To order tickets and check out the stacked two-day lineup, go to Aftershockconcert.com. 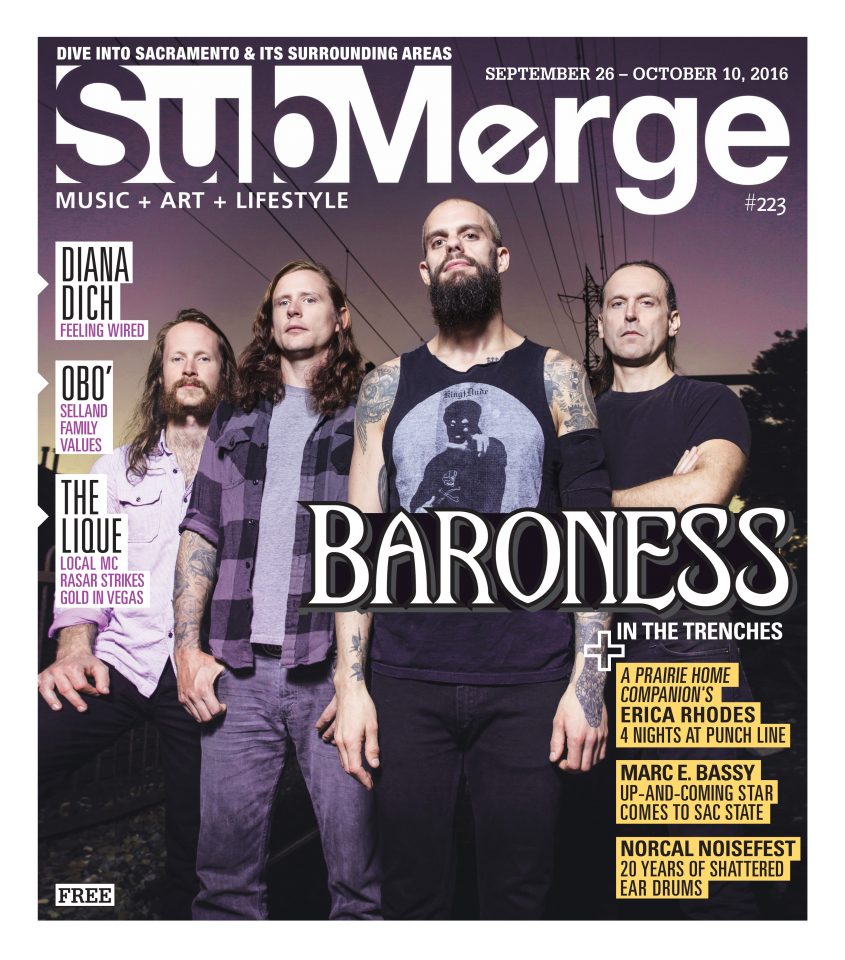