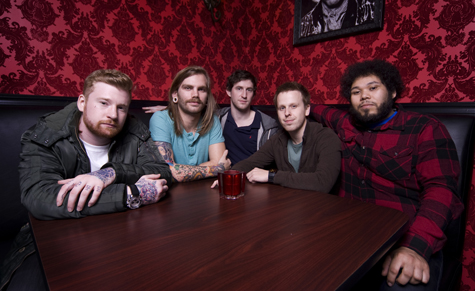 Considering everything Dance Gavin Dance has been through (or has put itself through, depending upon how you look at it), Downtown Battle Mountain II is a fitting title for the band’s latest album. Released March 8, 2011 it sees the band pick up where it left off after its arguably most successful effort, 2007’s Downtown Battle Mountain. Five of the band’s original members–guitarist Will Swan and drummer Matt Mingus welcomed back bassist Eric Lodge and powerhouse vocal duo Jon Mess and Jonny Craig in 2010–reunited to enter the studio late last year. Despite their years apart, DGD’s put forth similarly remarkable results as they had in the past, in more ways than one.

“Writing started in the fall of last year around September,” says vocalist Jon Mess from San Antonio, Texas, a day prior to the band’s scheduled performances at the 2011 South by Southwest Music Festival. “Prior to that, Will had already started writing new songs. All of November and December was the recording. Tracked drums, bass and guitar through all of November and some of December, and most of December was vocals. I was there for almost a month recording, so was Jonny.”

It may sound like things came together rather quickly. Mess didn’t rejoin the band until summer 2010. His arrival was quickly followed by a tour and soon after the recording process for Downtown Battle Mountain II began. However, for Mess, it seemed much more laid-back as compared to when the band hit the studio for Downtown Battle Mountain, which was recorded in just two weeks.

“On this one [the sequel], we had two months,” Mess explains. “Last time we were in this shitty hotel, and it was freezing cold. I think I was a little sick then, too. This time we were in this house, and we had all this time. It was a lot more relaxed and there wasn’t as much time pressure–at least for me. Jonny came off a tour with Emarosa, so he came in a little later, but it was way more relaxed than prior experiences.”

Life in DGD post-recording has been anything but laid-back. Controversy sprang up once again surrounding Craig’s substance abuse. This time around, he allegedly defrauded his fans by offering to sell his Mac Book to his Twitter followers. When checks were sent, and no laptops were received, the band was once again forced to play damage control. Craig was sent into a seven-day detox program, which he just recently emerged from. Mess spoke with Submerge about DGD’s seemingly perpetual state of turmoil and Downtown Battle Mountain II, which, despite the all the backstage hullabaloo, is perhaps the brightest post-hardcore gem the band has produced to date.

I caught your recent Fuel TV performance. How did that go for you?
I was sick when we did it, so I wasn’t too happy with it. It was in Los Angeles. It was right before our first show. That was interesting. We had a studio audience there cheering and stuff. It was fun, I guess. I tried to have fun even though I was sick.

Was that a different experience for you guys?
Yeah. I’d never done that before. That was awkward. We had to do the songs multiple times and they came in with different angles. Afterwards they were shooting a comedy special with a bunch of people from VH1’s Best Week Ever–those different panelist shows where they have different comedians talking about stuff. A bunch of those people were there doing some little skits, and they asked DGD to be the backing band and play a little jazz riff. I don’t know where people can see that. It might be on Fuel. We’ll probably announce that when we find out.

On the new album, did you and Jonny collaborate on lyrics or did you mostly write separately?
We talked about some themes, but it was mostly separate. A very small percentage of the lyrics go together. It was more of a scattered thing. That’s been our style since the beginning.

What sort of themes did you discuss? What were you personally trying to express on this record?
I like to write about all sorts of different things–snippets, fragments of ideas or dreams I have, various little stories. I kind of break them apart and put them together in different songs. One line might relate to another song later, so it’s not a cohesive body of material per song, more fragments of things that range from talking about food to being mad about something. Broad topics–nothing real specific. I don’t want to pigeonhole into having any limitations on what I want to write about it.

You and Jonny have radically different vocal styles, is that also the case lyrically, and is it difficult to get them to mesh from song to song? Is that something you work on closely together?
I think as long as the delivery is good, and you’re hitting the right notes and it’s flowing well, then the lyrical content doesn’t have to mesh in that sort of sense. First we go for the musicality–something that’s melodic or rhythmic or exciting in terms of phrasing and rhyming rather than we need to have these lyrics go together or we need a concept. That comes second.

There definitely seems to be a lot of hip-hop influence in your delivery this time around. You have this growling sort of rap cadence going on in a lot of the songs. Is that something you’ve been working on a lot on this record?
Yeah that’s definitely intended. I like all my parts to rhyme, and when I write them, I think of them as sort of a rap, like if you could rap that part, it would still fit. I’m not into so much the long, drawn-out, heavy screams over the entire thing. I’m more interested in trying to make it not necessarily as complicated as possible, but as unique and interesting that I can think of. It does come across it sounding like a rap because it pretty much is. It’s just a screamed voice rapping.

The record has gotten some good responses so far. Are you happy with the reviews or do you not bother reading those?
Yeah, I read the reviews. The one thing with some reviews is that people who write reviews are English majors, or they’re into writing and they’re not musicians themselves, so they sometimes clutter up the review with colorful verbiage or whatnot instead of actually giving content or criticizing or talking about different parts of the album. For the most part, it’s been good reviews, and I’ve liked what the people have said. Every review has something that I’ll read and I won’t understand how they perceive that about the album, but to each his own. I did watch this Youtube video of someone who hated the album, and his reasoning behind it, it was so funny because it was the antithesis of what Dance Gavin Dance is. The reasons he disliked everything was because, well, you really just don’t like what our band is about, not the album itself.

Jonny just got out of detox. How is everything going with that?
It’s going really well, actually, and I’m saying this as someone who’s not necessarily positive about the situation. He’s being really honest and real about it for once. It’s actually a little surprising to me. We’ll see how it keeps going. So far so good.

South by Southwest is basically a big party. Is that something you’re worried about as far as Jonny is concerned?
He’s doing Narcotics Anonymous. He’ll drink. He’s not getting wasted or anything, but if people are expecting him to not drink, I don’t think that’s what he’s doing currently. I’m assuming after this tour he could go into an actual 30-day program, which would be nice, instead of just a seven-day detox, because that’s not going to do it, obviously. Yeah, Austin’s going to be a huge party, but we’ve got our manager, label guy, all the people who are looking out for him are going to be there. I’m not saying we’re going to babysit him like a little kid, but at the same time we kind of are.

I read the interview you did with Alternative Press, and you later apologized to your old singer Kurt Travis and Jonny on Twitter for some of the comments you made. Given what you said that you’re not always the most positive about the situation, was it difficult for you to rejoin the band and get back into that frame of mind?
First off, that interview was a phone interview, and he relayed what I said in a sort of manner that wasn’t necessarily what I was saying. He asked me why Kurt got kicked out, and there was no real reason. I listed a bunch of reasons and he [the interviewer] picked the one about cigarettes… I said that Will and Matt said that, and then Will and Matt were like, “That’s not necessarily what we said. You spoke for us.” And I was like, “Sorry, I wasn’t trying to speak for you.” Me and Kurt are good friends, so I felt like saying, “Hey man, it came across incorrectly.” It made it look like I was divulging a story that wasn’t my business.

In regards to coming back, I was skeptical. Since I left the band, I reconnected with Jonny. We were skeptical of how the album would go down. We were just thinking, hopefully we’ll get the album recorded and see what happens from there. It wasn’t really a high-risk situation for me, because I could just do the record and if something went wrong, I could just go back to what I was doing before. There wasn’t really a lot to lose.

You mentioned the interviewer misconstrued what you said. Do you think that happens a lot regarding this band?
I think to an extent, yeah, and I think there are things that I said that I might not exactly feel, but I just said them at the time. I think that happens to everyone. It’s half and half. Some things get misconstrued, but that happens. Sometimes we feel optimistic about the situation, sometimes we feel pessimistic. If we were interviewed one day, there might be different responses. I’m not saying we’re bipolar or anything, just normal changes of emotions that people have. 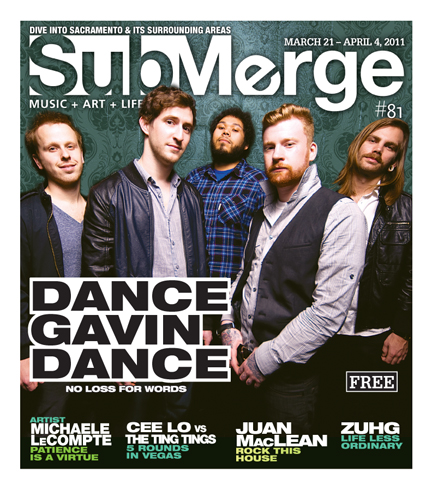 Dance Gavin Dance’s Downtown Battle Mountain II is available now through Rise Records. The band is also currently on a U.S. tour with I Wrestled a Bear Once, In Fear and Faith and others. The tour will bring DGD and company to Ace of Spades in Sacramento on April 8, 2011.