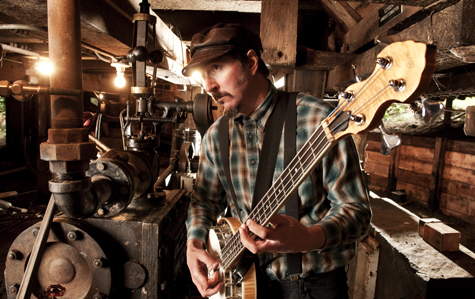 Les Claypool is a man of diverse—and some would say bizarre—tastes. Listening to the music he’s made over the years, be it with the band Primus, or now that he’s on his own, will reveal a strange brew of sounds that label owners, show promoters and even his peers have oft found difficult to categorize. Claypool’s music has been called thrash punk, progressive metal, funk rock, jam rock and everything in between. The frustrating part for those who are more comfortable with having music pigeonholed into specific scenes or genres isn’t that none of these descriptions fit, it’s that they all do.

Outside of music, Claypool has just as many different interests. The songwriter known for his character-driven songs has written a novel (South of the Pumphouse); wrote, directed and starred in a feature film, National Lampoon’s Electric Apricot: The Quest for Festeroo; and now is ready to release his first Pinot noir, Purple Pachyderm, under the Claypool Cellars wine label.

“We live in the wine country, so we figured it’d be cheaper if we just made our own,” Claypool says of his latest venture. “We made too much of it, so we’re selling it.”

He describes Purple Pachyderm as “fancy booze for not so fancy folks.” The wine is made exclusively from Russian River Pinot noir grapes and will be available in restaurants soon. Bottles will also be available shortly for general consumers, but Claypool says that with rising temperatures, the wine will not be able to be shipped until fall 2009. Known for his quirky sense of humor, Claypool says of his foray into the wine business, “It’s just something to keep me off the streets.”

Claypool’s music career has done an admirable job of that as well. His latest album, Of Fungi and Foe, is his second solo release, and his first album of all new material since 2006. The album contains songs he composed for the Mushroom Men video game for the Nintendo Wii as well as music for the Northern California-set horror film Pig Hunt.

He is also ready to once again take his music on the road, playing festivals and venues alike with artists such as Matisyahu and O’Death. In March, Claypool toured the U.S. as part of the first Oddity Faire, a tour dubbed as a “mutated mini-fest.” Claypool headlined and compiled the lineup, which featured DeVotcKa, Saul Williams and others as well as a host of circus performers. Claypool was pleased with the results, saying the tour did well, even though it took place “when no one else was doing well,” and he hopes to do a second Oddity Faire next year. Claypool reports that his summer shows—including his June 19 stop in Sacramento—won’t have a similar carnival atmosphere; however, show goers should know better than to expect any semblance of normalcy.
“My band will be just as freaky as it always is,” Claypool says.

Some of the music on Of Fungi and Foe is for a video game on the Wii called Mushroom Men. You’ve had songs you’ve written picked for video games before, but this is the first time you’ve composed new music for a game.
Yeah, this was me scoring to stills in a storyline. It’s sort of a creepy game. It’s a sci-fi game about a meteor or asteroid hitting the planet and bringing these mushroom spores to life, and they become intelligent beings and start forming all these little societies and battling each other. It’s a pretty cool little storyline.

Are there different challenges composing music for a video game? Of Fungi or Foe also contains songs you’d done for Pig Hunt. Do you have to get into the same headspace for both?
Video games are becoming—they’re not really even video games anymore. They’re interactive games. I anticipate that at some point, it won’t be linear media. We’ll have films that you’ll actually interact with, and the storylines in a lot of these games now are pretty intense. It was very much like scoring a film. The directors tend to be a little less opinionated, thought. They pretty much just let me do whatever I wanted on that one.

Is it easier for you to create without constrictions or would you rather have some kind of guidelines?
Most people tend to let me do whatever I want, because that’s just sort of the nature of the way I am. I think when people are hiring me, they know they’re getting something that’s further out of the box than most people. It’s not like I’ve done a ton of scoring, I’ve only done a couple of things, but even when I did the Robot Chicken thing or the South Park thing, they’re hiring me for my aesthetic. But I really enjoyed it, because it gives me a different jumping off point. It’s not me wandering around and saying that I’m going to write a song about a beaver or a fireman or a place or character. I’m being inspired by someone else’s imagery—someone else’s creativity.

One thing that has always struck me about your music is that your songs seem very character driven. Is that how you start a song? When you start writing, do you think up characters?
I’ve always been drawn toward music like that. Even as a kid, listening to the Beatles, my favorite songs had stories to them. I always wondered who the hell Rocky Raccoon was or “Maxwell’s Silver Hammer” and things like that. I’ve always really enjoyed that sort of thing. I always enjoyed songs that told some sort of tale, like “Amos Moses,” even musicals like Chitty Chitty Bang Bang, growing up with Disney—the old Disney. Even a lot of country music, which I was exposed to as a kid, there’s obviously a lot of folk tales within those songs. That’s what I’m drawn toward. I’m not one to write songs about drinking beers and chasing pussy, because that’s not really what I do [laughs]”¦ at least, not in a long time.

So you won’t be writing a hair metal album any time soon?
I don’t think it’s a matter of genre. It could be any type of genre. The lyrical content can be varied. There are plenty of metal bands, like Metallica back in the old days, told the tale of “The Thing That Should Not Be.” I don’t think party music is genre driven at all.

On the new album, you worked with Eugene Hutz. It seems like his vocals and your bass work would make an obvious connection. What was it like working with him, and how did you meet up?
Eugene has become a pretty good friend of mine. He had just come to the house to spend a few days. He was in-between tours, and he just came up to hang out. I have some friends from Poland who where over, and we just drank a lot. We ended up staying up all night. The next morning, getting up and going to the studio, I was going to do some recording, but we were so hung-over, I didn’t want to do any recording, so we just started drinking again. The next thing you know, we’re pushing buttons and recording a bunch of nonsense. I just picked the least nonsensical stuff and put it on the record.

You seem to have been accepted by a lot of different scenes. I have friends who are big punk rock fans, but they’ll have a few Primus albums in their collection—or hippie friends who are really into your music. Amongst your peers, do you have a lot of admirers across the spectrum?
It’s always been like that. Primus was that band, that back in the old days, we couldn’t find anyone to play with. Michael Bailey was one of our first supporters—he was a big agent for BGP and now Livenation, and I’ve known him since 1984 when he booked for Berkeley Square—and he always liked us, but he couldn’t find anyone for us to play with. We’ve played with”¦these bands that we had nothing to do with and weren’t anything like. Then along came the Chili Peppers and Fishbone, and all of a sudden, there were bands for us to play with when they came to town. We were always the band that you couldn’t really put your finger on what we were. They called us alternative, they called us progressive metal, they called us thrash punk—when we opened for U2, they called us a grunge band. There were all these different things that we don’t necessarily fit into, but we can slide in, in certain ways. That’s been good for my longevity, because I have friends who have been parts of scenes that have become very popular, and then when the scene goes away, so do they. Our audience has always been this potpourri of people. It’s always been this mixture.

Pig imagery has always seemed to surround your music. Are you going to address the swine flu thing in your music?
Am I going to address it? I’m trying to avoid it. I don’t know. I haven’t thought about it. As you’re telling me this, I’m looking at my ring—I’m wearing this ring with a pig face on it. I don’t know how pigs became so prevalent. It could be because when I was a kid—a very young kid—I became fascinated with the Pink Floyd pig. “Pigs” was my favorite Pink Floyd songs forever. It still might be, I don’t know. When I first started doing Frog Brigade, I said if I ever play with a keyboardist, I really want to play “Pigs.” So I had a keyboardist in Frog Brigade, and we learned “Pigs,” and I thought, well, shit, let’s learn the whole Animals record, and that’s how we did Animals in its entirety. I don’t know if that’s it, or just the convenience of having the Pork Soda record that opened the door to so much pig imagery. Pigs are kind of cool. I like pigs.

Les Claypool will play the Grove at the Radisson Hotel on June 19 along with Yard Dogs Road Show. 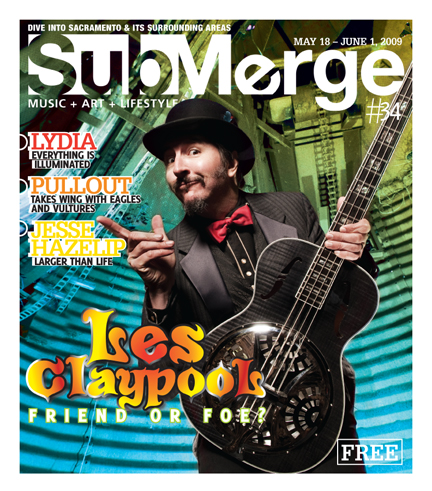